Known as "Ace" to his friends, Commander Acer Mazzard is a talented and Cosmically Attuned Battle Mage with a deep love of his family, children in general, and the Mordena. He commands a Special Forces unit consisting of talented mages with young children, meaning that while his unit is officially attached to the HMJ Relentless, they have largely been assigned to calmer defense missions to allow their families to accompany them.   Despite this arrangement Acer has been known to request the lead an assortment of high stakes efforts involving the rescue of children from unfortunate circumstances.

Daoff turned his attention to their Commander, a hook nosed gentleman with stern ice blue eyes. While his subordinates carried a full arsenal between them he stood unarmed, his only adornment a thick hinged belt of carefully crafted Starmetal. Void Mage.   Cursing under his breath, Daoff held his ground. "I am not leaving."
— Blood and Water

Commander Mazzard maintains an admirable physical fitness well suited for his role as a Void Mage within the Mordena Special Forces. He is also quite agile for a mage, preferring not to rely solely upon his magic.

Commander Mazzard is Cosmically Attuned, allowing him to borrow magical power from the stars or starmetal to augment the strength of his own spellwork. He uses this capability with devastating effectiveness.

While on duty Acer always wears a belt crafted of Starmetal, to ensure the highest level of preparedness when faced with any challenge. He needs no other armaments, although he is not against "borrowing" them from his opponents when the need arises.

The Void Mage Commander from the Embassy emerged from the doorway, a toddler wrapped around his left leg and a preteen hiding behind his right. "I, too, have a son," he answered Daoff's quizzical glance. "I'm sure he'd love to talk about the resources we have available here, if Jace is interested."
— Blood and Water

In addition to the Mordena, Acer maintains a close relationship with his wife and their son and daughter (Lisa). They follow him on his more peaceful postings, with his wife stepping in to assist with any organizational tasks required at their destination. Acer is the only one involved with the military services of the Mordena, and as a result is typically assigned to more relaxed postings focusing largely on defense rather than offense despite his skills at both.

Imposing and confident when the situation demands, and capable of commanding respect with his mere presence, Acer prefers a more relaxed demeanor when possible. He's particularly fond of children and will specifically request missions involving the rescue of minors, despite his usually comfortable postings guarding dignitaries and Mordena embassies.

While Acer and his family do not possess any pets of their own, his unit includes a small fylox pack which are treated as pets of the unit and their families when the animals are amenable to the arrangement.   He is the Captain of a Blade Dancing team, the Relentless Raiders, composed largely of members of his own Special Forces team. 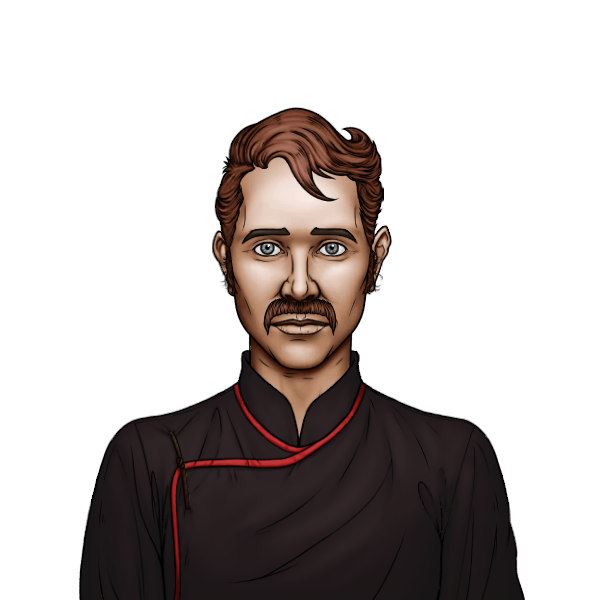 A father sets out to strike an impossible bargain in the hope of saving his family.

The fylox are predatory hunters native to the Mordena homeworld of Janikk. They are easily identified by their long slender legs, twin tails, and reptilian heads, and best known for their craftiness in problem solving.

I want him as my commander! What a great guy!

Acer is great. I am looking forward to writing more about him, although he does appear as a minor character in Blood and Water.