Loxira lays in ruins, the secret ambitions of the Space Defense Legion cracked open and laid to waste once again by my own cunning. I prepare now to walk their barren soil and relish their destruction, their just punishment for the crimes their bloodlust has wrought against my people. I am the purifying fire, and their souls will burn for their sins.
— Commodore Renkash Alenahs personal log, final record

The revered Sparnell Confederation war hero Vice Admiral Renkash is still celebrated to this day for his valiant death and unparalleled contributions to the Sparnelli war effort.

Renkash bore the typical muscular physique of a member of the Sparnell Armed Forces, although due to his position as a Void Mage this was not required. He found that physical exercise helped him to better direct his vengeance and his magic, not to mention his already imposing figure. If Renkash were considered to have a hobby outside of his efforts to destroy the Legion, it would be exercise. He even developed special tail exercises to allow its use as an extra limb for rudimentary tasks, including simple magic spells.

Alenahs bore the typical short dark gray fur and black stripes of the Renkash Katanoji. His hands and feet were larger than average but not unusually so, with slim fingers ideal for casting exacting magics. By the time of his death he was already showing the wrinkles and grayer fur of old age, despite his age and otherwise meticulous grooming and physical prowess.

If that damn cat is smiling at you, make yourself scarce.
— advice to new crew members

Renkash's gaunt, angular face always bore a scowl unless he was plotting something particularly nefarious. A spotting of white and gray fur above his nose extended to dissipate higher up his bridge, the only markings interrupting his black on black stripes. His piercing orange eyes were said to catch your soul in their gaze, and keep it there. Given his training in Necromancy it is unclear if this was meant in a literal or figurative sense.

Renkash had a close bond with his parents, who did not follow the typical Sparnell Confederation ideals. Rather than teaching him the importance of achievements and ambition at any cost Renkash learned to value family, relationships, and his own self-worth. These values did limit his friends and cause him to fall behind in his schoolwork as his more savage classmates would take advantage of his kindhearted and giving nature, but his parents' love and support provided the validation and acceptance he needed.

Shortly after Renkash turned fourteen a Space Defense Legion attack on his homeworld resulted in the decimation of large portions of the planet, including his home town of Wrencik. The death toll claimed most of the populace, including both of his parents. He survived only due to his parents' quick thinking, hiding him within a reinforced section of their home. It took him three days to dig himself out from the remains of their house. There had only been room for one.   He was sent to a government war orphanage on Sparnell where he developed a ruthless cunning, honing his newfound thirst for vengeance to survive. He spent the next year and a half refining his newfound skills before he was conscripted into the Sparnell Navy at the legal age of 16.

In the Military Renkash learned to further refine his newfound survival skills. Hardened by the relentless competition at the orphanage, Renkash's hatred of the SDL spurred him to excel in his training, rising through the ranks at exceptional speed. Renkash's Cosmic Attunement further propelled his meteoric success, earning him the status of Void Mage and personal sponsorship as an Oathbound of Admiral Kydell. This subsequently led to magical trainings in Shielding Magic and Necromantic Hyperjumping to better serve the fleet. He was not above using these skills for his own personal gain, both in self defense and the elimination of political rivals, catching the attention and approval of Sparnell Fleet Command.

None can best me at my own games. Not the SDL, and certainly not you. Be wise. I do not grant second chances.
— Commodore Renkash Alenahs to a rival

Renkash's career accelerated further without the calming presence of Harbia to curb his worst tendencies. His merciless attacks upon SDL forces and pitiless political maneuvering within the Sparnell Confederation meritocracy eventually earned him the rank of Commodore, and command of the armada flagship SCS Inevitable. The young Commodore amassed an impressive list of victories against both the SDL and various freehold planets whose resources were declared necessary to further the war efforts. He became the perfect weapon, a calculating strategist with a thirst for revenge and no limits to his ambition.

Sparnell Intelligence had identified the isolated planet of Loxira as a primary military target of unparalleled significance, an advanced shipyard and training ground for the development and training of SDL's next generation of soldiers. Destruction of the base would severely hinder the enemy's war efforts for the next generation, and possibly win the war all together.   Renkash demanded the privilege of commanding the attack fleet, and as few could meet his exemplary record his request was granted. The Commodore tackled the task with even greater relish and attention to detail than usual, mounting a full scale offensive less than a week after identification of the target. The SDL, caught unawares by the thorough and sudden attack, fought valiantly but were unable to stem the tide. The Sparnell Confederation had won.   Eager to experience the full scale of his victory, Renkash joined his away team to personally inspect the remains of their primary target. The team did not return, their last communication to the fleet a cryptic and garbled distress message from one of the enlisted. "We are under attack! ... Renkash is ... survivor ... I repeat! ... attacking us! Help!" It is presumed the team was cut down by survivors hiding within the ruins, while Renkash personally led the efforts to repel the attack. By the time reinforcements arrived a field of ash and the charred remains of the Commodore's personal electropistol were all that remained of the away team.   Resurrection attempts were unsuccessful.

Today we celebrate one of the best of our kind, the Black Death himself, Vice Admiral Renkash! May we all strive to follow his example of selfless patriotism and personal accomplishment!
— Official Sparnell Confederation Pronouncement

Posthumorously promoted after his death, along with the other missing members of his away team, Vice Admiral Renkash's legacy lives on in the hearts and histories of the Sparnell Confederation. His conscription date was declared a military holiday, typically celebrated by military parades across the capital planet Sparnell, and punctuated by the bombardment of an enemy planet or several throughout the course of the week.   The first Starkiller capital ship was also named in his honor, the SCS Renkash. This ship was later responsible for the death of Mordena's fearsome founder, Shane Lawrence, further adding to Renkash's legacy.

Augmented by his parents' homeschooling, Renkash attended the government schools of Yarva in his home town of Wrencik until it was decimated in an attack by the Space Defense Legion. Upon his transfer to the war orphanage on Sparnell his attention shifted to the skills required to survive his fellow orphans.   These talents earned a position at the Academy, where he learned the military and political tactical skills which he continued to improve throughout the rest of his life. Upon confirmation of his Cosmic Attunement he was also trained in Shielding Magic and Hyperjumping, as befitting a military Void Mage. Accustomed to solidary study, Renkash also pursued a deeper understanding of The Afterlife and Necromancy but his attempts to contact his parents elicited no reply. This only drove him deeper into his vengeance.

As a direct result of his experiences trapped within his own home after the bombing, Renkash developed a fear of enclosed spaces. This claustrophobia was exploited in his time at the orphanage, further traumatizing him until he resolved to always be the stronger, more terrifying person. Upon his training as a Void Mage Renkash learned to fight these fears by reaching for the necromantic planes, and later The Void itself, if he began to feel closed in.

Renkash developed a sharp political acumen and a biting wit as a survival mechanism during his time at the war orphanage on Sparnell. Over time he honed these skills to include the lessons he learned, both from the Academy and subsequent battle experiences but also from the tactics his fellow officers used against him to further their own careers. Renkash learned to take the actions of others to heart, analyzing and ruminating on them until he understood how he could use them to his own advantage, often against those who had used it on him. He learned to admire the achievements of others and respect his opponents, all while analyzing for his own opening to use those same strengths against them.

Renkash did catch the eye of many of his fellow officers while training at SAF Military Headquarters, of an assortment of species and genders, but preferred to focus on his studies and never accepted any offers. Most learned quickly to stay out of his way.

I suggested we should go out sometime, and you know what he told me? "We're already out." I told him I meant alone, just the two of us, to someplace private, and he said if I wanted to kill him I'd have to try harder than that. Nobody's worth that aggravation, no matter how sexy.
— frustrated romantic prospect 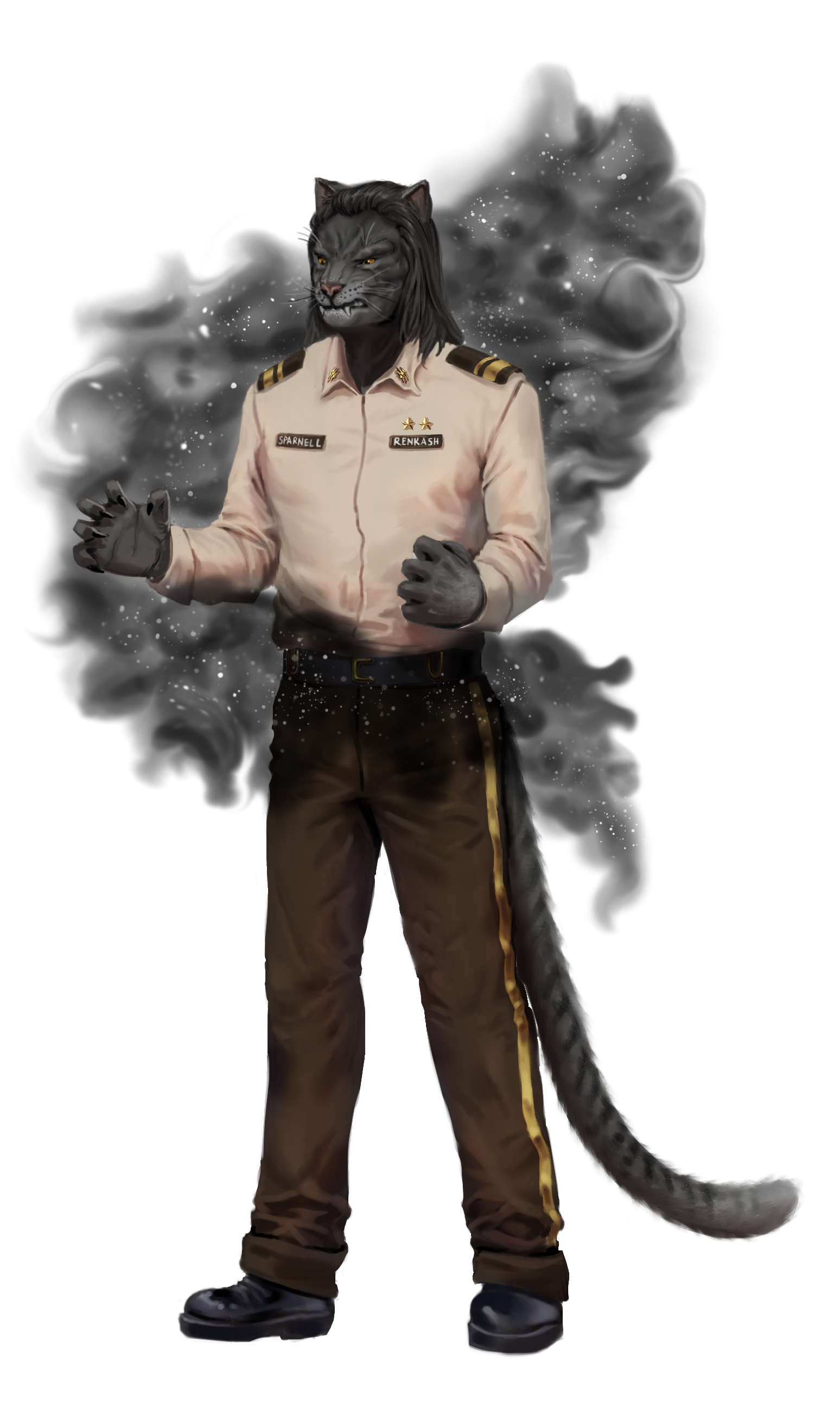 Our great hero, Vice Admiral Renkash Alenahs, has fallen in dedicated service to the great Sparnell Confederation, loyal to the very end. The Space Defense Legion will pay for their crimes, and suffer for his death a thousand fold.   Sparnell Fleet Command wishes to commemorate the Vice Admiral's service with a moment of reflection upon your own contributions to our great Federation, and how you can strive to better follow in his example. There is a void in our hearts, and our fleets, left by the absense of our patriotic hero. A hole which you, and your achievements, must strive to fill.
— Official Death Commemoration, Sparnell Fleet Command

The monolithic Space Defense Legion holds the forefront of non-magical technological achievement. They lead an insular existence, defending their territory from unauthorized incursion and rarely venturing openly outside their own borders.

*suspiciously squints at the garbled message and supposed death*   'If that damn cat is smiling at you, make yourself scarce.' This is my favourite quote.   Really interesting character. I really like how you can see how his past shaped him into the man he was.

Nothing to see here. *whistles*