Varitinera    Trenzar    Other      Stormchaser
A recently completed wooden merchant vessel that was moored nearby the Phantom Works shipyard awaiting its new crew. Unfortunately the owner and company were unexpectedly delayed by half a day on their way to collect it due to severe weather. 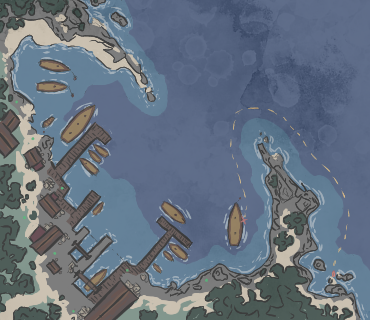 While having a drink with Vector at the The Rusty Anchor, Bas overhears the news from the local gossip. Hatching a plan to strike it rich, they gather five others to steal the ship while the darkness was still on their side. Two were sent to acquire an old dinghy that had been left forgotten at the edge of town, later carrying it through the woods to the out of sight rocky shore. Another two were made to gather necessary supplies.   The youngest of the group was given the important role of distracting the night watchman nearest the ship. Out of concern for the young individual's safety the worker escorted it back to the town where it met up with Vector. During this time Bas and the crew quietly rowed over to the boat boarding it. The out going tide aided in maneuvering it out of the harbor, a heavy fog that had rolled in covering their efforts. Vector and its charge made their way over to the cliffs, boarding the ship from above as it passed by. 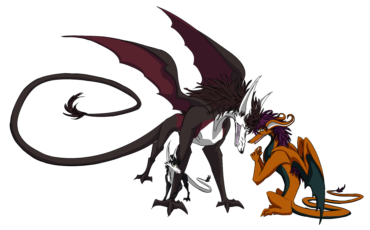 "You're telling me that not a single one of you noticed anything last night."   "Please, your Eminence, Light was at rest and with the heavy fog we couldn't even see the end of the docks."   -Phantom to dockhand

Avoiding direct conflicts, the pirates follow the chaos of battle taking advantage of the confusion to pillage wealth and supplies.   The ship often stays near the coast, only traveling across the ocean a few times a cycle particularly to avoid the winter in the north. The longer voyages require hiring additional temporary crew members allowing the sailors time to rest during the journey.

Parts of the ship have been converted to allow crew members to reside onboard for extended periods of time. Cabins were added below deck as well as a large galley.
Stormchaser
Open full size

It's propelled by fore-and-aft sails with a topsail on the foremast. During lulls in the wind the crew will have a Type W aid the ship along if nessesary.

The crew is armed with a variety of melee weapons. Any magically inclined individuals will use their abilities to attack and disable other vessels.

Type E crew members will absorb electrical attacks. The ship itself has a Wind Ward that is activated to help redirect wind and flame attacks.

That is one good looking map!

Map looks awesome. Possibly change the crew to a number instead of just re-listing the captain/owner. 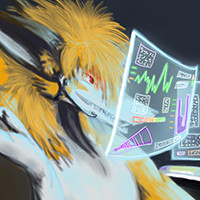 Thanks, I wish I could change that but it seems the crew section is being auto-generated from other articles. There doesn't seem to be an option to turn it off.

Wonderful read! I wonder, though, what is the ship made of, what did it do before it got stole, how did it get stolen? Just curious, but I would love to read more about it.   Keep up the good work! :D

Your feed back is very helpful. I'll attempt to get my thoughts together and update before the end of the challenge.

Great article and really nice map. I would be interested to learn more about its defenses and weapons. Besides the wind ward, what type of armor does it have?