The Sword of Ioshua is told of most in the Northern fables, but it makes its appearance in the Scriptures and many other stories as well. It is the blade wielded by Ioshua, who is one personhood of Vahan and is the wielder of the Sacred Heart. With this sword Ioshua and Tevil slew the Wurm Ishim, and they were also killed in the ensuing chaos. But, emerging from the underworld, Ioshua and Tevil restored their rightful place in the cosmos and saved all the Mundane Races of the world in a single strike. With the capture and then fall of Gendûet, the Age of the Elves ended and the Age of Man began. Once the realm of the Nelqorana was established, Ioshua and Tevil returned to Heaven, and Ioshua took his rightful seat among the gods at the right hand of Vahan.

There are hundreds, if not thousands, of rumors where the Sword of Ioshua may lay hid. Any relic of Ioshua is highly valued, but his sword is valued to the utmost. In stories, the sword is said to have been used by legendary kings, its great powers used to establish righteous kingdoms but only to, with those kings' deaths, vanish into the mysterious currents of life -- only to be refound by further greater kings. The sword is sometimes be said to be trapped in a stone, or anvil, or hidden in a lake. Other times the Sword of Ioshua is hidden by an immortal knight in some unknown church, guarded until a worthy person comes. In other regions the sword is wielded by a decaying statue in the desert, in others, it is buried in the bowels of the greatest tree in the jungle. Sometimes the Sword of Ioshua is in Faery, other times it is in a peasant's cottage. There are stories innumerable about this sword under tens of thousands of different names, and the Sword has tens of thousands of names as well. But the Blade's ultimate power and righteousness carried within are constants in these tales.

Probably the Sword of Ioshua had been taken up by the God-warrior when he entered into Heaven. But that bit of theological speculation will not halt the ever-growing mass of rumors. It used to be that, on occasion, there would be a Holy Hunt for the Sword, organized by a powerful kingdom, summoning the greatest knights of the realm to follow up on the cryptic words of some newly revealed wise-man. Today, with True Magic and Divination known to us, the Holy Hunts have ended. Yes, it is good that romances are inspired by the Sword. And far be it from the Church to discourage the peoples' hopes. But adventurers, though they seek where they may, should not expect anything more than hopes and tales.

In most stories, the Sword of Ioshua itself is a common sword forged by a blacksmith whose names varies depending on the story told. There was nothing precocious or different about the sword's forging. By all means, through the punishment the sword went through, it should've shattered long ago. Perhaps it was the hand that wielded it that meant the most. Anyways, most often Ioshua is simply said to have an 'iron sword', and not much else is stated. Importantly, though, the story most well known and spread the farthest is the tale of when Ioshua and Tevil were given two twin swords forged in the same fire by the Power Shpiel who is Seer while undergoing their resurrection. This story, while not focusing on the swords themselves, is an important one and expresses the unique place the symbol of the sword has in our religion.

The following is an excerpt of Dane's Epic of Holy Travels. His poem is a beautiful dramatization of the Holy Scriptures, and captures, correctly, the spirit of those times.

Contemplating His Wife as that Second Essence of love breathed forever by them both, the fate and sorrow of Matania Seer watches all that moves in mind and space with such perfection that to look upon it is to be seized by awe of intelligence.

Therefore, he — Ioshua of Action, she — Tevil of Voice, raise your eyes across the stony sphere. Turn with me to that point at which one motion and another cross at the forest front. Note how the centre stone rises up as do the planets on the fiery wheels. How they branch in the darkness: their form not all seen but still steady.

Now nature's wily gem, the Sun, who dashes across the sky with his own written will, and with his light measures the hours across the day, shall raise you up there. Note how you shine as if with heavenly light. I cannot guide you two anymore, it is Tevil who leads your climb from good to better, so that you may gaze on Matania and his wife to find your way on Earth. I stand farthest from you two so that I may take a peak, and now I am gone!

Tevil shining of majestic light led Ioshua who glowed only slightly less brightly. They stepped to the great stone pillar in front of the forest front and looked up to see a blissful figure breathing back and forth with every tug on a stringed instrument, and it was sorrow.

Tevil then spoke, "Splendours of living and transcendent light encircle us now and give us a living crown, with sweetest gems emblazoned, with silver that never tarnishes, with such lightness as to reduce our weight!"

And upon Tevil and Ioshua's heads flew two shining crowns. From heaven's courts they flew down, from Hod's mighty hands they were forged for the greatest servants.

Up on their brows shone sun-surpassing fire, and a path was revealed up the pillar rock side. And from within the blaze of the crowned fire they heard one say: "Since the ray of death, from which true love is kindled - and then by loving, in the loving heart - so then we give ye both light to light your way to Earth!"

So Tevil with Ioshua's hand in hand climbed the stone pillar along the majestic lit way to the top. Though the climb was treacherous, Ioshua laughed so that the blaze in his glad eyes pierced each other's mind and set them to peace. He said, "There is a clock tower that calls us from above, where the husband of Shpiel Mirror rises to sing his instrumental hymn to his sweet spouse, let us reach there."

So they climbed and reached Matania Seer of rain, sorrow, and fate, they then touched his cloak and he turned to them. As a reflection is to the source of light, so then was Matania's face to that of Shpiel and Ioshua, and they saw their grand doom.

So spoke the blessed flame Matania and said no more: "I am all today all that I used to be: I am Casal and Bonavate. I am Bagnoregio who in great priesthood rose to wise council. I am Illuminato who was an old prophet. I was the prophet Hugo, and the deathless glow of Mangiodre, and Peter too. I am all those slashes of true sight which few so easily perceive. Rabanus is also here: and here shines Calabriam abbot of Juraedon, whose soul was given power of prophecy.

"But above all is she that is here beside me: Shpiel is her name, wife by trade, lover to mine, power of snow, peace, and past. Look! she rides the untameable moon! I end my emulous and loving eulogy; speak to she. She holds the holy millstone. Speak to her in this lair of the Espiri, those frisky water spirits, those Necks. "

So then Tevil and Ioshua looked behind the playing Seer and saw a misty horse, black as night. Upon it was a naked woman with a harp in hand, and she rode so closely as to have the steed breathe on Ioshua's neck. Shpiel the Beautiful spoke then:

"Tell me of our children on Earth in these days. How many souls are in the flock? And which of them is worthy of high praise?"

"Scores upon scores, though beasts prey on them still." replied Tevil, "But none are worthy of praise. Only us two are worthy of mention, and Maldir of Waves."

"I tell you the truth," said Shpiel, "from the day when Gendûet sounded forth to rebellion, to that in which my mother, being heavy laden with me, gave me birth, to that moment of when you two died, the flame of the earthly hope has always been inside both of you and Maldir.

"All mankind's institutions, of every sort, have their own death, though in what long endures is hidden from you, your own eyes being very short. And as the circling of the lunar sphere covers and bears the shore with never a pause, so must you two return to Earth and kill the Serpent. Neither may have rest, go do your duty! The past must conclude!"

So shone the spirit of Shpiel that even Matania disappeared in the blaze. And a strain of music danced round the two so heavenly that neither had the power so much as to imagine it. And a voice came from the light: "Oh sacred pair whose work is so devout. The ardour of your love may guide you and keep you within that mundane sphere and save you from death. Take these swords forged in heat, and keep the crowns that will light your way; the Eternal Light give you strength as you fight the good fight!"

And Ioshua and Tevil found themselves in a flat field with not a village to be seen for miles around. The wind blew over the land and shook the grass. The high and final cry of the world, which was to be rendered in fire. 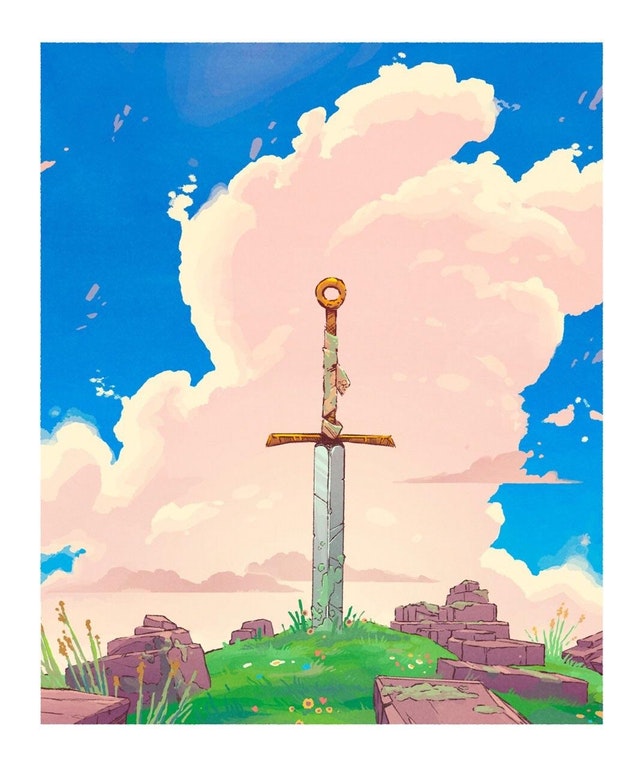