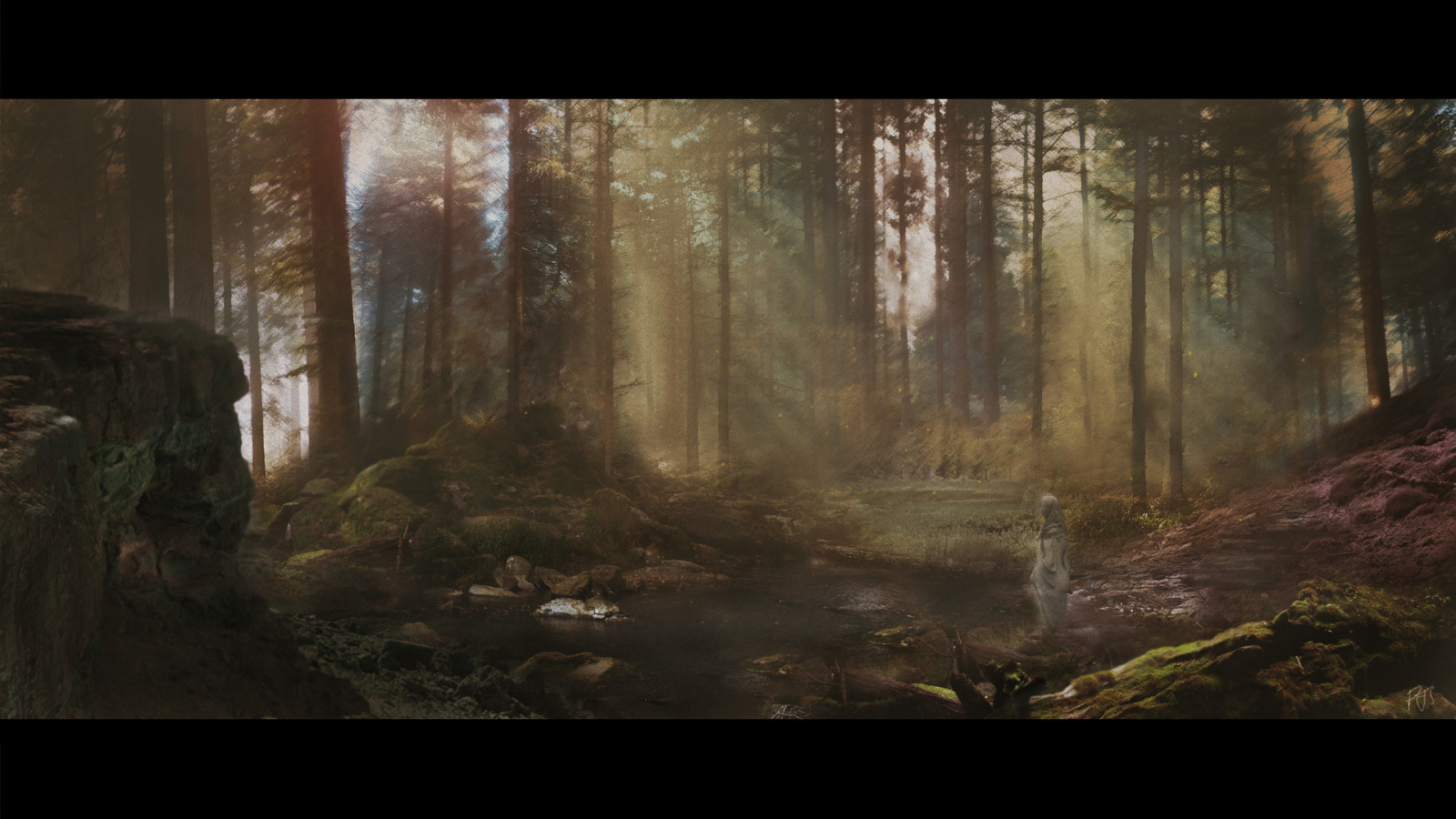 The events of the travels of the Novgroal-bound caravan as recalled by the girl Malxix are as follows:

After venturing out of the Palhiss weather fort with an only slightly longer than average caravan. Azmin Gêlıj, a high ranking ranger from Novgroal, was forced to stop the train many times. The first time, being the longest and caused by an indiscriminate mudslide that struck the core of the line.   It is unknown, but unlikely, if ranger Gêlıj perished in this first incident. But regardless, it is for certain that sections of this mountain caravan broke into smaller trains to travel smaller, lesser known foot paths, while others returned to Palhiss to deliver the news and fetch supplies and equipment for salvage.   With reasonable certainty; some of Novgroal rangers, particularly those of less experience, lead their groups through paths that were made by animals that would lead to their eventual confrontation. Or ones that were not foot paths at all and would lead to confusion moving forwards and backwards.   Some lone stragglers and ragged, bedraggled bands would eventually find their way to back to Palhiss or Novgroal; others still, would wander by chance into weather forts: Hisshiss, Bantigroal or Krullgroal.   Many people were never seen again, having been consumed by the soft earth or predators. As so far as the other fort rangers are concerned, the reason the Gêlıj train failed the way it did is attributed to it forced to break into smaller bands across many untried trails. Despite the ponders and objections of their non-ranger neighbours, they have considered the matter closed and consider further inquiries annoying.

Still within living memory, the story comes from the testimony of the train's only survivor. The then-girl Malxix of Palhiss, who was to become the bride slave of some waiting man in Novgroal, weaved a series of events that troubled the folks shortly after leaving and continued before and after crossing the summits and culminated to a small separated group getting loss, and eventually winding up on sauoomsae's north bank.   The story was (and still is by many) considered unbelievable by the many experts who traverse damp mountain routes. But later surveyors and rescuers would start uncovering bodies with various death scars within and without that seemingly would only be explained with Malxix's report.   Except, not everything quite fit perfectly.

Paddling river toiks initially found Malxix in the grip of a dead man and half-drowned in a shallow pool, herself. After collecting her story, they sent several expeditions to save whoever else they could, only able to retrieve a few bodies.

Even though is was their own kinsmen, the rangers of Palhiss were largely indifferent to what had happened. The rangers of Novgroal were much more involved in locating bodies and determining the mysterious cause for the disaster.   However, they were unable to come to any conclusion and as trade had been continuing since without incident on the same trail; Novgroal decided to drop the case as non-consequential.

The description of a sulfur spring on the eastern end of the Range raised great concerns over the safety of the passages there. Amateur adventurers took heed, but rangers and professional traders continued along the same old routes as they always had without incurring any extra risk.

When trains of caravans go over the narrow passes, they are usually headed by an experienced and important noble. The theory goes, that a squad of rangers were secretly dispatched to kill the caravan leader for some other political objective. With the rest now leaderless, they quickly stumbled through the canopy into ever more frightful disasters that ended the way it did.   However; other rangers, past ambassadors and truth seekers quickly reaffirm that there is always more than one seasoned traveler present during these trips like these all throughout the Range. To say nothing of those less experienced but still knowledgeable enough from past outings they would have done. Those conspiracy theorist attribute trade throughout the range's length as being the same as the valley, but caravan traders in the Northern Range are almost entirely rangers who know their surrounding forests.

The most notable feature in this story -such that it came to be known for it- is the supposed sulfur springs that suddenly opened beneath the earth and poisoned the majority of the convoy.   There is no shortage of debunkers to the sulfur springs:

An unusual amount of mudslides were also mentioned but there was no evidence of either increased activity nor of any greater than normal magnitudes.   Some have tried to reason that this is because the landslides were triggered by rival rangers aiming to kill each other while on route; accepting a high casualty count to cover for the deed.   But a more likely reason for this discrepancy is the young age of the witness as the apparent discrepancy in scale of a little person witnessing a traumatic event may seem to be bigger than it actually is.

Warg adventurers have gone to places far from their homes to seek honor, glory and plunder. Though it is not impossible that a roaming band could have journeyed undetected through the dense forests, it is unlikely that the parties involved would have sustained such minimal injuries if that were the case.   Studies of the recoverable bodies showed comparable traumas to one another:

The inconsistent and, at times, contrary information told about the doomed caravan has given rise to rumors of demons and wondering souls lurking along route taken.

In regular Toik fashion, they were immediately skeptical then dismissive and indifferent of the survivor's tale and her circumstances.

Being more expressive and outgoing than their mountain kin, these Toiks were the ones who found Malxix, nursed her to health and recorded her trials.

Malxixi would come to settle and marry several times in Mytenii by the Light wherein she would be continually praised and consequently reminded of her close calls with death.

Like the mountain toiks, the rangers are likewise disinterested in the girl's story. Ambassadors had and continue to maintain the non-existence of any sulfur springs where Malxix claimed; that theories of assassinations and warg sightings so far east were unsubstantiated; and evil spirits are the purview of valley priests and step shamans.

The survival of an eight-year-old Malxix, against all odds; and when stronger, sturdier men crumbled is a tale that intrigued many and celebritized her. She became the inspiration for many similar protagonists in adventurer songs or in slow tragedies to offer caution.

As Malxix grew out of her girlhood, she turned into a classically beautiful woman. Coupled with her famous tale, she was sought after as a wife by many rich merchants who specially purchased trinkets, painted vessels, stucco portraits, carved obsidian mirrors or tiny clay figurines of her likeness or exaggerations of her likeness within the vain of divinity.

Her favourite was of her eight-year-old self being snuggled comfortably within the bulb of a blue orchid and staring out back at her admirers.

Word of the doomed caravan eventually became the concern of a plethora of different people; not just for the number lost, but as well for implication with trade.

Ethnicity | Jun 29, 2020
— Took observations of the natural environment to determine the cause

excellent work my friend! you have a very interesting way of handling a transcript there. is that a table? ooof i commend you, though it is a bit long for the vignette. id suggest throwing it in the credit section to give it some room and prominance. the text is also a might bit large, shrinking it could save some space on the transcript. the last thing i noticed that could improve this already great article, is the sidebar. Adding some info to fill in that void on the screen can make this an eficcient and even better entry!   lets talk content!   i love how you separated and styled the entry overall. It never feels like you spend too much time talking about one subject. i love how the rangers investigate things. i mean they didnt seem to care in this case but its a nice idea for rangers overall! The variations and legacy of the case is fantastic. Excellent work man!

Thanks for your suggestions. You were right, they work better.

im quite glad it did! its no problem at all!