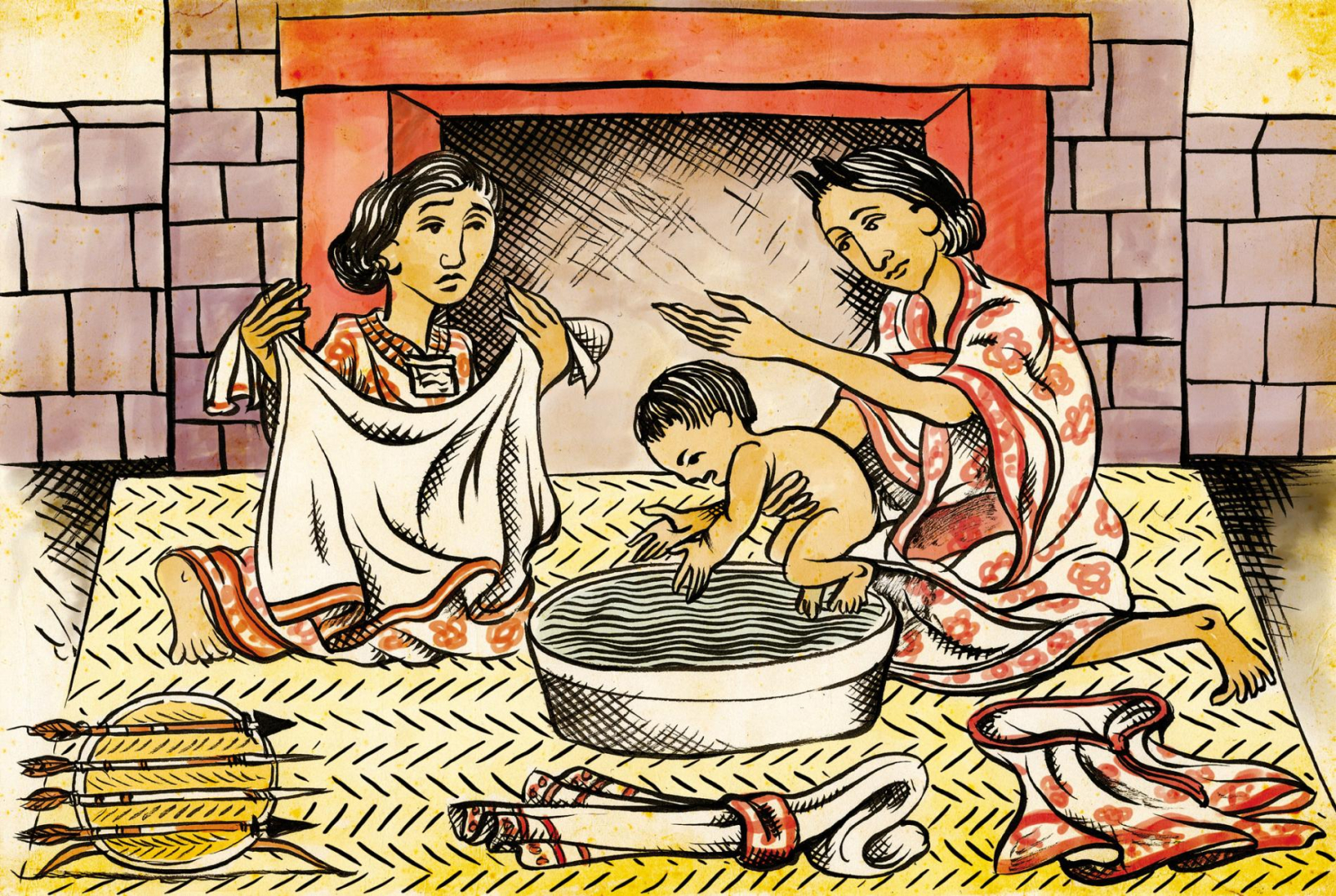 Document | Mar 30, 2021
A religious book containing all the combinations of calendar names that is commonly referenced during the naming ceremony.

Generic article | Jan 10, 2021
The sacred calendar shows the delicate equilibrium between the gods and is used for divination within the priesthood.

The mid-wife takes charge of the naming ceremony -when it came time for it- as the chief facilitator, offered rearing advice, oversaw medical care and ensured pre and post birth rituals. She greeted the newly delivered child as "the little captive", with war-cries and praising the panting mother for her warrior’s courage.

When the pregnant one already became aware of labor pains, it was said her moment of death had come to pass...
…and when the baby had arrived on earth, then the midwife shouted; she gave war cries, which meant that the woman had fought a good battle, had become a brave warrior, had taken a captive, had captured a baby.
— Mid-Wife Prayer

If there is a four day wait before the naming ceremony is to begin, the household would maintain the fires in until midwife deem otherwise. The father would also notify a priest to predict the fate of his child based on the birth date. If it was not to his liking, then he could convince or bribe a more fortuitous date.   After the birth, the mother was allowed time to readjust. After which, the couple would receive her relatives and neighbours who rub ashes on their own knees and elbows to "prevent lameness and aching in the baby".

During the naming ceremony, symbols of a certain profession are given to the infant. Miniature weapons such as shields, arrows, tools for wood, feather or metal work, and a scribe's implements are given to baby boys; and mini brooms, baskets and spindles to baby girls. These miniatures are shown to infants and explained to them, in order to prepare the child for their future duties.   Then a baby is given a name derived from both the calendar and a personal chosen by the parents.
Boys are traditionally named after animals or any names that described them, such as Hungry Turkey, Fire Coyote or He Who Laughs At Women.
Girl names are usually represented by a flower or something feminine such as Jade Doll or Precious Broken Plume.
The children would carry these names for protection during their most formative year until their seventh birthday, when they choose their adult names. The naming ceremony ends with grim speeches of the honest hardships of life, wishes for the child to be great and long life despite life's cruelties.

Naming the child did not always happen right away. Naming had to be on a "good day": a day said to have good luck. If there was a string of bad days on the calendar, the naming ceremony would be suspended until a day was considered good by the tlamatlquiticitl.

Remove these ads. Join the Worldbuilders Guild
Sang
In response to the prompt Tell us about a tradition surrounding births in one of your worldsl

Nice article. Little details on umbilical cord under the house so that daughters don't leave. Warriors being petitioned to carry a bag of cords from boys to a battlefield. Good stuff on the culture.