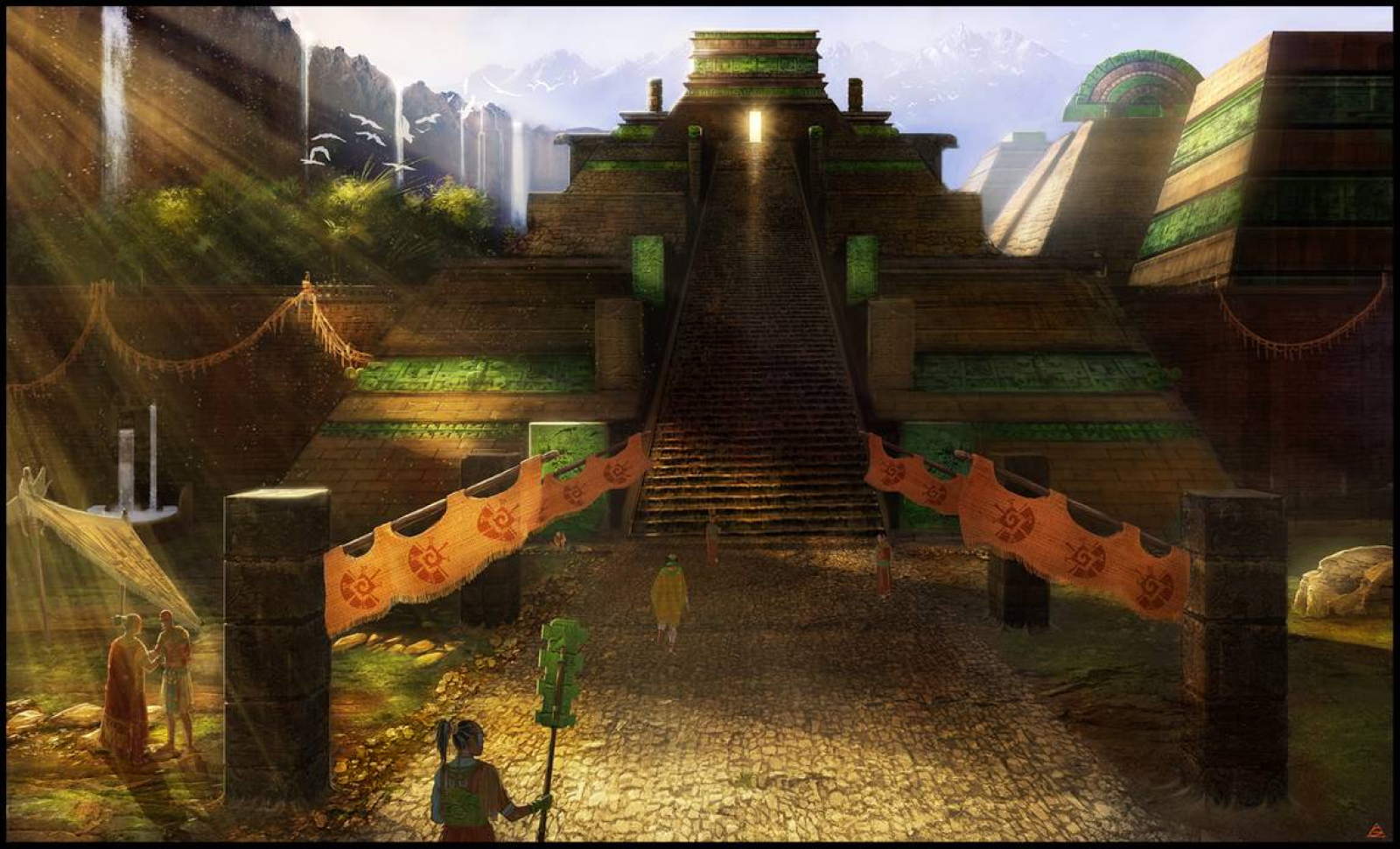 The primary purpose of the House of the Eagles is to be a sanctuary for the elite Eagle Knights to retreat between battles, to train in warfare tactics and perform sacred rituals.

A truncated pyramid of a building acting as sanctuary for the Eagle Warriors, for religious rites and initiations. It consists of one large rectangular room and another larger circular area with an opening in the wall between them, where a eagle statue stands. The walls and ceiling are covered in stucco and painted with murals.

There are three designed obstacle runs where members are expected to train weekly:

A zigzag path with open pots inlaid in the ground.

A circumferential and uneven course pitted with natural debris.

A circular structure with an entrance containing 33 steps, flanked by side struts and two jaguar sculptures facing the front plaza and covered in trophy skins. Inside, the upper rim of the entrance is symbolized by the open jaws of a serpent, complete with fangs, eyes and a forked tongue, painted red.

Openings in the walls and roofs allow streams of light during the day. Particularly at certain times of the year, such as at the solstices, are involved in religious ceremony.

It has become tradition for a select few, still in school, to be granted access for a week during Quecholli.

Rising Sang warriors who captured 3 warriors and were awarded their butterfly banner are oftentimes invited into the Cuauhcalli to tour the facilities and socialize with its members to persuade their joining.

Cuāuhtli are warriors ranked as Cuauhocelotl who had solidly chosen to become eagle knights.

The head of the Eagle Order, a general of the Sang army and defacto member of the emperor's Council of Four.

Positioned in the space between the rectangular and circular rooms is a giant posing bird whose crest backwards in the form of a chair where a herald might address his assemblage. A bowl is also carved into the bird's back to hold human hearts during sacrificial ceremonies, and draining channels that followed the stone feather traces to highlight its features during rites.

It began as a renovation project and then graduated to an initiation ritual whereby initiates contribute feathers from their own costumes. The Cuauhcalli's 'wings', as people like to call them, are wooden buttresses attached via muscle fibers but slanted on either side from the monolithic main building and anchored on the extreme ends of the compound.   Its frame is of multistage construction consisting of heavy woods on the ends weighted down further by granite blocks. Different woods are sectioned out and interconnected with lighter wood culminating into wraith wood at the highest point. Dragon feathers hook onto this brace, as well as a canvas that stretches under the arch, to appear as a pair of bird wings.

A conical thatched roof used to cover the main building, but the brilliance of its new wings drew unfavourable attention to its grey and dirty ceiling. So the decision was also made to swap dead leaves for colourful dragon feathers.

Consists of an inward-sloping surface called the talud, with a structure perpendicular to the ground sitting upon the slope called the tablero. To maintain the ingrained angles, those panels rest on crushed boulders, with gravel and sand filled in-between to form a solid, sturdy mass.