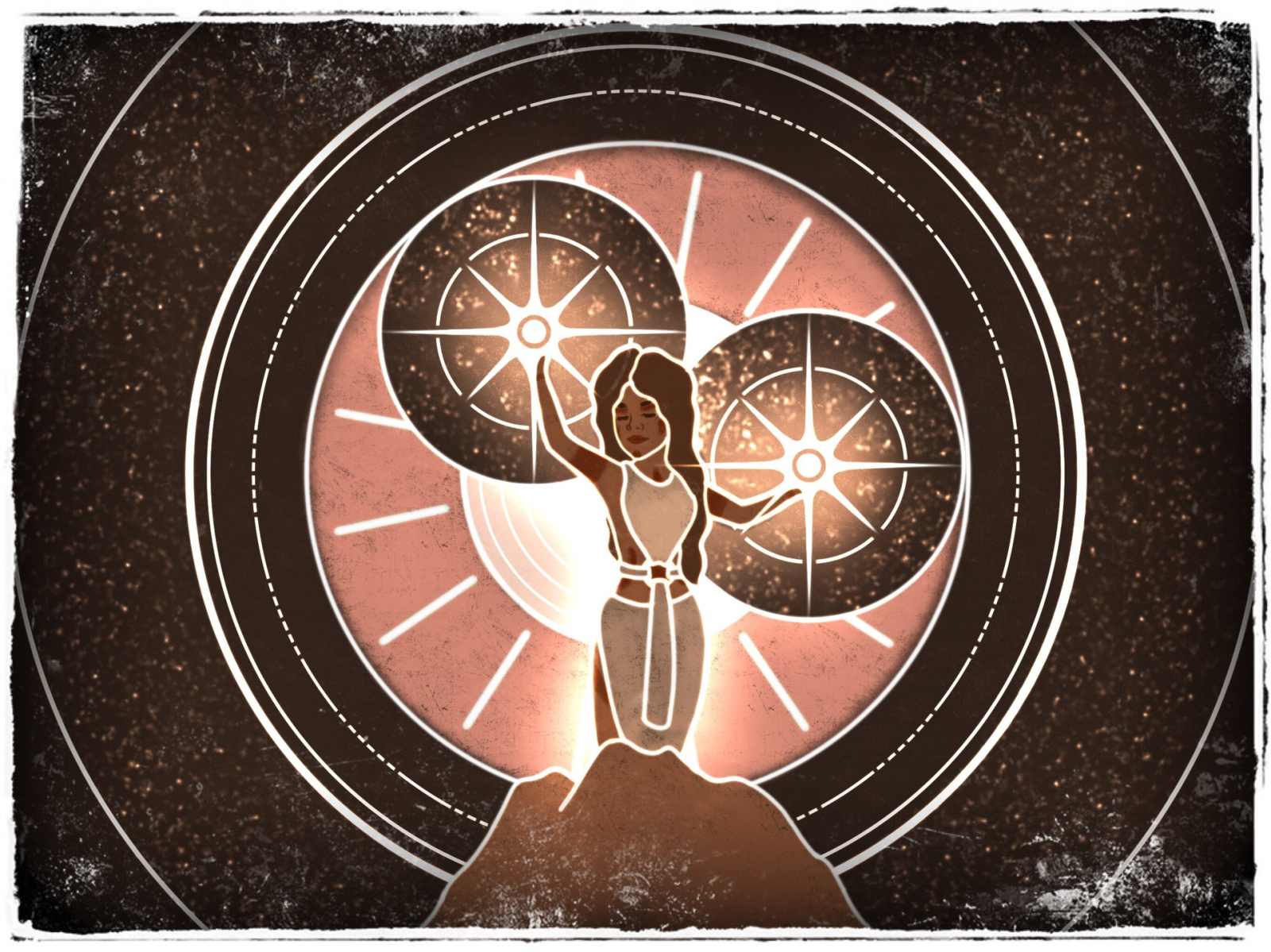 Between Sun and Shadow

With lilies in her air and a shape behind her   a blinding light moved slowly away   she looked to this light, then back to the shadow   and ran after the light   and her shadow followed     Sun called to her as he moved away   taking his light away   In the dark, she heard her shadow circled her   dawn came with the light   and as he came, fire caught     she ran and Shadow followed

This is the Swinger creation story which focuses on the mother of all people: the flower girl. It describes a growing girl from the age of seven, with a line of moths in her hair, and her shadow in the shape of a boy. In the darkness of the world, the boy shielded her from other shadows; but in the darkness of the world she saw no danger.   Every morning she became confused by and chased the rising sun and lost once again when it set. All the while Shadow followed, keeping her safe. For 52 sunrises, the goddess raced over the land to catch the sun until she had, in the process of following it, fallen off a cliff.   In the last moments of dawn, trapped in a ravine, she saw that, even though she had thought it had left her, her ever-faithful shadow had been following her even then, trying to offer a hand as she fell down. By the next sunrise Sun approached overhead, scorching the land towards her. Shadow embraced the girl goddess and in Sun's fire conceived the first race of people.

Confined to the semi-nomadic peoples in the Dry Bowl⁣⁣. Only the swingers' closest neighbours on either side of the canyon having any notion of the myth.

Storytellers try to spread the dominant tales revolving the flower girl through the Floodlands⁣⁣⁣' own Flower Girl⁣⁣⁣ who is described in much the same way as the swinger's girl goddess.   There is also confusion by outsiders hearing the tale. One, if the sun is meant to be the villain since he is a source of torment and an ambiguous means of creation, whereas other cultures venerate the sun as the source of life. Likewise, shadows are thought to hide secrets, but one is unambiguously her champion.   Finally, many children would ask, in some form or another, who was humanity's father: Sun or Shadow. The philosophical interpretation answered back would be that both contributed to humankind's spirit.

It is as much of a warning as it is a creation myth.

In this tale, the sun is every ideal. Everything good we aspire to achieve. Of the effort required of us and the peril of its pursuit.

In this tale, the girl is us. Our naivete in comparison to larger forces and how they can harm us and how we might luck into aid.

In this tale, the shadow is our reality. Whether we acknowledge it or not it will continually act on us.

The story is the root of the "Moth Ring" emblem: a symbol of universal balance depicting Sun, Shadow and a little child figure on their own path. Unlike other religious representations of the cosmos, the Ring is meant to collapse, as it is believed that only when things are unbalanced, can life be created.