It was a brilliantly bright day. Bai Sai's sun weaved its rays though the multi-coloured weave walls of the normal homes and market stalls; and cloth roofs waved the small child over as they often did on windy days.   It was always a windy day on Bai Sai. Bai Sai was a texturally soft and seasonal place, built up-on-high hilly mountain peaks, and overlooking the shorter pint peaks amidst the path of the Rolling Sea.   Divas, Fan wavers, Carriers and the Home Matriarch paraded along the widest bridge with Chy in the center. From there, the mountain spires would part ways for the sea and Chy would reflect on the seaward side of that very bridge as either part of her noon rituals or morning play. Under the face-like facades of hanging homes, above their spot; watching as look-out guards do alongside the travelers’ children. Hanging trees clutched below them off the sheer cliff face waiting to pull any wicked children over.

The population in Bai Sai is rotational. A core of maintenance workers, between 300 to 500, stay on year round (enduring the storm battering during hurricane season) to ensure it is livable for the influx of people from the fourteen weather forts at the start of the dry season. At which point the population balloons to 2000 Ranger supervisors, guards, servants, labourers and vacationing families.

There is no real authority in Bai Sai for most of the year. The head of the workers is usually thought of as the default leader when there is no one else present. But when the Rangers undertake their yearly pilgrimage, an impromptu 28 member council of the highest society rangers representing their own respective Forts.

Bai Sai is dam near unassailable. It was built atop a short series of flat mountain tops connected via vine and fiber bridges that can be disengaged at any time.
— Ranger Strategist

Simple rope bridges made of grass and vines woven into large bundles to cross over canyons, gorges, rivers and connect mountain peaks, caprocks and carved out caves. It is the job of the workers left in Bai Sai to roll up the bridges and replace the cables every year as part of their responsibilities to ensure it is strong enough to bear high traffic when the population increases.

From where the workers walk out of Bai Sai to their daily tasks, their areas of High Forest rests on an easy 30 degree gradient. Moving further and further away from the settlement limits, the gradient becomes steeper and steeper until it becomes a near vertical drop over the Shadow Realms.

On a far mountain top, that oversees where the Storm Straits meets the Pearl Sea, grows a forest that hides a special mold which can be put into a fermentation process involving time and clay vats dug into the open earth. The scattered fish, dredged from the far seas and thrown so high in the hurricane storms, give nutrients to the ugly looking molds and are a part of the sludge during fermentation.

The wild game to be found outside the base are the small monkeys and birds of the forests. Traps are laid out by the permanent workers as means of sustaining themselves. It is otherwise forbidden for anyone else to hunt in the forest for fear of disturbing the mold growth.

There are winding dirt paths that lead from the top of Bai Sai to the bottom of the merrows, where fishers catch and deliver various fish, lobsters, seaweed, prawns, shrimp and the occasional finkin to feed the city.

The rare hard and flat grounds on the site that are usually passed over for communal meeting plazas open to the sky. Plaza grounds in this temporary-permanent settlement are of the few places that can comfortably accommodate groups of important people coming from the different weather forts, so more attention is given to its appearance. If a potential plaza site is rocky, then it is filled in where necessary and the surface polished with fish oil. If it is naturally patches of dirt and grass, then it is laid over with cobble stones. 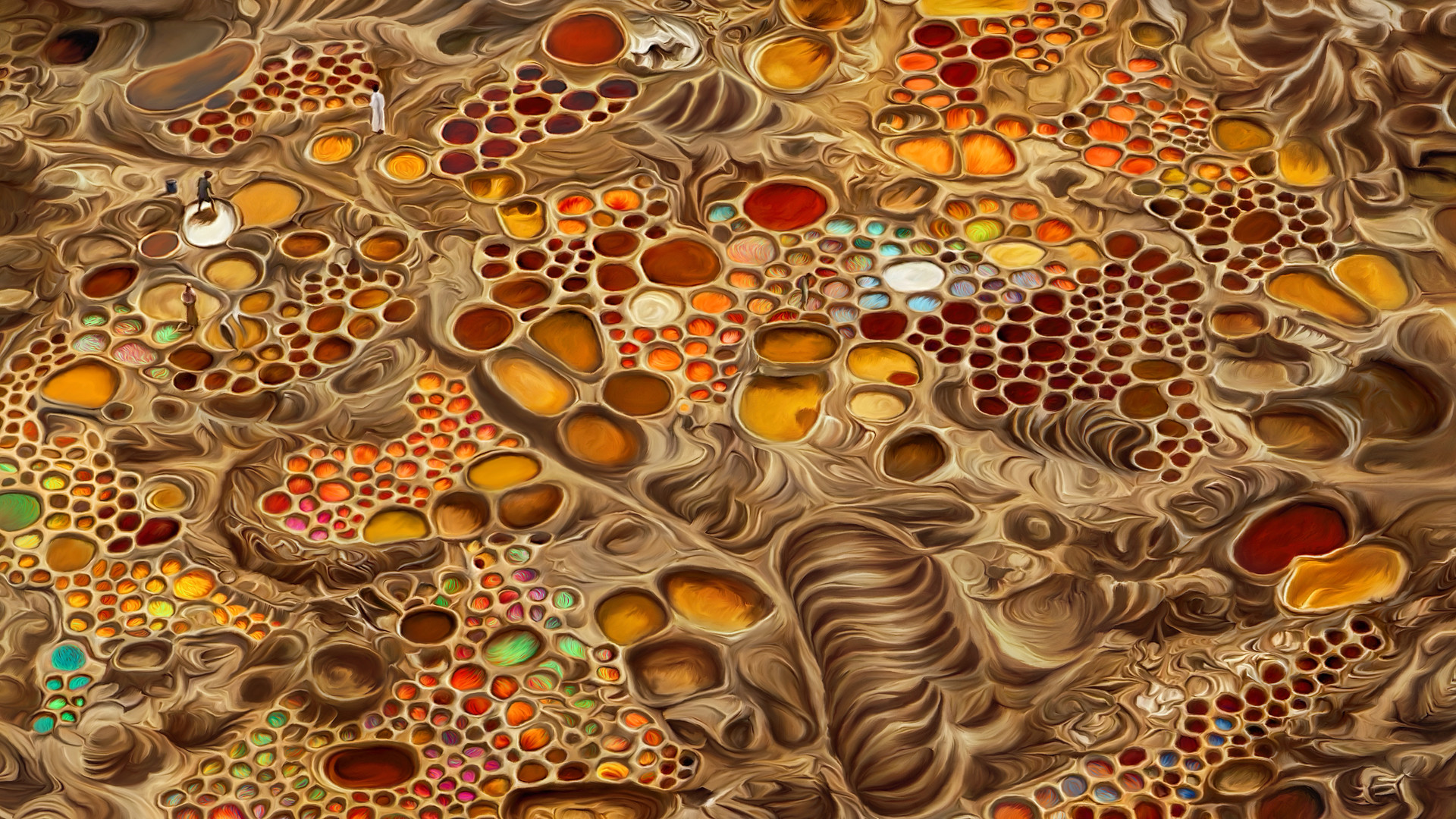 Teguidda n Tessoumt by exobiology
Come rain or shine, the labourers earn most of their salary through the repairing and expansion of the colour pits that are established deeper into the mountain forest. Here, the residues and secretions from different forest molds that grows plentifully around them after the hurricane season are deposited. The mold is put in the pits and allowed to ferment whereby they change colour from red to orange to yellow, purple to brown to black and green to light blue to white.

The divas are a group of isolated religious priestesses, typically the daughters of Bai Sai's working class, who live and have lived in the city year round. The rangers offer token reverence during the yearly migration as an easy means of encouraging the permanent denizen to stay and continue on with their jobs.   Divas often take advantage of the excesses of dyes produced every year to coat themselves in a single colour to denote responsibility. It is unclear to outsiders or to those not of high birth; as to whether or not the divas have express permission to use these colours in such a wasteful way. This is but one example that shows the level of contention between the priestesses and the nobles during the visits.

These are the experts who arrive with the leader rangers to take over the operations of the Pit, city maintenance and marine extraction from the regular staff.

For those nobles and rich families with vested interest in the unique industries in the outpost and desire to monitor their endevours in person.

Bai Sai means "City made of Ropes". Poetics like to re-translate that into "City of the Cloth". Either fittingly describes the cascades of multi-coloured settlement draped over the mountain at the heights of summer. This is due to the humble homes being weaved on mass and shipped to Bai Sai's great heights for customization and installation.

Nearly all habitations are semi-permanent tents that can be folded and stored when there are not as many people in need of them. There are designated areas regulated to residences, market stalls and places of worship that use the humble home plan to shelter the people and their possessions.

Bai Sai flaps about on top a mountain overlooking the Sinking Remnants. There are a few freshwater ponds and streams off the periphery and two or three larger waterfalls below the cliff where the cloth town rests.

The outpost is completely surrounded by forests and sky and remnant's shores below.   Fish, crabs and other marine life: constitutes the diet that sustains Bai Sai's residents.   Forest molds: grows on the trees, rocks and creeks of the high forest that is used to ferment it famous and profitable dyes.

Answering: "Describe an isolated or frontier settlement and how it survives in your world."
Visit hughpierre's Competition Page Check all other answers to this prompt Competition Homepage