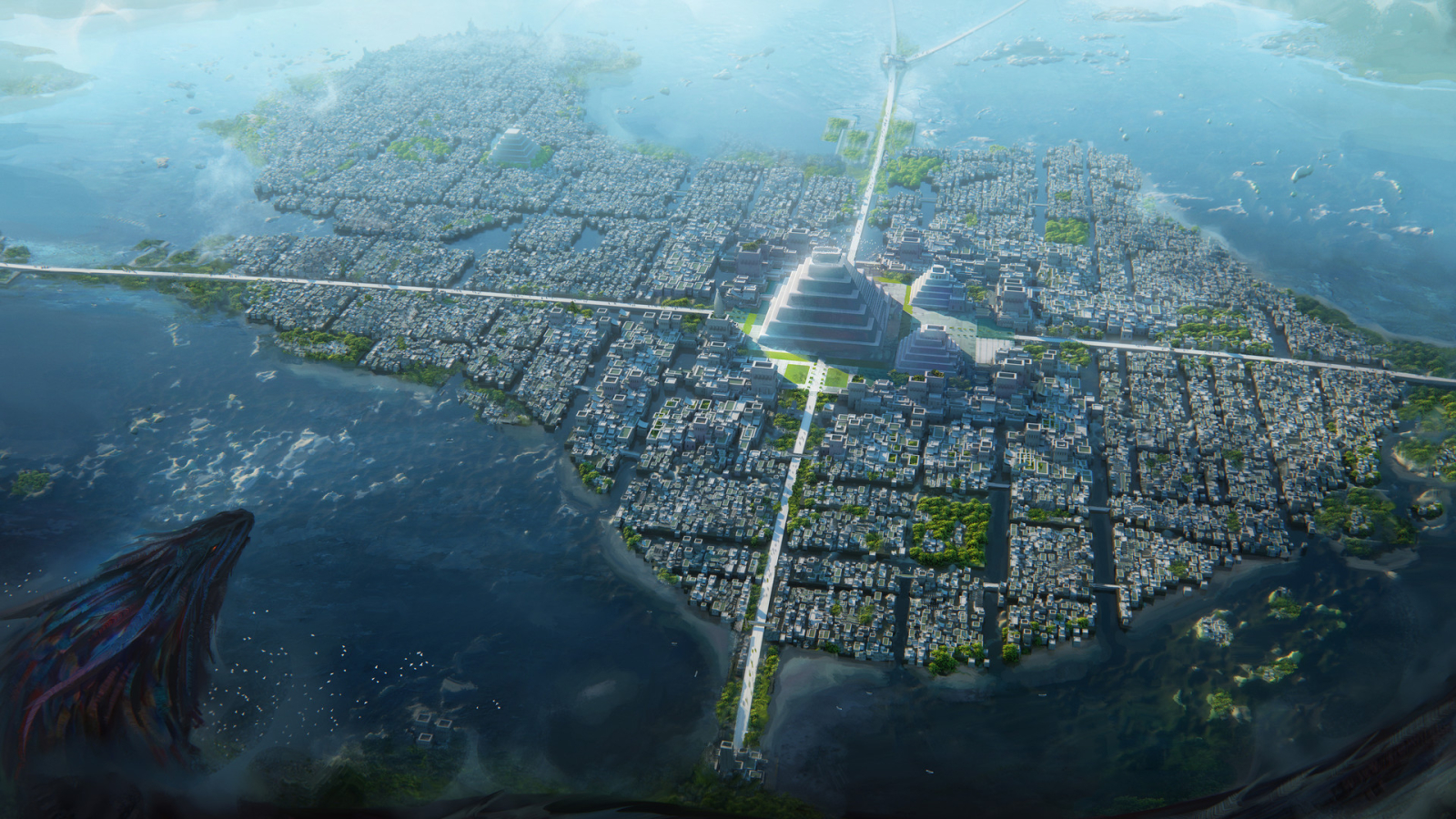 Every calpōlli is managed by three sets of sang nobles who form part of the campa nobility. They are instructed to form many councils within their own districts with varied responsibilities to different administrative sectors towards the daily logistics of the citizenry. Among the far flung nobles themselves, arrangements are usually made to send the most capable in the campa to go and represent them in the Sacred Precinct.

Sangsalgu Proper is a rather open city, with just the snake wall undulating around the Sacred Precinct and well-within the surrounding four campas and twice a man’s height.

Canals that doubly act as water roads to allow people to easily travel around the large city in boats and encumber the path of invaders.

As a means of speeding along trade and being defense ready, many removable wooden bridges litter the trail of major roads, particularly, of Nozwa, Coyot, and Tesh that circle around the entire city proper.

Atzacualco is further subdivided into three neighbourhoods, or calpōlli, whose inhabitants are collectively responsible for different organizational and religious tasks in relation to the larger city.

Co-located besides the four main streets and three main causeways, to deliver the city’s fresh water from distant springs via paired ducts lined with terracotta bricks. This allowed for continuous water flow, as maintenance can be made on one pipe while the other carries on.

Sangsalgu’s causeways are raised roads that allow the people to easily travel over the swampy and wet areas of the area. There were three major causeways that led from the island city to the mainland. Tacuba is a long but crookedy walkway connecting Atzacualco on one end to Tenula on the other. Nozwa, Coyot, and Tesh are the major roads that circle around the entire city proper and connect to the other causeways.   There are also many removable wooden bridges built into the stone causeways that allow for small boats and canoes to travel through them. These bridges can also be removed when the city is being attacked to slow down or trap enemies. The Sang also built many canals throughout the city. The canals act like water roads that allow people to easily travel around the large city in boats.

Nestled within the first settled part of the city; it is the main marketplace where up to 40,000 people would visit during feast days to buy goods and food for celebrations. The old market has many restaurants, art galleries and upscale shopping. The area retains a brick paved and covered sidewalks in some areas along the canals. It is not uncommon to see a variety of street performers, artists, and other vendors.

House of the Jaguar

Headquarters of the jaguar warriors is the former temple to the three-headed cat God. First among the four military societies devoted to protecting the Sang.

Mounds of floating land anchored in place by reeds, vines or narrow woody plants. They are productive for growing crops and expanding livable areas. The most important crop grown on chinampas are maize, squash, and beans. These three crops are planted together since they keep the nutrients in the soil. It is the government's policy to store 15 months' worth of nutritional crops surplus every year in the event of a siege or to trade for other goods as they get closer to their expiration.

A delegation of 200 nobles from Bad Step cities with powers in commerce and legal say in the pursuit of war.

A small team of the College's many experts in matters of which the government knows nothing.

Every other city-state wanting relations with Sangsalgu and the Triple Alignment send an ambassador(s) who are often housed in the God Prison.

Some of the animals housed inside include foxes, coyotes, eos, little brothers, monitors, lizids, armadillos and snakes.   The symbols of the city state: jaguars, pumas and panthers are kept here for most of their time.

An expansive, multi-level lodge attached to the Jaguar House that houses physically mutated people for the public to view.

Atzacualco District is about half-and-half in terms of land to chinampas and was the first direction which Sangsalgu expanded its infrastructure. The majority of the buildings within Sangsalgu Proper are made of stone, even simple commoner homes which the inhabitants exude pride in, over the commoner homes outside of Proper made of purple salt.

Built on top of small islands and marsh lands. It is the largest city in the world; although some might take this to be misleading. It is this area, given to the Sang, where Sangsalgu would grow and stretch to the lake shores. This swampy land is Sangsalgu proper, where the Sacred Precinct holds the most direct control and ethnic Sang tend to congregate.

Competition Homepage
In response to the prompt Describe a bustling market settlement in your world. What can I find for sale?

That's a really interesting city! I wonder what do the leaders do during famine periods: do they release the 15 month crop stores? Or do they keep them just in case?   I wish you had expanded a bit more on the market and the sort of things one can find in there. It could be a nice addition to the side bar ;)