The Nineteenth Card (a.k.a. Diver Down)

"[Aoife]? She's the type to hold her breath when strangers walk by; a sweet girl, but I fear for her."
— Abbot Orbison

Aoife Van Halen was a Siorvill woman from Tosenza, Aelayeron and one of the 22 chosen by The Adjudicator of legend to participate in the 1499 Gathering Flowers Event.   Originally found wandering a small village on the outskirts of the city of Canponti, only mumbling what was presumably her name, Aoife was taken in by the local monastery and brought up as a nun of the Asporaso Faith. At some point, she began to participate in an underground fighting circuit in the city of Temeio; her trips under the veil of religious excursions. This violent, secretive aspect of Aoife's life reasoned as "making the best use of her talents" by Abbess Willamina Van Halen and Abbot Orbison Van Halen: the pair of Asporaso disciples who managed the Canponti Monastery.   Aoife was designated as "The Nineteenth Card" during the 1499 Gathering Flowers Event and represented The Sun of the Major Arcana.

Aoife's most defining traits were her tall stature, the bags under her eyes, her massive amount of dark-green hair reaching past her knees and how gaunt she was. Her voice could be described as husky, though flat.

As with most Siorvill, Aoife was a notably tall woman at around 1.9m or 6'4. Though, unlike others of her race, she had a distinct lack of musculature. Her outwardly scrawny appearance in conjunction with her personality would lead most to conclude she was rather weak in both body and spirit.

After an encounter with the supernatural entity referred to as the Chordette, Aoife became reduced in age: appearing to be around eight to ten years old. Her distinct bags beneath her eyes and wavy, dark-green hair remained, though significantly shorter. Aside from the Siorvill traits of pointed ears and protruding lower cuspids, Aoife wasn't much different than other human children, physically.

As a child, Aoife was quiet even compared to other Siorvill, going so far as to communicate almost exclusively in small, single-word sentences. Other occupants of the monastery noting that she would usually be found "clinging to the robes" of the few individuals she felt comfortable around or, failing that, she would seclude herself in some quiet spot. Hours could go by before someone who noticed her absence and look for her before she'd move.   As an adult, much of her personality remains unchanged as Aoife would only speak when absolutely necessary, even towards other members of the Asporaso Faith. Additionally, when actually engaged in conversation, Aoife would either revert to speaking in single-word sentences or become greatly agitated: sweating, stuttering, fidgeting; sometimes to the point of crying. She also, as some of the other members of her convent put it, had a difficulty "understanding she was being victimized." An example being when mere children were able to take food directly out of her basket with Aoife only being able to ask them to give it back.   Upon donning her helmet, Aoife would become a silent force of brutality: moving with speed, strength, and dexterity in stark contrast to her normal demeanor. Men would be crushed within their armor and beasts would have teeth and even limbs torn off.   A notable aspect of Aoife's character is in regards to her freezing up at the sound of beads, usually wooden, clinking together. This noise would often cause her to become tense or even curl up in tears, though as "Diver Down," this effect would be lessened in that Aoife would instead refrain from approaching the source of the noise.

Much of Aoife's life under the Apsoraso Faith was like any other member in which she carried out various religious duties and would frequently attend mass. As an orphan, she was given the surname of Van Halen, meaning "Of the Hall." The only known stigma against her being a romantic relationship she had with a boy from Canponti during her teenage years, though this would cease after strict discipline from the Abbot and Abbess.

Unlike most Siorvill, Aoife did not display the thick, burly body-type of her race but instead was thin to the point of appearing almost sickly. Any doubts toward her strength would be quickly snuffed out upon witnessing her feats of power as Diver Down such as lifting a Lillin male in full plate armor off the ground, her skin tightening to reveal musculature defined as if from iron. Her strength not only being above other Siorvill but as to come from such a physique would lead many to speculate on what sort of inhuman monster lay beneath the mask of Aoife's gladiatorial persona.

Although her armature would frequently change upon collecting pieces off of her foes which suited her tastes, Aoife's primary weapon was a large, iron anchor tied to a steel pole. The anchor seemed to be of an enchanted nature due to many witnessing it "drink blood." As to what purpose this ultimately served remained a mystery as the weapon presented no other supernatural qualities. Its name comes from the woman's face carved into the base of the anchor, Aoife describing it simply as a "pretty woman."

Aoife's ability as a Tarot Card would manifest as first a distinct chime, much like a cathedral bell, which would follow with everything in the immediate vicinity around her to become lit as if in direct sunlight. Though this light would have no seen source, as everything seemed to be illuminated from all sides, its effect was felt immediately as all living beings seemed to undergo exhaustion when in the area of effect. This allowed Aoife to easily kill victims as most were unable to properly fight back or even flee in some cases.
Namesake: Van Halen (Various references to the band's "Diver Down" album)
Leitmotif: "Intruder/(Oh) Pretty Woman"
Age
20
Date of Birth
August 15th, 1479
Biological Sex
Female
Eyes
Sea green
Hair
Very long, unkempt and dark-green
Skin Tone
Pale White
Height
6'4/1.9m 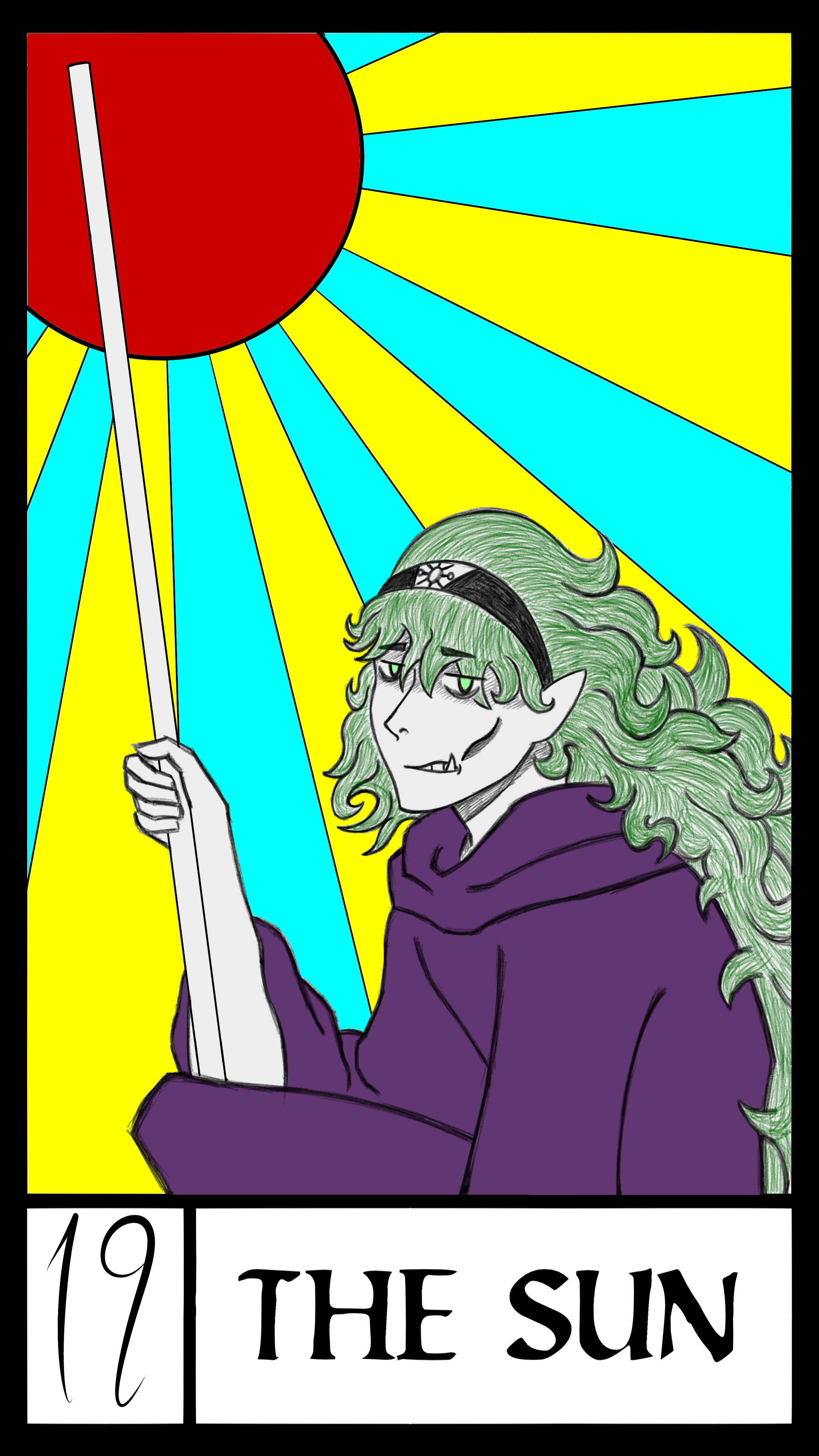 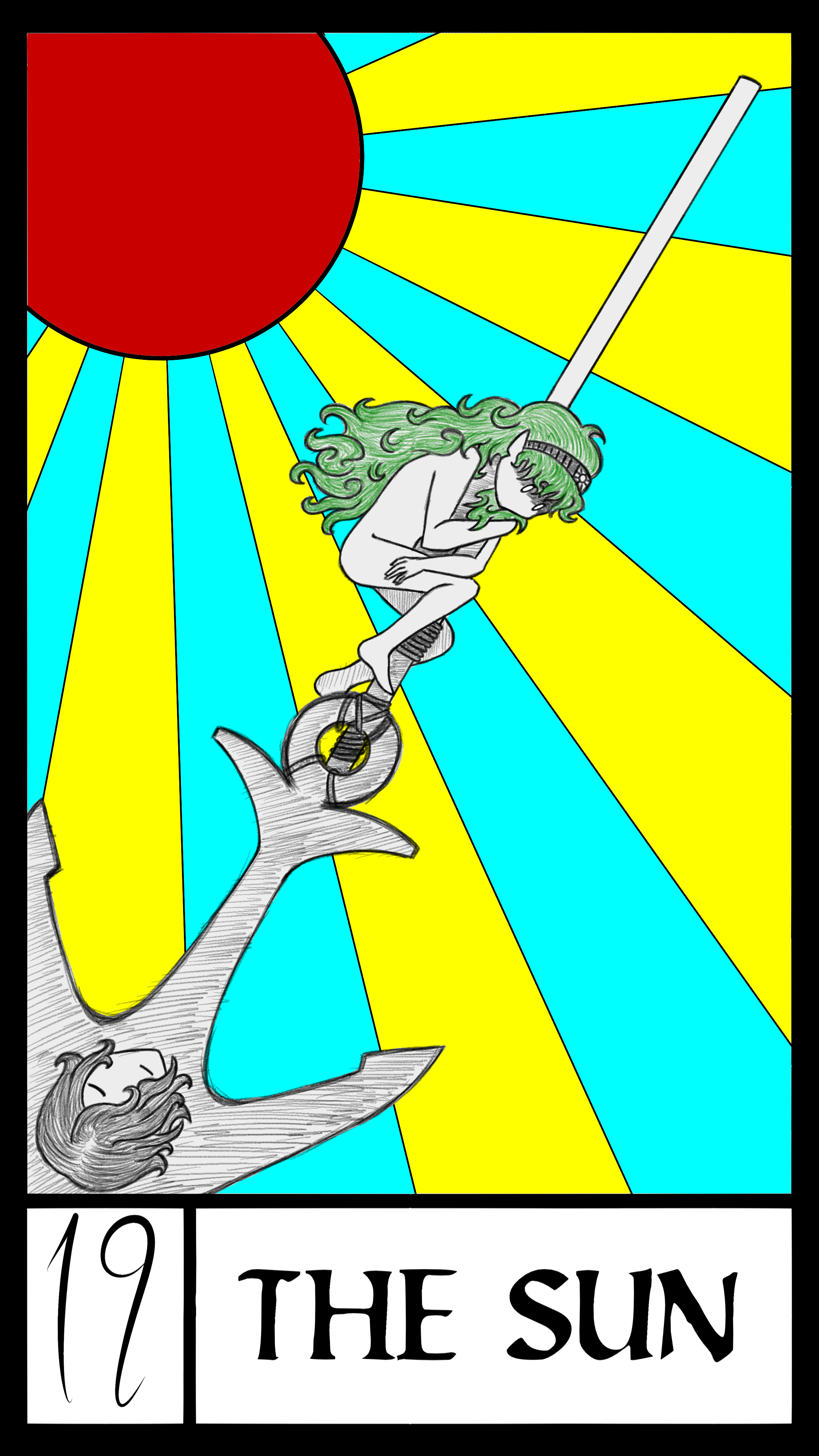 #19: The Sun by Awsm Chimera
Characters

Tweet
This fiction is completely unofficial and is in no way endorsed by any party. No challenge to any copyright holder or their status intended. All Rights Reserved to their respective owners.

Hello-hello!   Aoife here (pronounced "ee-fah" by the way) is an iteration of one of my oldest characters named Maya. This is Maya's first official appearance in the timeline of Val-mundi and expect me to put her in pretty much every major story in the setting because I can. Special thanks to my old friend Joe for creating the initial concept of Maya way back in 2010, though I'm aware that version of her is pretty much nothing like how Maya is these days. (Laughs)

Interesting character and quite different! :O

Thank you very much. I appreciate you taking the time to read and comment, Mar.