Thought to be the original Inhabitants of Tural, these tall and well built humanoids are an increasingly rare sight in the north of the continent, concentrated mostly south of the Iron Mountains and the Glittergloom Sea where the Elanians, descendants of the Hekancci tribes hold sway, while remnants of the ancient Kessinian civilization still remain along the coast of the Sea of Claws from whom the race got their name. Small groups can also be found along the northern border hills to the steppe.   This scarcity is not entirely due to war, but mostly to integration into the growing human population, themselves, half-Breeds of the Khesum and Thujans who migrated onto the continent thousands of years ago. Even the Elanians, the most numerous Khesumii that remain are not pure blooded but a mix mainly of Khesum and Amanokami from the southern jungles.
Outside the Elanians United Nerall Empire, Khesumii hold a certain degree of autonomy within their small corners, having their own towns and cities, and, to an extent , their own laws, though they are still subject to the overall ruler of that area.

The origin of the Khesum is unknown but they likely migrated into Tural around the same time as the Sinians who inhabit the south east. Myths would have them arriving as a wave of multiple tribes onto the south coast under some kind of confederacy led by War Ascendants, chief among them being Morr, the now Goddess of Death.
The myths says they were fleeing some great enemy called "the masters", that had enslaved them, killing and stealing away their ancestors from their homes generations past, putting them to work in fields and underground morning to dusk. Whipping or murdering them for small infractions, selling their young to far a way places, raping the women for sport, and all the while stating the Khesum were lesser, base, and allowing them no Gods or religions to turn to for hope. The very earth itself however rose up against these "pale yellow men" as a giant whirlpool of rock at the heart of their homeland, destroying them and their land even as the masters tried to chain it, allowing the Khesumii to escape from this land of pain and suffering, of now blasted stone and sulphurous waters. A new culture of Khesum had arrived on the shores of Tural; a violent society, a culture that ha learnt of its strength and its own rage, and they would not be taken as slaves again.

Little else is written down by the ancient Khesumii other than this myth, in fact something may have even happened that made them forget the art of writing all together once they arrived on the continent. While some settled on the coast of the Glittergloom sea and along the Sea of Claws, most seem to have begun spreading out over Tural as small nomadic bands, or clans of hunter gatherers, with sizable evidence of warfare between themselves and the native Khesum and Sinian population. This aggression against "outsiders" was amplified with the arrival of the False Gods at the end of the Ice Age. The violent reaction, especially by the Hekanccian Khesum, to their arrival might mean they were the same "pale yellow men" who had enslaved them before, or at least they resembled the beings from the myths enough. In any case the refugees, the ancestors of the Thuum-Javians, were not welcomed, and moved on almost to the point of crossing the mountains to the west before finding room to settle among the Sinians at the base of the ------- mountains.

Khesum are a tall species, around a head taller than the average human, and seem more predisposed to developing muscle, having strong, thick arms, broad shoulders, and powerful legs. Khesum have a certain brutal handsomeness to them with a darker skin tone compared to humans, holding somewhere near pale 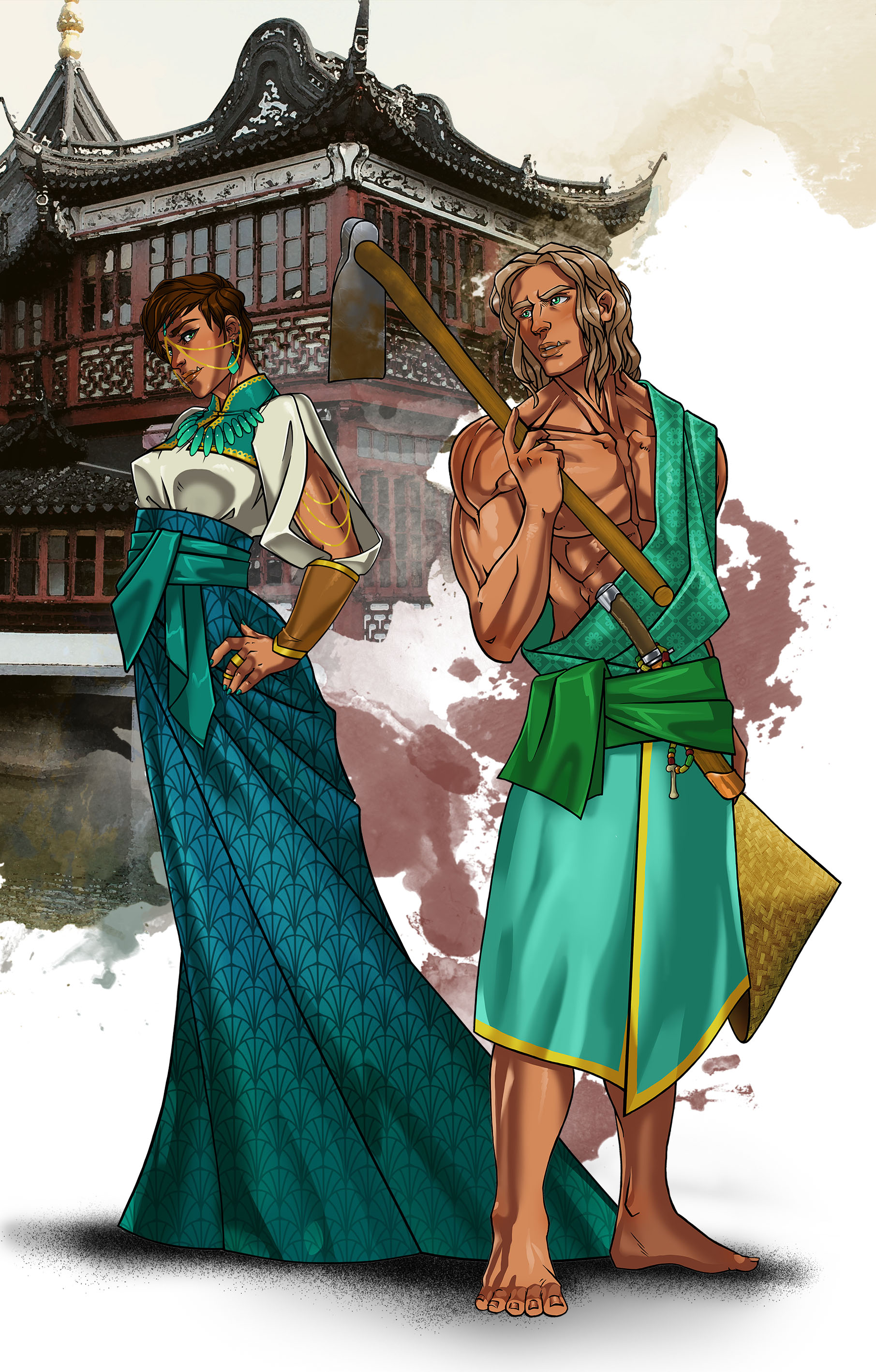 A -------- noble and Elanian farmer.
ochre, with more pronounced brows, thick eyebrows, strong noses, rounded ears, and squared jaws holding enlarged canines or "tusks", in the lower jaw. These features, along with their robust builds lead some to see them as brutish barbarians, but they have a certain dexterity and agility that seems apart from their apparent strength and weight. Female Khesum have a similar physique, standing only slightly shorter on average than their male counterparts and are usually less broad in the shoulders.
Besides the tusks, perhaps the most striking facial feature are their eyes. With colours swinging from deep blue and turquoise, to an almost yellow green. Their piercing colours are still apparent in some humans, linking back to when the two species first met.
Males tend to grow their hair long, tying it back when they are working, though when they go to war this will usually be cut short so an enemy cannot grab it. Females also grow theirs long, though short cropped hair is more common among females than males. They too cut it short when heading to war. It is this cutting of hair before battle that holds a certain significance to the Khesum, with the act preformed by either the Warriors mate, partner or close family kin. The warrior will hold onto a tuft of their hair, mixed with a clipping of their partner as a kind of talisman for good luck, while their partner or kin will hold a similar charm for their safe return. This ritual is a small but important affair, witness only by the closest friends and kin, if that.

The Khesum reproduce the same way as other hominids, though compared to their height and size, their newborns are much smaller in scale, being roughly the same size as a human newborn. This relative size makes the birthing process far easier for the female, requiring less help, though this means the newborn is still as underdeveloped and vulnerable as a human child.

As they start off much smaller in relation to the adult members of their species, depending on diet, a Khesum children become full-grown around the age of 19-20. On this day, the Khesums kin and extended family gather to perform the rites of adulthood. Such rites vary from culture to culture, but at its core, they involve the young Khesum making an offering to the Clans elders and ancestors, usually an apprentice craft they created to demonstrate their skill, or a show of martial or artistic ability.

Khesum society and culture can usually be characterized by hardy and rugged living. Though they have advanced from their nomadic and "barbarian" ways through contact with other cultures, they are still a pragmatic and spartan species, with all members of a clan being expected and required to pull their weight, with weakness being considered a grave liability.
There is also a universally strong focus on honour, and trust, with oaths and promises being kept too, sometimes generation after generation. As are broken oaths and the desire for recompense or revenge. Their peoples past also plays a central role in their society, as does ancestor worship alongside the worship of various deities, and many shared customs and stories told to young clan members that stretch back thousands of years. 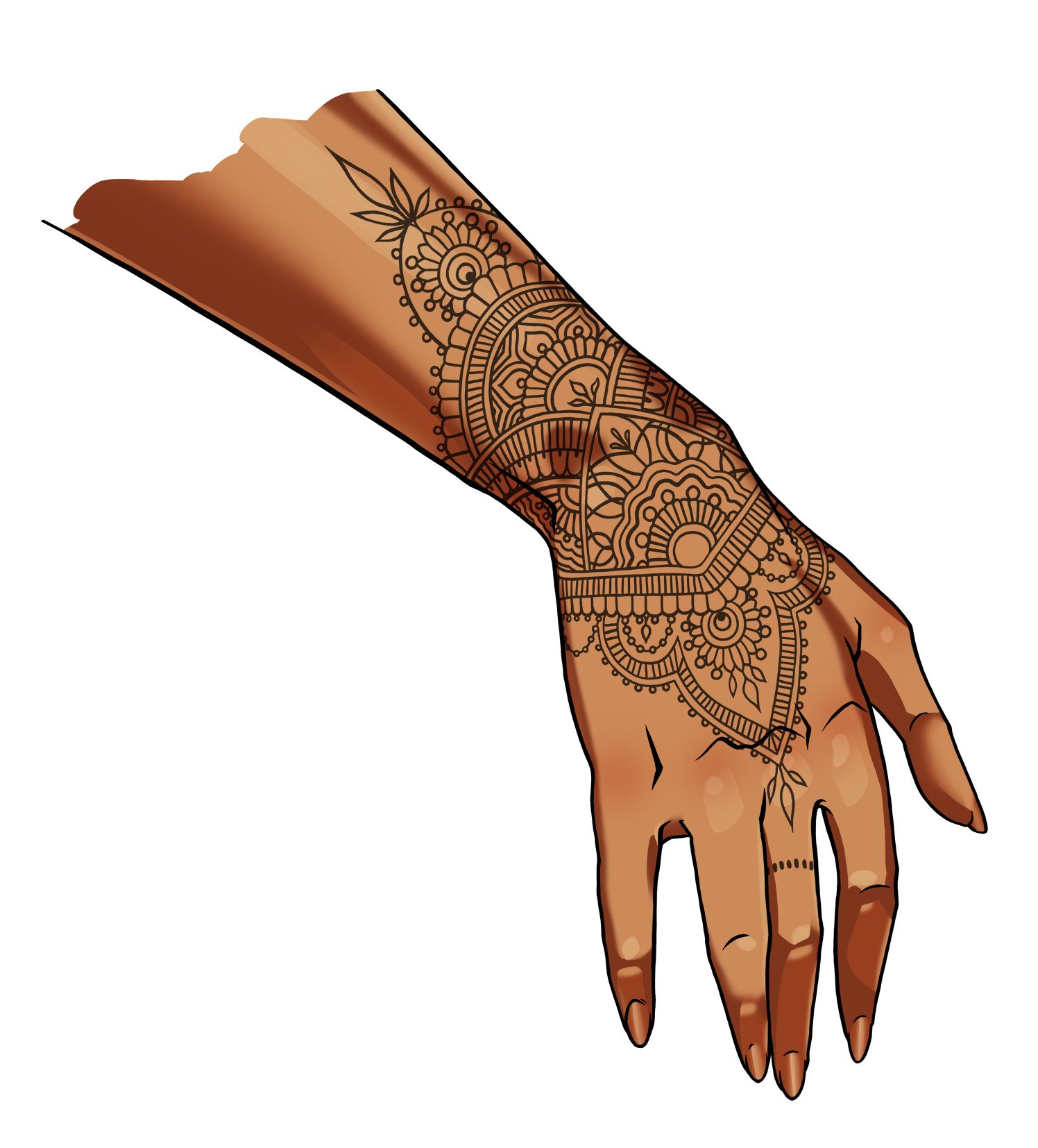 A northern ------- Shagga tattoo.
Almost all Khesum cultures practice a tradition of marking their skin with a plant based paste called Shagga, said to have been taken from their homeland thousands of years ago. It is used to create intricate, spiralling patterns on the celebrants body, usually centred around the wrists and hands, though during marriages these can grow to encompass the whole arm and even the chest and neck. The process for such decorations can take days, but even smaller Shaggas are a group event, with family and friends coming together to paint one another a few days before the celebration.
Shaggas are also used to mark a soldier or warriors acceptance into the military, where their chests and back are completely covered in spirals and swirls. Male or female, they then spend the next few days doing their duties bare-chested to show off. A practice that may have led to the myth of berserkers: bloodthirsty warriors that fight naked, with only their warpaint to cover them.
Within a few cultures, this practice is made more permanent through the use of inks and tattooing, especially among warriors, though they can wear clothes and armour over it. Mated pairs are also known to tattoo swirls and patterns around their wrists to mark one another, and for some this has come to be the traditional indicator of their mated status rather than a ring or other item.

As well as keeping their hair short, most Khesum, especially those in the south, practice a custom of removing most of their body hair no matter the gender. This is accomplished through a mixed paste applied after washing, and brushed off after a few minutes. The ingredients vary depending on location, but the basics remain the same, the plants being brought with the clans when they fled the masters continent.
Whether or not this was a custom imposed on the race by those self-same masters, or a tradition practiced already is lost.

Khesumii, like humans, hold marriage in high regard, but with a far greater emphasis on "mates", as it seems to be through the Khesum blood that such a bond forms.
"Mates" are rare in the world, with the legends saying that all are born to the world with half a soul, and their mate is the other. Mates form an intimate and unbreakable bond between one another over varying lengths of time, linking their souls via a mental bridge of sorts that they can seemingly communicate over. It is unknown if this link has anything to do with some inherent Dream of Power the Khesumii have access to, as no mated pare is willing to have someone else poking around their bond or their mate for that matter. The pair tend to be very protective and territorial over one another, especially against strangers where they will often become violent over a misconstrued glance or smile.
Not all pairings are perfect however. Cultures and traditions can mold people in different ways to the point where they don't necessarily get along or even despise the other, though many will still try to bridge that gap between them. If not, a bond can be rejected, and depending on the culture that is the end of it though a tug will always be felt, usually more so in a male.

To find one another is an unlikely occurrence, and the less Khesumii blood a person has, the quieter and more muffled the instinctual sense is of one to another. 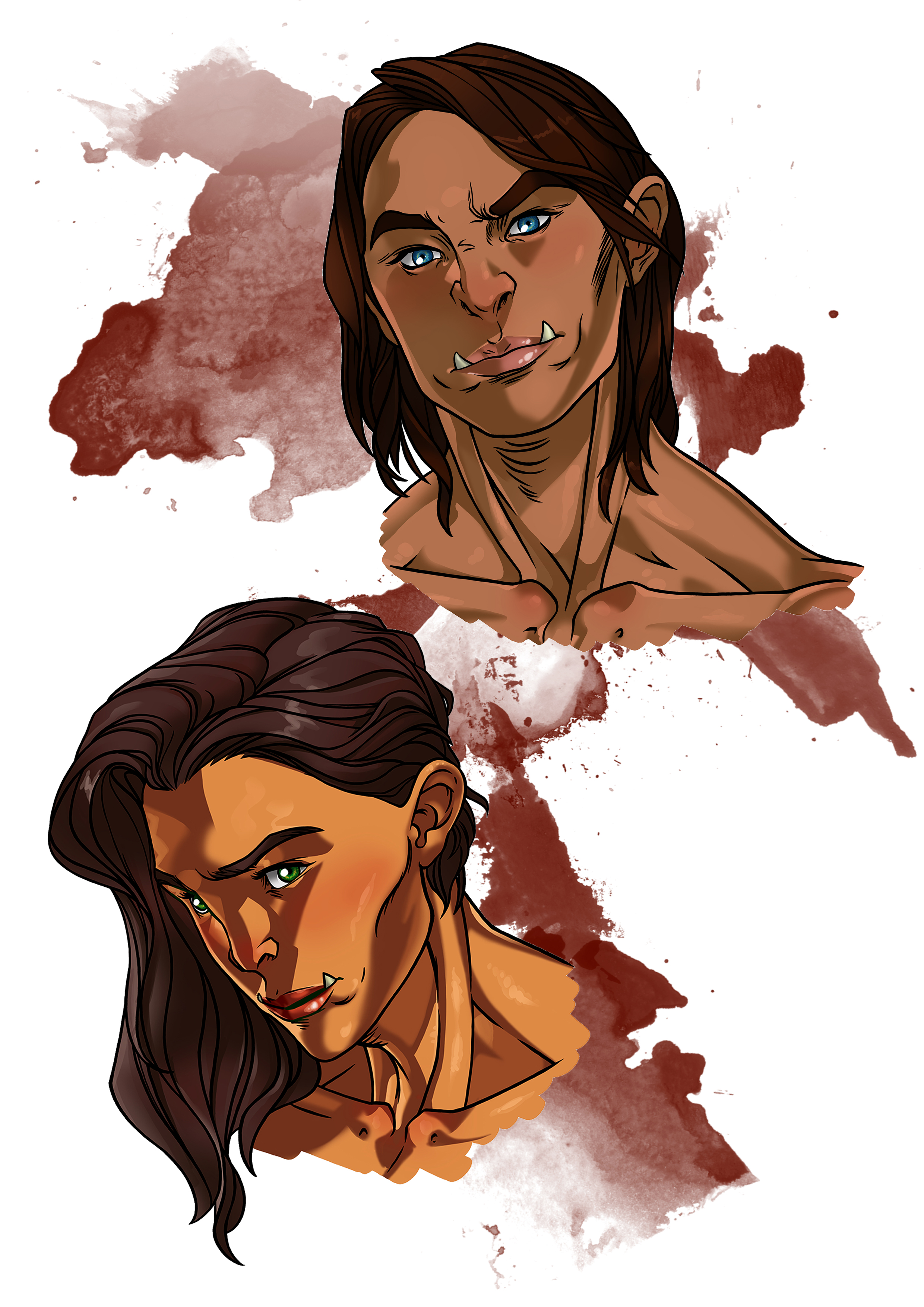 Mainly in the south and west of Tural, with a few communities remaining scattered in the north. 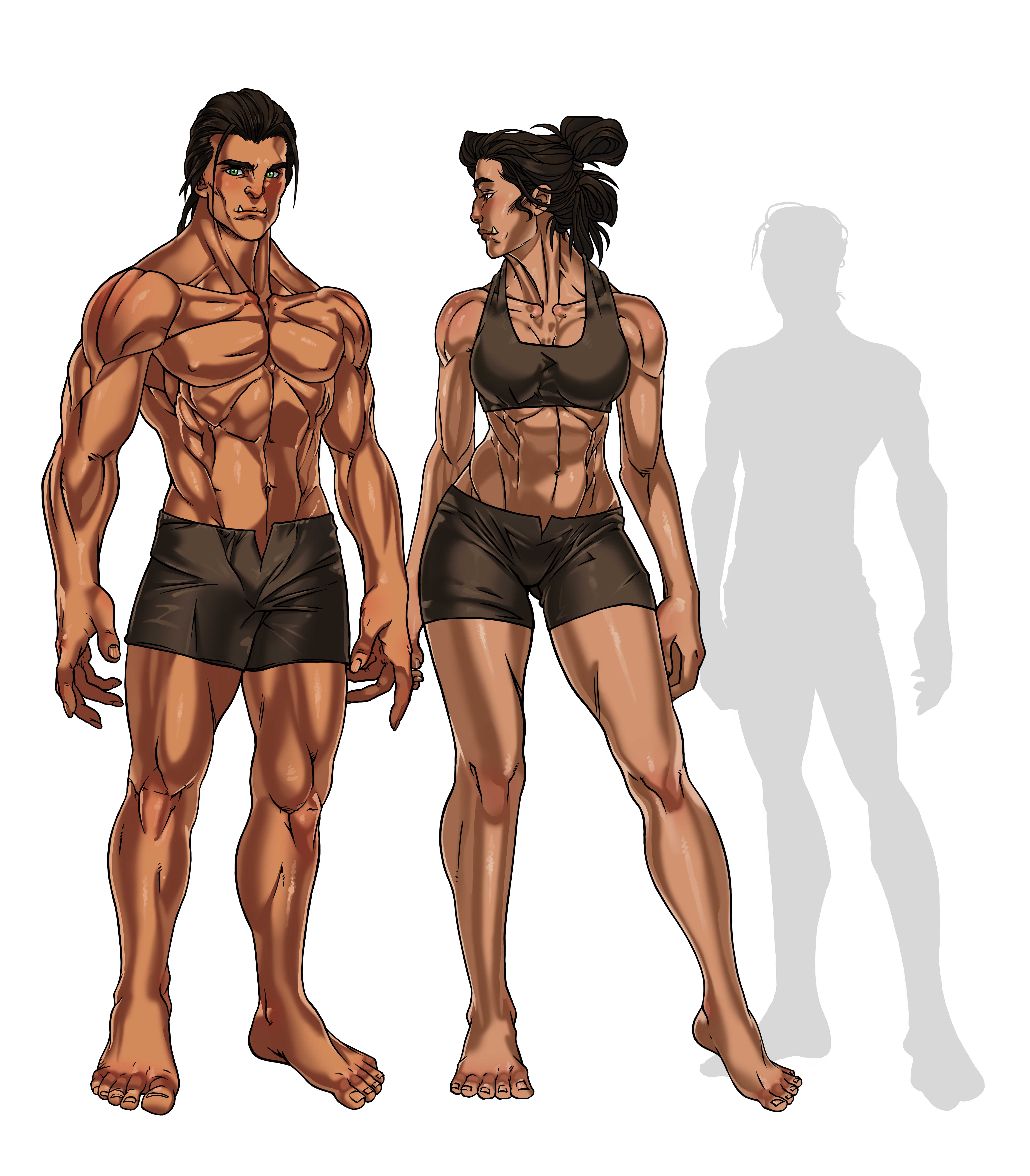