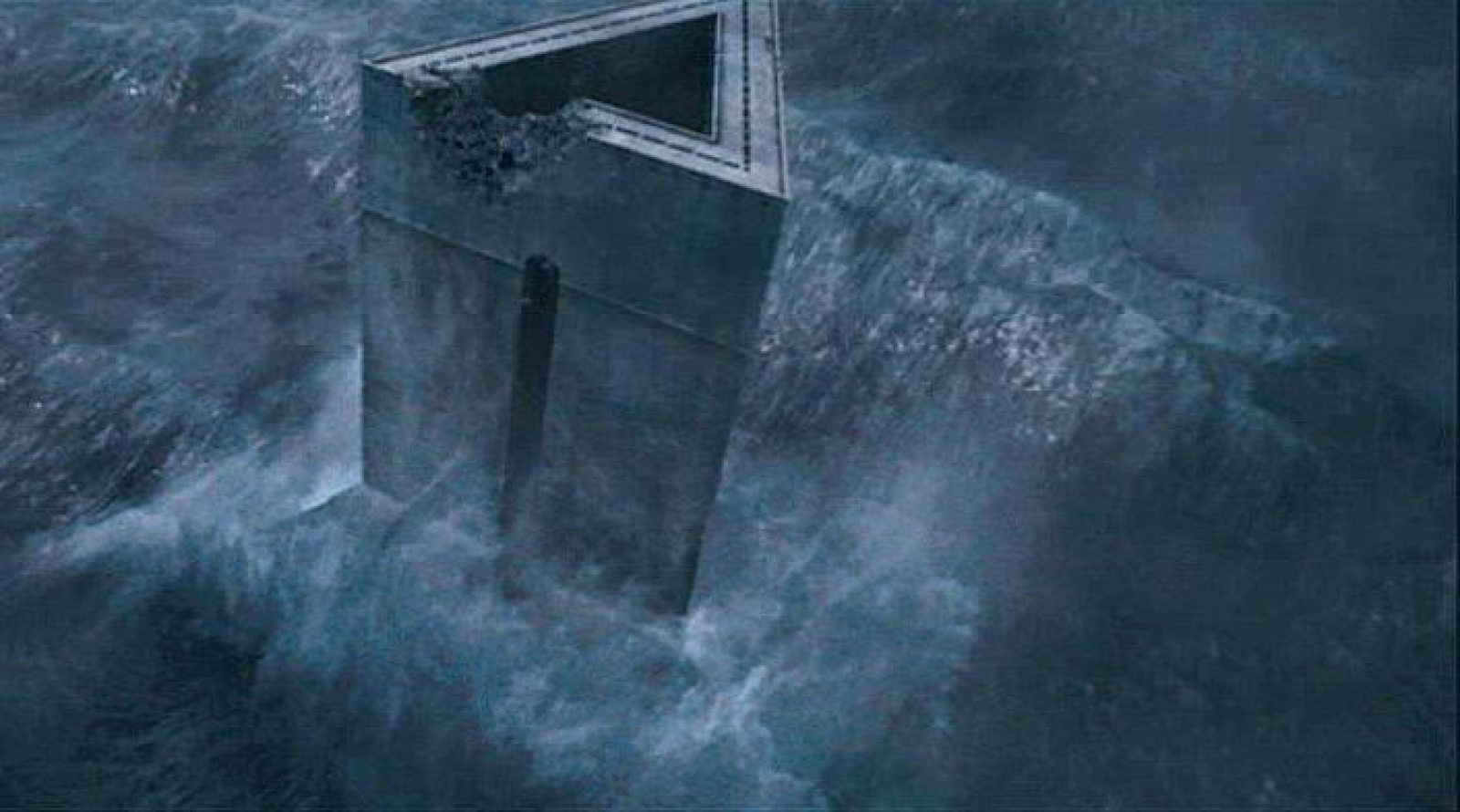 United Britannia and Hibernia      Britannia      Ilyrium      Turrim Maleficis
The Turrim Maleficis is located outside of Ilyrium in United Britannia and Hibernia. The magically-enhanced obsidian building is surrounded by a witch-made lake that resembles an ocean in its temperament. A bridge connects the tower to the mainland and the bridge is only accessible when the tower is open to the public.   The Turrim Maleficis is advertised as a museum for witches, and about half of the building is, in fact, used as a museum. (The other half...well, witches do not need to concern themselves with that!) But only the bravest venture to go into the museum: its grim appearance challenges only the most foolhardy to buy a ticket to view the numerous exhibits of Dark objects and people. Perhaps the most popular attraction is the large exhibition of known Dark witch Kasper Gray and his famous manuscript, the Gray Book.

“They say," a woman in line said nervously to another woman, looking furtively around as though she expected a Dark witch to appear at any moment. “That the tower was never built. It just appeared."

“Appeared from where?" The other woman's tone was skeptical, and her eyes were wide with curiosity as she stared at the tower. “The Magisterium built it in the 1600s or something. It didn't just appear. Nothing does."

The first woman shook her head impatiently. “No, no. That's the story. No, it was created by some Dark witch and Dark Magic, and they say if you go in, Dark Magic will consume you."

“My gods, Cleo. Mother just came two months ago and she's fine. And what about all of the thousands of visitors a year?" the second woman asked with an eyeroll.

Cleo didn't say anything but she still wouldn't look directly at the tower. For some reason, she could tell that even without the Dark Magic, something wasn't quite right with this tower.
--A casual observer, in her journal

The Turrim Maleficis was built in 1666 by the Magisterium in response to the changing attitude of Dark Magic; previously, Dark Magic was termed Occult and labeled largely harmless. However, the magic began to evolve into something darker, hence the name change. The Magisterium's true reason for building the tower was to begin its hoard of Dark objects; they knew that the witches of UBH would not tolerate an actual repository of Dark objects, and thus, the solution was to build the tower in plain sight and label it as a museum.   In 1834, the Council and Magisterium (under public pressure) decided to institutionalize Dark witches (and some Time witches) instead of simply executing them. Although parents of these children are under the assumption the children live far away and live humane lives, the exact opposite is true: they are housed in the Institution. Because of this, the Attic and Institution were created both to institutionalize and house higher-powered witches. Since 1834, no changes have been made to the building.

The Turrim Maleficis is a triangular-shaped, obsidian 7-storied (+ Attic) building, sitting in the middle of a witch-made lake. The building has stringent security measures to keep out both humans and other witches when the building is closed. (Unbeknownst to almost everyone, there are many spells in place to keep its residents in as well). Additionally, there are dozens of Illusion spells to hide the tower's true height.   Part of the roof is crumbled due to an attempted breakout in 1762; since witches do not know it holds Dark witches, the Council-provided narrative is that a famous witch defeated a Dark witch in an epic duel and the roof is kept as is for commemoration. The name of the famous witch and the Dark witch is, curiously, absent from records.   Ultimately, the Turrim Maleficis was built to evoke an ominous feeling; both because of its function as a Dark museum (it creates quite an atmosphere) as well as to discourage witches from researching into the building further.

Although the tower is a museum and a tourist stop, many witches that visit have a very visceral reaction; in addition to feelings of danger and evil, a portion of witches may feel physically ill and emotionally distraught, even days after leaving the tower. As such, it is rare for witches to visit more than once.

The first time I saw the Turrim Maleficis, I was twelve years old. I begged my father to take me, and he eventually relented. Of course, I had seen the tower a thousand times from the distance, but my first time standing directly in front of it took my breath away.

The building itself wasn't that different from many of the other buildings in Ilyrium (the Magisterium building was triangular as well) but the dark obsidian bricks in combination with the angry swells of the lake gave it a foreboding feeling. Even though I have Dark Magic, I knew it wasn't just the presence of Dark objects that lent itself to the ghastly atmosphere.

As I stood in line with Dad, I almost wanted to turn around and walk away, but I held steadfastly. I was twelve, and brave, and this dark building would not overcome my false sense of bravado.

Dad and I spent a few hours there and nothing inside piqued a more ominous feeling than standing outside the building itself. Even my father, more sensitive to Dark Magic than most because of me, remarked on the building's disturbing ambiance. It took me about two weeks to shake the feeling of that building, and I found out later it wasn't uncommon for people to feel the same after their visit as well. It was rare for people to visit more than once, and even though Dark Magic is my specialty, I stay away from that tower. Celia always teases me when I say that the tower is more than a museum, but if the building bothers someone born with Dark Magic, imagine what it actually houses.
--Vesper Cross

Built: 1666 by the Magisterium 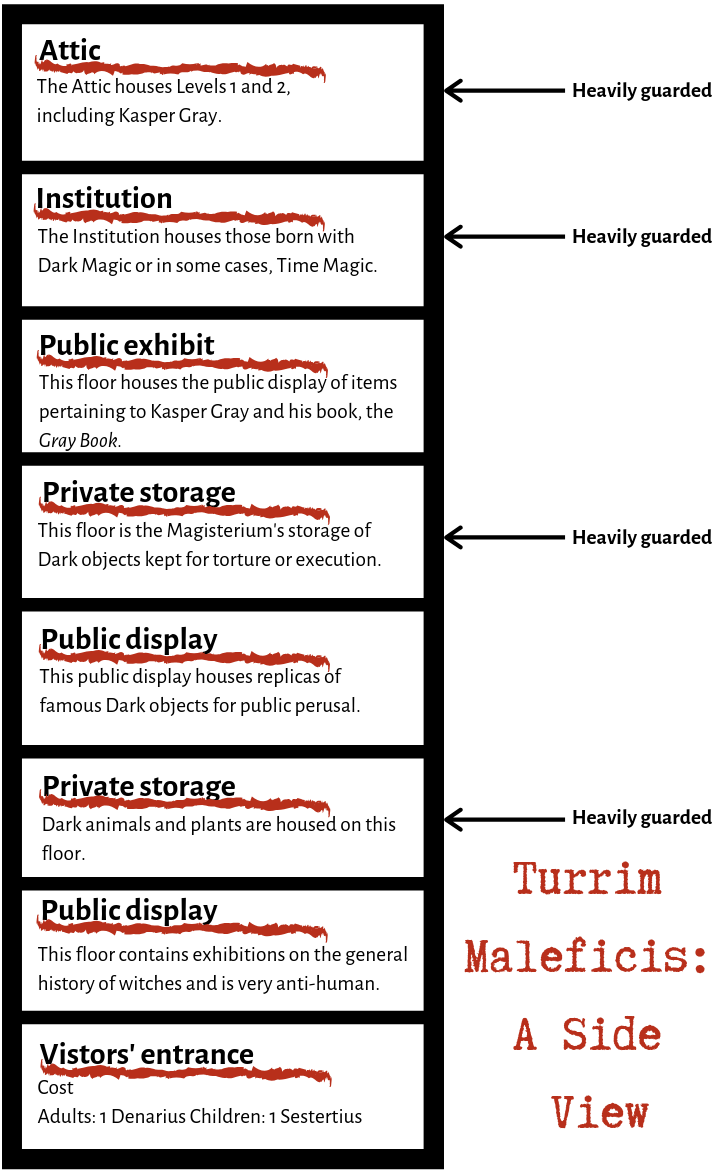 Written for 2019's Tower of Power challenge.   And for the eagle-eyed readers, the header image is Azkaban from Harry Potter.   Sorry for the rudimentary diagram of the tower! I don't have Photoshop (even if I did, it wouldn't help!) so this is my attempt at a diagram.

This is my kind of place. I love both things worth collecting and powerful artifacts/tools! The way it all links together to Kasper Gray makes it an enjoyable read! It would be cool to see more example artifacts!

Thank you so so much for choosing my article as a feature! I am definitely working on more Dark artifacts, so I hope this article is just an entry to better Dark artifacts!