From a popular children's song, written in the {Prosperous Era}     Nemalnium, described as "nemal", is the most common and widely-used metal on Unos. Its ability to be molded without fire, strengthened without fire, and withstand the intense heat of the desert indefinitely is the sole reason humans were able to leave Cha Tesid at all, much less create the vast culture they enjoy today. You'd be hard-pressed to find anything in the desert that isn't at least a nemal composite.   In its natural state, it can be pushed and molded into any shape, and dried out to keep a shape permanently, much like modeling clay. This unique property makes it one of the most interesting and experimented-on materials in the world, on top of being the most widely-used one. 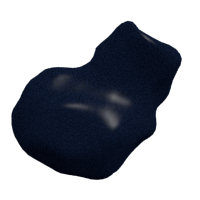 Nemalnium has a fairly dull apearance in its raw form, but is VERY smooth. It has a very dark blue color to it. When found in veins, it looks like an amorphous blob.

Nemalnium is most known for its near-total impotence to heat. This makes it the perfect material to use in construction of things that need to operate in the erg.

The most common place to find nemalnium is out in the erg. Rarely, a small deposit can breach the surface of the sand, but this usually indicates a larger vein submerged deeper and nearby.

It is unknown exactly how nemalnium was discovered, since this was so long ago, however it IS known that the material was used to create the foundation of {Tesid Devys}. According to legend, the very first nemalnium deposit ever processed by humans was a large chunk that somehow found its way to the Hemitt Line of {Cha Tesid}.

Nemalnium is the backbone of everything that crosses the erg. Its status as an unmeltable metal makes it extremely popular as a material in {sand trucks}, {coolsuit}, and anything else that would be at a disadvantage in the great heat of the desert. It's also fairly plentiful, with even a small deposit being able to stretch thin enough to create large structures while being strong enough to sustain them. If you have a metal tool that you use near the sand, it's made of nemalnium.

Nemalnium is mundane as a material, like paper in our world. Its uses are so many and its availability is so large that it's borderline impossible to consider a world without it.

Nemalnium is unique in that its natural state is perfectly ready for use once found. One only needs to roll and prepare it to change its shape, and then let it sit once done, much like clay. When dry, it's extremely strong and durable on its own, however most modern nemal structures are given a {coating} for extra protection.

Technically, nemalnium can be re-hydrated after being dried out in its desired shape, but the process is often more trouble than it's worth. It's not so bad if you've just freshly dried it, however after it's been strengthened and painted, you're best off just discarding the thing and getting a new chunk.

Nemalnium is a very well-traded material, given its use across the world. Many {miners} make extra {leaves} on the side with an offload of raw nemalnium, and the stores of many smaller islands are always fluctuating in nemal stock.

As easy to store as it is to shape, however it must be kept in such a state as to not dry. Nemalnium is only useful as a building material if you can still build with it, after all. Machines exist to form raw nemalnium into cubes for easy storage, and are often kept in a special humidified chamber aboard a truck.
Type
Metal
Value
The raw value of nemalnium can fluctuate greatly, and is probably the one commodity most affected by supply and demand. Often not valued very highly, but this can skyrocket if someone forgot to order more.
Rarity
Very common, yet individuals and corporations are always willing to increase their stores.
Color
A very dark blue, often mistaken for black.
Melting / Freezing Point
None/unknown, this metal is seemingly impotent to temperature.
Common State
Solid
Related Locations
Related Professions