Coolsuits are small two-legged vehicles that allow an occupant to walk on hotsand without melting or cooking. They're often built with nemalnium, and are interlaced with a cooling system. They vary in style and function, since many different manufacturers make them, however most are of a bulky design. Suits are often built to purpose, which is why the unofficial "class" system exists within the coolsuit industry.

Contrary to logical deduction, coolsuits weren't conceived until after the sand truck made its maiden voyage. Many believe that the cooling technology was too intricate at the time to miniaturize, while others believe that pre-expansionary people simply didn't think small-scale erg travel was possible for one reason or another. Regardless, no historical evidence of coolsuits exists that predates the {Neoza}.   Despite the lack of records, historians have been able to discern that the coolsuit may have been an accident. The oldest coolsuit ever found was at the eastern edge of Hemitt's Expanse, which was crudely constructed with oddly-shaped nemal chunks and had traces of coolant residue smeared all over the inner shell. Its proximity to an old truck cabin suggests that an inventive and panicked crewman needed to retrieve something (or someone) from a fallen cabin. It's unknown whether anybody survived this incident, however the fact that coolsuits exist today suggests that, the concept at least, made it back to Cha Tesid. 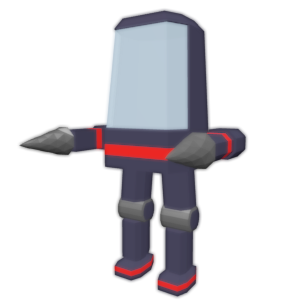 Coolsuit by SeaFishelle
Coolsuits are comprised of a cockpit, dual arms (of varying function), and two legs. The legs of the machine are hollow, and the occupant's own legs enter them in order to control them. The arms, on the other hand, are not hollow and are controlled via controls in the cockpit.   During the Prosperous Era, the idea of a simplistic "box on legs" design was expanded upon to give us more inventive and lavish designs. Cockpits began to feature more elegant shapes and intricate curvature, and legs began to take on more appealing visuals as well. Paint is of course a common element of a coolsuit, with many owners opting to use two or even three colors on their suits.

Coolsuits are mechanical, and motion functions are designed to respond to hu/gamian musculature without any kind of power source. Specific tools, however, do require power. A tiny solar transistor is affixed near the top of the suit, and connects to the various systems across the machine. One such system - which is of utmost importance - is the cooling system. It's made up of a coolant line network connected to a pump, as well as various fans placed at key points. Without a cooling system, the occupant would be cooked alive.

The coolsuit has become a very important part of erg life. Trucks tend to keep at least one suit on-board in the case of an emergency that requires hotsand operation. Some trucks deploy suited crewmembers regularly, depending on the work that truck does. Suits also see use as combat machines, serving as a sort of "sand infantry" solution in a military conflict.
Inventor(s)
Humans (inventor unknown)
Access & Availability
Suits are as freely available as trucks and gyrones, and are much more affordable than either alternative. However, they aren't a very good travel method. They're very slow, and their internal cooling systems need replenishment and downtime after a time. As such, they're most commonly found on trucks and in large ports as work machines.
Complexity
High
Related Materials