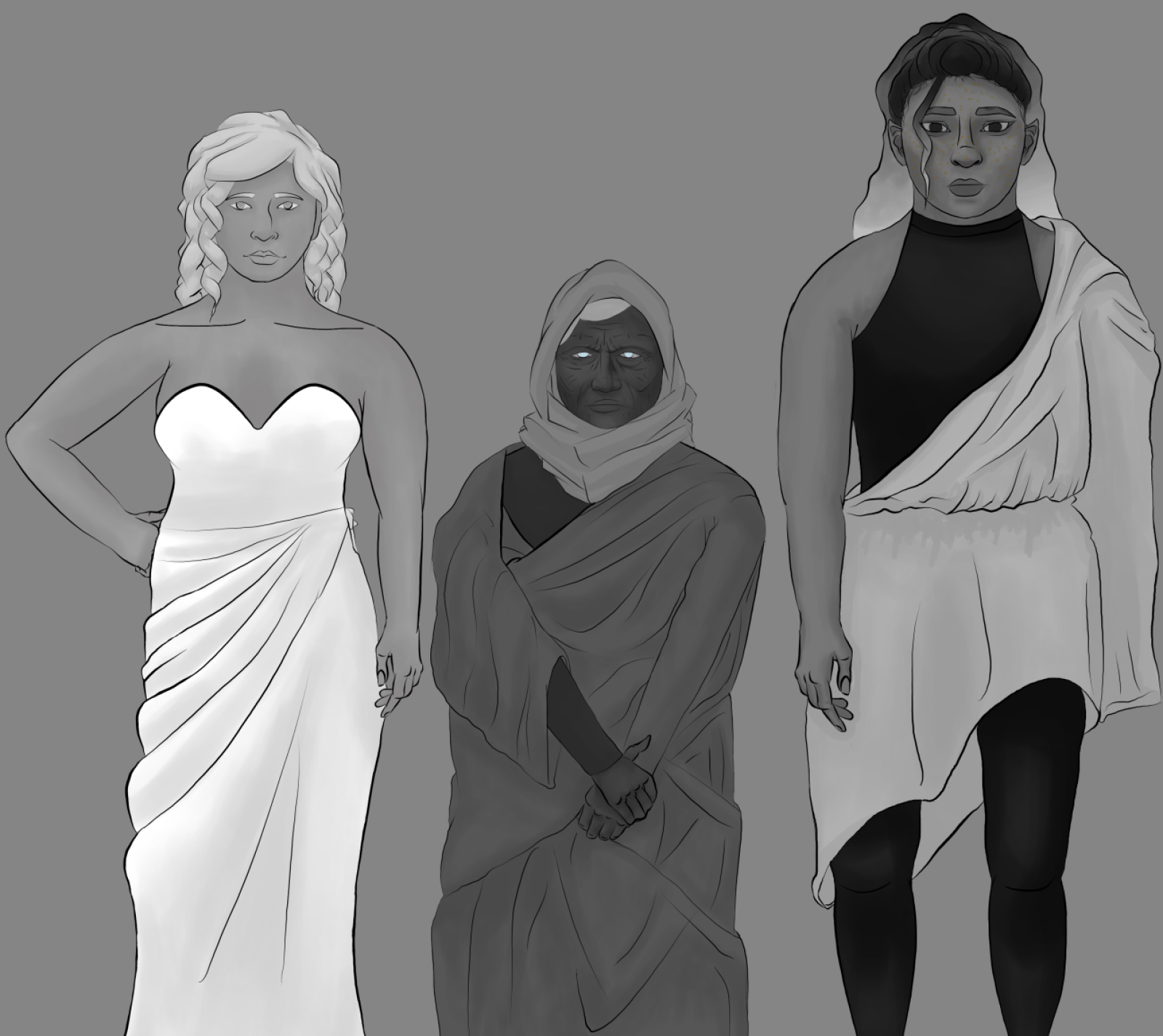 The Paragons are considered a very influential and noble trio, and their corresponding order work hard to reflect that. The three Paragons represent one of three main virtues; Power, Passion, and Protection. They are mainly seen as the third party peacekeepers in international meetings and other conflicts. The standard uniform requirement for Paragons support creativity and only calls for the use of a robe passed down from Paragon to Paragon, modifications and repairs are continuously made so that the robes stay intact.

Currently, the position is taken by Aga Null, who is the oldest witch and is known to be the most powerful. The Paragon of Power is granted the ability to learn and master rare magick styles and skills faster than anyone else, even the other Paragons. There is also a claim that said the Paragon of Power can directly talk to the lost goddess of Velo, and may even possess some lineage from her as well. Whether or not these claims are true, or if they even hold any factual basis to them, has been lost to cruelties of time. It is the Paragon of Power's unique purpose to teach and gather information on magicks and teach the other Paragons this info, consider her the leader of leaders. Aga's uniform conforms to the old conservative uniforms of the originals, with only a headscarf added to the ensemble.

The young Empress of Auferetu, Celene Midnight, is the Paragon of Passion; and has been for a number of years now. The Paragon of Passion is considered the most creatively free, and openly empathetic of the trio. They are known for increased sensitivity, especially around victims around any sort of crime. Because of this Celene often funds negotiations and sit-downs for politically and socially conflicted areas. The Paragon of Passion's unique purpose is to spread a word of peace and forgiveness and to always improve the lives of the less fortunate in any way possible. Celene's uniform features a dress made from the wardrobe of previous Paragon's as to please both her Empress and Paragon duties in one outfit. She is the voice of reason, making sure the other two spend a little time every once in a while in calmness for memories to come.

Young Mercia Gladius, also known as Cantionis or Songbird, has taken up the recently vacant mantle left by the late Paragon Septuo. She is still inexperienced, as much as Paragons go, and has only been apart of the Monastery for a handful of years when compared to the lifelong bond all other Paragons have shared with the Monastery. The Paragon of Protection has been noted to always be a stubborn and headstrong individual, and this is no exception to the current Paragon of Protection. They are also known for intense knowledge and strategies, which makes them great planners for possible future attacks and fights. The Paragon of Protections sole purpose is rather self-explanatory, it is their duty to protect the innocent and 'good' from all forms of harm, this rings especially true to the other Paragons. She is the guard of the trio, always on edge and ready to fight. Mercia's uniform is more modern than the other two, adjusted with a secondary outfit underneath the one shoulder robe, should anything happen and she need to fight without damaging the robe.

The three chosen leaders are known as 'Paragons'; young mentees are 'Powers,' while the older ones are 'Thrones' and elders of the order are 'Seraphim'.   Paragons ultimately decide what actions are to be taken, and how many members assist in what mission, along with where and how long missions stand.   Seraphim act as a council and also den mothers, they guide the philosophy and flow of the monasteries and headquarters. They teach and give advice when needed, as well as tend to sick and injured individuals.   Thrones act as superiors to Powers and help tutor them in subjects they might find difficult. Since they are still considered mentees they have very little authority, the only exception to this is when they are sent as individuals on a mission or meeting.Thrones are responsible for cleaning up the monastery and headquarters, as they are at peak youth and strength.   Powers have virtually no authority in the order until they graduate to Throne, they are considered children and as such, spend almost all of their free-time studying or practicing a skill or subject. They help Seraphims take care of the sick and injured, as well as younger children.

The sole purpose of a Paragon's existence is to serve the betterment of all living species. They cannot give in to selfish desires, such as greed and envy, and must always be composed as to be a role model to those around them.
— Rabiese - The Fifth Paragon of Passion

The exact laws of Paragons are hidden from ordinary citizens and even most governmental bodies, the only people who truly know what governs the Paragons' existence are those who are deemed Paragons themselves. No one knows if there is a written contract or a type of message left by the founding Paragons, but one thing is clear, the rules are loose and open to the change of time.   Many Paragons have gone about different ways to tackle this as a result, the great Rabiese was known for her harsh and strong beliefs in how the world should advance. Meanwhile, the current eldest Paragon, Aga, shares the stubbornness of Rabiese but looks down on modern change, she looks to the past to guide her to the future and is often called out on this by many important figures around the world.     Septuo - the previous Paragon of Protection, was a firm believer in second chances and often tried to understand people who would go out of their way to harm others. Unfortunately, this led to her downfall and was replaced by Mercia, who was not only the youngest Paragon to date but also stood against everything her predecessor worked for. The universal message of the Paragons, however, shows a unified belief in justice and equality along with constant change and keeping up with the times.

The most central point for the Paragon's is the Temple of Ruins located in the south-easternmost portion of Veritas. The Temple is, despite the name, not really ruins, but rather the collective restoration of old ruins once dedicated to the goddess Velo. This Temple sits on top of a mountain, with the step leading up to it protruding naturally from the mountainside, the building itself is a part of the mountain. A monastery carved into the base of the mountain is connected to the Temple through a series of tunnels, this is where all of the important rituals and studies take place.

The Paragons have a handful of 'major' headquarters stationed around the world, one of these is within the City of Mourn which is centered around healing and studying the sick. Others also specialize around certain areas; defense magic is a must for both headquarters in the split country of Lieo. Not counting the Mourn and Lieo headquarters, there are a total of five others hq's around the world, each serving a unique purpose and with its own system in place.

Minor Encampments contribute to approximately 60% of the productivity for the Paragons and their purpose. This is largely due to the fact that minor encampments are more versatile and easy to manipulate, they travel easier as there are fewer people and equipment involved. Minor Encampments are goal-oriented, meaning that until their mission or goal or what-have-you is complete they won't leave or stop they're doing.There is an average of thirty encampments at any given time, each with at least ten personnel depending on the severity of the situation and mission.

There is not much to be said about this sub-category, many of these people are freestanding individuals with no special ties to any one government or belief. They will often spend time in the monasteries to learn basic knowledge and abilities, as a way of gaining a better understanding of the Paragons' ways of life and their goals. Representative groups are sent directly by the Paragons' unified decisions, and typically are a combination of Thrones and Seraphim, while a Throne or two join as part of their training.

Funding is a vital part of the Paragons' unique ability to reach out to other countries and individuals in need, as it is an expensive and time-consuming process. There are a number of different ways each project under the Paragons' Reach can gather the funds necessary to continue including;

It is no secret that those who serve under the everchanging Paragons are granted access to a combined knowledge of all of the nations, something that would be harder to achieve outside of the Order. Because of this many of the members are scholars and knowledge seekers, along with weary travelers and peacekeepers. All headquarters and encampments also have training grounds and courses, along with equipment, to encourage regular fitness and healthier lifestyles. Amongst these including diving practices which slowly increase oxygen preservation and marathon runs for stamina building. In addition to these basic offerings; Paragons gain heightened senses, with clearer eyesight and more sensitive hearing, this greatly adds to reasons why they often choose to partake in more dangerous missions themselves.

Because the original founders of the order were natives of The Island of Tod, only natives can be inducted as Paragons. Many of the Seraphim are natives, but there is a handful which has come from other regions of the world. The same thing goes for many of the Thrones and Powers, though as of recent there have been considerably fewer natives as Powers by comparison.   A total population count has never been considered by the Paragons, as members are allowed to join and leave as they please.
The header image contains the three current Paragons, all natives to the Island of Tod; from left to right they are, Empress Celene, Aga Null, and Mercia Gladius.

Empress Celene is the reigning Monarch of Auferetu and resides in the capital city of Eno. Aga Null is the oldest living witch and is considered highly powerful and wise. Mercia Gladius is the youngest paragon ever inducted, starting at the age of seventeen, and is usually away from the Temple running missions and gathering supporters.
Type
Religious, Holy Order
Alternative Names
Paragons, Virtues
Divines
Location
The Island of Tod
Controlled Territories
Related Items
Notable Members

Remove these ads. Join the Worldbuilders Guild
Uni
Religious
The Island of Tod

Join Ultimus Discord!
This article has no secrets.

Sorry for the delay! I've been looking hard into the BBCodes and different ways to use them and also spent quite a bit changing the concept art to make it more appealing. Expect a short article on Veritas soon and then I'll be combining the two Magiviore articles and posting concept sketches for it~ If you have any questions about the Paragons as individuals or have any suggestions I'd love to hear them!