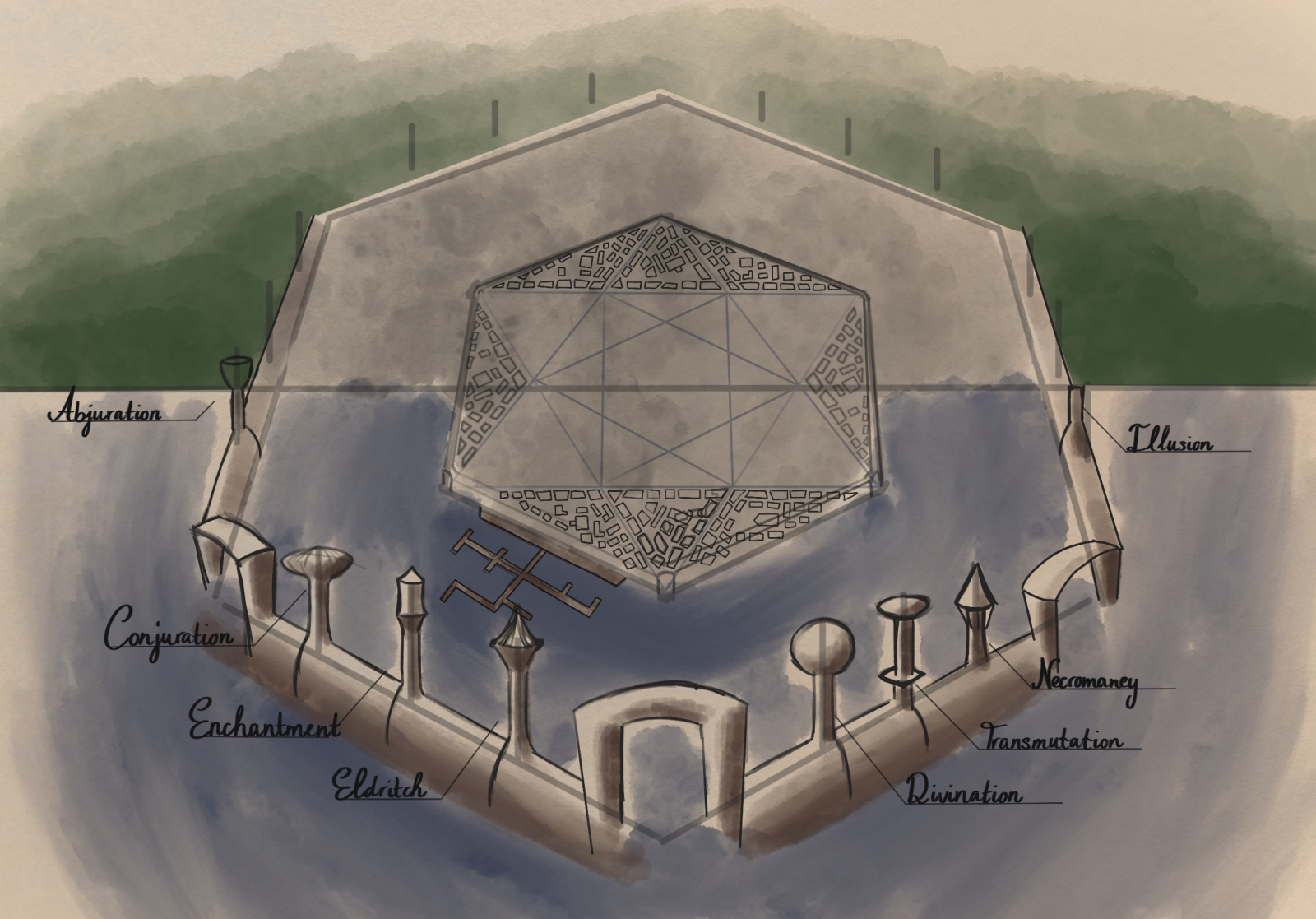 The Cithrean Consortium for Magic is an alliance between all nine schools of magic with the goal of increasing knowledge about phenomena that transcend any single school of magic. Operating from their home town Cithrea, the consortium tries to achieve their goal through research and education.

Most students are registered at one of the magical schools and typically study about five years. Students have the option to choose a minor where they visit one of the different schools for the period of a month to gain some insight into their methods. The only students that are directly enrolled with the consortium are those that follow a one year program that is meant for aspiring politicians and rulers and essentially consists of all minors from the individual schools. The consortium provides many general services to the students such as scheduling, housing, basic courses and issuing degrees.   There are four degrees that can be obtained: Most of the consortium's efforts are focused towards research. The consortium is the hub which links schools together to research phenomenon that can not be explained by a single type of magic. Field-transcending research proposals are submitted to a committee from the consortium which assesses them on feasability, planning and required resources. The committee may allocate grants to the most promising proposals. Consortium bylaws dictate that the committee is required to consist of at least one professor from each school.

The consortium and its students are a diverse and constantly mutating crowd of highly educated expats living in a city with a population that largely consists of long living and slowly changing elves. The peninsula in the middle of the city is almost fully inhabited by students and staff whereas the outer edges of the city are populated by the Cithreans. Some long-term professors prefer to live in the suburbian environment amongst the elves, but most students can go days without meeting anyone that is not directly connected to the consortium or the magical schools.   While the architecture is mostly elven based throughout the entire city, the scholarly neighbourhoods are known for their melting pot of foods, festivals and religions. Religions play an important part in the community surrounding the consortium as divine connections are often a source of magical abilities. The determination of magic users to uphold their divine connections result in an abundance of various churches and communities of worship.

The consortium’s goal is to increase knowledge of phenomena that transcend magic through connecting the different schools and promote collaborations. Aspiring public figures such as court members, non-magical scholars or high-ranking members of the royal guard may receive training in Cithrea. These figures will later function as ambassadors for the school and often contribute research proposals to the consortium based on real-life mysterious phenomena.    The consortium is in charge of upholding magical patenting regulations which are based on the premise that all magic that can be used to better lives must be made available o all. Magic that is condemned as unsafe is hidden in the heavily guarded libraries of the city. Patenting law dictates that users of safe magic are obliged to contribute a fee for each use until the research costs have been paid off. After this period, the fee decreases to a minimal amount and superfluous funds are put towards grands for new research.

The consortium consists eight schools: Abjuration, Conjuration, Enchantment, Eldritch, Divination, Transmutation, Necromancy, Evocation and Illusion. Each school operates from their own tower located on the outer sea walls of Cithrea. The consortium itself operates from several buildings in the peninsula in the middle of the city.   Students are not obliged to pay any fees to their school. Instead, alumni who find a job are required to pay a percentage of their income towards the consortium which takes care of the new generation of students. Entry is solely based on performance in the annual aptitude tests (which contains tests from each school).

The consortium was founded in the third tred by Yelsandorel's daugter. Her belief that nature as a whole is larger than the sum of the parts led her to connect exper magic users and force some scholarly breakthroughs. This led others to see the added value of collaboration between magic schools and join the consortium. It was late into the fourth tred before all schools were physically located in the city of Cithrea, but the founding alliances were formed during the third tred.

Wisdom is knowing where to find knowledge