The robes of a Brother of the Congregation for the Orthodoxy of the Wakeful are one of the few Congregation's robes to follow a prescribed pattern. For many in the Diarchy the periodic visits from the Orthodoxer are their only formal link to the Church and having some level of consistency in appearance was felt to be useful. Religious law prohibits anyone not of that Congregation from wearing the robes; traditionally the punishment was lenient but under the Religious Emergency Laws the punishment, like practically every punishment, is a term in the penal legions. 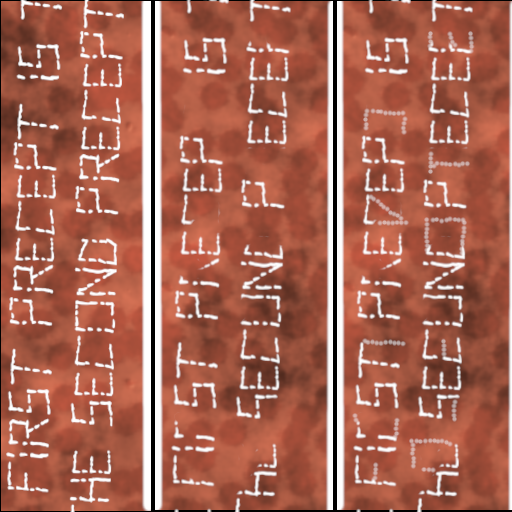 by Author
As the Orthodoxer's life is one of travel, the robes are designed to be hardwearing and not to show dirt or wear too much. The core is a leather tunic with a horizontal neckline worn over woollen hose. These are finished at one end with a wide brimmed hat and the other with a pair of sturdy leather boots. This isn't radically dissimilar from the clothing worn by any other traveller in the Diarchy - perhaps some would add a cloak to it while the Orthodoxer relies on Land's power to keep themself warm. What distinguishes it from everyday garb is the embroidery.   The Precepts of the Church are embroidered "in a size visible to one in conversation with the wearer" across every visible part of the costume. Fashions have changed as to how this is achieved - see the Evolution section below - and the regulations do not stipulate a colour, though white is common as undyed yarn is easier to obtain than most other threads.   This embroidery is the most delicate part of the otherwise hardwearing costume and during the course of the Orthodoxer's travels it often becomes frayed and unreadable. While it is technically the Orthodoxer's responsibility to replace and repair this, in practice the job is often delegated to a seamstress in whichever village they happen to be passing. Due to the lack of general literacy among the peasant population this means that the writing on the robes quite quickly becomes simply lines and abstract shapes of embroidery that kind of replicate the look of writing without actually forming legible words.   The Primate of the Congregation has confirmed that this is acceptable. The important point is that those seeing the Orthodoxer are reminded of the Precepts - that people know the writing is the Precepts not that the writing actually is the Precepts - or even writing at all.

The People Who Wear Them

You. Tell me the Fourth Precept. Good, now, you at the back, what's the Eleventh?
— A priest

The Priestly Brothers of the Congregation for the Orthodoxy of the Wakeful are, to many rural folk, the only link to the state religion. Each travels a circuit of villages taking roughly a season to complete. In each they gather the inhabitants and have them recite the Precepts of the Church - first in order then randomly accessed   On their route they will also consecrate new births and important buildings to Land and often support the Brothers of the Congregation for the Jurisprudence of Land in judging and sentencing religious crimes. They provide a number of important informal services as well - for example they are often serve as healers to the ill or incapacitated in the villages they pass or even as informal teachers. While recruitment is strictly a matter for the Brothers of the Congregation of the Eternal Clergy, it is well accepted that the Orthodoxer's role has the potential to bring them into contact with potential recruits and it's an expected part of their duties to make such people known.   Orthodoxers are seriously under-represented in the higher ranks of the Church. This is largely a matter of choice - the kind of person who enjoys travelling by themselves is unlikely to enjoy becoming a deskbound cog in a bureaucratic machine.   For more, see The Orthodoxer

Perhaps unsurprisingly the biggest change to the robes came when the Twentieth to Twenty Fifth Precepts were added - the mass recall and subsequent mass reclothing of all Orthodoxers being one of the smoother running parts of that chaotic period.   Aside from that, changes have largely followed the unpredictable whims of fashion. The only thing specified about the embroidery is the content and factors such as orientation, size, color and so forth are in the hands of the individual Orthodoxer. The current trend is for writing to run vertically down the body, aligned so the tops of letters are on the wearer's right. However, as picking out all the lettering and replacing it with another form is a difficult job one can get a rough idea of how long an Orthodoxer has been serving by observing the dominant fashion of his stitching.
Item type
Clothing / Accessory

Remove these ads. Join the Worldbuilders Guild
The Faith

Nice article! I like the idea of the clothes being covered with religious precepts, as well as the fact that the seamstress make lines imitating writing because they are illiterate. It's interesting that the religious leaders are ok with this practice.   "Perhaps unsurprisingly the biggest change to the robes came when the Twentieth to Twenty Fifth Precepts were added - the mass recall and subsequent mass reclothing of all Orthodoxers being one of the smoother running parts of that chaotic period." This is a fun details :D   You can use [ quote ]You. Tell me the Fourth Precept. Good, now, you at the back, what's the Eleventh?|A priest [ /quote ] to format that sentence (without the spaces next to the brackets).   I'm intrigued by the "Land's power" and penal legions. I think you could add a short explanation visible with a mouseover by using a tooltip: [ tooltip: Explanation ]Land's power[ /tooltip ] (again, without the spaces next to the brackets).   I imagine embroidering the actual writing is time consuming and so this would make the clothing rather expensive. On the contrary, making lines imitating writing would be much easier and so cheaper. Does that make a difference which type people are wearing? Like a status symbol or a symbol of piety?

Nice read! The illeteracy of the population and how that translates into the percepts being seamed incorrectly over time is quite interesting. Also nice how you added that detail in the image! I still wonder though what the Land's Power is and how this could keep one warm?

Nice article! The precepts embroidered on the robes are very cool, and make the robes really stand out as very unique. It makes sense that this religious congregation would want its precepts in such a good place to remind people of them. What was the punishment for someone not from the Congregation wearing them? Also, was there a punishment for not updating the precepts when new ones were added?

Nice article! I particularly loved the detail about how the embroidery shifted from words to symbols. It says interesting things about this religion that this alteration is entirely acceptable. Good job!