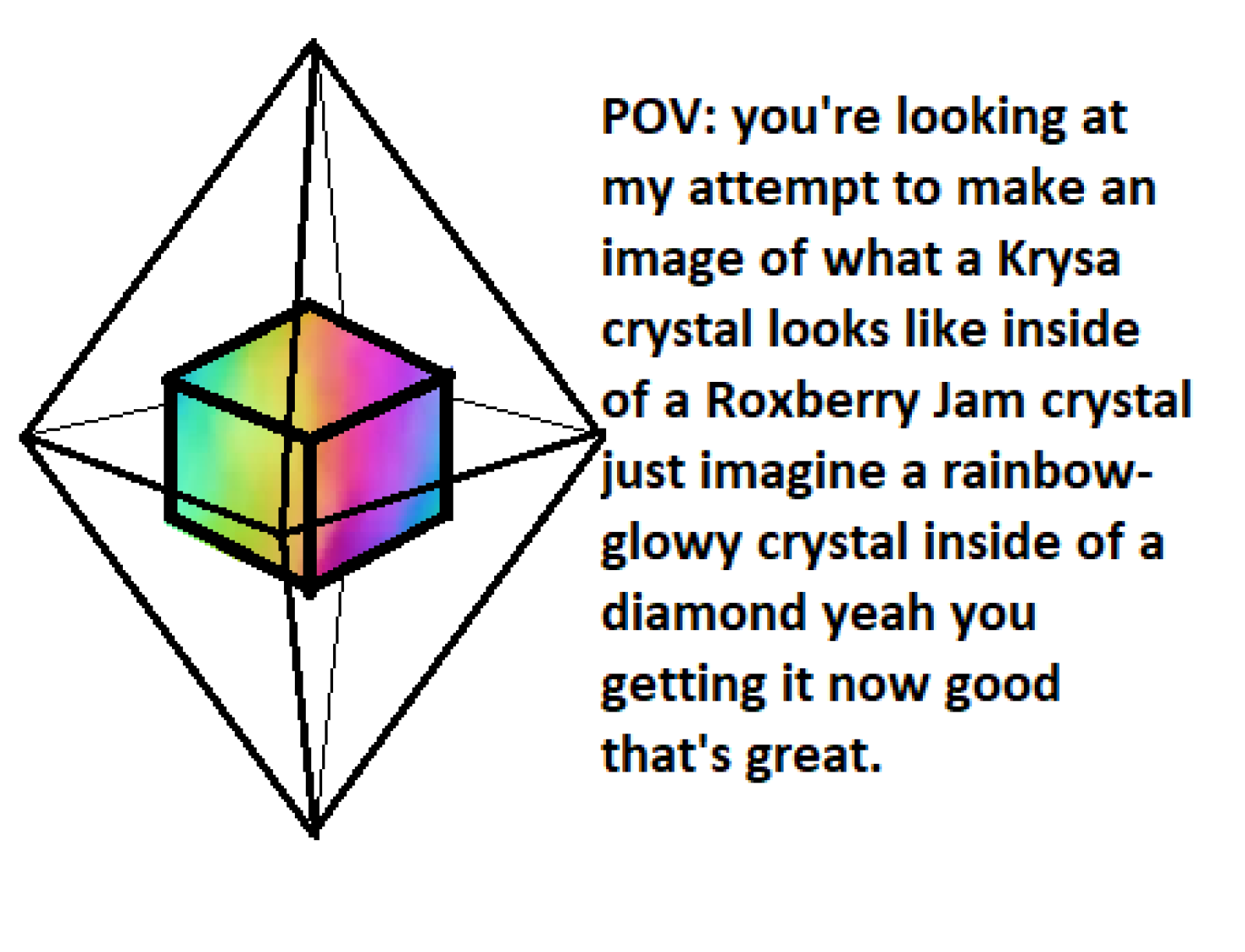 The Krysa are a magic family, magic abilities only inherited from one's mother because mitochondria and stuff, with the power of growing extremely strong crystals from their skin. These crystals are quite the fashion statement because 1. the Krysa are the royal family and 2. only a Krysa is ever allowed to be the Speaker of the God of Gods (basically the Pope), which is a funny way of saying that if these guys were more interested in cooperating with their relatives than bickering with and killing them they could pull some serious Illuminati-tier shit. The history both fictional and real is complex but in short Krysa are considered holy and their powers given to an ancestor for being pure of heart so that they and their descendants could guide the Lamarans, themselves believed to be descended from the sinless/at the very least decent people when the gods did a thing/forcibly relocated the sinless to a peninsula and then filled the rest of the world with monsters, away from sin that would otherwise drive the gods to do a thing again. But here's the issue: Krysa crystals have an extremely complex multi-step chemical magical bla bla it slowly disappears over time in air with a crystal the size of a fist being expected to last about a year. So, how do you, someone who has been given a Krysa crystal by a Krysa and is also stupidly rich, make a fashion statement out of the cancerous crystallised skin of the ever-infighting royals to show off how cool you are in a way that's even cooler without the fashion statement disappearing? Put it in another crystal... a normal one that doesn't disappear with time. . As for where it's used in fashion: jewellery in the most visible places possible, usually in forehead crowns. Some of these Krysa crystals in crystals have been around hundreds of years, even if they're bounced around between different necklaces, crowns, brooches and so on according to whatever the big noble fashion trend is while the commoners increasingly question how much of their taxes is actually going to the running of and protection of Lamara. . . Laws regarding Krysa crystals that apply just as much to these: Krysa can't give away their crystals, only loan them. Because of this it's illegal for someone gifted a crystal to sell it, gift it to someone else or even pass it on in their inheritance. On the death of the person who received it, it's standard practice for it to immediately be loaned to their next of kin by the Krysa who gave it but if this doesn't happen for whatever reason (ie: "I liked your grandpa but you no fuck you") it's given back to the Krysa who gave it, in which case the standard practice then is for that Krysa to go to where their dead buddy is buried and bury the crystal nearby, or if the dead buddy was cremated or given a sky burial or anything like that to otherwise leave the crystal where the funeral rites took place and break it out of whatever's keeping it from wearing away so that it may wear away and go with the dead budyy in the afterlife. When receiving a crystal, the receiver must go to a temple to register this and who they got it from. The temple sends a messenger to that Krysa to check everything's legit and if it is the person who received it gets to keep it. If it isn't then the one who received it can receive any of a wide variety of punishments depending on when and where in Lamara they are, who the Krysa was (expect harsher punishments if that Krysa was royalty), who the receiver was (more important = less problems) and how trigger-happy the priest adjudicating the case is. Yes, this system can absolutely be abused by Krysa to gift people crystals, go "oh yeah they like totally threatened me into it or no I didn't give them that they must've gotten it from someone else by some dodgy means and hoped I'd half-mindlessly say it was fine" and then get those people screwed by the law.

There are none they're just rapid-grown crystalised skin cells that also happen to be harder than diamond placed inside of other crystals with filling of the hole made for this covered with metal.

Step 1: Acquire Krysa crystal. The easiest way to do this is to find a Krysa child, let them pet an animal of yours and then during your goodbyes telling the Krysa child that the animal wants to keep one of the kid's crystals to remember them. Or go up to one and go "please please pretty please gimme gimme gimme I want one please please please just for me please please please." Step 2: Make a hole in a bigger normal crystal that the Krysa crystal will fit perfectly into. Roxberry jam, which is completely clear, can be filled into any gaps and onto the surface of the crystal. Step 3: Integrate into a larger piece of jewellery. This generally includes metal hooking into the crystal that the Krysa crystal is contained within and plugging the hole you made to put the Krysa crystal in there with molten metal (this won't damage the Krysa crystal if it isn't touching air unless you're using some crazy molten metal) so that the bit where the metal goes in isn't visible to anyone when being worn. Step 4: Show off. Also Krysa crystals are hard as fuck so tiny chance of it saving your life if you've got it in a necklace over your chest and that spear that your underpaid maid threw at you perfectly hits the crystal... actually nah then it'll probably slide off the crystal and still kill you pay your damn maids and servants properly you dungead.

Massive cultural and religious significance to Lamarans. It's like having the UK Queen's toenail clippings but if all British people loved the Queen as much as most of their grandparents do.
Owning Organization
Krysa Empire, or "just Lamara": It rules Lamara
Rarity
Common among the nobles, but nobles aren't exactly common.
Weight
Generally light for their size, still heavy.
Base Price
Extremely expensive to make and buy. Nobility and mould-breakers only.
Related Myths

Interesting idea for jewelry! I still have no idea why the mitochondria would cause only the female side of the family to pass on the crystal making :p I wonder though how can you remove the crystals from the skin and does it hurt the Krysa family member?

Mitochondria are the powerhouse of the cell and also have their own DNA separate from the nucleus and the rest of the cell, so their DNA isn't included in the 23 chromosomes you inherit from each parent.

When your biological father's sperm hit your biological mother's egg, the mitochondria in the sperm all died (in some cases a few survive but are dwarfed in number by those of the egg) whereas the majority/all of those in the egg survived. Well, survived is a weird term to use since mitochondria technically aren't alive but you get the gist.

Because of that, all of/almost all of your mitochondrial DNA is inherited solely from your biological mother.

The genes which cause Krysa to have their crystal abilities are in their mitochondria. Because of this someone is only a Krysa, since being a Krysa refers to having the Krysa abilities rather than being a family name (although all Krysa are presumably descended from one original Krysa), if their biological mother is a Krysa.

As for the Krysa crystals being removed by Krysa, they can grow the crystals out and detach them at will, so no harm is done to the Krysa unless they seriously overwork themselves. Especially strong Krysa are even capable of using their crystal abilities to hold up or destroy buildings, making crystals the size of small huts if they please.

They just don't usually give out crystals to people very liberally, not least because of the fashion / prestige statement of having Krysa crystals in of itself making it really rude to ask for them especially if you then proceed to put it in a piece of jewellery to look cool in front of your noble homies.

Ah ok so this characteristic is only on the mitochondria then. Thanks for the extra explanation!

Nice article! This is a very cool idea :D   " actually nah then it'll probably slide off the crystal and still kill you" Exactly what I was thinking XD   I'm wondering about step 1. Those are royal children, aren't they? Are they left to visit without supervision? What do the royal family thinks of having people steal bits of their children's body like that? Are they smug that everyone wants them? Not caring about who gets one? I would think they would make sumptuary laws dictating who has the right to wear such a jewellery and who can't…

I made the bit about royal children mostly as a joke. In reality Krysa children both royal and otherwise are more or less constantly supervised and so attempting this would only work if the babysitter/bodyguard assigned to them at that time was lazy or you bribed them.

I'm adding this because your point on sumptuary laws is a good point. It's illegal for a Krysa crystal that has been given to someone to pass ownership in any way. Once someone has received a Krysa crystal they're not allowed to sell it, give it away or even pass it to their children through inheritance (the crystal is simply buried with that person). They're also required to register it, including the name of who they received it from, and if that Krysa responds to the mail saying "yo did you give someone your crystal" with "wtf no" then the person who received that crystal is getting arrested for fraudulent crystal possession.

The toenail clippings at the end absolutely got me.   But this is such a great commentary on the stuff rich people will wear, like when Kanye West wore a white t-shirt and they started selling them for crazy prices.

Pretty much. If it weren't for the fact that selling them is illegal these would be costing 6 arms, 13 legs and the soul of your firstborn child, and it's not like having a Krysa crystal is all that useful beyond it making everyone simp for you unless the Krysa who made it did so with a shape that makes it useful.

It's purely based in this collective obsession with the Krysa, just like your point with Kanye, although at the very least Kanye has actually done stuff to get this obsession. Krysa are just born and it becomes the talk of the town in every town for miles around, and fawned over by almost everyone by mere virtue of their ability to grow the funky crystal.