Ley of the Land

The largest ley line in the world is easily found, just look up. Where The Lumon passes, so too does the magic current. It is a large river of clouds that hovers above the world, and has a great many properties that are unique due to the high concentration of energy. Sunlight filters through the clouds as though they are clear water, leaving dappled streaks dirctly beneath it allowing the great crystal cities of the mages to thrive.

Shadows dance as small creatures swim and fly though the river of clouds. Each is held aloft by magic that flows in currents and eddies, just as water would. Occasionally a massive shadow will pass over head, and people quicken their pace and make religious gestures to ward off bad fortune. No one has seen one of the giant cloud leviathans, only their shadows as they pass, and none ever wish to see these creatures. Rain falls following the leviathans' passing, and farmers don't see them with the same fear as those who live in the Crystal Cities.

Night on The Lumon

One of the greatest sights is to be sailing The Lumon at night. The spectical has brought artists and poets to their knees in awe. Most have declared themselves utterly inadequate to describe its beauty. Sheets of light dance through the sky above the clouds and illuminate them, while the sunfish pass beneath air ships like tiny suns. The cloud-rushes glow in faint hues of blue and purple, a stark departure from their usual flat brown colour. Flashes of lightning from deeper in the cloud currents add to the light show casting shadows up through the clouds. 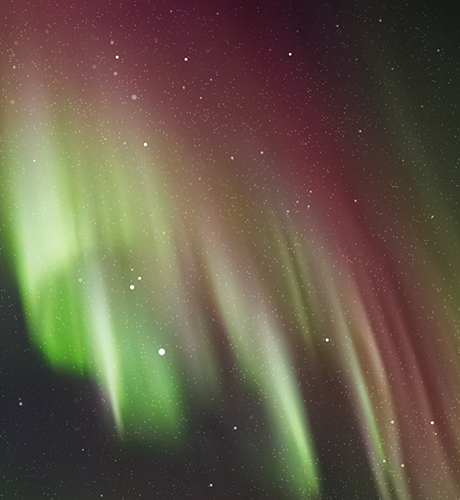 Creatures of The Lumon

The Lumon has a wide variety of life that swims and flys through it. Most creatures here sport a combination of feathers and scales, and almost all seem content to leave travelers alone. Most plants are harvested as components for magic spells and alchemy, most notable is the collection of the cloud rushes. Their billowing brown flowers are harvested in the day and night as their properties change depending on the harvest time.

An unfortunate animal that is harvested for both food and components is the sun fish. Their dazzling yellow scales reflect brilliantly in the day, and glow that same bright yellow at night. They are a meaty fish, and their scales are used for magic and alchemy. 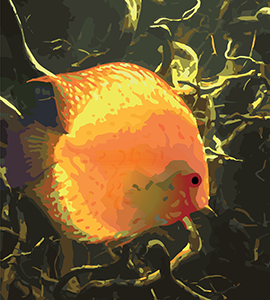 A famous painting of a sun fish. (DepositPhoto) 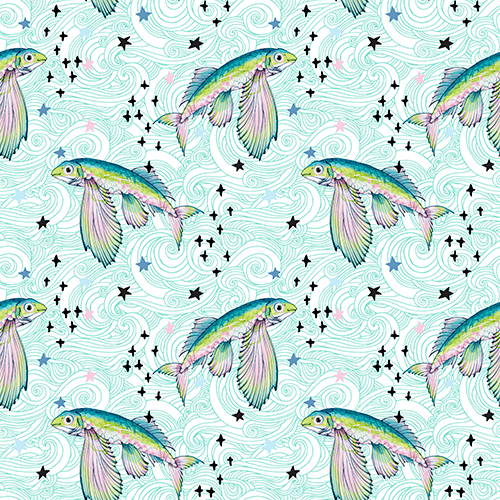 Flying fish are some of the fastest creatures in The Lumon, and will fly away from storms and rough skies on their silvery feathered wings. It is sometimes said that a silver storm comes before a sailor's demise. Most air ships will land as soon as they can once a school of flying fish flash past.

One of the most playful creatures that live in The Lumon are the cloud dragons. These small fluffy feathered dragons are playful and will often crowd the decks of sky ships. It is ill advised to feed them no matter how cute they are as they will follow and beg for more, grabbing at people with their fleshy paw pads. Due to their intelligence they teach this behaviour to their young. They are often considered pests for merchants, but an asset for pleasure cruises, as guests fawn over the cute critters. 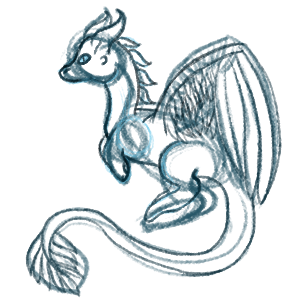 A Sunstone student's sketch of a cloud dragon. (RandoScorpio Illustration)

Growing beneath The Lumon on the contienent of Minyshtil are a series of Crystal Cities. These cities were brought into being by mages who guided their growth, empowered and fueled by the magic in the ley line. There are five cities positioned to take advantage of the up and down currents of magic that help to lift and lower the sky ships that travel between them. The cities are named for the crystals they resemble.

Alexandrite is a towering city of green crystals that are intricately carved. The colour shifts to deep blue hues in the early hours of morning and at sunset. Alexandrite is also considered to be the capital of the Mages Dominion which rules the continent. It's internal archetecture is opulent and displays the oppulence and extravagence the mages believe themselves entitled to as manipulators of magic. Most people who live in this city are politicians and their personal homes are appointed without sparing any luxury they deem that they deserve. This city perpetuates the supiriority of the mages, and anyoone you encountered here would deny any hardships the land was facing, well they'd deny it in public.

Ruby is a fiery city with more jagged construction and the city focuses mostly on developing military technology and magics. It's twin is Sapphire who's blue and purple crystals are softer, and the city focuses on healing magic and medical technologies. All the cities except these two have up and down drafts that connect them with The Lumon. These two cities are divided by a large lake, and connected by a cable car system. The currents drop in Saphire, and rise in Ruby. It is theorized that a leviathan fell from the sky and disrupted the natural currents when it crashed into the ground below. Its impact created Nubesra Lake.

Sunstone is a brilliant jewel on the land, it's coloured in all the shades of sunrise. This is the city where education is persued, it is sometimes call the Star of Knowledge. The crystals used to construct Sunstone are not clear or reflective, instead their colours are opaque and richly hued. Most of the academic dorms and buildings are named for the colours most prevalent in their construction. Examples would be Sunset Hall, Sunrise Annex, and Pink Shimmer Dorm. The majority of the population is students, but there is a quarter that is reserved for scientific persuits led by graduates of the prestigous schools. Few are privy to the experiments that happen far beneath the city and away from prying eyes.

Citrine is a major tourist destination with hotsprings and amusement parks to visit. It was in the yellow city of Citrine that airships were invented and the up and down currents that lifted the ships into The Lumon were discovered. Some argue that Citrine should be the capital city of the Mage's Dominion, but those who live in Citrine are satisfied being a hub of tourism. 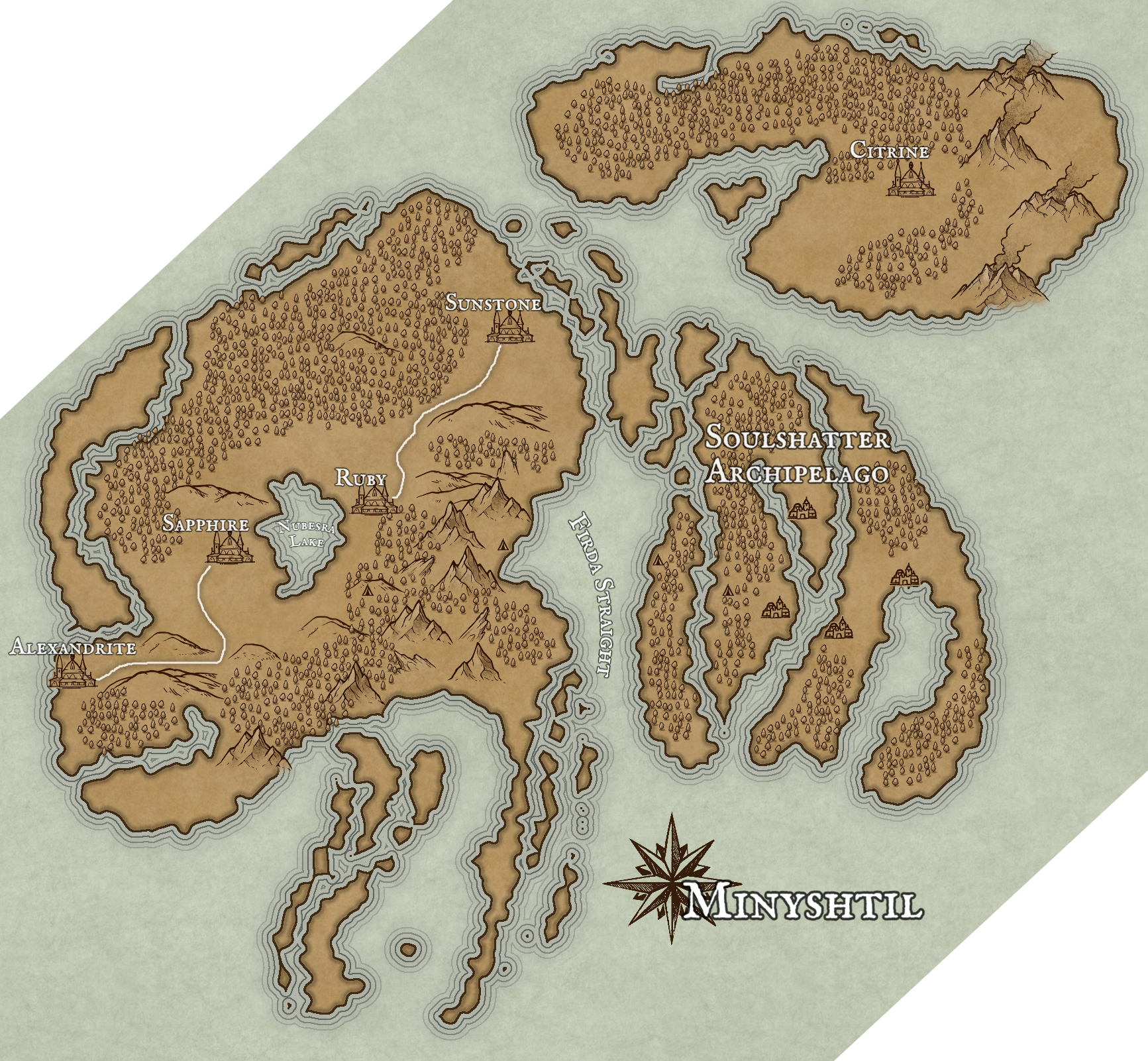 The rabble simply cannot comprehend the importance of their saccrifice.
— Politician Mage

My people are taken across the world like cattle to be used by mages.
— Lumon River Pirate

This lake sits between Sapphire and Ruby, cloaked in cloud cover and filled with dangerous creatures. The water is acidic and burns the skin of those who manage to get close enough to touch it. The clouds are not harmless like those of The Lumon, these clouds are dark and swirl to grab at people and animals that stray too close and pulls their spirits from their bodies. Mages have designs suits powered by magic that repell these effects, and have sampled the clouds and waters of the area. These expeditions are the reason it is known that horrific twisted versions of the bright creatures found in The Lumon lurk beyond its acidic shores. The clouds from the lake have been found to be unstable and toxic, they are studied in Ruby and Sunstone. Students at the academic heart of the Mage's Dominion are against the military's interest in weaponizing the gases.

A scourge on The Lumon, as far as the mages in power are concerned, the sky pirates of The Lumon are a violent bunch who target merchant sky ships. They will tell you stories of captured people and terrible experiments, but every mage will tell you these ruffians speak only lies. There are no slaves in the Mage's Dominion and everyone in the Crystal Cities lives in comfort, and no one has ever met an unhappy citizen.

The pirates never waver in their claims, and only target the ships that carry goods. They have a large network of routes away from The Lumon, and across the land to the Shattersoul Archapelago. Mages will not pursue them to these islands that are devoid of enough energy to sustain their weapons and magic. Some call these islands the Freeman Isles, and despite the claims of Crystal Citizens there are those who seek to find their way to these islands.

The mages can't figure out how the pirates enter and exit The Lumon's flow, and some theorize that these pirates have discovered drafts that deposit their airships between cities. There are many in academic circles who will deny this possiblity, it is understood that mages would have been able to find these drafts if they existed.

I looked out over the green city that stretched high into the sky. Ships were floating overhead, ascending up to the river of clouds that seemed to stretch forever into the horizon. Their immense bulk hanging freely made me frown. Boats belonged on water. My stomach flipped as I remembered I had to get on one of those ships and sail The Lumon. My quest was to defeat a notorious pirate that has been destroying merchant vessels. I sighed heavily as I pushed off the railing I'd been leaning on.
After the events on The Ravmor, I felt uneasy simply accepting this quest. Maybe Zephyr will be open to talking this time. As my thoughts turned to the other 'hero' I wondered if I looked as bad as I felt. I ran a hand through my hair and closed my eyes. It was getting longer, and I wondered if we'd ever make it home. Was Zephyr even from my world?
Stand Alone World Building

Written content is exclusively produced by RandoScropio, unless otherwise stated.

Maps are designed and created in Inkarnate by RandoScorpio, unless otherwise stated.

Images, photos, and illustrations are from DepositPhotos and used under a standard license. Unless stated otherwise.