The entrance to a continent

Falkor's Bay has for hundreds of years has remained one of the only and most important ports on the entire continent of Rienonia being that much of the rest of the continent is surrounded by high cliffs and mountains making travel from the coast impossible. It is ruled by the Kingdom of Eshyar and its King Gabrius IV, both the Kingdom and King have ruled over the region well, bringing much prosperity and wealth, even to some of the most backwater areas. But being such an important site the area is hotly contested by many of the surrounding nations with military forces often clashing in minor skirmishes throughout the bay's borders. War is brewing, and only time will tell which direction it goes...

Day 48:   We passed a small island today, our first smell of land for weeks. I sent a small group of men aboard one of the boats to search it, they found nothing, the island appears uninhabited and has nothing of value. We'll continue along and keep searching, there has to be something here we just need to find it. Something more than endless water surely.   Day 51:   Finally! Something more than a rock in a endless ocean. Land that stretches for leagues, with trees, animals and even people. They seem friendly enough, and wealthy too, must be from those mountains we can just about see. Just wait till the King hears about this, I'll be famous!   Day 53:   These locals seem fond of the word 'Falkor' for whatever reason. It does seem like a good name for this place. I wonder what it means or even who it is or was? We still can't seem to get anything out of these people, they gave us some food in exchange for a few cloths but since then almost nothing has happened. Their language is nothing like ours or any other we know of for that matter. It sounds almost alien to the languages we have grown so accustomed to back home.
I'm sending the Karine and the Cainine to the north to continue searching for more land while the rest of the fleet begins to set up camp a league from the locals village. A few hunting parties have already been sent out on the lookout for food, we're running out fast and I doubt the locals have enough for all of us.
Day 61:   The Cainine returned today, without the Karine. The crew told us of a dreadful storm blowing them into a host of jagged rocks, from what we can tell none of the Karine's crew survived. The Cainine could tell us nothing more than that the coast they had mapped was practically filled with these rocks and there were no place other than where we were now to land. We built a monument to the crew of the Karine, may they be remembered. 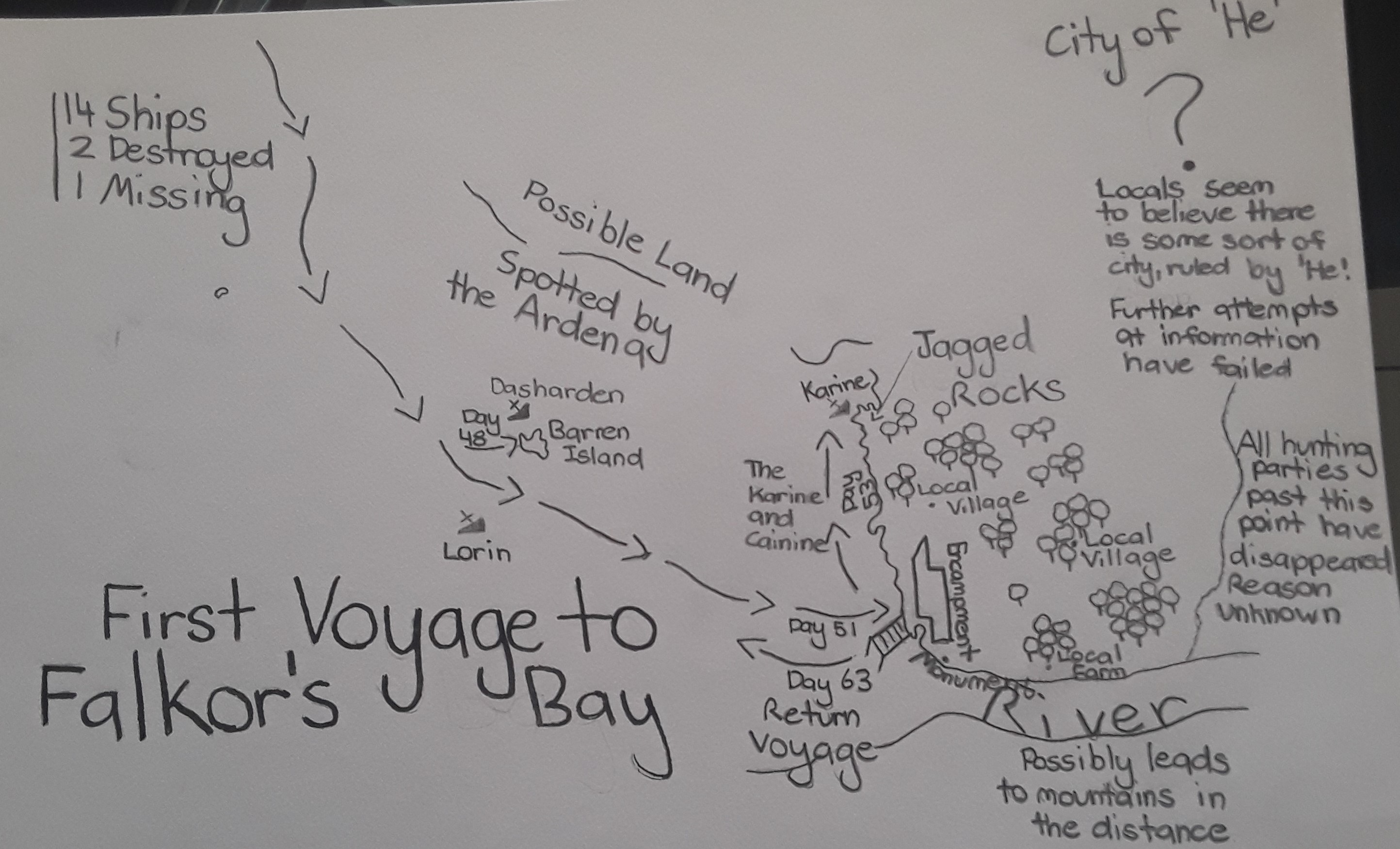 A map drawn by James Jormarth of Falkor's Bay
By SparkyTheSec0nd
Day 63:   After almost 4 weeks we have decided to retreat most of our forces from the area. We will return home and inform the king of our discovery. I will be rewarded greatly for this I can feel it. A new land, a new people, new resources, I expect to be back very soon and at the head of an even larger fleet.     Captain James Jormarth was a Tennaxian and the first man from Fiedon to map any part of Rienonia, that being a part of Falkor's Bay. His discovery allowed for trade to blossom between Fiedon and Rienonia, with the vast majority or goods coming through this bay. He also was the one to name the bay, he named it for a word he often heard the locals speak, as it turns out the locals didn't seem to have a real name for the bay besides the word 'Desoth' although that is perceived to be the locals word for the region not the bay. Whatever the case, Falkor's Bay has stuck in the minds of many.

Karine Monument   After the unfortunate destruction of one of the original expeditions ships a small monument was carved using some of the local stone. It was said to contain the names of every soul lost aboard the Karine. It marks the spot where the ship sets sail. Unfortunately after hundreds of years the stone has been lost, its location now unknown. A unfortunate loss, of such a historical monument.   The Jagged Rocks of Falkor   It is know well known that the Karine was destroyed upon these rocks. They are a large collection of massive and small rocks that make travel around this area almost impossible. As such this area is very lightly travelled even by the most experienced of sailors. Despite the many warnings however, locals often find ships destroyed upon the rocks, which they then pillage for anything they can find. It has been estimated that up to thousands of ships have been destroyed by these rocks, making them some of the most deadly in the world.   City of Lunes

Ha! Lunes is ten times the city Champinen is, I prefer making money than being mugged in a dark alley any day.
-Cassutus Butiro, Eshyr Sea Captain

When the original explorers, led by Captain James Jormarth came to Falkor's Bay they set up a small encampment. Over 2 thousands years later it has developed into a massive trade city between the two continents. Around 30,000 people call the city home, but many thousands more pass through on their way to exchange goods, making the city one of the most profitable in the world.   City of Champinen;   The City of Champinen is the largest and most powerful cities in the entire Desoth region. Unlike its southern neighbour of Lunes, the location the city now lies in wasn't discovered until the third expedition to the Bay despite being relatively close to Lunes. Today it is the capital of the Kingdom of Eshyar with 80,000 people living within its borders. Like Lunes many traders come to the city and while not as many as Lunes, there still is a sizeable amount. It has also become well known for its crime, with many thieves and murderers hiding within its walls.   Demon Mountain Range   Across any map of Desoth you will quite easily spot the massive Demon Mountains. They are a large range of mountains that spread across the north coast all the way across the continent. The largest peak reaches almost 7,000m and is known as the Peak of He, named for the deity the locals believe in.   These mountains were named by a Tennaxian explorer during some of the earliest expeditions to the continent. Before they were named they were simply referred to as The Mountains by the earlier explorers. There has been much debate around the naming of these mountains, the most commonly accepted theory is that the original explorer was horrified by something he called 'The Demon', hence the naming of the mountain and while there are multiple other theories, most scholars agree with this theory. Other theories include it being a simple name that the explorers liked, or that it was the locals themselves who named the mountains, although that has been disputed by numerous historians.

For possibly thousands of years prior to the Tennaxian explorer's arrival the locals believed in 'He'. Further research done by many Fiedish scholars has shed little to no evidence about anything relating to 'He', besides that he resides in a city far to the north. But even after 2 thousand years of exploration nothing has ever been found of this city making many sceptical of 'He'. Even still the locals seem to believe that he exists, just that he hides from those who do not believe. Many of these same locals claim to have visited and even lived in the 'City of He'   The truth behind this is one we may never truly have an answer for. The locals certainly believe it, many of those from Fiedon however, stick to the Church of the Ten for there beliefs. Although a few dozen cases are known of some who came from Fiedon becoming believers after having visited the city itself, although these claims haven't and cannot be validated.

The vast majority of the resources in Desoth are either timber or fish. Vast forests once stretched throughout the area, but as more and more people flocked to the area, tree were cut down aplenty for use in building. Now forests are much less common, although there are still some areas with massive amounts of trees. Fishing is the primary trade for many of the coastal ports and cities, and many seafarers make a living off of the valuable fish located in the bay.   Apart from just timber and fish there are a few mines mainly focused on iron and coal, although a single gold mine does exist. These mines are located in the Demon Mountains and are usually serviced by many of the towns close by in conditions often compared to slavery, although the men controlling these mines would never call it that. Despite this, the Kingdom of Eshyar allows the mines to continue, despite slavery being illegal in the Kingdom.
Desoth
Open full size
A map of the Rienonian region of Desoth
By SparkyTheSec0nd
Cities & Towns
Alternative Name(s)
Desoth (Region)
Type
Bay
Owner/Ruler
King Gabrius IV
Owning Organization
Kingdom of Eshyar
Contested By
"Trust me lad, don't even try to land from the east, your more likely to end up a shipwreck than find someplace to safely land. You should come in instead from the west, a longer journey to be sure, but a safer one and as a bonus, Falkor's Bay is one of the most beautiful places I've ever seen."

The southernmost continent of the world of Transola

The richest of all Rienonia's nations


Remove these ads. Join the Worldbuilders Guild
Other Locations

Tweet
Join Transola Discord!
All content is property of either SparkyTheSec0nd, Blocky or TimePixel unless stated otherwise.

Hi ! Nice job with this article. The idea to present it as an explorer's log, and to use a crudely handdrawn map makes the whole thing seem a bit more real! I can't help but wonder how the relations between the locals and the colonizers will evolve. 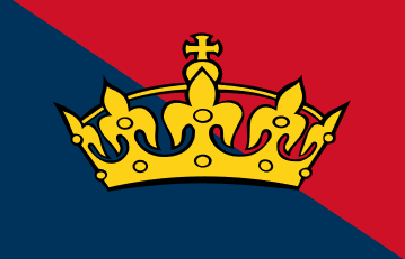 Thanks! I will definitely do something about the relations with the colonisers and locals. :)