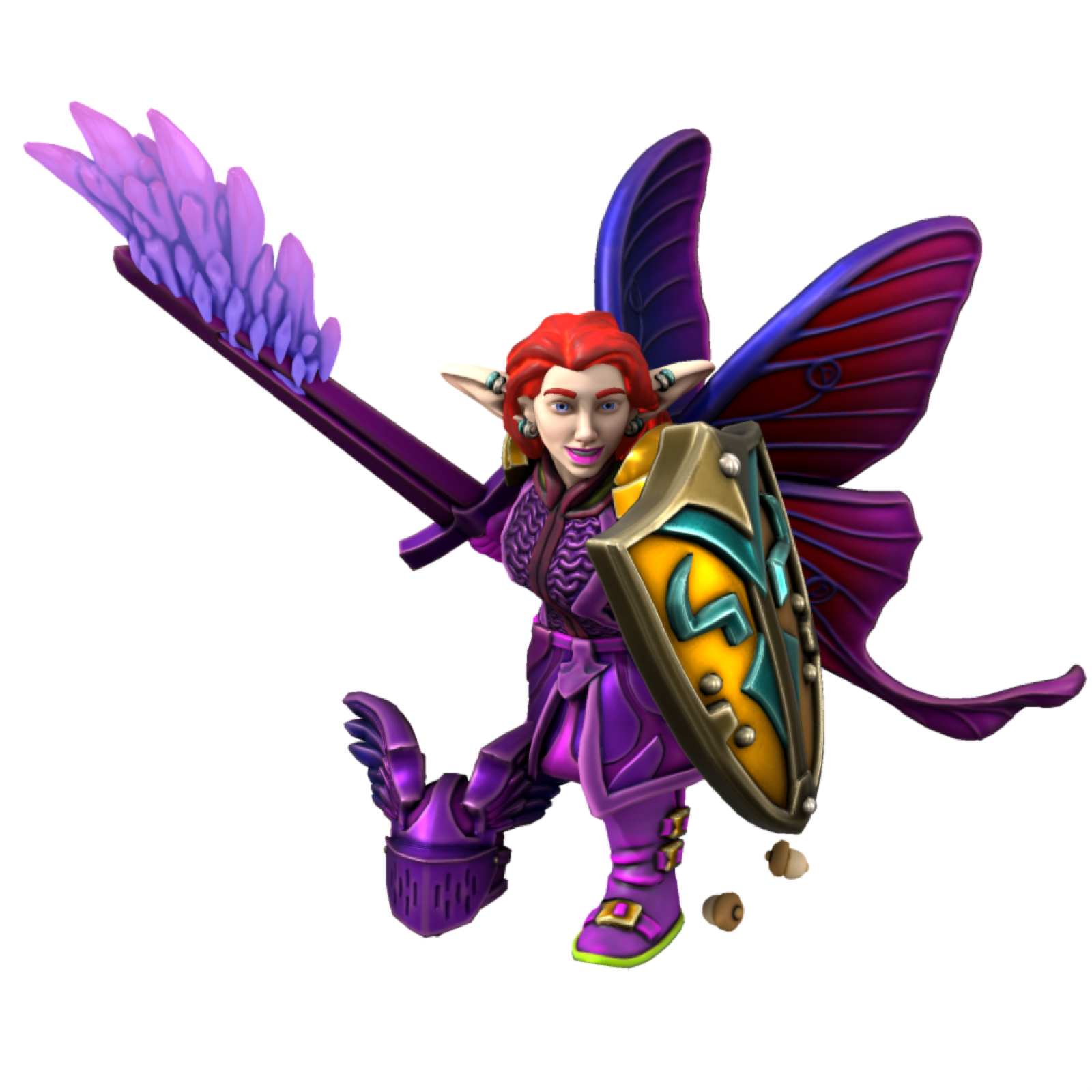 Andi is in great physical shape.

Andi puts a whole lot of sexy onto a three foot frame, she is curvy and soft and just exudes "snuggly".

It is said that Andi's smile could melt the Winter's Bite Glacier, which may be true. She is however, perpetually smiling.

Andi can fly in any area that she can outstretch her arms, so she rarely walks anywhere.

Andi is usually dresssed in purple and/or pink

Andi has a magical Holy Sword and A magical Dragon Lance.

Andi always knew she would be a Priestess of Carmen. Everybody did. Andi sang before she could talk and played instruments before she could walk (like all Allyriposa she could always fly, as a matter of fact, she was exceptionally good at it.) As a small girl of the equivilent of about 5 years old, Andi witnessed the Goddess, and her whole life became dedicated to her.

When Andi was about 20, the Goddess Carmen Dragonsong came to the City of Sende, as she was wont to do, and began to regale the populous with song and story (also as she was wont to do). A tiny little Andiallyra, with all the fear of a Fairy Dragon, approached the Goddess and asked if she, Andi, could sing for her. Carmen agreed and Andi made up a song on the spot for the occasion, about the Goddess' visit to Sende. So catchy was the tune that it earwormed the goddess for months following, until she had to return to Sende and find the little girl with the golden voice and hope that a 20 year old would remember enough of the words to get the song out of her head!

Finding the child proved easier than she thought as everyone she asked seemed to know immediately who she was referring to and directed her along to find Andiallyra, the daughter of Terrena the Vintner and Valdon the Confectionist. As she navigated the "streets" of the World Tree, she learned more and more about everybody's darling, who brought joy to everyone she met.

The girl sat crosslegged in front of a large, and obviously prosperous, Candy Shop busking for pennies. She had drawn somewhat of a crowd, and Carmen was forced to stop her approach. Then she heard the child speak, and she said "Y'all are really nice to gimme pennies and i don't wanna say anythin bad, but y'all are blocking Carmen from getting in my dad's shop." This was met with uproarous laughter until the, now moderately horrified, allyriposa realised she wasn't joking.

Andi began collecting her pennies and said "Andi. Only my mom calls me Andiallyra and that's how I know she's mad."

"Andi it is then"

Carmen explained her earworm dilemna to the 20-year-old who, to her delight, not only could remember singing the song, she still had the song memorised. So she taught the song to Carmen, and Carmen gave her her blessing. Before she left, she bought 2 kg of Valdon's sweets to deliver to her next stop, her brother Oolong, and said to Andi as she left, "You have it in you to do anything you set your mind to, you could lead my church and my heart, and kindle the coldest heart to flame. Your smile is magical.

Andi just smiled, and went on to become the youngest Churchhead on record, leading the Church of Carmen, as the Mistress of Song at the age of 90, and from there redeeming the lost soul of Oolong Tesseract-Troi, and earning his love and eternal devotion.

Andi was educated, like all Allyriposa, in the Public Schools of Sende. When she was 50 she left the public school system to become a warrior-nun in service to the Lady of Song and continued her education through the Church. She is educated as a Vintner (wine maker), Appiarest (bee keeper) and confectionist/chocolateer (candy maker) in addition to being both a Bard and a Paladin (of Freedom).

Andiallyra is both the Mistress of Song and Duchess of Sende, she is a Knight of the Dragon, and a General Officer in the Armies of Alarah.

Andi is the youngest Churchhead in the history of the Allyri, having risen to the rank at the age of 90. The is a Dragon Knight, a General, and a Duchess. She would say that her greatest accomplishment was meltinig the cold heart of The Black Dragon.

When Andi was 80 years old, she was kidnapped and raped by brigands, this left her traumatised and generally afraid of being alone with men. The exceptions to this rule are Tazerak II, Oolong and Valdelock she is totally comfortable around them.

Andi is motivated by a sincere desire to make every moment better than the last for the people around her. She is totally in love with her lover Oolong and her wife Kylikki and would do anything for them.

Andi sincerely doesn't understand and totally dislikes mean people. She likes pretty much anything that could be described as "yummy", "soft", "cuddly" or "pretty".

Andi is oblivious to the violence inflicted by her loved ones upon the "bad guys", she sincerely believes "Love Can Conquer All"

Andi is impeccibly clean and groomed

Andi is married to the Lord Magistrate Kylikki of Sanctuary and involved with Prince Oolong Tesseract-Troi. She is the Head of the Order of Vassals of the Dragon, and the Mistress of Song

Andi is the Head of the Church of Carmen Dragonsong

Andi has most of her wealth tied up in the hoard of her draconic companion, Sunshine but they are both fabulously wealthy. 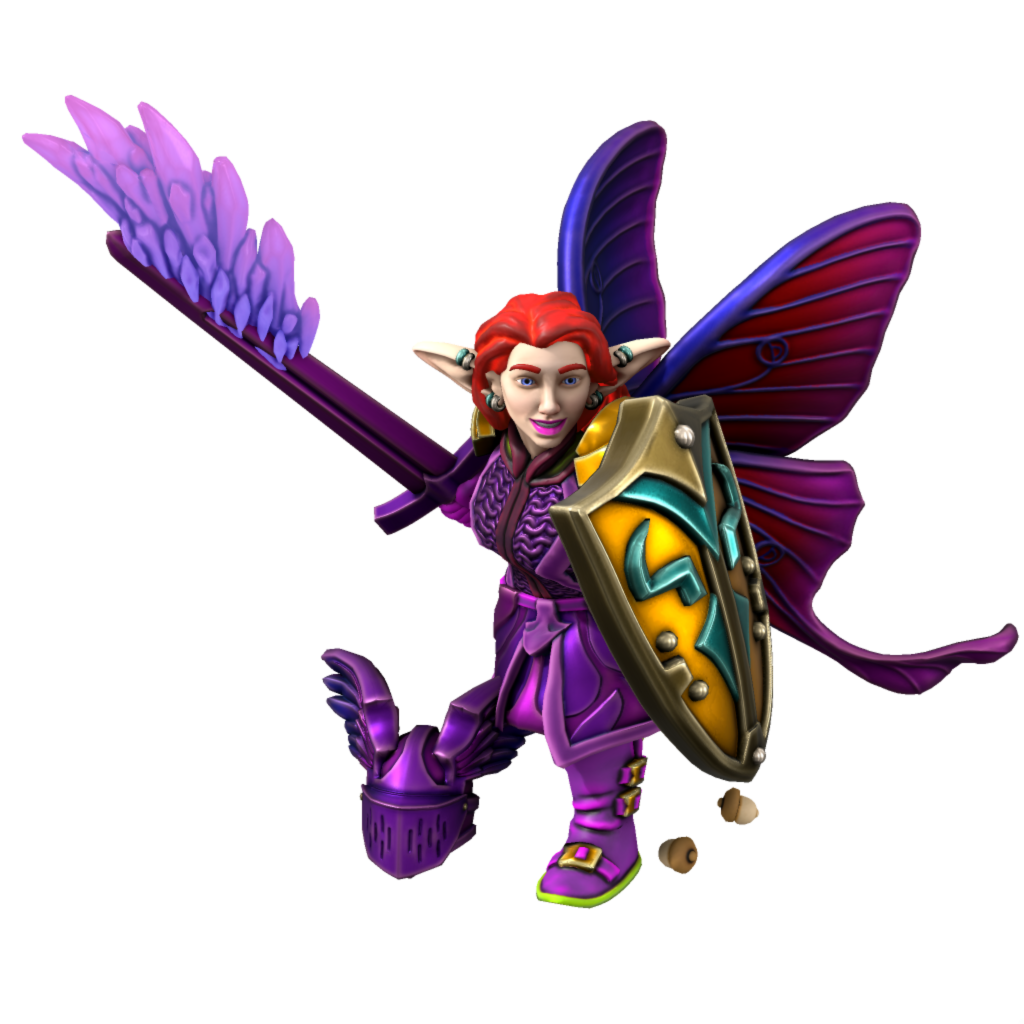 Answering: "a Romancer, Paramour, or other amorous individual"
Visit ErinRigh's Competition Page Check all other answers to this prompt Competition Homepage

~ Thank you for your support! ~
If you couldn't tell by the elves, orcs, and magic flying sailing ships in space, this is a work of fiction. Any resemblance to people or locations, living or historical, is purely coincidental, with the exception of Alberdingk Onestone, who may actually be an alternate dimension's version of a famous scientist, only as a gnome.
The Toy Soldier Saga is copyright (c) 1995 by Diane Morrison. All rights reserved.