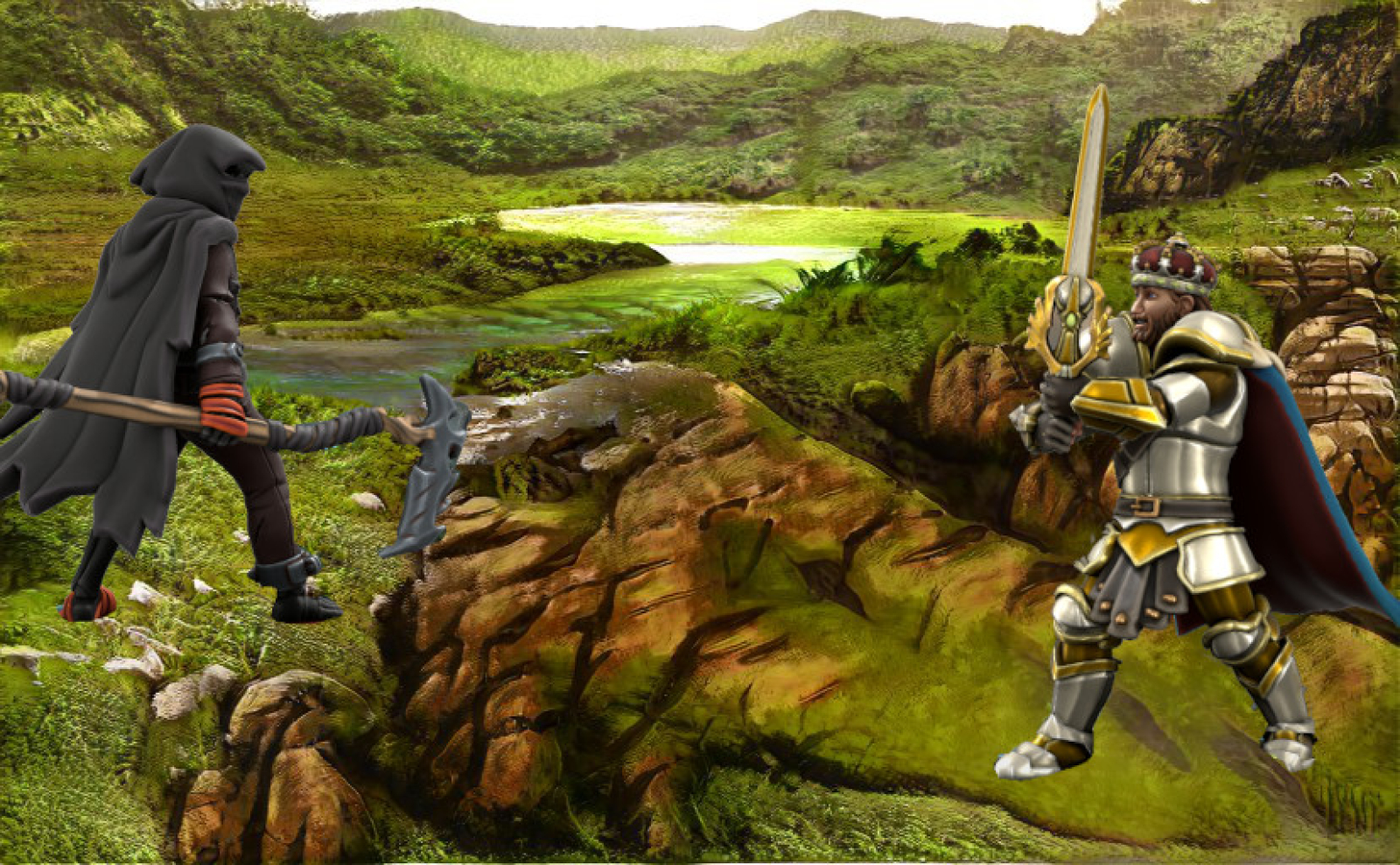 Likely the most famous painting in Totania, Justice Hurts depicts the final battle of the Dreamless Sleep, between the first King of Humanity Gellark Lionrage and his mentor and father figure, Varth Dreamless.

Justice Hurts has two major focal points: the Human-like paragon of justice, the Ace King Gellark Lionrage, and the shambling skeleton is the Death Mage Varth Dreamless.   The painting is set in the fields around what would become the Human capital city of Nerodil, where Varth Dreamless is mindlessly wreaking havoc.   It is said that Varth's pose in the painting depicts him locking onto another target to spread death to, unaware of any relation or love that was once there between himself and Gellark.   As for Gellark's pose, he is clutching his blade as if his hands were a vice. It is said that when Gellark wielded the sword that stood against Varth, his fists contained blisters for the rest of his life from how tight he gripped his blade. Yet still, his iconic smile is what the painting is centered around. A smile through the pain, to reassure Varth that Gellark will be able to protect his people.   The name of the painting comes from this feeling conveyed by Gellark Lionrage within it. One of acceptance and acknowledgement of what must be done. Yet still, pain. The artist, Korras Commonbrush, once said his thoughts on justice as they relate to discussions he had with Gellark Lionrage, as well as the Mortal God Amoth. From here, the painting was named:

"Justice is a painful process where suffering is all but guaranteed. When the right thing to comes to pass, few are happy. In the end, we cannot ask what people feel when we do what we must. We must only ask what is correct, what will bring forth change to transform our world into one where all can live happily. The eternal happiness must outweigh the temporary discomfort. The temporary pain. That is justice. Justice Hurts."
— Korras Commonbrush

History of the Dreamless Sleep

Varth Dreamless was the first leader of the Humans when they appeared on Totania. He had been entrusted with not only leading them, but taking care of a young Gellark Lionrage before they appeared here. 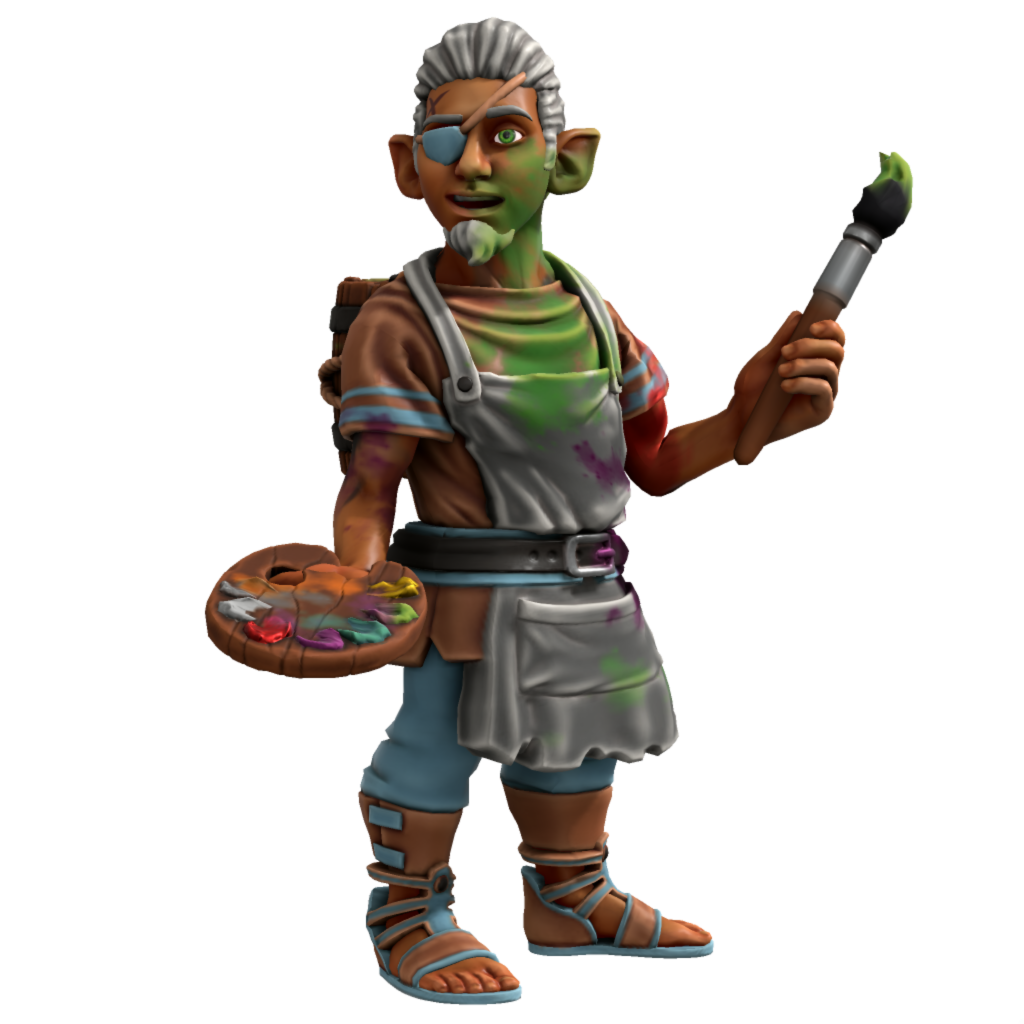 Korras Commonbrush (-88-65) was a painter who lived in the city of Stallbourne. He is best known as one of the carriers of Amoth's will who helped to found the World Court, as well as being one of the warriors who stood alongside Amoth in the War of Mercy.   After helping Amoth ascend to Godhood and founding the World Court, Korras settled down in Stallbourne. He was present when Gellark Lionrage led Varth Dreamless to Stallbourne in the year 1, having only just returned from Heaven.   Korras watched Gellark's battle in awe, and would go on to be an advocate for Gellark's ideals in shaping the World Court into what it became. Korras was the mediator between Amoth's views and Gellark's views, becoming known as "Amoth's Negotiator."

Remove these ads. Join the Worldbuilders Guild
The Humans came into conflict with the Goblins, as the Goblins would not let them settle in the land that the Goblins were living in. Varth led the Humans against the Goblins many times while training Gellark.   Ultimately, Gellark was captured and the Humans were displaced. With no other options, Varth went to the Goddess Morrigan for help. She gave him her blessing and Item Magic: Death Magic. With that, Varth became a mindless servant of death, taking out Goblins and Humans alike to clear the land.   In the moment he saw him, Gellark knew he had to stop Varth. He knew he was the only one that could. To bring justice to the man who taught him would be painful, and he hesitated, but ultimately he decided he had to fight and stop Varth. That was the way he had to bring justice, by stopping one he cared about most. No matter the pain, it was the right thing to do.   Here is the soliloquy of Gellark Lionrage in Getoh's A Dreamless Sleep play in the moment of his hesitation:

Gellark
Varth, this can’st be thine face I now behold,
The eyes filled once with love sink now to death
And the hands that had raised me from mine youth
Now cut me down to meet thine own maker.
This be not you, for if ‘twere truly you
Then what, perchance, am I? I, your pupil,
When you hold no longer eyes. Have I sunk
Too, into the darkness, where’s nothing left?
If ‘twere true, why do these tears of mine fall
When mine eyes should be sunken as are yours?
How am I to face you, whether it be
In combat, as a student, or a man
If my tears do cloud my words and judgement?
I must not, either retreat now from you
And allow your rampage to continue,
Or I must sink mine own eyes as yours are,
So that I, your student, am strong not weak.
Let my blade carry your frail soul onwards
Towards the graveyard of the stars above,
And let it not hesitate to swing so.
Yet, why doth my blade not raise against you,
Why must my bones shake as I stare at yours
Unable to act, whilst fully aware
Of what I must do? Must it be conscience
Telling me ‘tis wrong to kill mine father,
Even if not by blood, but by bond alone.
Perhaps it is not conscience either, but
Emotion that holds my blade back from you,
Or else, what be the meaning of the rain
As it storms down from the clouds on my face,
Which darken each day I lose sleep, for your
Crimes and deeds keep me up and torment me.
What type of executioner weeps so,
As to show grief before the blade is swung
And make the final moments ones of pain
More than the pain that thine death shall carry.
So I will cease my tears, as you do yours,
And welcome you to Hell with but a smile,
As your happy pupil ends your sad life.

Ultimately, Gellark was able to outrun Varth and, with the help of other powerful fighters like Narkard Leran and Perzita Theldrar, get him to Stallbourne where the burgeoning World Court and Korras Communbrush were stationed. There, they detained Varth and he has been locked up in the World Cell ever since.