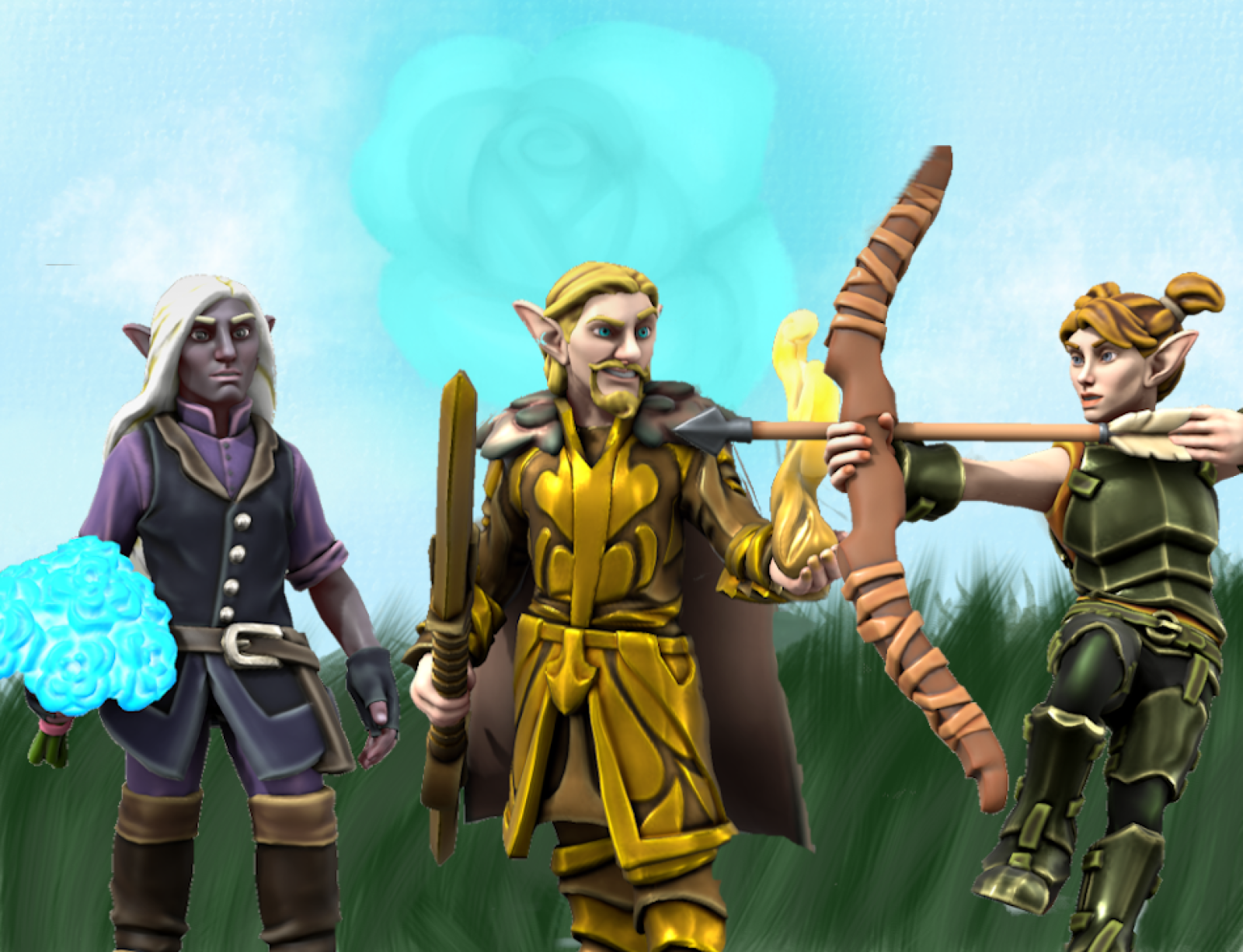 The Elves are not the most populous race in the world, yet they are the only race to have always been listed as one of the Three Major Races, a ranking of the most powerful and influential races in the world. They have often been joined on said list by the likes of the Kenku, the Dragonborn, the Humans, and the Dwarves, yet none have been as consistent as the Elves.

Elves mature at the same rate as humans to adulthood, reaching maturity at about 18-19. It is then that their biological clock is thought to freeze, or at least slow down immensely.

Most Elves are herbivores, subsisting off of a diet of plant-based foods. High Elves eat only vegetarian foods, while Wood Elves are known to hunt on occasion for food. Dark Elves are the only exception, as they normally eat meat due to the lack of vegetation in their caves. Aside from the rare mushroom, Drow eat animals.

Elves often have thin, angular faces and thin angular eyebrows to match. This has been called by some humans that met them "Resting Bitch Face."

Elves only live on the continent of Elone. There are three major locations in the world where Elves live, each of which holding a different variation of Elf.

Camor is the capital of the Elven Empire, and the only major city of the High Elves. The City of Gold, Camor is a ringed city with three rings.   The Outer Ring is surrounded by the first wall, which was named Hal Tas. This is Elvish for Weak Wall, as this wall is often considered to be decoration by most High Elven nobles and royals. The true first line of defense to the nobles is the outer ring of the city itself, the districts of commoner High Elves that live in Camor. To the nobles, the commoners are "the strongest defense" that protects their lives.   The Middle Ring is a mixed ring. Mostly, it is populated by nobles, which is what gives it the title of the noble districts, however there are sparse districts within the Middle Ring that have commoners living in there. However, these commoners are almost only commoners who provide a good or service necessary for the nobles. Most notable among these is the Valhana Tavern in the southern district of the Middle Ring. The wall around the Middle Ring is Ik Tas, or Strong Wall. The nobles believe Ik Tas to be impenetrable, which is untrue.   The Inner Ring is the Royal District. It, unlike the other rings, is home to only one, large, district. The wall around it is simply called Za Tas, the Royal Wall. It is considered the grandest wall in the world, which keeps the King and those around him safe. The Royal District is filled with both those of the royal Elven family as well as those nobles of higher status. A famous example of a noble family that earned its place in the Royal District is the family of the Elven Hero Heiven.

The Dark Elves, or Drow, live within the Drow cave. The Drow Cave sits below the mountain Erkatam Silath (Dwarven Mountain) in Dwarven territory, which in Dwarvish is known as the opposite, Olv Urngor (Elf Mountain).   Within the cave spans a gigantic city. The Drow arbitrarily divide this one, large city in the cave into smaller cities, yet any visitors have found themselves lost due to the interconnected nature of the cities in the cave. At the center of these cities is the Temple of the Stemine, where Drow will often go to visit.

On the edge of the Drow city, within a branching part of the cave, is the Depths. The Depths are not the home of any Drow, but instead begin with the lair of the Dragon Lord of Purple who the Drow also revere, Jarrur Lord of the Dark. Heading deeper into the Depths will lead you to the residence of the remaining Mindflayers and other abyssal creatures that made their way to Totania. It is believed that there may even be a gateway to the Abyss in the outer reaches of the Depths.

Elves consider themselves the smartest race on Totania, yet this honor is held by the Dragonborn. Despite this, the Elves certainly hold a place up there alongside Dragonborn, with a very high average intellect.   Much to the despair of the High Elves, it has been found that Dark Elves even have a higher average intelligence than they do. Yet both are incredibly high relative to many other races in Totania.

This is a common phrase used to exaggerate the power of Elven eyes, but it is not as farfetched as one may believe. Elven eyes have an immense radius of sight, seeing far beyond the horizon a normal eye would be able to see.   Elves are also known to be incredibly magically adept, often considered the second most powerful race of mage (first being Dragonborn). Elven mages are known to have certain affinities, and there is a rarity among some of them. The Elven affinities, in order of rarities, are as follows: It is immensely rare for there to be an Elven Earth or Dark mage, and even an Elven Fire Mage is uncommon. Wind and Water are the most common affinities, especially among High Elven commoners, as well as Drow and Wood Elves. Earth Magic is most common in Wood Elves, with it being rare for any High or Dark Elves to have it. Dark Magic has only been wielded by a non-Drow Elf on one occasion. Light magic is the most common affinity among the High Elven nobles, yet is a rarity for most other races to possess.

In Elven society, beauty is everything. If someone is not beautiful, then many Elves will scorn them, and they could even be thrown out of society or cast down to the slums of Camor, even if they were a noble. Due to this, surgery is common in Elven society, and it is also why Elves try to dress as nice as possible, to accentuate their beauty, or to distract from their potential bad looks.

Elves have not always been focused on achieving new discoveries, instead relying on things that Dwarves, Humans, or Dragonborn find instead normally. Despite this, there are some things that Elves have found themselves wanting to discover.

Chief among these discoveries is Elf Gold, also known as False Gold. Elf Gold is a cloth-like material that looks identical to gold. The only external difference between Elf Gold and true gold is the texture, as Elf Gold is soft like cloth, and much easier to wear. It is also much more abundant.   Elf Gold was created due to the High Elven love of gold. There was an immense demand for gold clothing, and while some Elven nobles didn't mind wearing real, heavy metal gold, many hated it and refused to pay such exorbitant prices for something that they couldn't wear.   It wasn't until Zenzion Gentoris, a High Elven commoner who had spent some time in his life in Dwarven mines stealing Gold for the noble High Elves. Zenzion went to his brother, Paefros Gentoris, a fashion designer, with an idea. The two began a study on the properties of gold and cloth, eventually finding some similarities in their structure. After 300 years of research, Paefros passed away.   Yet Zenzion lived. And soon after his brothers death, he cracked the code. He created Elf Gold, which the Dwarves who were incredibly familiar with metals called False Gold. Yet it was a hit, and is still one of the most common thing to see Elven nobles, and especially royals, wear.

Outfits decorated with precious metals, like gold, silver, and other such metals, are incredibly common among High Elven nobles. Even clothes mimicking these metals are traditional for the nobles, with Elf Gold as its base material. Outside of that, High Elven nobles wear the fanciest things they can find.   High Elven commoners have a slightly different form of dress. Some attempt to mimic the outfits of nobles, while others simply dress in whatever they can find. Still, they attempt to look good.   Wood Elves wear green. This is something that is true for almost all Wood Elves, as it is used to help them blend in with the forest around them. Some may wear browns or other common colors in the forest, but often they will wear some kind of green.   Dark Elves often wear darker colors, such as purples, which are used to represent their loyalty to Jarrur, Lord of the Dark, the Purple Dragon Lord they all revere.

Elven Historical figures are incredibly well known in the world. As figures that have had immense impact on not just Elven society, but the shape of the world as it stands in every era, these names are common for children of nearly every race to learn.

Elves think badly of every race in the world, believing themselves to be better. While in most cases, people would think this only applies to High Elves, it is actually true of Wood and Dark Elves as well. It is just that High Elves think themselves better than the other Elves as well, Dark Elves believe that High Elves are terrible while Wood Elves and themselves are equal, and Wood Elves believe that all Elves are equal but all other races are beneath them.   Worst among these views is the Elven view of Half-Elves. Half-Elves are scorned in every form of Elven society, as mixing with the blood of a species that is not Elves is frowned upon. Half-Elves are not welcomed anywhere in Elven society for this, whereas other races could find a way to survive in the land of Elves.
Lifespan
750 years
Average Height
1.8-2.4 meters
Average Weight
81 kg
Geographic Distribution

One day of the year where Elves steal whatever they can get their hands on.