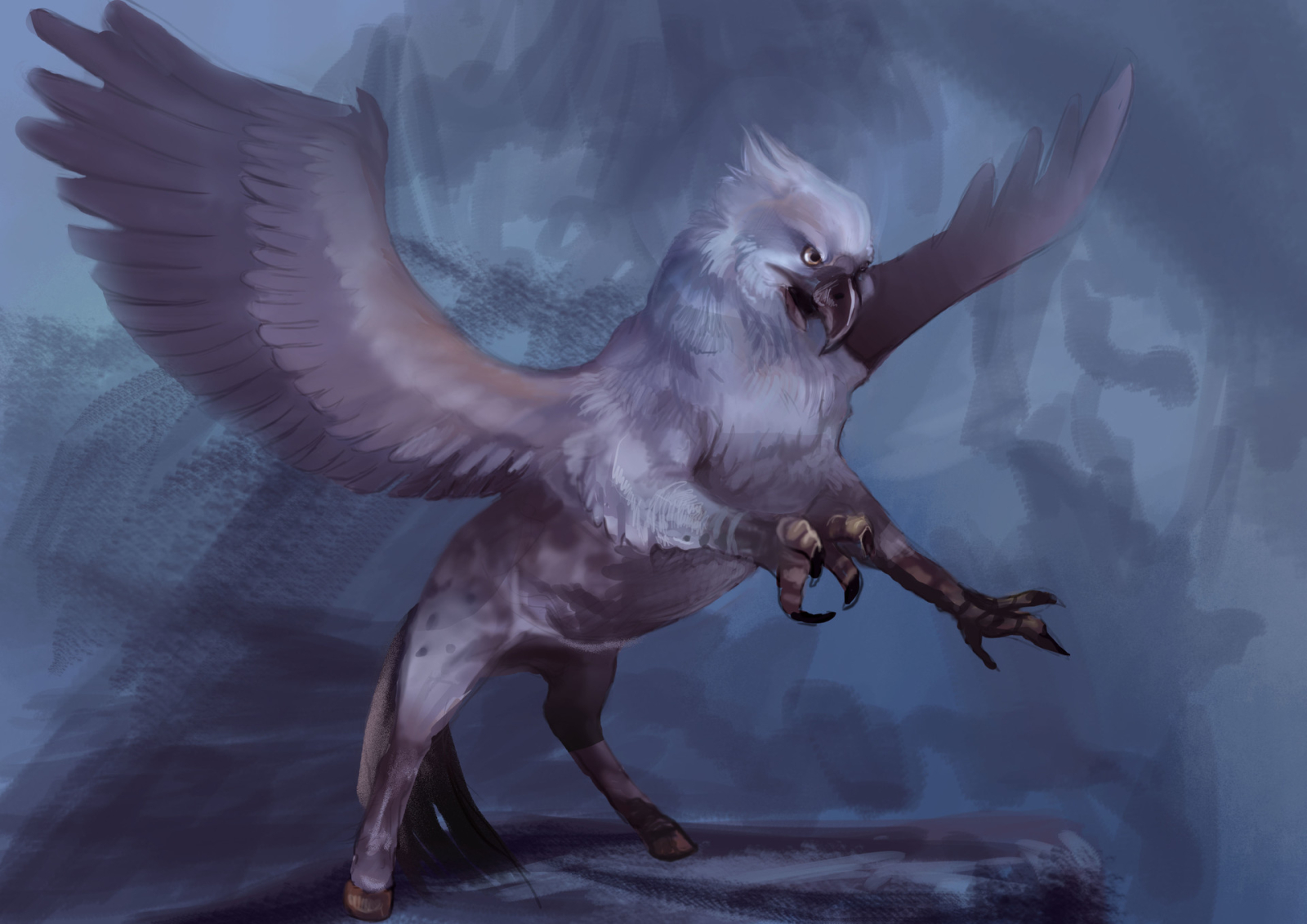 "Half horse, half eagle creatures, immensely proud and extremely dangerous."
— Description of a Hippogriff

Hippogriffs are chimeric magical beasts related to griffons. However, they possess the physical characteristics of horses, rather than lions. Hippogriffs are highly intelligent beings; far more than mere "mounts"

Hippogriffs have the bodies, hind legs, and tails of horses, but the front legs, wings, and heads of giant eagles, with cruel, steel-coloured beaks and large, brilliantly orange eyes. The talons on their front legs are half a foot long and deadly-looking.
It is stated that, once you get over the initial shock of seeing something that's half horse, half bird, you start to appreciate the hippogriffs' gleaming coats, which changed smoothly from feathers to hair. Hippogriffs come in several different colours, including: stormy grey, bronze, pinkish roan, gleaming chestnut, and inky black.
The average hippogriff is 9 feet long, with a wingspan of 20 feet (6.1 meters), and weight about 1,000 lb (450 kg)

Hippogriffs are reclusive in behavior, seldom traveling far from their nest. Hippogriffs are frequently preyed upon by both dragons and wyverns.
A typical herd included one to three males, an equal number of mares and foals.

Hippogriffs are carnivorous and are extremely dangerous until tamed, which should only be attempted by a trainedprofessional. The diet of the Hippogriff consist mainly of insects, birds, and small mammals such as ferrets. They can sometimes paw at the ground for worms if no other food is readily available.

When breeding, Hippogriffs built nests on the ground, and laid only a single, fragile egg. The egg usually hatched in twenty-four hours. Infant Hippogriffs are capable of Flight within a week, but it take many months before they are strong enough to accompany their parents on long journeys.
Typically, hippogriffs breed in the spring and spent the summer months raising the youths. Domesticated winged mares sometimes are allowed to breed in the fall while raising their youths through the winter. By summer, the young hippogriffs are ready to be trained and ridden into combat. The off-season breeding is done with the use of boilers that heated the hippogriff aeries well through the cold seasons. When female hippogriffs prepare to lay eggs, they meticulously expand their nests of hay, twigs, feather-layered bottoms. When preparing to care for their young, females coo ancient hippogriff songs. They defend the nests as fiercely as they would the young.

"Now, firs' thing yeh gotta know abou' hippogriffs is, they're proud. Easily offended, hippogriffs are. Don't never insult one, 'cause it might be the last thing yeh do. Yeh always wait fer the hippogriff ter make the firs' move. It's polite, see? Yeh walk towards him, and yeh bow, an' yeh wait. If he bows back, yeh're allowed to touch him. If he doesn' bow, then get away from him sharpish, 'cause those talons hurt."
— Class about hippogriffs


When humanoid approach Hippogriffs, a proper etiquette must be maintained to avoid danger. Hippogriffs are intensely proud creatures, and an individual must show proper respect by bowing to them, and waiting for them to bow in return before approaching. Eye contact should be maintained at all times, without a single blink.
The Hippogriff should be allowed to make the first move, as that is polite. If offended, it might attack. Hippogriffs are tamable, but only by experts in their care. Although proud, Hippogriffs can also be fiercely loyal and protective of those who had earned their trust.

Hippogriffs are extremely territorial and will attack any intruders in their realm, defending their mate or young until death. They attack by diving and attacking with their claws and beak. Though regarded as clumsy attackers, flocks of hippogriffs can attack in concert. They can kill large prey such as bison, and are even capable of carrying it away in their talons.

Hippogriffs are ancient, magical beasts whose bodies resemble both horse and eagles. They patrol the skies above Toriel and viciously attack any enemies of the wilds that they encounter. Most hippogryphs are found in vast plains and grasslands.
The intelligent hippogriffs have given their allegiance to the fey of the summer court, who stands as protector of nature and all its creatures. The hippogryphs are wary of other races, but they're intelligent enough to recognize a friend of a friend. In the heat of battle, Elf Archers can call upon the mighty Hippogriffs to carry them into the air. The Archers mount the flying beasts and are capable of firing their arrows from the hippogriffs' backs. The brave creatures respond to riders as if they shared an empathic bond. Partially capable of understanding sentences, they also respond to code sounds. There is also an established code system of tapping the hippogryph's neck, as it is far easier to communicate through touch in driving winds. They appear to take pride in successfully navigating difficult conditions, and having the rider commend or acknowledge them for it. Indeed, their intelligence means that they stand a chance in flying such dangerous weather that no mere bird could withstand. 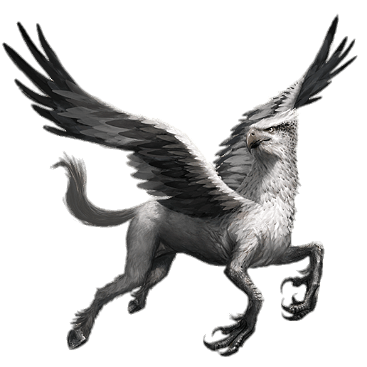