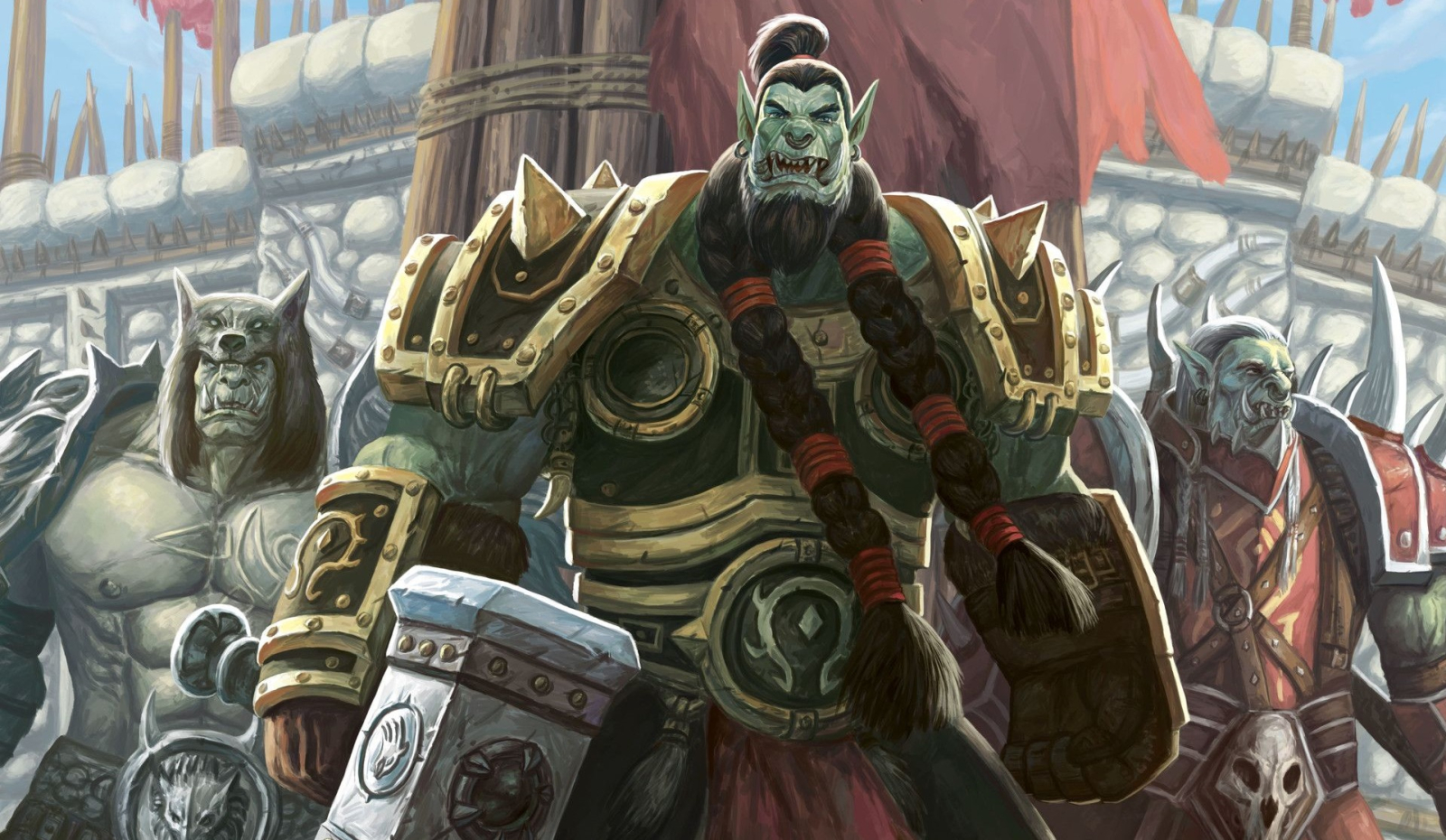 Honor bound and by glory crowned

Differing parts of the orcs presented here are (c) Wizards of the Coast and/or Activision Blizzard.
To their enemies, they are brutal and fearsome opponents, without parallel in their ferocity and cunning. To their allies, they are noble and honorable, following the traditions of a revered past. Though brutal in combat, orcs fight with a feral grace that equals even the finest fencing of an elven noble. For an orc, skill in battle brings great honor. The concept of personal honor that pervades all echelons of orcish society has made the race more cohesive and more of a threat to their adversaries.   For an orc, personal reputation is as important as his or her clan, and most will fight to the death in defense of either. While the orcs might seem quick to anger, they are tempered by the wisdom of their leaders and their shamans. While many of the other races perceive them to be brutish and savage, the orcs have forged a complex society that embraces many occupations and many different races.   There are five subspecies of orc: Bugbear⁣, Gith⁣, Goblin⁣, Hobgoblin⁣, and Mag'har.

In the same way that other species, such as Elves⁣ or Humans⁣, have genetic variations that affect skin color, hair color and texture, height, and so on, orcs have these genetic variations to the nth degree. That's why the mag'hari orcs are such a rare subspecies: orcs tend toward extremely of diversity and the mag'hari are the most 'average' looking orcs. Orcs with a hirsute bent are almost always full-on bugbears, smarter orcs are nearly all hobgoblins, orcs on the shorter side tend to be full-blown goblins, and so on.   Orc mothers gestate their young for around 6 months before giving birth. Orcish babies mature around the same rate as human babies do.

Orcs are omnivores, with a preference toward animal products both flesh and byproducts such as eggs and cheese. For plant-based foods orcs prefer starchy vegetables and legumes over leafy greens. Mostly this comes from a preference toward hardy crops that can grow in less than ideal soil.

Orcs live in constant wariness of the gods, whom they see as invincible, all-powerful, fickle children, and much of their behavior is rooted in that mentality. They believe that they can see the influence of the gods everywhere in the world around them, and the shamans of a tribe are entrusted with the responsibility of identifying these signs and omens — both good and bad — and deciding how the tribe should react to them. Some commonality exists in the written communication that all orcs employ and in the way that they use pigments to decorate and distinguish themselves and their settlements.   Orcish society has always been characterized by hardy and rugged living. As a result they are staunch pragmatists, and never shy from killing if it will protect the future of the orc or his or her clan. All orcs, regardless of gender or station, are expected to pull their own weight and weakness is considered a grave liability. The weakness of one contaminates the strength of all, and it is punishable by the greatest humiliation an orc can receive: exile.   Regardless of their clan affiliations, orcs prize honor over all other things in life — first to bring honor to their clan and secondly bringing honor to the self and to their sense of self-worth as an individual. Likewise, hospitality is considered one of the greatest honors that can be bestowed. There is no discrimination between genders in orcish society. Women are able to pursue the same career choices as men, rise to positions of power and are even expected to answer to the call for battle just as men are. Strength (both physical and mental), courage, initiative, and independence are prized traits in all orcs. Traditionally, children are seen as children of the parents, but are raised as children of the clan.

Orcs in general have a more sloping face than the other tribal descendants. This is only partly true though, in that they have a heavier brow line. However an illusion of a sloped face is created because of the orcish trait of a forward-set jaw. Some orcs have tusks of various sizes that stick up from their jaw, but this tends to be prevalent only in mag'hari and bugbears. Orc hair tends to be black or brown, and their iris colors are most commonly brown, black, blue, or green, though occasionally red eyes are known to occur. Orcs tend to have broad, flat noses.

Like humans, orcs can be found almost everywhere. This ubiquitous species has a habit of adapting the landscape they find themselves in to suit their needs, whether that means widening and securing natural caves, clearcutting forest, creating portable whalebone and fur yurts on the tundra steppes, or erecting mighty towers and walls on the banks of a river. Orcish settlements tend to have a more  'dirty' look to humans and elves than their own settlements, which stems from the orcish prioritization of function over form, rather than being any more or less sanitary than other species' communities.

The naming of an orc child is temporary until he has performed a rite of passage. Once an orc has brought honor to his name and the name of his clan, the elders of the clan give him a second name based upon his deed.   Orc children have names like Urzul and Baggi, while orcish adult names are more epithetical, such as Blackhand, Doomhammer, and Iron Tusk.

There's an orcish saying, "Chicks dig scars." Orcs are warriors at heart and often see scars as evidence of courage and tenacity, as well as honorable fighting (you don't get scars when stabbing someone in the back). This is true for both male and female orcs, each seeing battle scars as an attractive addition to another orc. Otherwise physical fitness, visible strength, and signs of health and vitality are all things orcs look for in mates.

If an orc wishes to enter a relationship with another, a courting hunt is arranged. In this hunt the two orcs will partake of a multi-day hunt together, often getting to know one another in the same manner a human pair would on a series of dates. This hunt is not simply a camping trip though. The orcs' shaman(s) set a goal of the hunt, which the pair must complete to show they are compatible warriors and their union is blessed by the gods. This goal might be to take down a particularly large predator, to bring back a certain number of beasts for the tribe's food stores, to defeat a nearby enemy force, or any number of other goals. Continuing a relationship after a failed hunt bring grave dishonor to those orcs and their families, and so is almost never done. If a pair fail a hunt, they can attempt a new hunt in a year and a day.

Orcish relationships are fiercely loyal to one another, and an insult to one is treated as an insult to both.

Orcs believe that any seemingly unimportant discovery or event — a bear’s claw marks on a tree, a flock of crows, or a sudden gust of wind — might be a communication from the gods. If the tribe has encountered a similar omen before, the shamans understand how to interpret it, but if a sign from the gods has no clear explanation, the shamans might have to meditate for hours or days to get a vision of its meaning.   Every group of orcs has particular superstitions and recognizes certain omens. These tenets vary from tribe to tribe, and are often based in events that the tribe has experienced. Here are a few examples:

The orcs are descendants from the ancient Neanderthal tribe of prehistory. Created in eons past by the mi-go as police and laborers, the neanderthals are the only tribe that managed to escape drastic alteration from another of the elder races or environmental hazards. Over time they evolved into modern orcs, and in that process they developed extreme genetic swings of variability independent of outside or environmental influence. There are as many gith and goblins in cold areas as there are bugbears despite bugbears being covered in coarse fur.

Orcs have strained relations with most other species due to their differences in culture. They are often met with guards and subjected to more scrutiny than any other species in common lands thanks to a stereotype of orcs as savage, bloodthirsty brutes. Which, in fairness, some orc tribes are. Because of the stigma of this sweeping generalization though, orcs tend to stay away from other species' settlements. 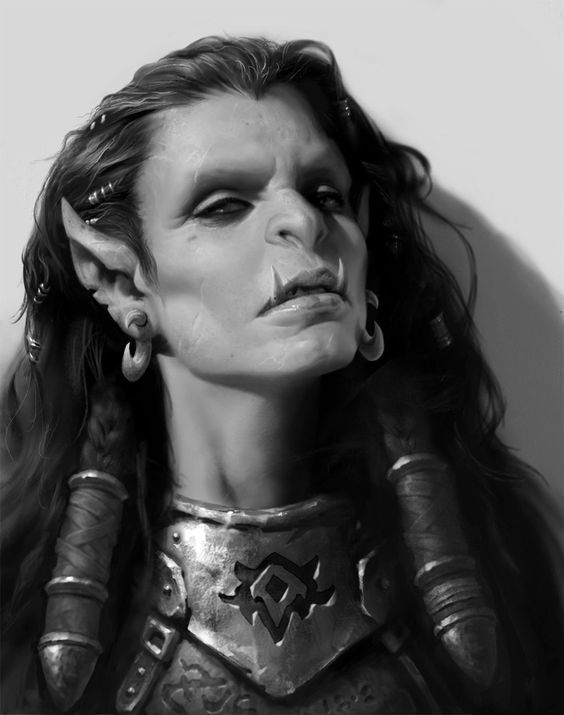 Genetic Ancestor(s)
Genetic Descendants
Scientific Name
Homo simplex
Lifespan
Orcs mature at the same rate as humans and have lifespans similar in length to theirs.
Average Height
6 to 7 feet
Average Weight
230 to 300 lbs.
Average Physique
Most orcs have broad shoulders and are naturally muscular. Males tend to be slightly hunched forward at the shoulders as well. Female orcs generally have wider hips and a larger bust compared to other species of their height, and while more slender than male orcs still possess a more robust frame than the females of other species.
Body Tint, Colouring and Marking
Orcs have skin in the reds, browns, tans, and greens spectrum, but each subspecies has a more defined, unique coloration.

Pacificstic hunters of mind flayers, the gith are an offshoot of the orc species that had been enslaved for hundreds of thousands of years.

Intense, rigid, code-following warriors for whom combat is the highest glory.

Consummate traders, goblins are a stain on the honor of the orc species... not that the goblins care one whit about that so long as they get paid.

A spiritual, nomadic orcish people that see themselves as caretakers of the wilds.

Human
Species (FoM)
Smallfolk
All copyrights belong to the original creators of the works both artistic and written featured herein. Credits given where possible.  Original works are copyright Michael Plowden.

Your orc character has the following racial traits.   Alignment. Orcs might not have an innate tendency toward evil, but as many end up there as end up good. Even though they are generally an honorable people, most orcs tend to favor personal freedom over statutory law, and therefore lean to chaos.   Darkvision. You can see in dim light within 60 feet of you as if it were bright light, and in darkness as if it were dim light. You can’t discern color in darkness, only shades of gray.   Menacing. You are trained in the Intimidation skill.   Powerful Build. You count as one size larger when determining your carrying capacity and the weight you can push, drag, or lift.   Orc Subspecies. Orcs have five subspecies: bugbear, gith, goblin, hobgoblin, and mag'har. Choose one of these subspecies.

Languages. You can speak, read, and write Common and Orc.