They accuse us of bringing the sport of DragonGoal into disrepute. I'd like to see them show us they're better than us.
— Captain Ledni Üüstrothe of the Ovük Shields, before the final

The Central DragonGoal League Grand Final of 38 Return was a DragonGoal match contested by the Ovük Shields and the Shixiiwul Divers, held at the Ovük DragonGoal Ground on the 24th of Structure, 38 Return. The match was narrowly won by Ovük, but marred by accusations of biased refereeing and off-field violence that involved players and spectators alike.

The Ovük Shields are one of the founding members of the CDGL, and hail from the "Home of DragonGoal".   They have been a dominant team for the majority of the league's existence, aside for notable dry-spells during the Era of Disturbance and early in the Era of Contact.

The Shixiiwul Divers are one of the youngest teams in the CDGL, being added to the league in 4 Return.   Coming from a rather poor country in the north-west, the Divers are historically one of the lowest-scoring teams, getting the wooden spoon 8 times in 10 years.
The two teams met twice a season, with nearly every match between them ending in a Shields victory. Over time, this led to a deep resentment being held by the Divers' very passionate fanbase, who would regularly accuse Shields fans and players of being elitist during matches.   This animosity reached its most intense during the 22 Return elimination final, which was the first one the Divers had ever made. In this final they were obliterated by the Shields, and the raucous jeers of the Shields fans resulted in multiple ticket holders being ejected from the stadium and statements needing to be issued by the Shields' captain and coach condemning their behaviour towards their opponents.
Conflict Type
Sports Event
Start Date
1:22pm, 24th of Structure, 38 Return
Ending Date
1:35pm, 24th of Structure, 38 Return
Conflict Result
Ovük Shields | 9-7 | Shixiiwul Divers
7 players were suspended for their role in a post-game brawl, 3 spectators fined

Heading into the 38 Return season, both teams were in the best form they had ever been in. During their early-season match, the home-team Divers managed to claim their very first win against the Shields, leading to days of celebration among fans. While they would then lose to the Shields on their home turf, they still ended the regular season in 4th place - their highest ranking to date.   The two teams met in the qualifying final, which was not especially close. The Shields easily defeated the Divers 12-5, relegating them to a long-fight through a semi final to have a chance of reaching the end.   However the Shields did not exit this match without loss, as their lead offensive player, Aiyürri "Danger" Ro Eogla, was injured in a collision with Divers' player Jii'a Ulquldash, resulting in both players needing to be taken from the safety nets to seek medical care. While both players and their dragons were ultimately fine and neither was found at fault for the mid-air strike, Danger's injuries ultimately resulted in her missing the rest of the finals series.   The Shields still swept their preliminary final without their star player, giving them their place in the grand final. The Divers were able to claw their way through a semi and preliminary final to reach their first ever grand final, hosted in the Ovük capital city of Wonasma. 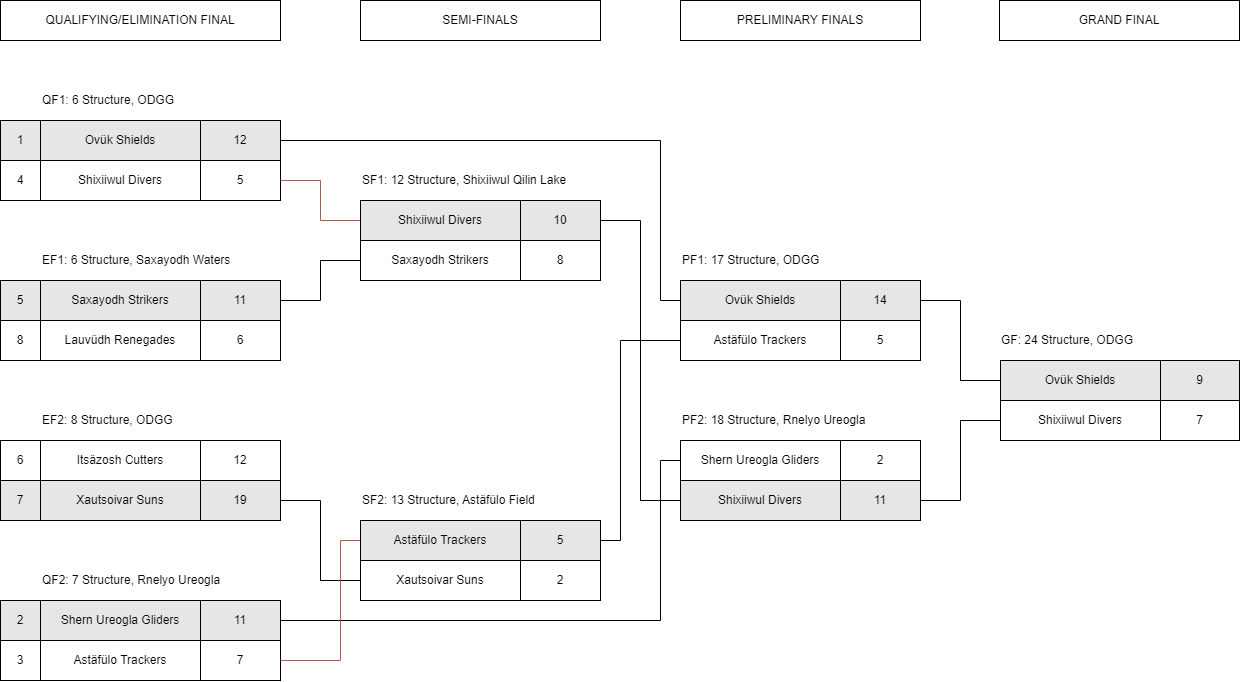 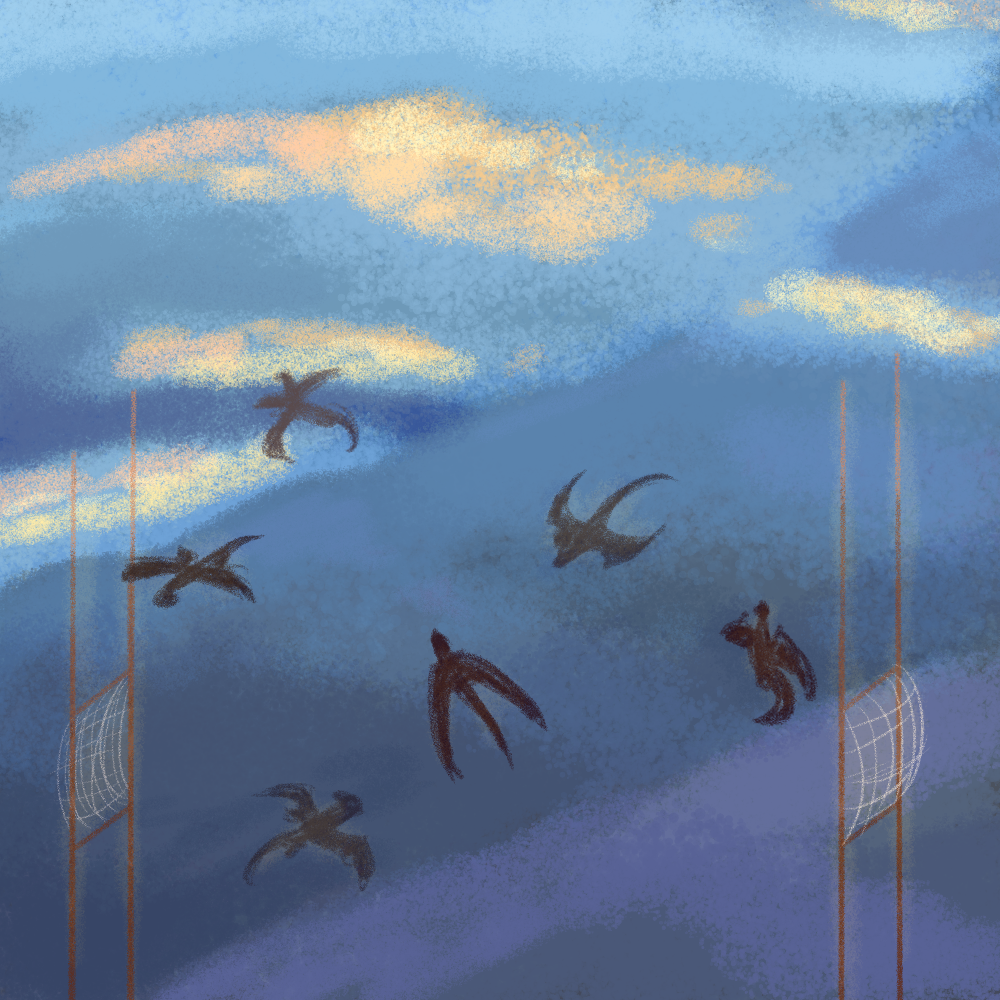 CDGL Grand Final 38 Return by Isaac Thompson
After a short performance of each teams' theme songs, the match began at 12:00 on the dot. The Divers found success in the first quarter, managing to score 3 points to the Shields' 1. In the eyes of most, the trouble began in the second quarter, when the Divers' swapped out defender Onejo Orinyithhol for Jii'a Ulquldash - the same player involved in the qualifying final collision with Danger Ro Eogla. Jeers from Shields' fans accompanied her ascent to the field, and she found herself unable to do much work due to consistent rulings of fouls against her during the 10 minute quarter, surrendering 4 goals and scoring only 2.   Orinyithhol returned to the field at the start of the 3rd quarter, remaining in the defensive role until the end of the game. However, the situation did not improve much for the Divers, losing another 3 goals and being unable to score any in return. Divers' fans became especially rowdy towards the end of this quarter when their offensive player, Ro Fyoshlu Ddyonn, was removed from the field after supposedly hurling abuse at a nearby umpire following a foul. An argument ensued among players and umpires, bringing play to a halt for several minutes.   The fourth quarter saw much of the same, with the Divers managing to score 2 further goals despite the loss of their best attacker, but failing to close the gap between them and the Shields, who scored 1 final goal to finish the game 9-7.

I reckon we were ruled out of that match from the very beginning. I'd fly a dozen metres away and be called on close contact, Ddyonn would pass the ball and be called on possession, we'd be on the other side of the damned field and be called on everything. If it weren't for those umpires, we'd have wiped them out of the sky.
— Jii'a Ulquldash to a reporter, 1:18pm

While the Shields' fans cheered loudly, Divers' fans sought to drown out their celebrations with booing. The two teams met underneath the safety net to shake hands and congratulate the other on a game well played, but a number of players were absent. Notably, this included Divers' captain Thyan Ulbwi, who went directly to the referees to lodge a number of complaints against their rulings and conduct during the match.   During the tense meeting, Ulquldash was asked by a local reporter about how she felt she had played. Her response was vicious, all but accusing the umpires of bias against the underdog team, refusing to "let their home-town darlings be smeared by a loss". These remarks were heard by a number of players and fans alike, but particularly Shields' player Ihaloi Do-älaing, who responded to the perceived slight by attacking Ulquldash.   This 'first punch' quickly sparked a brawl, with players from each side participating. When two brawlers, Shields' Ötsla Ünkünsha and Divers' Ara Rakhenu'o, drew close to the spectator stands, those nearby joined in, and the violence began to spread throughout the stadium. A Divers' fan, Qilinash Unthust, took it upon himself to attack a nearby referee attempting to break up the brawl, breaking the man's nose.   This stadium-encompassing brawl was finally brought to a halt by the arrival of a force of Ducal Guards, led by Duchess Chaila of Ovük. Two dozen people were ferried to nearby hospitals, while several dozen were held for questioning, with the remaining spectators being closely watched and escorted from the stadium.

Following the match, both teams were questioned by the CDGL about the incident, as were the handful of spectators held by the Ducal Guard. Following an intense investigation by both groups, the Shields' victory in the match was upheld, but 4 of its players were suspended for their role in the melee. 3 Divers players were also suspended, with all 7 being issued fines by the Ducal Guard. 3 spectators were also fined, but no jail sentences were given to any involved.   Notably absent from the list of those charged were Jii'a Ulquldash and Princess Jiind of Shixiiwul. Ulquldash was investigated and, while she was condemned for her "inflammatory remarks" which sparked the brawl, was found not to have actually attacked any during its course except in her own self-defence.   Jiind, on the other hand, was subject to only a brief investigation, and was never charged by the Ducal Guard. This was despite the fact that several bystanders reported that she had thrown punches in the stands, though some accounts disagreed. It is widely assumed she was not charged in order to avoid a diplomatic incident with the Kingdom of Shixiiwul, which she was attending the match on the behalf of.   The absence of many of these players in the three rounds of the 39 Return season that have been played to date has been felt very keenly, with the Ovük Shields and Shixiiwul Divers both losing all three matches. Shixiiwul in particular has been badly affected, as it has a comparatively smaller field of talent to work with. Both teams' fan bases remain incensed over the incident, and many are nervously anticipating when the two teams will clash again in the 6th round of the season.

It pains me to see our great sport smeared by this incident. Beyond the sanctions imposed on individual players and spectators today, there will be a broader investigation into how we can ensure the safety of all involved at all DragonGoal matches, whether here or abroad. I refuse to let another brawl occur.
— Duchess Chaila of Ovük, sponsor of the CDGL

Man, a sport played on the back of Dragons? That sounds freaking sick! I love it!   This is a very nicely written article, good job!