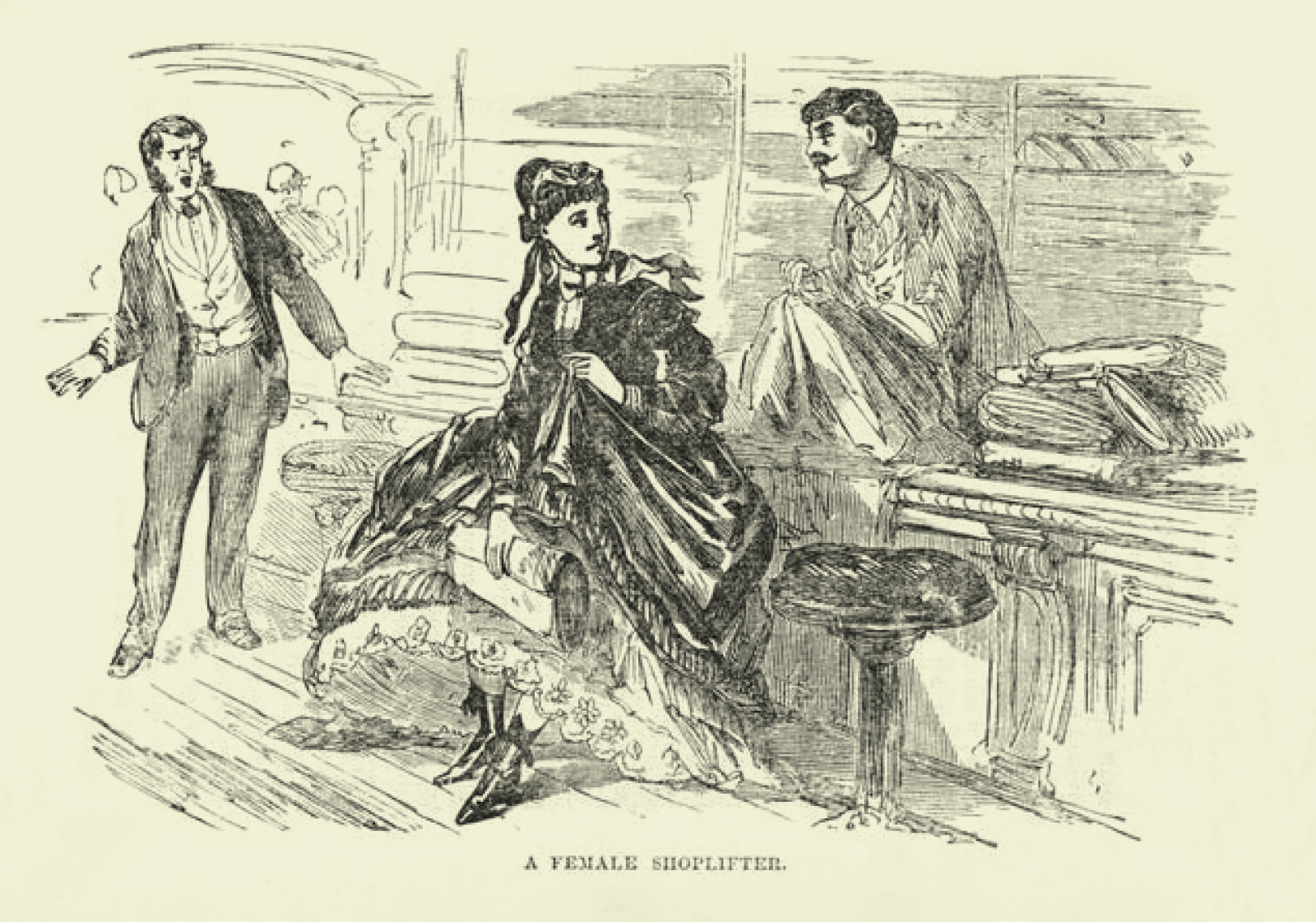 The Thirty-Nine Wolves are an all-female gang that formed in Sistu, and has been around for at least forty years. Their current name was inspired by the Thirty-Nine Thieves of Lidaidi, the first true organized street gang in Veshiri, although the Wolves have long outlived their namesakes.   The Wolves specialize in shoplifting and extortion, though they also dabble in a variety of other crimes. They are particularly noted for avoiding the scrutiny of the police - those few that have been caught have often been let off with little more than a slap on the wrist, and prison sentences rarely exceed three years, and are almost never of hard labor.

The shoplifters wear a variety of modified female garments that include hidden pockets. Coats, hats, corsets, cumberbunds, skirts, bloomers, muffs, parasols, and other articles can all serve as a place to squirrel away items both large and small. As the gang hit it big, the higher members began to invest in magically expanded pockets for their top shoplifters - a considerable expense even in the most cosmopolitan of Veshiri cities.   Female customers are often left in privacy by the store staff, to preserve their modesty, creating numerous opportunities for enterprising thieves. However, many stores, especially in the hardest hit areas, have started employing a cadre of female staff members and even security guards, requiring an increasing talent in sleight of hand from the Wolves' members.   The Wolves primarily target upscale stores, especially those selling jewelry and clothing - items that are often lightweight, easily hidden, and high-value. Stores in poorer neighborhoods are used only as practice by the young ladies and urchins looking to hone their skills before gaining acceptance into the Wolves.   While shoplifting remains the Wolves' primary source of income, they also have a variety of sidelines. They demand tribute from smaller gangs in the area. Members have been known to use false reference letters to pose as maids, and then ransack the houses of Sistu's wealthiest. A few have begun seducing marks into torrid affairs - and then blackmailing them with the threat of a reveal. Stores can buy expensive 'protection' guaranteeing no theft for a year (and guaranteeing a practical emptying of the shelves if refused).   Successful members can easily steal thousands of crowns worth of merchandise over a year, enough to pay their dues to the Wolves and still support a family in lavish style.   The gang has become increasingly territorial in recent years, even as they've expanded operations into more and more cities. Any shoplifters operating without a membership must pay a tithe, and risk beatings and kidnappings if they refuse.

While the first Wolves kept their earnings a careful secret, recent girls have started openly living more lavish styles, joining the high bohemian newly rich and socialites in throwing extravagant galas, frequenting upscale restaurants and clubs, hosting art shows, and touring the city and countryside in expensive automobiles and airships. One particularly successful Wolf founded her own music night club, the Calico Club.   Their leader lives in one of Sistu's most upscale neighborhoods, surrounding herself with the trappings of wealth she never enjoyed as an outlaw on the frontier - richly upholstered furniture, exotic magical appliances, famous paintings. Many of the other girls have started emulating her home as much as they can, at the least in the rooms others will see - the front and back parlors, the later of which is often repurposed as a space for planning raids or simply indulging in certain illegal habits.

Diamond Divea leads the gang, with the aid of three 'little sisters.' Her 'sisters' are outlaws she brought with her from her gunslinging days, and each heads a different regional branch of the gang.

The Wolves number at least seventy members in Sistu itself, with more in the outlying are. They are rapidly building up a store of wealth, mostly in the form of magical items and lavish homes. The girls have a number of police, security guards, store managers, and politicians in their pockets in Sistu itself, and they're looking to expand their network along with their operations.   The current leader has purchased or otherwise acquired a series of safe-houses for smugglers, girls on the lam, and recently successful thieves to lay low and sort their loot in. They've also added a number of automobiles to their repertoire, as smuggling or getaway vehicles, either owned by the gang itself or by enterprising individuals.   Divea has recently purchased a single airship and - unknown to all but her 'sisters' - a stake in the drug trade, as part of her desire for ever more notoriety.

They came into the public eye roughly forty years ago - sometime in the 3460s - and may have existed as much as a century earlier, albeit under a different name. They initially allied with the Wolf Street Gang, though when that gang went under they snatched up their territory.   Their original founder is unknown, though their current leader, Diamond Divea, has launched herself into the public limelight and is the subject of quite a number of penny dreadfuls, the wider public both fascinated and politely horrified by her outlandish and flamboyant attitude and her long list of crimes. Divea claims she uses the penal code as a source of inspiration, and has been broadening the scope of the Wolves' activities.
-   Cover image from the public domain.
Type
Illicit, Gang
Alternative Names
The crinoline crooks, as one lurid tabloid dubbed them
Demonym
Thirty-Niner, Wolf
Leader
Diamond Divea
Location
Sistu
Notable Members

The Wolves remained no more than the subject of the occasional hand-wringing tabloid until Divea hit the scene, making a big splash for her first job as part of the Wolves. She poised as a maid, by then a well-practiced con, gaining entry into the home of Lord Iqimo, where she proceeded to befriend the other houseworkers, delaying her final heist. In a short amount of time, she had successfully bribed or recruited her coworkers, who found the Lord iniquitous and frustrating at the mildest.   One night, while the Lord and his family were out partying, Divea made her move, working together with the others to strip the house bare of everything not nailed down. Reportedly, she came back with a hammer for everything else.   The heist made headlines throughout the city and the surrounding region, and wormed its way into newspapers around the globe - often as a minor curiosity, or as a condemnation of the immorality of the modern era. Divea rose rapidly in the ranks afterwards, until she became the head of the Wolves.

Divea is perhaps the single greatest reason the Thirty Nine Wolves have any fame at all. She has a keen mind for sensation, scheduling and arranging high profile jobs to keep her gang's name at a constant simmer in the pages of Sistu's newspapers, occasionally splashing outside what feels like an increasingly small pond. The constant coverage feeds her organization, bringing in new recruits and easing the way as they expand their territory - and provides a cover for more lucrative and secretive jobs.   No other gang enjoys quite as more notoriety, although that's in part due to most criminal masterminds' habits of staying under the radar. Divea, on the other hand, keeps articles about her and the Wolves framed, and has been known to write letters to the editor when she feels a report left out a key detail of one of her crimes. She is a staunch supporter of the free press, notably once arranging a protection detail for a journalist who had angered a rival gang, and she enjoys an amicable relationship with most newspaper bosses - after all, the Wolves' exploits always sell.
Sistu

I officially think these women are badasses. Great article and an excellent read. Keep up the good work!

I love them. I. LOVE. THEM! Great concept, great prose... It's beautiful AND gives me ideas for one of my own in the works. Well done!

A nice article conveying the tone of the world well; one question what's been their biggest most infamous job?

Thanks!   Hm... I want to say Divea's entrance into the limelight. She posed as a maid for some snotty noble who was Big in the city and related to the mayor at the time (not the current one), bribed or recruited the other maids, and then proceeded to steal everything not nailed down. Reportedly, she came back with a hammer for the rest. (that'll make a great sidebar thing, ty for the prompt!)