Oh great pearl of the valley,
You whose golden light gleams among the emeralds,
Beside the silver vein that flows
Into that broad pool in the garden of the gods.
The stars in their eternal envy,
Look down upon you and would only descend
To walk humbly in your gardens
Among the arches and columns of your majesty.
— Inscription in the reception hall

The Golden Palace was the delight of the Kodiri Empire, first built in the year 4,025 of the Dawn Era, two years after Queen Empress Kodir I founded the new dynasty. It was continually inhabited for the next two thousand, seven hundred and forty two years, until the fall of Kodiri and the ransack of the palace. Careful reconstruction efforts are currently underway, aiding by past-viewing magic from abroad, as an interest in ancient history has stirred in the hearts of Veshiri's people.

The palace was constructed at the urging of the high priest of Lidaidi, who had ruled until he conceded the city to Kodir. He had thrown his all behind the new queen, and felt strongly that she needed a palace to rule from, rather than the camps upon the open plain she preferred - as a status symbol, if nothing else. She recognized his knowledge of the peoples of the settled lands and listened, ordering the construction of a grand palace in a blend of styles between her peoples' preferences and the region's traditional architecture - though she refused to add fortress walls.   A later descendant would properly fortify the palace, bring it to three functions: a grand place for the royalty and their staff to work and live, a statement to impress any ambassadors or visitors, and a fortress against the ravages of the world.   The palace wasn't always the primary residence of the rulers of Kodiri, for a few built palaces elsewhere, often leaving a child or several in charge of the Golden Palace and therefore the ancient city of Lidaidi.

The palace complex was expanded numerous times over its long history, as each successive ruler (with a few exceptions) made their mark upon the golden halls. The various architects kept to the same exterior appearance and general layout, expanding the complex by adding more courtyards and buildings to ring them. The interior architectural details varied, but care was taken to keep them in harmony with the rest of the palace.   The first major renovation was under Kodir's granddaughter Rasir. Rasir made the Golden Palace her center of operations and permanent home, rather than a temporary stop as her grandmother and father had treated it. She transformed the original four buildings into a reception area open to the public, and added private quarters for the royal family along with a bureaucratic wing for the administration of the empire. The chambers of the great gathering, Kodiri's advisory council that Rasir expanded, were also built, making the Golden Palace the official seat of government. Rasir also began to assemble a library in a detached building, declaring that it, too, was open to the public - marking the world's first public library, and the beginning of using grand architecture for educational institutions.   Kodir's great-granddaughter Dalir oversaw the addition of fortress walls and other defenses, and took care to leave a massive field within the walls, plenty enough for the horses she had loved as a child.   A later descendant would add guest quarters to host not only ambassadors from far away lands but also travelers of note.

The architectural style is a blend of the traditional architecture of a region and the preferences of Kodir's people, who until the founding of Kodiri had been nomads. The fortress is built of layered bricks and stones, largely made out of a local yellow-toned clay holding together a granular aggregate, while the outer walls are of rammed earth. During its height, the walls were whitewashed and often glowed gold in the morning sun, giving the palace its name.   The building is designed to be light and airy, initially with clear views of the surrounding countryside from every room. As the palace has expanded past the point of that being possible, architects have still take care to include views of broad courtyards and carefully tended gardens.   Water flows through the palace, for Kodir enjoyed the sound of streams and marveled at the fountains she'd seen on her initial procession through Lidaidi. 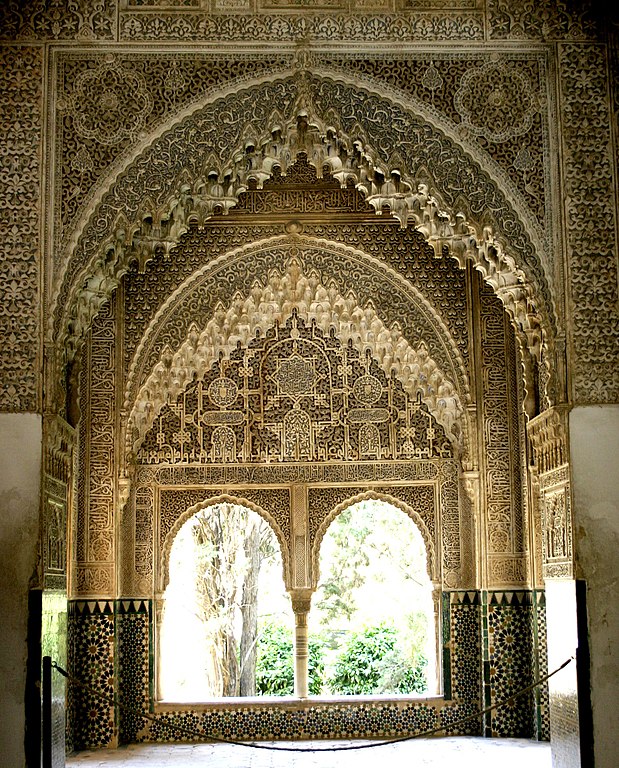 by Kiss Andras
The interior is decorated with intricate stucco work, tin-glazed ceramic tiles, and even carefully carved and layered wood. The primary motifs are calligraphic poems organized into geometric shapes, tessellations, floral and vegetal designs, and animals. The primary colors used were blue, red, white, and gold. Many of the interior arches were purely decorative, and no surface was left unadorned. Scalloped muqarnas decorate many of the interior vaulted ceilings, many with tiny scenes painted into them. Notably, all seventeen plane symmetry groups that are mathematically possible are represented somewhere in the palace through the medium of the painted ceramic tiles covering some of the lower portions of the walls.

The area enclosed by the walls covers an enormous one hundred and sixty acres, of which only a small portion is built up. The walls have four gates, oriented with the greatest overlooking the city of Lidaidi.   The great gate (named the Gate of the Sun) opens onto a wide courtyard flanked on either side by intricate gardens bearing roses and fruit trees. Well across from the gate is the grand entrance to the Hall of the Ambassadors, which contains the first reception hall and throne room of Kodir I. The Hall of the Ambassadors extends out past the rest of the palace, with open windows on three sides providing views of the gardens and countryside.   The throne sits opposite the entrance, in the center of the back wall, framed by an enormous decorative arch. Two grand doors into further parts of the palace flank the throne. The right (from the perspective of the entrance) feeds into the Hall of Flowers while the left feeds into the Hall of Stars. Each hall is heavily tiled, with the Hall of Flowers having a primarily floral motif, and the Hall of Stars being decorated with interlocking eight and sixteen pointed stars. Both halls lead into the Hall of the Verge, which separates the public portion of the palace from the more private portions, and which used to serve as the home of Kodir and her family when staying in Lidaidi.   Those four halls surround the Courtyard of the Horses, the largest internal courtyard in the palace. Intricate column arcades ring the courtyard, the centerpiece of which is an enormous fountain of stone horses, designed by Kodiri's greatest engineer of that age.   Other buildings of note are the Halls of the Birds, a cluster of the buildings surrounding three courtyards, used for administrative work and located in the right wing of the palace, each named for a different bird common to the area. The Halls of the Trees in the left wing house the royal family and their servants, and each courtyard contains a different type of fruit-bearing tree, some imported from quite a distance. To the rear of the palace are the royal stables, overlooking the horse pastures that rise into the mountains.   To the palace's right is an educational complex, consisting of the first public library and later a small school. To the palace's left is the chambers of the great gathering, where Kodiri's advisory council would gather from the reign of Queen Empress Rasir onwards.

The palace was ransacked and then utterly destroyed in 1,253 of the Dawn Era by the warlord Veshir, who would go on to found the Veshiri Empire that eventually came to cover the world. The palace remained a ruined crown upon the mountain overlooking the capital city of Lidaidi for millennia, until three hundred years ago a new fad for historical nostalgia rose in the people's hearts. The political bite of Veshiri versus Kodiri had long since faded, and excruciatingly careful restoration work began. Parts of the palace are now opened to the public, proving a tremendously popular tourist attraction.
RUINED STRUCTURE
1253 of the Dawn Era
Type
Palace
Parent Location
Lidaidi
Owner
Queen Maiqa
Owning Organization
Kodiri Empire
Inscriptions
The Crown of the Mountain
Kodiri Empire
Lidaidi
Lidaidi

Aw, I'm sad this is a ruin! It sounds stunning. The architectural detail you've put into this is wonderful - do you study art or architecture at all? Also, on-topic question! What are the chances it'll be able to be properly restored? Does it have enough modern-day reference material to be truly recreated?

Thanks! I took a bunch of art/architecture history classes, yeah, especially on south asian and islamic architecture.   Restoration's very slow - the biggest problem is actually lack of *artisans* trained in the old crafts (there's a few but they're not numerous) - but it's definitely on track for completion eventually. Fortunately, the building was the subject of numerous works of art and writings, and a few people with past-viewing have gotten really into finding out every detail of it. 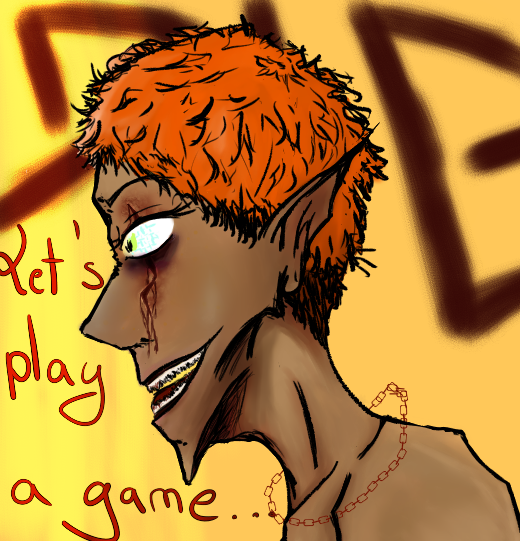 Noooooo why is it a ruin now?! :C It sounds so beautiful! There was so much details and care put into its construction, and so much history behind those walls! Well at least now it's getting restored, but still, what an awful thing to do... The images you've used made me think of the Alhambra in the Spanish town Granada. This castle definitively seems like a one of a kind landmark, one that you need to see at least once in your life.

Thanks! And yeah, studying ruined buildings was always the saddest part of art history! So many great works completely lost. The images are from the Alhambra; this complex doesn't look *quite* like that, the original building especially has a lot more in common with various examples of mongolian architecture in my head, but it's relatively close

Wonderful attention to detail. Interesting that it is an tourist attracted: did it ever have to fend of scavengers or people looking for good stone?

Thanks! And probably, that was a really common peril for buildings/ruins before people got into preservation, though I think the Veshiri emperors tended to have it left alone so it'd be a monument to the power of what they can overthrow