The world of Thorns can be the foundation of many types of stories. Some might be told around a campfire as you wonder if the branches nearby are reaching for you. Others might be read in the comfort of one's bed while listening to the creaking sound of floorboards that shouldn't be moving. But like with many things, stories are best told together. That is what a roleplaying game is about. You take on one role with each of the other players taking on one of their own. One person will act as the game master (GM), in charge of guiding the rest of the world and help you build a story.

How to feel better as a player.

How to be a reasonably Good GM

Anatomy of a Character

In order to understand the strengths and weaknesses of a character within the game, there are numbers and descriptors for their various abilities. These come in five different varieties: Core, Skill, Vine, Ritual, and Talent.

Core abilities are the ones everyone has to some extent or another. They are the foundation to all other things that you attempt to do, representing pure talents rather than specific training. There are six of these, as follows.

When you practice a specific task, that is increasing your skill level. Sometimes the rules will refer to a skill by name for a value, in which case means the levels you have in the skill alone. Sometimes the rules call for a value described as a core with skill within parenthesis, in which case you add those together. Each skill is associated with the core ability it is most commonly used with, but it is theoretically possible to add the skill levels to a different core for a specific roll. For more on their uses, check out the skills chapter.

There are special abilities beyond those of normal humans that can be acquired. Sometimes they're as much a curse as they are a blessing as they change what you are. Too many vines wrapped around your soul might take away what you were entirely. And some grow in completely transforming ways, such as those turning you into a werewolf. A lot more is said about these in the Vines chapter.

One doesn't have to be well versed in any Arcana to still benefor from some rituals or methods. A simple ward of protection might be helpful, for instance. Some rituals are highly specialised while others have a more general purpose. A lot more is said in the arcane rituals chapter.

While the other abilities a character has given a good foundation for who they are. But people don't fall into the categories that skills and more form. These specific specialties are known as Talents and are described in the Talents chapter.

Dice and other tools 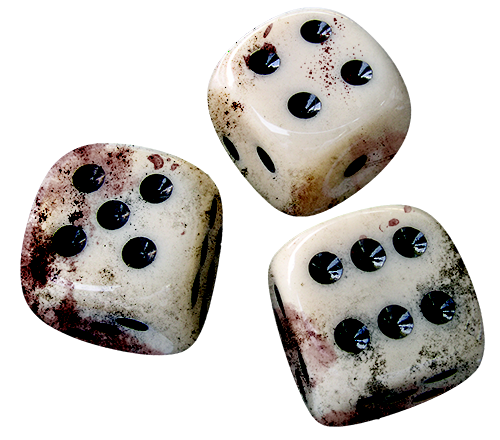 When telling a story together, sometimes the result of an action is unclear. The various abilities of a character indicate how likely they are to succeed at something. After describing what a character tries to do and how, their player rolls three regular six-sided dice (sometimes referred to as 3d6). To this, add the Core ability that's the most relevant as well as an applicable skill if there is one. The GM determines how hard it is to accomplish the task and sets a difficulty. Some examples of what that might mean can be found in the sidebar. What happens depends on how you rolled compared to that difficulty.   A roll of 3 before applying any modifiers (meaning rolling a 1 on all three dice) means a critical failure, representing that for some reason fate was not on your side. A critical failure might not just result in not achieving one's goals but also more severe effects. In a similar way, rolling 18 (a 6 on all three dice) is a critical success. Fates smiled upon you and everything went better than you would have expected. Any roll that is more than 10 below the difficulty is always considered a critical failure, and any roll that is more than 10 above the difficulty is always a critical success.

Sometimes situations are helpful. Darkness might make it easier to hide and access to a good library makes it easier to research. It is also possible to create advantages for later. For example, properly reading up on Infernals will make it easier to convince them of something. Collectively, this is known as Advantage.   Each source of Advantage can give a bonus between +1 and +4 to the roll, depending on how useful it is. The highest bonuses should be reserved for truly extraordinarily helpful things and require a complete success on any roll to achieve them. Even if the plan is otherwise sound. No amount of Advantage can give more than a +8 bonus in total.

Just like circumstances can make it easier, they can also be a hindrance. Each such issue should increase the Difficulty by +1 to +4, depending on how serious it is, for a total of max +8 in total from all sources. Anything beyond that should just be considered impossible. If using the normal Difficulty system makes more sense than adding these modifiers, so that instead.

Sometimes the difficulty of a roll isn't determined by surroundings but rather on the abilities of someone else. There are two types of oppositions that might interfere with success. A quick opposed roll is just trying to overcome a single skill of an opponent. An example would be Dexterity (Stealth) to sneak past someone. The difficulty of the roll in these cases is equal to 8 + the most relevant Core of the opponent + the most relevant Skill of the opponent. For instance, the attempt to be stealthy would be rolled against 8 + Awareness (Notice).   The second kind of opposed roll is known as a Challange. These are more complex situations where two or more sides are trying to achieve different goals. An example would be someone trying to complete an arcane ritual while others are attempting to disrupt it. Start by dividing the different sides. Each side declares what the first action they would like to take. The GM should let the least complex actions happen first. Members of a side are able to provide aid to someone who rolls for an appropriate skill. The difficulties for these are as per usual. Every side who gained partial success gets 1 point. If there are more than two sides and only one succeeded, they gain an additional point. The side who first reach 4 points and has more points than anyone else reaches their goal.   It is possible to consider the environment one side in a Challenge. For instance, if two groups are trying to be the first to reach an abandoned temple in the jungle, nature itself is a side controlled by the gm whose goal it is to defeat both teams.
Detailed chapters
Character Creation
Skills
Vines
Arcane rituals
Talents
General principles


Difficulty levels
When rolling dice, you are trying to roll at least equal to a difficulty. This is a guide to help the GM set an appropriate level.