Vecna is the God of the undead and necromancy.

Like all of the other gods, Vecna's will had not been seen on Theria for hundreds of years but recently (allegedly), he made contact with a group of adventurers in a cave in the Blistering Peaks.

The tale tells of a cave, the former home of a red dragon where a large table and chair set now sit, abandoned.
Rumors swirl around the meeting and its purpose which may never be known.

Vecna is frequently depicted with a dark cloak, sickle and glowing red eyes.

If he were to appear to a mortal, it would be well dressed with a flowing cape, top hat and higher class clothing. He speaks with a well mannered style and in a generally respectful tone.

In the older world, Vecna was often depicted as half human, half skeletal undead split directly down the center of his body. The right half, depicted as a beautiful male figure with long hair and striking features while the left was stripped of flesh. More modern art shows more of a mix of the two, somewhere between life and death but the image is always of a very attractive male figure. 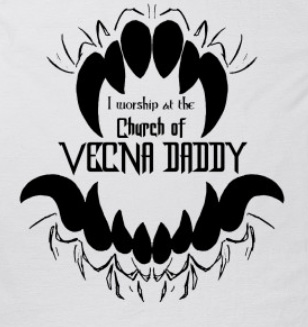