An ode to Biggun

“…charging toward the road, a short distance in front of you, a large creature walking on four stocky legs clears the brush line. Its huge head and two massive arced tusks nearly scrape the ground as it swings its head to survey the party, its large trunk searching the air for clues…”

A mammoth is one of the larger mammals found on Theria. Originally native to Athias, mammoths have been hunted to near extinction. Adult mammoths stand 12-13 feet tall at the shoulder and weigh roughly 16-18,000lbs. Both males and females have tusks that protrude from either side of their elongated snout, or trunk, and gently arc upward and outward, sometimes reaching lengths of four or more feet. Their trunk is the most recognizable feature, which at full maturity is 5-6 feet in length and is remarkably agile. While they are able to breathe and smell through their trunk, it also is used to grasp items like food or branches and trees.

Mammoths are tremendously strong animals and can be saddled with a carriage for riders or harness for dragging very heavy objects. While their natural movement is lumbering and rather slow, they are capable of frightening bursts of speed when incited to charge a threat! Historically they are grazing animals that travel in small families, with an elder female leading the group. Bull mammoths, typically lead a solitary existence only joining up with a group briefly for procreation.

Despite their size, mammoths are very responsive to persons they create a bond with, regardless of race. Mammoth experience complex emotions and are sensitive to the emotions in their handlers and members of their family group. Sounds of distress will bring a mammoth charging forward to investigate, which has been used as a means to trap mammoths for ages.

At least one mammoth was known to be imported to Overwatch before the great war. Its purpose is still the subject of speculation, but it was last known to be making its way back home to Athias with its Gnomish handlers, Phyllis and Ventra. 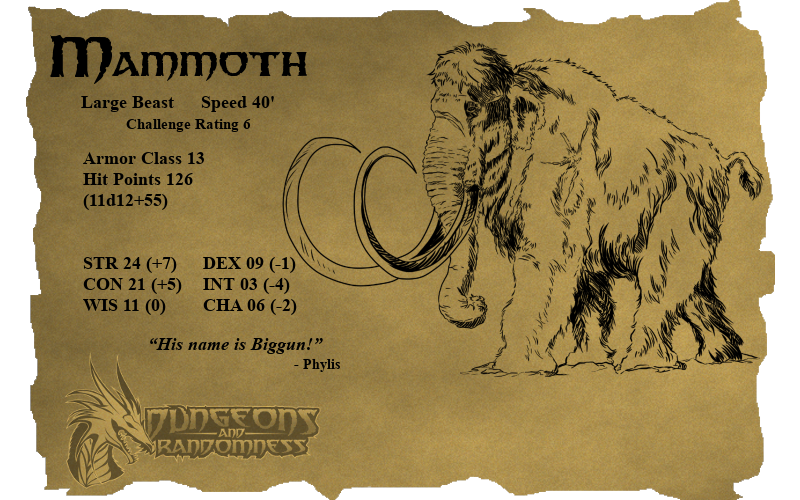 by Jamieson Alcorn
Living in Theria