While often overlooked, the simple door has been the turning point in countless adventures. What is the first lock a burglar picks? A door. How does the barbarian enter the room? Smashing through the door. What keeps the bandits at bay while a mother hides with her newborn in a back room? A locked door.

The nature of the door itself speaks volumes about who requested it, and what it was built for. The secret doors that Emon Thermack commissioned in House Darksbane may have little in common with the front door of The Honest Harlot, but the basic purpose was the same.

Dwarven craftsmen specialize in crafting stone doors which weigh hundreds of pounds but hinge and slide on such well-polished hardware that with a little oil every few decades they can be swung open and closed with one hand by even a youngling. Although well known for their blacksmithing skills, doors are a source of pride for the dwarven stonemasons who see the highest accomplishment in perfect fit and finish without an ounce of metalwork. The finest doors in Stonesunder have no hinges at all, but pivot with a ball and socket system recessed into the doorframe itself.

Doors come in various shapes and sizes, but most doors on the Therian mainland are made of hardwood and strapped with iron hinges and hasps. Common doors do not have a lock mechanism built in to them, but may have rigging to drop a horizontal bar in place for security.

Gnomes and Halflings are not known for their doors, but rather the intricate locking mechanisms which they both favor. Many gnomes in particular have been awarded their Mastersmith status by designing, building, and presenting an intricate padlock for review by the Guild’s board of trustees.

Doors have a unique place of importance in the culture of Theria. Among the many hamlets of Heroes March, it customary for a door to be part of a bride’s dowry. This symbolizes the father turning over the responsibility of protecting his daughter to her new husband, and is often decorated (if somewhat crudely) with carvings representative of the joining families. These carvings are often not on the outside of the door, but serve as the first decoration in a new home. It is not unheard of to see residences for sale with the expectation that the buyer would bring/buy their own door. However, as this practice is primarily rural in nature, it has surprised many a city dweller seeking to get a new start in farming.

Lastly, we have secret doors. Secret doors can take many different forms, from a false bookcase to a cleverly hidden cave entrance or a well disguised crawlspace under the floor. Not necessarily magical in nature, secret and hidden doors are not just the thing of children’s fantasy. Many an adventurer has spent his last living moments in a room full of shocked enemies as he desperately looks for the secret lever to re-open the passage that he just fell through. 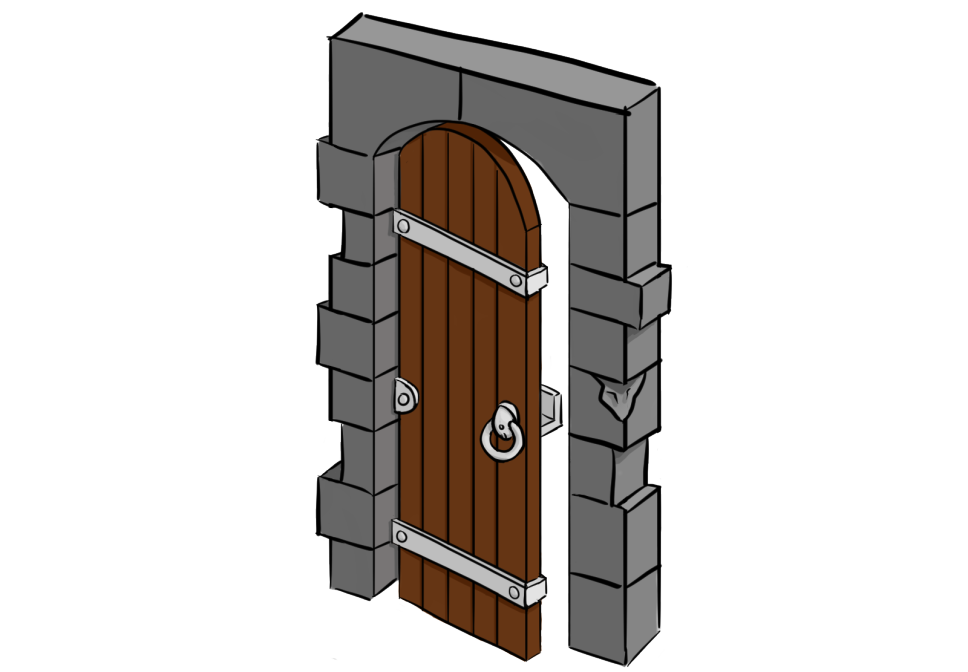