A Lifetime of Pain

Briahna Ebelmare was born to parents Martin and Vallerie , with two older twin sisters Katey and Silvia in what could barely be called a logging camp.

Not long after Briahna was born, Vallerie took Katie and Sil and moved to Whitehedge leaving Martin to fend for himself and the small child. Martin did what he could but Briahna's impetuous attitude often got her into trouble.

Sometime after her 8th birthday, Briahna began to have nightmares filled with demons, dragons and other horrors. Unbeknownst to her, she had been targeted by a witch who lived in the swamp because of a latent power she believed the child held.

One day while exploring, Briahna became lost in the swamp but luckily was found and rescued by a group of adventurers on their way to see the witch. The Witch attempted to bargain for the young girl but the group refused, particularly one Malchus Grimnas. Malchus and Briahna quickly bonded and she was soon returned to her father. They would meet several more times but Malchus and his group disappeared for nearly two decades after leaving to search for a lost tomb in the Northlands.

Briahna and Martin eventually moved from the camp to Winterhaven when the city of Overdale/Overwatch began expanding it's borders and forcing people to choose which side of the line to live on. Years passed in Winterhaven as Briahna's nightmares continued. Briahna grew close to Lord Padraig's Talia over time.

Eventually, the time came that the city had been preparing for for years, an attack by Overwatch. The attackers, both human and warforged assaulted the fort town in what would come to be known as LiT - The Siege of Winterhaven. As the attackers were repelled, Briahna witnessed Ian Serverus cut down Lord Padraig in an alley, and her father just after. No witnesses were meant to live to question Ian's ascent to the Lordship of the city.

Less than a day later, Ian would threaten Briahna and burn part of her face with a torch to keep her silent. That night she left Winterhaven for good. She was taken in by some folks in the Evergreen who had been hiding out in a cave. She learned that they were a rebel group called the White Ravens. She quickly befriended Liara Bryos, a former monster hunter and second in command of the Ravens. Over time, and with the death of Trias Draverson, the founder, Brie eventually took over the leadership role with Liara by her side.

This life of hit and run attacks against the still expanding Overwatch troops continued for years, wearing heavily on the young woman's mind. One day, Liara would return to the cave with a surprise: Malchus and his group had returned, 17 years after they had left. After catching up, and some potential violence, Malchus learned the fate of the land he had missed for decades along with another secret; Briahna had developed psionic powers, fueled by her hatred and anger.

When Malchus and his group returned, they agreed to help gather an army from around the continent to help defeat the Overwatch. While they were off on that mission, Briahna managed to get captured by a new squad from the Overwatch, The Crimson Shield. They took her back to their city to interrogate her, which they did but eventually the group divided and two members helped Briahna escape. Less than a week later, the group again found themselves in front of Ms Ebelmare and the White Ravens. Most of the Crimson Shield fled, but one Una Anhelada was trapped under her horse and retaken. She was to duel Briahna to the death as punishment. Perhaps Kord truly was on her side that night as Briahna, who should have been able to destroy Una, missed a shot that should have ended the fight completely.

Instead, Una and Brie became almost inseparable. Una, and two of her friends officially joined the White Ravens and began helping the cause. Now, with actual allies and friends, the war effort was becoming a reality. Malchus and his friends had amassed a large multiracial army and Una and her companions turned out to be quite useful as well. When the time came to defend Winterhaven from the Overwatch this time, they actually had a chance to win. The waves of the battle surged and the defenders were doing well until a shock event took place that no one expected. Malchus, who had been given a device and used it, managed to destroy most of the attacking warforged army in one swoop.

It was after this that the assembled group decided to gather and confront Ian about his cowardice on the battlefield. As the discussion got heated, Ian lashed out and stabbed his wife Talia, killing her and setting the rest of the group on him. He was holding his own and before the party could take him down, he pulled Briahna in front of himself to block a charging minotaur. Brie was killed in the attack and Ian was killed moments later.

Now, this may be the end of the story, but as mentioned previously, Una had become close with Brie and decided she could not leave her dead. They packed up the corpse and made haste to Esterholt where Una's temple and potential help resided.

Arriving in Esterholt after many delays, Una, Liara and Fie agree to fight the Angel of Death to give Una the ability to bring people back from the dead. Una was a paladin of Kord after all. They almost perished during the ordeal but eventually overcame the Angel, allowing Una to resurrect Briahna. The ritual was performed and Briahna rejoined the land of the living.

After spending a few days in Esterholt resting from the ordeal, an ancient red dragon landed near the city to get a moment of respite. Straad had been summoned to attack Overwatch in the battle raging there and had taken extensive damage. Deciding that glory was imminent, Una and her mentor from the temple Craig Mason gathered all of the available paladins, joined by Brie and rode after Straad as he flew south.

Arriving at the now completely abandoned city of Odysia the dragon was spotted and attacked. One by one, the paladins fell. Even Craig was assumed dead after being knocked over a cliff. Una squared off with Straad and told Briahna to run, which she did but only briefly. She couldn't leave her best friend and romantic interest alone with the dragon. Una too eventually was worn down by the giant beast and lay unconscious in the city square. Briahna, with no healing ability and barely the strength to drag Una to a safer spot finally got her clear of the dragon's view.   When Una took her last breath, Briahna stomped off after the dragon, the air crackling around her and the ground cracking under her feet. 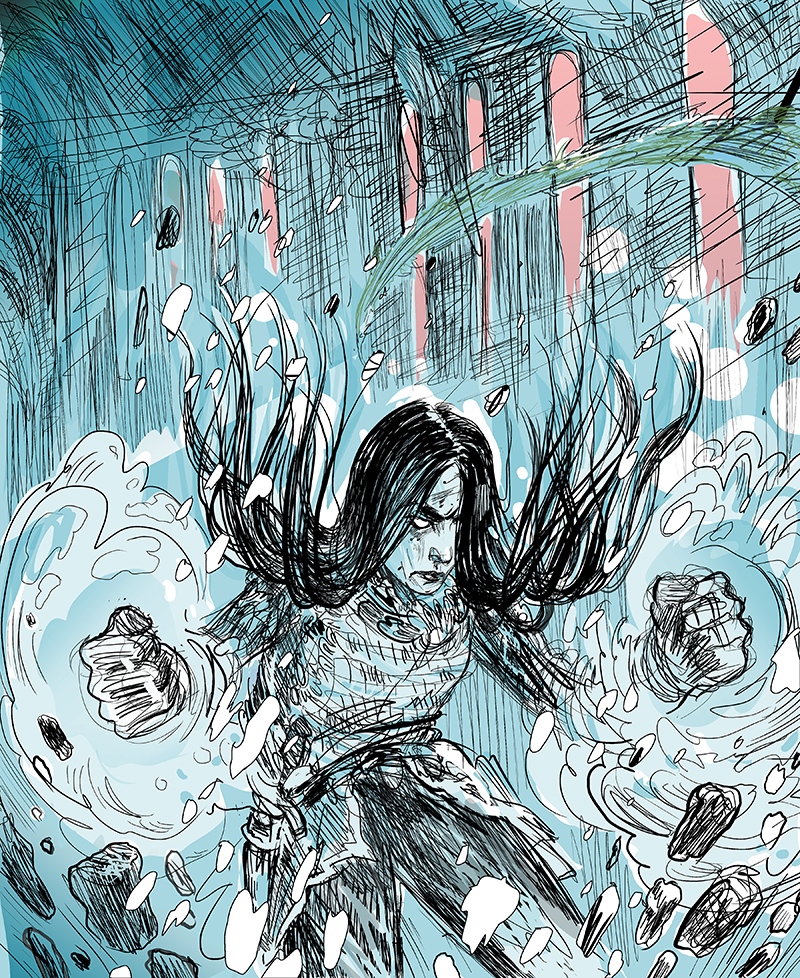 
Within moments, the dragon was fighting or it's life and snapped Briahna into his mouth, not knowing the psionic powers she wielded. As the lower part of his face exploded, the city of Odysia became eerily quiet.

Briahna was eventually rescued from being trapped under the dragon and took Una's body back to Esterholt and under threat of death, forced Julie Fairway to perform a resurrection on her. Una would come back and the two spent some time sorting out their relationship.

The world keeps spinning though, and as the leader of the White Ravens, duty always calls. After a new team of Ravens was sent to investigate some missing Ravens in the town of Lochfort , Briahna again found herself rushing to rescue people under her charge. Werewolves had assaulted the town, killing nearly everyone within and trapping the team. By the time Briahna and her group arrived, several of the Ravens were dead but the werewolves were driven out for the time being.

When the survivors had rested, they all gathered and with Brie's help, they tracked down the Alpha wolf (formerly Haven Tash) and the pack and engaged them. Briahna was savagely bitten several times in the fight, most likely condemning her to a life as a lycanthrope in addition to her normal problems.

She tried to go into hiding as the situation grew more dire but was discovered at House Dragonkeep by an old friend Marrek Aethelred and his group. He convinced her to accompany them on their journey to The Great Seal in the north on Ki'an, which allegedly held both the imprisoned gods of the pantheon and the realm of demons at bay. This trip would reunite Briahna with Una and solidify their relationship. Opposing forces and even internal group struggles fought to either release the gods or the demons, or just do nothing and leave everything as it was. To take action though, a psion would need to be sacrificed as only their power could unlock the seal, destroying their body and soul in the process. Three psions were present: Briahna, Daegon Arcanscape and Thantos. Thantos had loudly voiced her opinion that she would not die for this cause, but Daegon stepped up, said his goodbye's to his friends and was prepared to open the seal when Briahna asked him to step aside.   She said her farewell's and with Una standing right behind her, unleashed all of her power on the seal, freeing the trapped gods of Theria and herself being consumed in a column of light in the process.   Briahna's legacy lives on in Theria. The word of her sacrifice spread by her friends who were present at the Seal that day. The world in general may never know or understand the sacrifice she made but their lives are better for it.   **The story in it's entirely can be found in (Arc 1) Episodes 5-200 of the Dungeons and Randomness podcast where ever you choose to listen.