Getting Started in Winterhaven

A small group of adventurers, consisting Jarahk Ironhide, Malchus Grimnas, Thoril Songsteal, Trias Draverson and Duncan Joybottom, were going from town to town in western Theria, doing small jobs for those that needed them done. Their first big quest was given to them by an elderly geographer, Parl Cranewing. Parl wanted the group to chart a keep near Winterhaven.

While on their way to the keep, the group was ambushed by a group of Kobolds. The attacking force was quickly vanquished, but upon further inspection of the bodies, it was discovered that one of the Kobolds had an armband being the symbol of Orcus. The group keeps the armband and continues to Winterhaven. On entering the town, the group soon learns that the town is troubled; the mayor’s daughter had been kidnapped! The group goes to the mayor, Lord Padraig, who quickly hires the group to investigate where his daughter, Talia, went and sent them in the direction of some caves outside of town. On the way to the caves, the group discovers another ambush of Kobolds and swiftly eliminates the enemies. Finally, after a long day of tracking, the group comes upon the lair of the Kobolds. There, before the group engages the kobolds standing guard outside, Thoril manages to befriend one of the drakes, which then fights alongside him. After defeating the guards, the group enters the bunker to find Talia Padraig trapped in a cage at the mercy of a goblin named Irontooth, the leader of the band of kobolds. After slaying all enemies, the group rescues Talia, who reveals that she was to be used in a ritual to summon Orcus and that all of this was being orchestrated by a blood-mage named Kalorel. 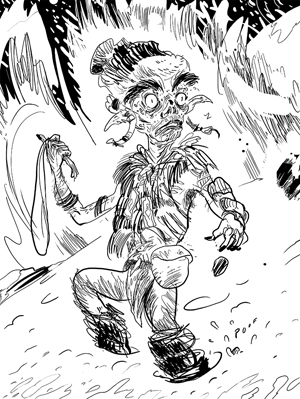 After successfully saving Talia, the group confronts and defeats Kalorel and return to Winterhaven. A ceremony is held and while being knighted by Lord Padraig, Thoril's drake jumps in to "protect" him and while Malchus, Duncan and Ironhide had been knighted, Thoril and Trias were forced to leave town quickly having not been given that honor.

Some popular phrases like "almost a crit" or "+1 for being speedy" are not listed as "first time..." for this episode due to the ending being recorded long after the actual first uses. They will be correctly listed in later episodes.