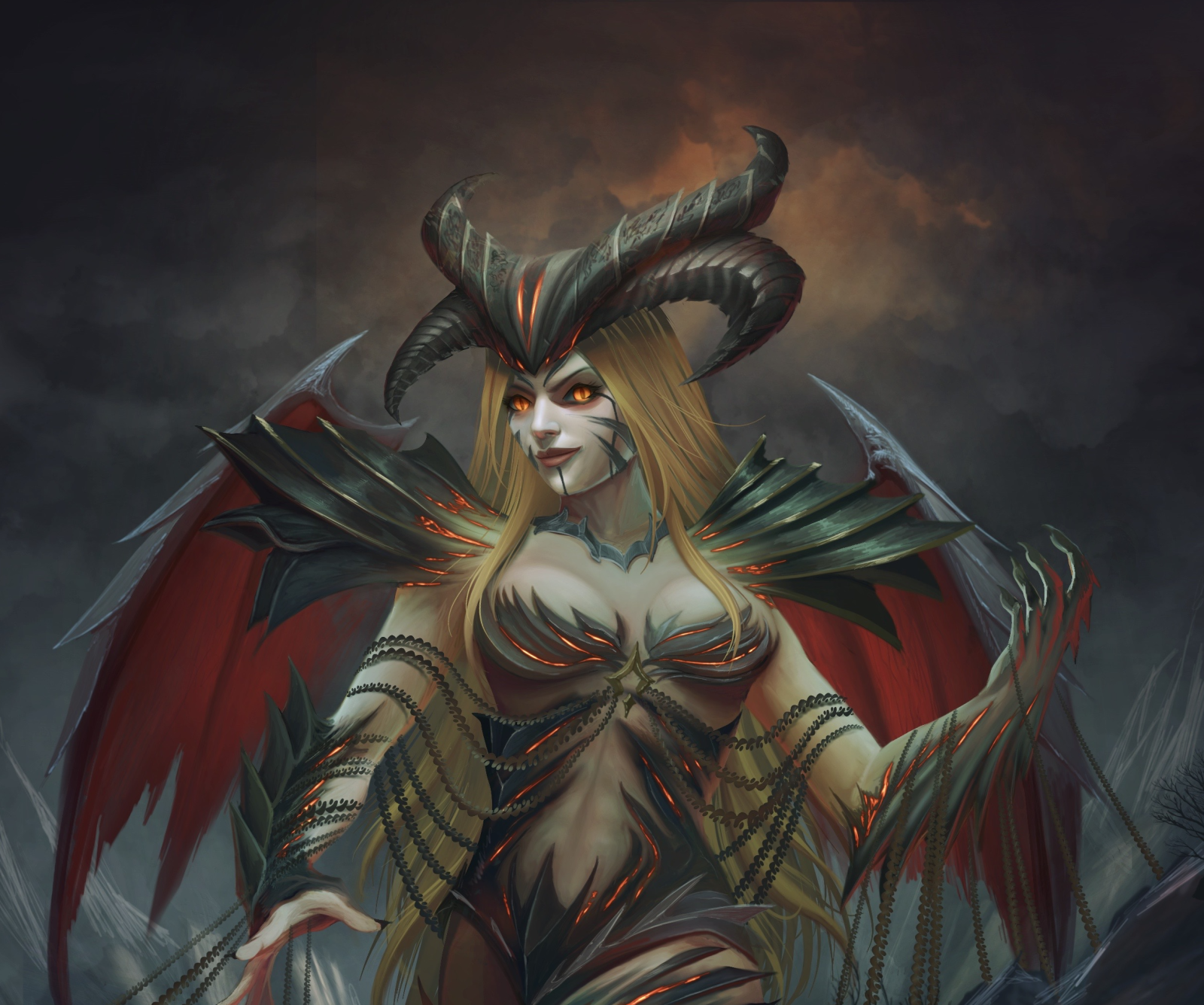 R'Ouhzaya, The Queen of Torture

"She watches everything you do, the mistakes you make, the people you let down, searching for 'any' excuse to pull you into her realm..."

The goddess of torment, known to the denizens of Eyre as the Painbringer, R'ouhzaya is a twisted demoness locked away in the Plane of Grithis, a realm of pure punishment and agony. R’Ouhzaya fills her time torturing the poor souls of Eyre who commit hedonistic crimes, devouring every inch of their greed, lust and hatred. Though knowing she can never leave, R’Ouhzaya is all but unhappy. When fresh blood arrives from the Shadow Moor to her plane of cruelty, they are swiftly met with the bleeding hellscape that is Grithis. Sculptures composed of flesh and bone dot the vile skin colored lands, serving as sickening constructs that litter the plane. These eerie towers form a forest of misery, composed of R’Ouhzaya’s less fortunate victims that had been contorted and conformed into macabre works of ‘art’. Though pain is thought to be R'Ouhzaya's main passion, some say it was the betrayal of Tog' Drakon, the lord of Power that had attracted her bloodlust. Forming a contract with the vile lord to twist to the souls of captured angels to suit her tastes, R'Ouhzaya created the first succubi, beautiful servants of pain and pleasure. These servants would prey upon the weaknesses of a mortals heart, only to steal their essence for their ruthless queen. Legends say that R'ouhzaya herself used to be an angel of Lyr, the goddess of Love and pillar of Pink light, were it not for Urthugax's domination over her mind that gave her the hunger for ecstasy in the woe she now deals to the mortals of Eyre.

"...T-They come at night, wandering the empty city streets. You can hear them shriek as they come upon you, they ALWAYS shriek, that's when you know they found something..." -Cibern City Resident


The night of the Shriving is when R’Ouhzaya is at her worst. When the moons of Eyre turn a blind eye to the world, the seals of Grithis weaken and the servants of the Painbringer, the ‘Soul Flayers’ are released upon the material plane. Twisted by the malevolent justice of the lordess of punishment, these blindfolded, pale and lanky armed monstrosities seek out wrongdoers, criminals, and murderers, capturing mortals who stink with the smell debauchery and sin. Their screaming bodies are then dragged down into the depths of Grithis to suffer the agonizing fate of their ancestors. This event and the tales of superstition has forced the Greimbarg to hire clerics to bless their hideouts as to avoid the eyes of the Queen of Torment. Mortals often dress in garb resembling vicious beasts and demons in order to hide among the servants of the Painbringer. Court proceedings and prison transfers are handled swiftly and silently to avoid messy entanglements with the gruesome holiday. Parents tell stories of the queen of punishment as a means to keep young children from misbehaving, as R’ouhzaya, the Queen of Torture, is always watching.

The Song of Pain

1. Pain is Pleasure.
2. Sinful flesh is the best, but any flesh will do
3. Please, indulge yourself to fullest, I encourage it.
4. Mortals are only vessels of lust, waiting to exhibit sin.
5. I am always watching.

The Shriving - 11th of Kaarst 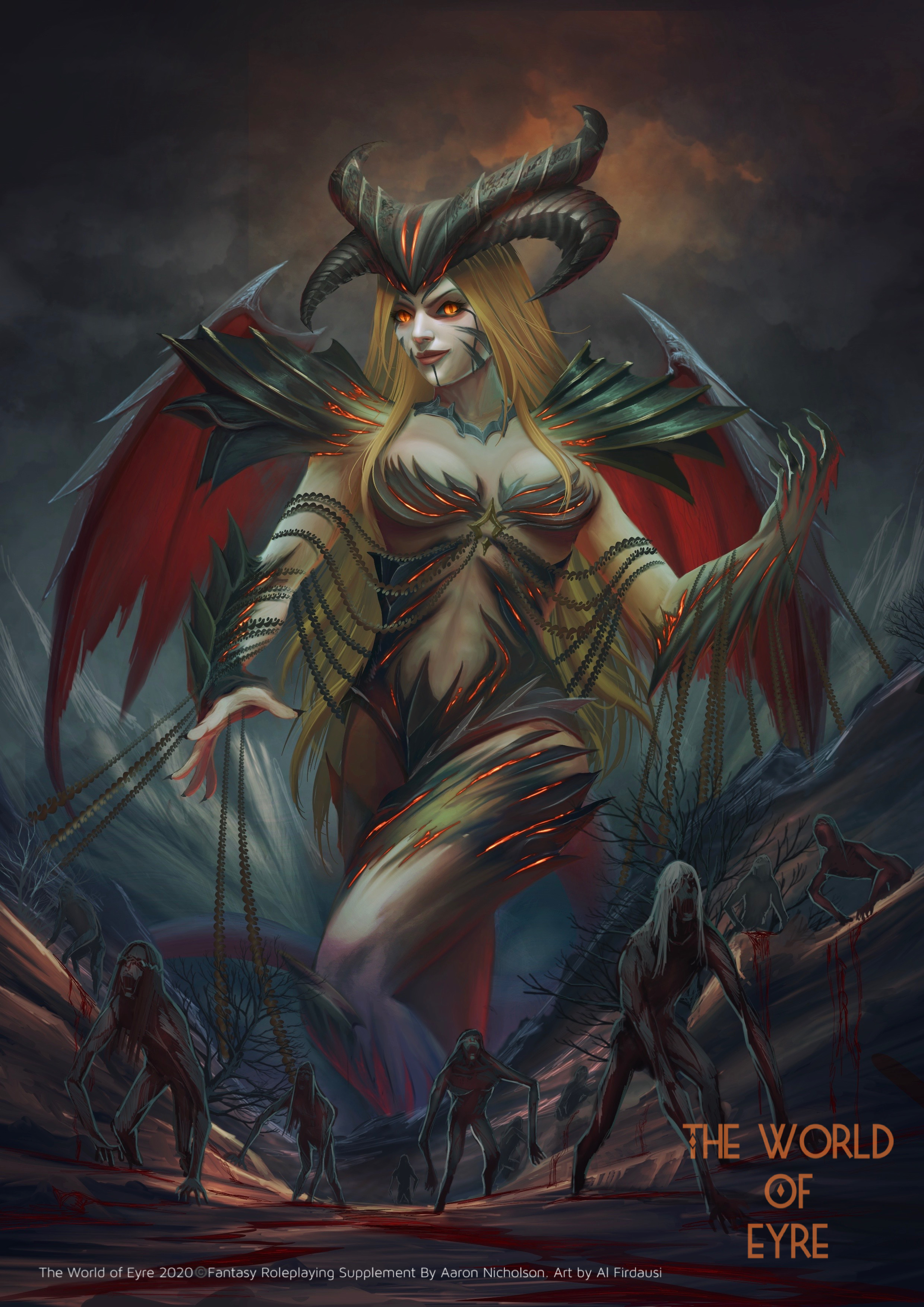 Remove these ads. Join the Worldbuilders Guild
The Chains of Yarenil