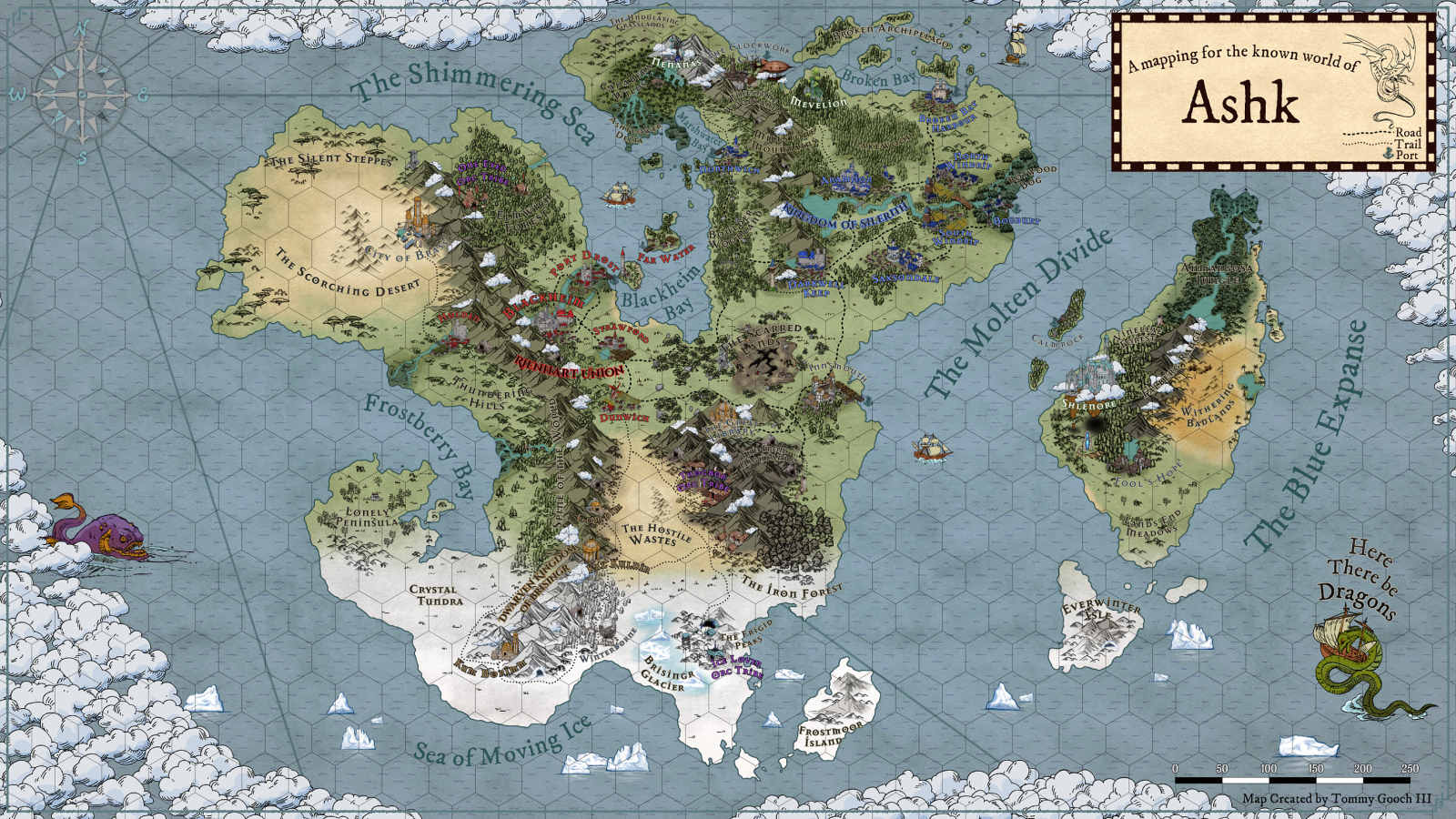 The World of Ashk

Tommy Gooch III
“The Known World of Ashk consists of two continents with the largest being Arrendyll, where the civilized nations call home, and the smaller being Eldamar, an untamed wild. Four nations are among the civilized nations of Arrendyll. Those being: the Kingdom of Silerith, the Reinhart Union, the Holy Cities of Corellon, and the Dwarven Kingdom of Brisingr. The largest independent faction being that of the Guild of Silver Sages; keepers of the Great Library of Azuth. Sages in the World of Ashk are what reputable magic wielders that are members of the guild call themselves. These sages keep a store of the world's knowledge in the Great Library, train upcoming sages in the arcane arts and how to respect the boundaries of reality, and more recently guard a vault of knowledge, artifacts, and magical items too powerful for mortal hands.   For over a hundred years at the end of the third age a conflict known as The War raged between the nations of Arrendyll culminating with a final confrontation in an area once known as the Placid Meadows. This battle would thereafter be referred to as The Last Battle for in a final attempt to push back the forces of the Kingdom of Silerith a great wizard named Xilcor the Deceptor of The Red Wizards who were loyal to the Reinhart Union deployed an artifact of unknown origin and unknown function to devastating effect called the Ulticron.   When the artifact was activated by the red wizard it shot forth beams of intense energy rending the land, vaporizing man and beast and even sky indiscriminately in an event called The Shattering. 'Shattering' because the artifact itself exploded utterly destroying more life in one instant than had died for the whole war up to that point. This event also turned the Placid Meadows into an uninhabitable undulating mess opening deep ravines into the Deep Below called the Scarred Lands.   The nations having seen what unbridled ignorance and use of dangerous arcana could bring all came together to sign the Treaty of Innsmouth, named for the independent city where the signing was completed. As part of the treaty the nations were required to vow not to take any further military actions in the ongoing conflicts, any magic or magical items or artifacts deemed too powerful or unknown to the Guild of Silver Sages would be placed inside a magical Vault in The Great Library of Azuth. There in the Halls of Infinium the Vault remains hidden to all but the High Sages keeping the world safe from wild arcana.   The year is 25 of the forth age, 25 A4 for short, and the civilized nations on the continent of Arrendyll have been in a tentative peace since the end of the third age and the signing of the treaty. Warm winds rise as spring breaks the winter on the slopes of the Millstone Mountains in the capitol city Aramoor of the Kingdom of Silerith. Excitement is in the air as the annual week long spring festival nears and travelers from all around Arrendyll begin the journey to the capitol of law and justice to revel in the festivities, sell goods of all kinds, and share rumors, politics, and stories both true and fictional.“
Tweet

The World of Ashk has 12 Followers