The Age of Devastation was preceded by the first great war; a war that raged for thirty years bringing death and destruction beyond even the darkest imagination. This story, however, centers on neither that war nor age, nor the leaders of the time; but simply on that of a humble dwarf.   Hofrin Grayfell was born into a family of miners and builders - each member of the male family line had proudly followed this tradition for generations. But Hofrin was different; he wanted adventure, but he also was afraid of it. He had never been recognized as brave, because he wasn't. He was not considered charismatic, because he wasn't. He had few close friends. The fact, he knew, was that he was ordinary. Yet still, he dreamed...

Shortly after the beginning of his eighty-first year, the rumblings of the great war began. Within two more, the dwarves of his clan were called to arms. Adventure had arrived, and he was still afraid. He took the simple axe his father had made for him and left his home with little hope of return.   The battles came quickly and there were many. After each one, survivors would account for their closest friends. No-one looked out for Hofrin. As he survived the early battles, his fellow dwarves could not hide their surprise he stood alive - he knew what they thought - it was just a matter of time before he fell. But as the battles went by one by one, and each time there stood a blood-stained Hofrin, his axe held firmly, the other survivors looked upon him with ever-deepening respect.

Despite the absence of close friends and respect from his kin, he fought for his comrades - he fought for his family. Every enemy that fell to his blade saw his burning eyes at the last. They did not recognize what they saw, for they themselves did not, could not, possess it. Hofrin's eyes blazed not with anger or hate towards his foes, but with the fire of love for his fellows; they burned hotter than any hate could possibly fuel. And his fellows returned his love.   As a consequence of hideously growing death tolls, the armies of all allied nations became ever more mixed. Hofrin's fire did not diminish as his fellow dwarves became so few in number. His love for them grew as he fought in their honour and for the lives of his new family from nations and races he had never before heard of. His axe, now with a thousand notches, was the inspirational symbol for the rank and file. Those fighting alongside him roared his name in battle-cry, and even when they fell, his name was on their lips as they breathed their final word.

In the final days of the great war, all allies looked to Hofrin's axe held aloft amid the battlefield. Standards now bore it as their symbol, their rallying cry. But, after almost thirty years of the campaign, Hofrin was mortally wounded. In his final moments, he continued fighting, felling more of his enemies. His axe swirled and sang slashing at all opponents as if it fought for its master now. Then came the final dread hit - he fell. His slayer was quickly killed in turn as his comrades arrived too late. A circle was cleared around him as he lay there, clasping his axe to his chest speaking his final blood choked words into his blade. Hofrin was no longer afraid.

It is fabled that as his blood soaked into the haft of the axe, part of Hofrin's life-force flowed into it. His final words are believed to have sealed the first magical transference of life energy into an object. How or why this happened is unknown, as are Hofrin's final words.   The axe was removed from the battlefield but in the chaos of the days at the end of the war, it was lost. Some two thousand years on, its location remains a secret of the ages that followed.

The axe performs as a beautifully balanced weapon, and despite its battered condition, its blade causes full damage to opponents.
Physical Appearance 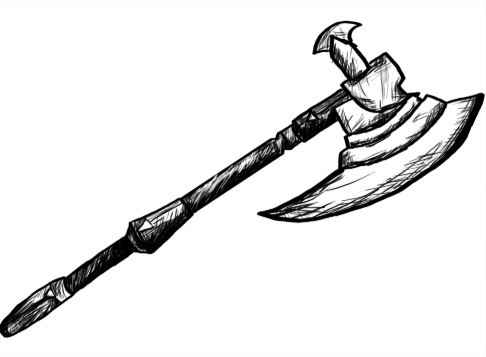 Item type
Unique Artifact
Weight
2 kilograms
Dimensions
3 feet in length
Raw materials & Components
The axe is of simple construction: an axe head mounted on a wooden haft about three feet long. It is lightly turned, with a curved blade.

It's most notable feature is how worn and battered it is. Any casual observer will likely dismiss the item as worthless.

To this day, the axe contains a sliver of Hofrin's life-force. Possession of the item instils a sense of inner confidence and bravery. Others perceive the individual in a more charismatic light. When used in battle, whilst the wielder is not immune to fear, they will not suffer any penalties usually associated with it.   The artifact has one final ability. If the possessor is in grave danger and is acting with love in their heart, the axe uses its remaining life-force to save them. Any attempt to strike an enemy will almost certainly succeed causing immense damage.   Once the battle is over, successful or otherwise, the life-force is utterly spent and the axe shatters into fragments - a final act of loyalty, sacrifice and love. As it does so the wielder, if still alive, will hear the final words that Hofrin uttered upon his death.
Cover art by Hasan Almasi: https://unsplash.com/@hasanalmasi
Axe image by: https://pngio.com/PNG/a125133-battle-axe-drawing-png.html
Summer Camp 2020
This article has no secrets.

I like that the axe looks so ordinary. That makes it even more interesting. I love the backstory of Hofrin too. He sounds like a really good guy.

Thanks again for your comments. I wanted the focus to be on the artifact's history rather than any powers it possesses. Really glad you enjoyed reading it. Trevor x

I have a soft spot for stories of unlikely heroes and this is so well written.

Thank you - I'm so glad you liked it.

The story gave me the shivers!

Thank you - I'm hoping to use Manuscripts to write a few short stories soon and I may expand on this one - thanks again for reading my articles, it makes a big difference to me! :)