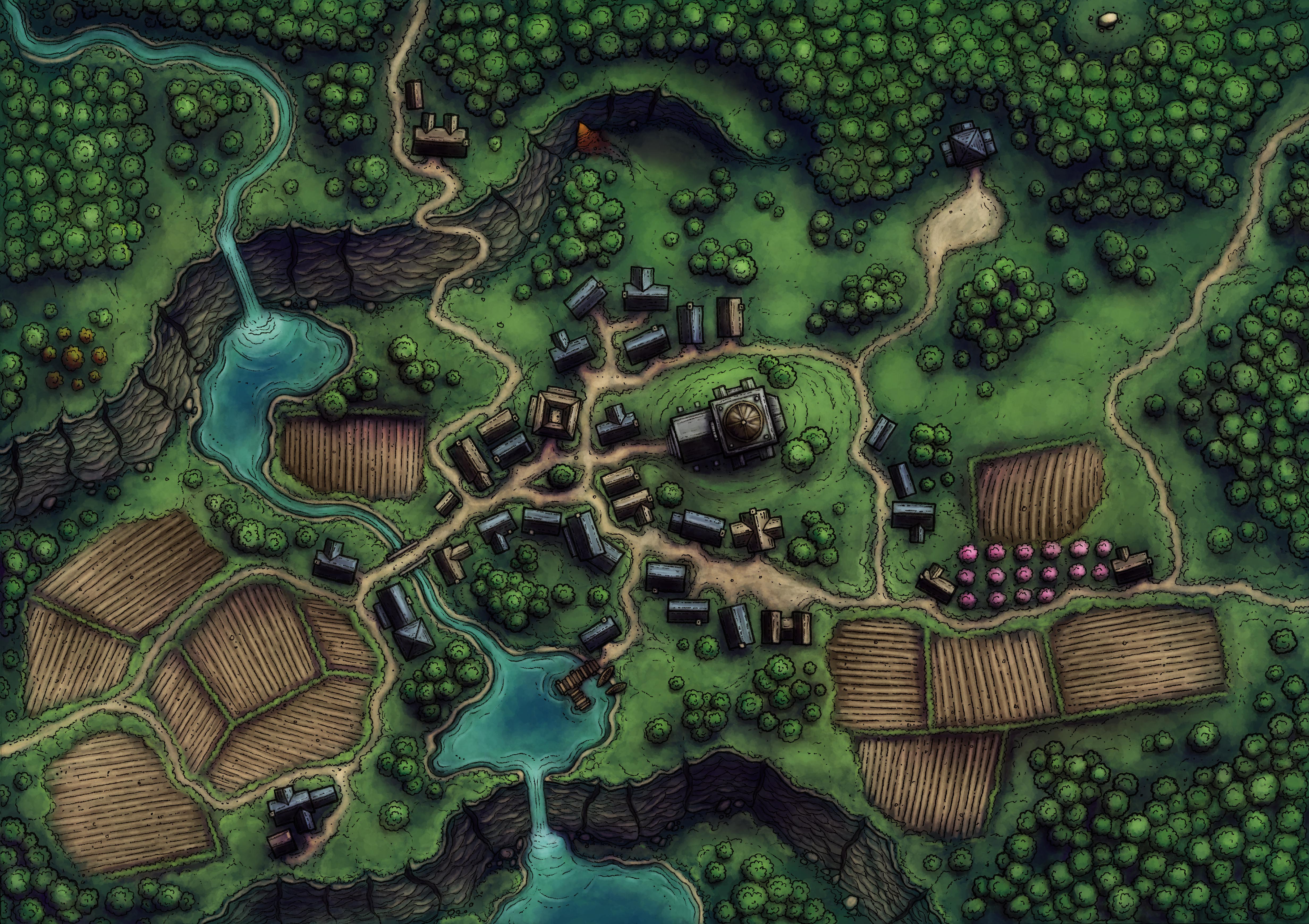 Sat in the foothills of the Raven's Peaks mountain range, Lower Peak gets her name from the small hill in the centre of the village upon which sits the Temple of Iae. Set in the idylic Surgate River valley, amidst rolling hills, lush farmland and surrounded by dense woodland, Lower Peak is the very picture of rustic country life.   Whilst very rural, Lower Peak contains most of the conveniences that are more usually found in a larger town. It contains a large Temple of Iae, a small Ochal Legion Garrison, as well as being home to the Dream Spire, home to the reclusive Arch-Wizard Jildor.   Lower Peak has been ruled for 12 years by Mayor Alariel, during which time it has grown rapidly into an aggriculture hub for Vedras City, a burgening stopover for travellers and merchants, as well as those seeking adventure and fortune in the sandy wastes of the Lost Barony to the North. The village sits within the domain of Baron Vedras, the northernmost remaining Barony of the Ochal Confederacy.

Lower Peak is governed by the Town Circle (or simply, The Circle), an elected group of 8 individuals who represent the town's interests. The head of the Town Council is the Mayor, currently Mayor Alariel. Membership on the Town Circle is for a period of 4 years, and there are no limits on the number of times an individual may be elected by their peers.   During Town Circle elections, every citizen may cast a vote for 2 members of the town to be elected to the council. The ballots are cast in secret, with the Temple of Iae ensuring honesty and integrity throughout the proceedings through magical means. The 8 villagers with the most votes are elected to the council, and the person with the most votes becomes the Mayor. The Chief Templar of Iae may veto a vote in the case of a tied ballot. Mayor Alariel has been voted to the council in 4 consecutive elections, and as Major in 3 of those.   Eligibility to vote in elections is based on two criteria, and both must be met. The voter must have resided in the village for a period of 3 months prior to the declaration of the election, and the voter must be declared of consenting age by either their parents, or the Chief Templar of Iae.   A Mayor or Town Circle member may be dismissed from their duties by unanimous vote of the remainder of the Town Circle. The remaining 7 members of the Town Circle will perform the duties of the dismissed member until the next election.

Defended by Lake Lancour to the south, Baron Vedras ordered the construction of a town wall following the invasion of Lower Peak by goblins. With the magical assistance of Arch-Mage Jildor and his golem servants, the wall was built in under a week. On first glance the wall appears to be simple grey stone, however upon closer inspection mystical flecks can be seen throughout the structure, indicative of the material's arcane nature.

Historically the primary industry of Lower Peak has been agricultural in nature, with intensive farming being common. The most common crops are barley, wheat, corn, flowers, and vegetables.   A small but steady trade in magical artefacts from the Dream Spire draws adventurers and wizards from afar.   With the recent growth in the town, there are several burgeoning industries, including alchemy and weaponsmithing.

The town gets her water supply from the Surgate River, which runs North to South through the village.   There are a number of prominent structures in and around the town.   In the centre of the village is the Temple of Iae. The Temple is situated on a hill in the middle of the village, and was once the main gathering point for the village.   The new beating heart of the village is the Sanguine Dawn Inn, which has fuelled much of the growth in the town, as merchants and travelling adventurers are often not the most devoid souls.   In the last 4 years, a Garrison of the Ochal Legion has been constructed, although with the war to the south the Garrison is almost entire deployed, with only those mentally or physically unable to fight remaining behind.   Finally, The Dream Spire sits just to the east of the town. It is speculated that the Dream Spire was the original structure built in the region many generations ago, and the rest of the village sprung up to service the Spire, and to reap the rewards of service to such a powerful Arch-Wizard.

The oldest building in Lower Peak is the Dream Spire, dating from The Hazrad Imperium. This Spire was claimed by Arch-Mage Jildor around 500 AP, and has been his primary residence since. In the first centuries that followed Jildor was very active in world affairs, and Lower Peak developed to support the eccentic wizard. Over time, Jildor withdrew from the public eye, and the resources he required from Lower Peak dwindled, causing the town to shrink.   With the advent of the Grey Plague, Lower Peak became the farthest frontier town in the Ochal Confederacy, and saw an influx of refugees, adventurers, and those seeking opportunity and fortune on the edges of civilisation. For the next 300 years, Lower Peak remained constant in size, until Mayor Alariel used her political briliance to build closer ties with Vedras City and cause a rapid increase in the town's aggriculture industry.   Lower Peak and Mayor Alariel are at the forefront of the Ochal Confederacy's efforts to resists the advance of the monstrous races through the Fallen Barony to the north.
Founding Date
c500 AP
Founders
Type
Town
Population
1,059
Inhabitant Demonym
Peakers
Location under
Ochal Confederacy
Owner/Ruler
Antoinette Alariel

Governed for 12 years, and is a key driver for change in the region. She is a softly spoken human in her middle years, known for her charisma and wisdom, and the ability to cut through a problem to a pragmatic solution.
Alariel is a power wizard who studied under Jildor before switching to politics. She is the first person in generations to be trained by the Arch-Wizard, and the first in longer still to drawn him back into public life.

In the Ochal Confederacy, Jildor is somewhat of a legend. He has been a fixture of regional politics and magical experimentation since before the fall of the Hazrad Imperium, and was instrumental in the foundation of the Vedras Barony.
Jildor resides in the Dream Spire, a slender tower overlooking the town. Centuries ago he withdrew from public life, though he has recently begun to take a more active interest again.

A member of the Town Circle, and a prominent leader in the town. Lokkon operates the main forge and sells metalworks, arms and armour.
He lives with his son, Ben, who was recently rescued after being kidnapped by Goblins. Ben subsequently underwent a transformation and draconic heritage presented itself.

Adda lives in a secluded cottage on the outskirts of Lower Peak. Though she is reclusive, the townspeople have come to rely on her for her ability to predict their futures using clay runes from her far-off home of Ula.
As a Jötnar, Adda bears some visual similarities with the more common Goliaths, though she is 'only' 6 foot tall, and is not hairless.

Rhed is vital to the agriculture in the region, and therefore to the economic prosperity of Lower Peak as a whole. As a Faun in his twilight years, Rhed has made Lower Peak his home, and intends to remain until his spirit returns to the home beyond the grave.
Often understandably mistaken for a druid, Rhed is a Green Witch and has a innate connection with flora and fauna enabling him to encourage rapid growth and health in the crops and farm animals of the local farms.

Land is the landlord of the town's main Tavern, the Sanguine Dawn, which he inherited from his mother when she passed some 150 years ago. Lane is a tall Elf approaching his middle years.

Lortha is the Hofgothi, or head priest, of the Temple of Iae in Lower Peak. He was appointed 4 months ago following the mysterious disappearance of the previous Hofgothi. In recent centuries the worship of Iae has been waning, and Lortha has vowed to reverse this.

As the towns herbalist and apothecary, Nedda plays a vital role in the health and wellbeing of the townsfolk. A halfling woman barely into her adult years, Nedda is somewhat of a prodigy who seemed to develop her skills overnight when the previous apothecary was taken ill and died of fever.

Zhenya is the owner of the general store in town. Her family have run the establishment for generations, mainly catering to local farmers and tradespeople. She does, however, occassionally trade with Arch-Mage Jildor for simple magic items that she sells to passing adventurers.