Sikode is an aki n'di ori from the so vara nediki tribe, Kilen'dika family, on his father's side. His mother's tribal and family history is a mystery, and he received no shortage of teasing about that as a child.   Sikode decided long ago he would not "leave this world and old and forgotten man." He risks himself in dire situations to enhance his reputation of strength, and plays up his reclusiveness to maintain an air of mystery about himself and his past. He firmly believes that birth does not confer strength or wisdom, compassion or empathy, and that one must grow them on their own. He refuses to respect those who expect their family name and wealth to guarantee them privilege and status. His tolerance for fools is non-existent. His tolerance for those who take advantage of the innocent and powerless is less than that. He has no faith in the average person to do the right thing, even when that proves easier than evil.

Sikode is the first-born of Tanji, e ada sindosina, and Iko, a guardsman for the town of Likeda. He had a happy early childhood, was inquisitive and creative and loving, until he decided to join the Ven ki adiro, the local Flame kido, at age seven. Their cruelty and bullying quickly turned him from an outgoing child into a reclusive and secretive one. Tanji, hating the change, insisted he school at the large, regional mystery arts school headed by Nikori, a famed and talented shadowartist. He reluctantly agreed, though he believed a martial talent far more important than a mystery one.   He excelled at wielding magick, and privately believed his skills far exceeded those of his master. He took on several small jobs around Likeda and U di ve'rin to pay for his schooling, practices at the kido, and to help his cash-strapped parents care for his three younger siblings.   The intensity of his study had a purpose. His earliest memories were of dreams about a fist-sized diamond atop a silver wand, the artifact associated with Lajaka, Ice Dragon of Lassa. He read extensively about dragons, and decided he wanted to obtain two artifacts; the Ice Stone, which granted access to Lajaka, and the Flame Stone, which granted access to Kykini Cede, Flame Dragon of Kassak.

Sikode's dragon dreams would have to wait. He left Rakan at 19, bitter, angry, and refused to look back. He felt the country held nothing for a powerful but poor wielder and Flame warrior, and sought one that did. He ended up traveling to Shayd, the captial of Illena, with a carnival. Illena was deep in a stalemate civil war, and the carnival owner saw profit in a ravaged land in desperate need of entertainment. Sikode performed magickal tricks and flaunted his handsomeness, earning enough coin to keep himself fed and to share among the other performers who did not fare as well.   The people in the capital were eager for something to take their minds off the current war. The carnival did extremely well, to the point aristocrats attended performances. One of those aristocrats, Iavan, invited Sikode to the Shayd palace to perform for the court. Not one to pass up such an opportunity, he agreed--and performed tricks along with serious wieldings that impressed Iavan and his cousin, who happened to be King Shiel. Artiste Loreval, head of the Monarch's Claws, saw great potential in the young wielder. His Majesty hired him, practically on the spot.   Sikode proved himself in just a few seasons. His skills on the battlefield frightened enemy combatants. His quick rise in fame concerned Eder's supporters and they schemed to have Illena's strongest wielder, who also supported Eder, duel him. The enemy expected a quick defeat of the Rakan and a very public accounting for Shiel and his choices. Sikode had never fought so skilled a wielder before, and made a production of burning him into a pile of ash. Scared of the power that now backed the throne and uncertain of his continued survival, Eder surrendered.

Sikode did not hesitate to follow Shiel when he invaded Merren, and discovered far more wrong with the country than a greedy, incompetent despot. Bloodmages had taken root, and their corruption tainted everything. Knowing Merren had a large Rakan population, which included his father's cousin, he fought to protect them and his new liege. He burned everything associated with the bloodmages to the ground--including the Javone palace. Merren commoners considered him a hero, though aristocrats were far more hesitant to lay accolades at his feet.   After the victory in Merren, Shiel sent Sikode to Soline to scout the royal court. In this capacity, he first became aware of Shiobe, though he never anticipated their first, surprise encounter. 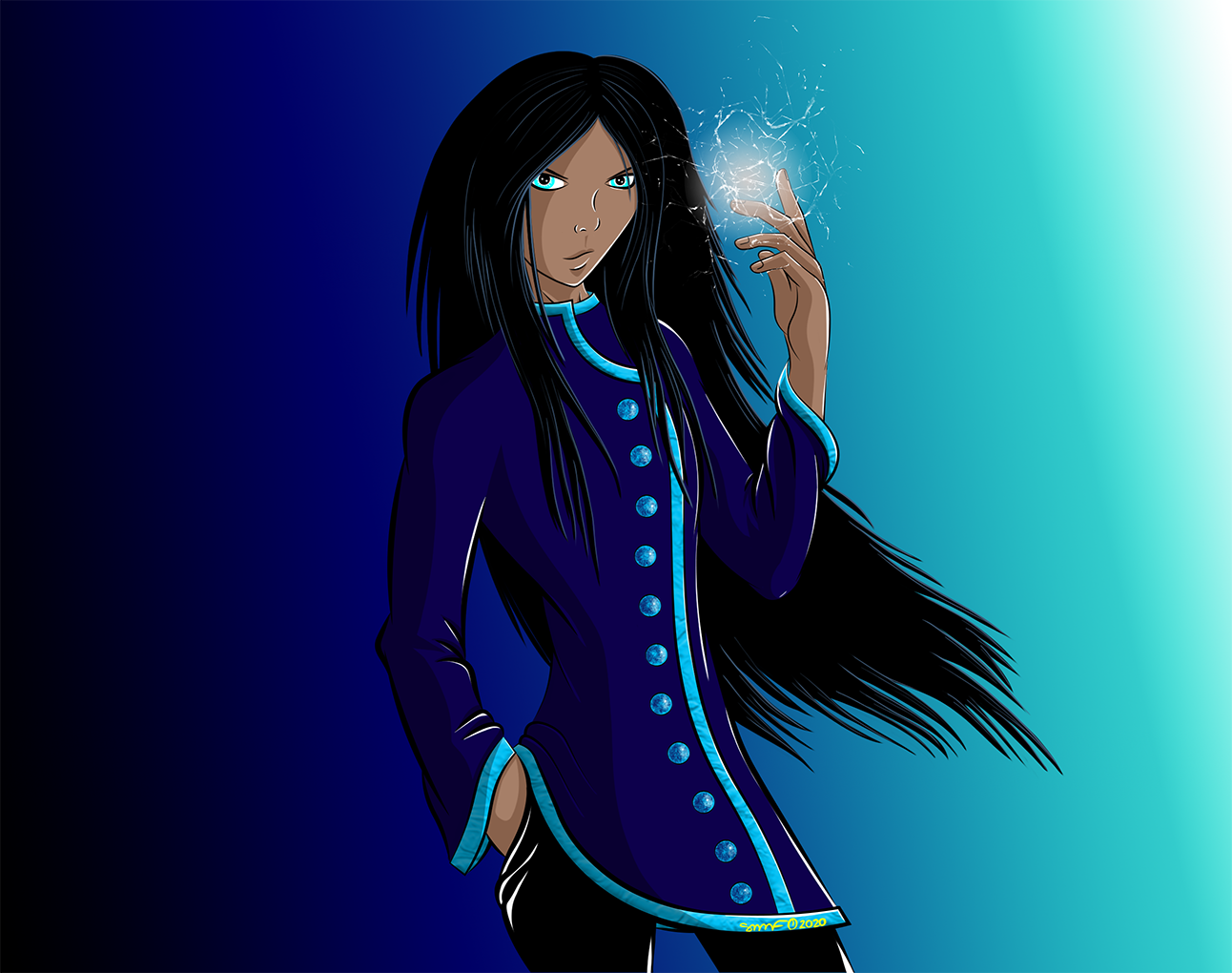 Magick:
Sikode's magick stength lies in shielding and healing. He creates a wielded shield for sigh and sound that none but Shiobe can perceive.   He is adept at kick-portals, and he has yet to reach the limit of his range.

Flame Skills:
Sikode is a superb martial combatant, though he prefers to remain aloof and use magick in battle. His practice of the Flame martial art has made him stronger than he appears.

Weapons:
Sikode favors wielded darts that explode on impact. He carries Istikal, one of his mother's e ada sindo swords, and the Dagger of Desperation, a gift from Shiel. The jewels in the hilt act as magickal wells, which he can draw from if he needs a quick power recharge.
Children
Return to Top
Wellspring Dragons World