Shiobe is a freelance fighter and scholar. She knows eight modern Seari languages, some of their ancient incarnations, and is seeped in history, literature and lore. Following her father Pendarrin's influence, she has an intense interest in the country of Rakan, the Jonna Empire and dragon mythology. She also loves the legends of warrior women and dreams of walking in their footsteps.   Her dream of becoming a legendary swordswoman overshadows her more practical language skills. She moves to Iova, the captial of Soline, to achieve that dream. She wants to make more of herself than a backwoods translator, but finds her eagerly anticiapted new dawn slowly dimming into the darkness of the Lower City. Deserted by her ex-lover and her best friend, she wanders through a bleak and depressing life until she meets Sikode. He offers her a future of adventure and danger, and she eagerly accepts. She wants a new, brilliant dawn, and if that entails partnering with a foreign spy, so be it.

Early Years
Shiobe is the first-born of Pendarrin and Circioh. Pendarrin is a genophyte, a renowned scholar who studied at the Iovan Palace School. Circioh is a rural descendant of the Condi who settled in Soline during the reign of the Jonna Empire.
Education
By age five, Shiobe knew Catak, Jonnese and Daione, and her father spaced out the remainder of her language learning, beginning with Siodame. While she attended the local Sheune school, the majority of her instruction came from Pendarrin, who provided a well-rounded education with a focus on languages, history and literature. She often delved into books far in advance of her age and maturity level, and her parent never managed to halt her thirst for forbidden tomes. "Wait until you are older" held no meaning for her.   At age eight she began to practice with Tonna, the local swordsman and fighting expert. Her father disapproved of her interest, but he never dissuaded her from learning the art of the sword.   At around the same time she saw a carnival act in Ginner, and the knife thrower enchanted her. Her interest in smaller blades blossomed, and she became adept at finding smaller knives and daggers to throw. She set up a target in the woods, far enough from Tura no one would accidentally happen upon it, and honed her skills.
Relationships
Shiobe had few social bonds outside her family, due to the more conservative elements of the community believing her too 'odd'. Despite the disapproval, her father proudly declared her his protégé and her mother supported her scholarly interests. She and her brother, Darrin, had a loving older sister-younger brother relationship, though she and her little sister, Vandi, never connected.   Her mother's friend, Vhellah, ignored the gossip and approved of the friendship between Shiobe and her daughter, Kitta. She had a brief but loving romantic relationship with Zaiden, which ended before he became Tura's guard captain, and finally became Rien's lover before moving with him to Iova, the capital of Soline.
Iova
Shiobe accepted Rien's invitation to move with him to Iova. Her parents strongly disapproved and refused to back her choice, but Shiobe had higher aspirations than translating old manuscripts with her father in a rural border town while evading small-town bullies.   She looked forward to a large city and its benefits, but realized very quickly she did not have the wealth or social backing to properly take advantage of them. Work for freelance swordswomen was scarce at the best of times, and the local guilds saw her gender as a liability. Her education and translation skills would have taken her further if most potential employers thought her learning, done with her father rather than at an expensive academy, was the equivalent of a paid schooling. Her father's friend and broker, Trin, offered her the odd translation job, helping her slowly build a reputation among his scholarly clients, and while she appreciated the work, it would not support her financially.   Her personal life fared no better. Rien rose quickly in the ranks of the palace guard after catching the queen's eye, and broke their relationship when it became too inconvenient. Kitta, who had also moved to Iova searching for better opportunities, found Shiobe's friendship a liability in the Iovan court, and, in a quieter way, broke from her as well.   Shiobe lived off a paltry stipend provided by the palace to freelance fighters who help during riots, and the pay she received from small translation jobs. Her excitement concerning her childhood dreams crashed into the darkness of the Lower City, and she plodded through a dim and desolate life. She desperately desired a new dawn—and had no idea how to accomplish it.   Then she met Sikode. 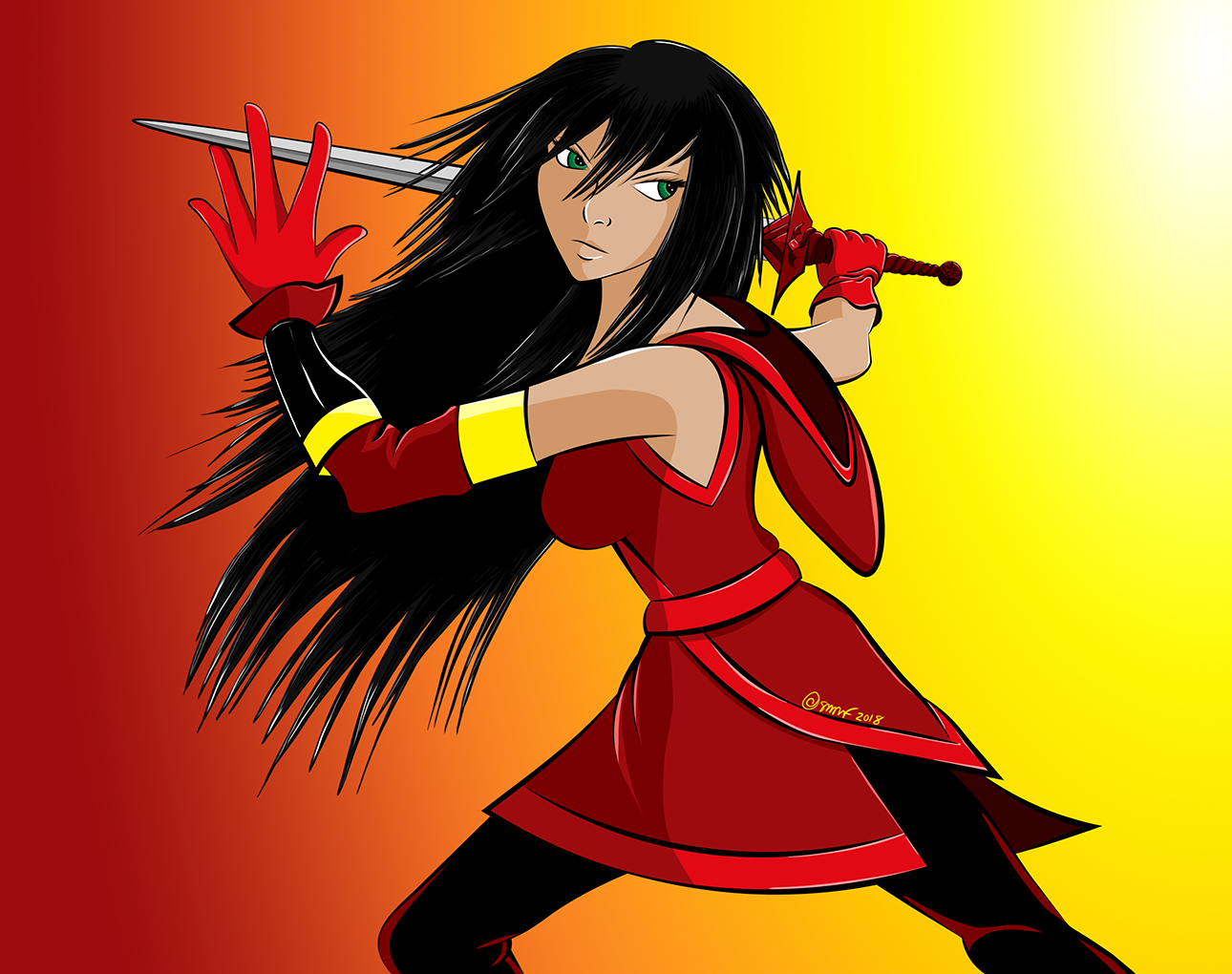 History and Literature:
Shiobe learned a great deal from her genophyte father, especially concerning dragons, the Jonna Empire, and Rakan

Weapons:
Shiobe fights with a sword, but is spectacular with throwing blades
Children
Return to Top
Wellspring Dragons World