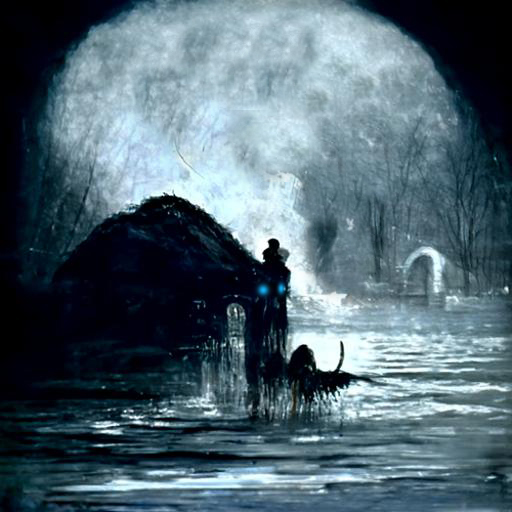 image by Shanda Nelson using Night Cafe
The lackshackle is a myth traced back to the Jonna Empire's invasion of the Midem lands two thousand years ago. Unscrupulous Condi generals would taint water supplies by purposefully throwing the dead bodies of their enemies into them, forcing locals to rely on the invaders for fresh water.   It did not take long before stories surfaced of the dead rising up and snatching the living from lakeshores and wells, using strands of grass to shackle legs before dragging friends and family into the depths, creating company for their undeath existence.   Unsurprisingly, the first lackshackle stories emerged from the communities around the Bane, and spread from there.


"But Mamnah--"   The hunched old woman turns from the stove, studying the four children with glinting eyes. "I told you not to play at the lake at night."   "Yes, but--"   She stamps her cane into the creaky floorboards, commanding silence. "Let me tell you a story."   "Not one of your stories," the eldest boy groans, ready to sulk.   Her eyes narrow at the ten-year-old, and she raises her chin.   "In the dead of night, when the moon is bright and the shadows long, certain Solin lakes boil and bubble. They froth and they shudder. Foam laps the shores, leaving behind stringy black plants and dead fish without eyes.   "Blue-tainted water curls across the surfaces, their glow lingering before sinking into the depths. The dank smell of mold and rotting wood assails the air, and the deer who drink at the lakes swiftly leap away, the smaller creatures, the skunks and raccoons and mice who lap the water, who wash their final meal in the foamy waves, choke and collapse and their final breath stutters out between blackening teeth.   "Groans rise from the lakes, deep enough to vibrate chest bones and take away breath. They echo through the trees and twigs snap and branches fall, and bark crumbles from the trunks.   "The centers of the lakes fountain, water rushing away as black shadows slowly rise up. Two bright blue dots glow at the tops of heads, and stringy bits of watergrass hang limply from the chins like beards, trailing in the water as they swim to shore. Hunched, they waft back and forth as they heave themselves to land. The closer to shore, the taller they become, their necks stretching above their protruding spines to near tree height.   "The fish and the small creatures begin to smoke, and their fur singes off and their flesh curls into ash. The necks lower and the heads tip back, revealing black, toothless maws that smell of dead things, waste, and smoke. Jaws scoop the remains and the dirt and the sand and the rock into their mouths, and they swallow everything before moving to the next gulp."   The eldest boy rolls his eyes, though the younger stare at her, concerned, antsy. "And I bet our lake is one of them," he grumbles.   "And so it is. Only recently, two who love their lake, who see it as a quiet place of fishing and play, decided to visit. But while it is a beauteous bounty of food and sights in the day, not so at night. They wandered to the sandy beach by the old oak, laughing, before they realized a shadow stood before them. They thought him an old bent man, and hailed him, wondering why he, too, enjoyed the lake at night. He turned, blue glows blinking, before his neck stretched taller than the trees. They shrieked as his head raced to them, moist and fleshy lips biting into arms and shoulders and ripping clothes. His beard wrapped around their legs, and he shuffled backwards, pulling their struggling bodies to the water.   "He dragged them through the dead fish with no eyes, the bits and pieces of small animals he had yet to eat. He splashed into the water just as those who lived nearest the lake, and who heard the screams, arrived, carrying lit branches of sweet-smelling banish pine. They swiped at the beard, and it caught fire. Some strands broke into burnt chunks, but not enough. He raised his head, pulling his victims up, and he--"   ROAR! from the kitchen window. The four children shriek as two blue glows pop up between the open shutters. Screaming, they race away, to the safety of the bedroom, to the safety of their mother.   The old woman laughs along with the monster. Her harried daughter rushes in, then sags in exasperated anger. "Mom, Dad!"   "What?" the old woman asks. "When you were their age, the lakeshackle kept you from the lake at night, didn't he?"   Her daughter growls before returning to her terrified children. The old man quietly enters the kitchen, chuckling, and they kiss, satisfied that they have frightened another generation into staying away from the lake without supervision.
The Creation of Elthessera
Myth
Myth of Velvynis

Answering: "a myth or urban legend about a "monster""
Visit Kwyn Marie's Competition Page Check all other answers to this prompt Competition Homepage