The way is open to those who chance the mists. It is not a light undertaking.


History
Sylfaodolon claim that Ceaque implemented the first kick-portal, shortly after he created the twilight mists. He wished for a faster way to traverse between far-distant places on Elthessera.   Over the millennia, mortals have continuously claimed that their deity gifted their religious order with the magickal means of travel, proving their holy worth (very conveniently, of course). Various mystery arts traditions take credit for the mode of transportation, muddying the waters. Modern scholars have traced the different incarnations of kick-portals back at least sixteen thousand years, and the mentions in those ancient texts refer to lost other books that also speak of them.   The Well has several dragon-ancient volumes in its libraries that refer to the wielding, but they do not list anyone but Ceaque as having developed it.
All artwork by Shanda Nelson unless otherwise stated 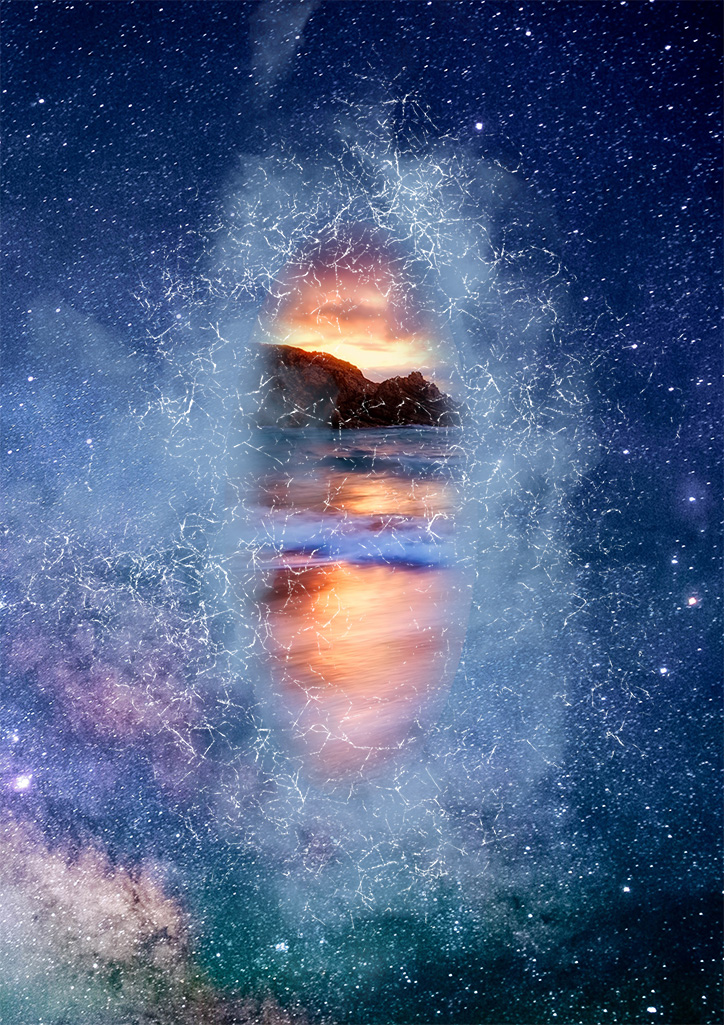 Description
A kick-portal is a wielding that mystery artists use to quickly traverse long distances with one step.   They have an inception site, a reception site, and the twilight mists to smooth the way between. When wielded, they look like a glowing oval doorway that hovers mid-air. They allow 1-2 people through at a time; larger portals are unstable. Sometimes the oval is transparent and shows the reception place, but most often it simply glows bright.   Since non-wielders cannot sense magick, those who initiate the kick-portal will add color to the spell, which allows all using it to see it.
How Kick-portals Work


Only the most powerful mystery artists can create kick-portals due to the drain on an individual's magick well. If a wielder becomes tired, the magick feeding the portal wavers or stutters. If it's bad enough, the portal closes and anyone trapped between when it collapses is transported to the Void. 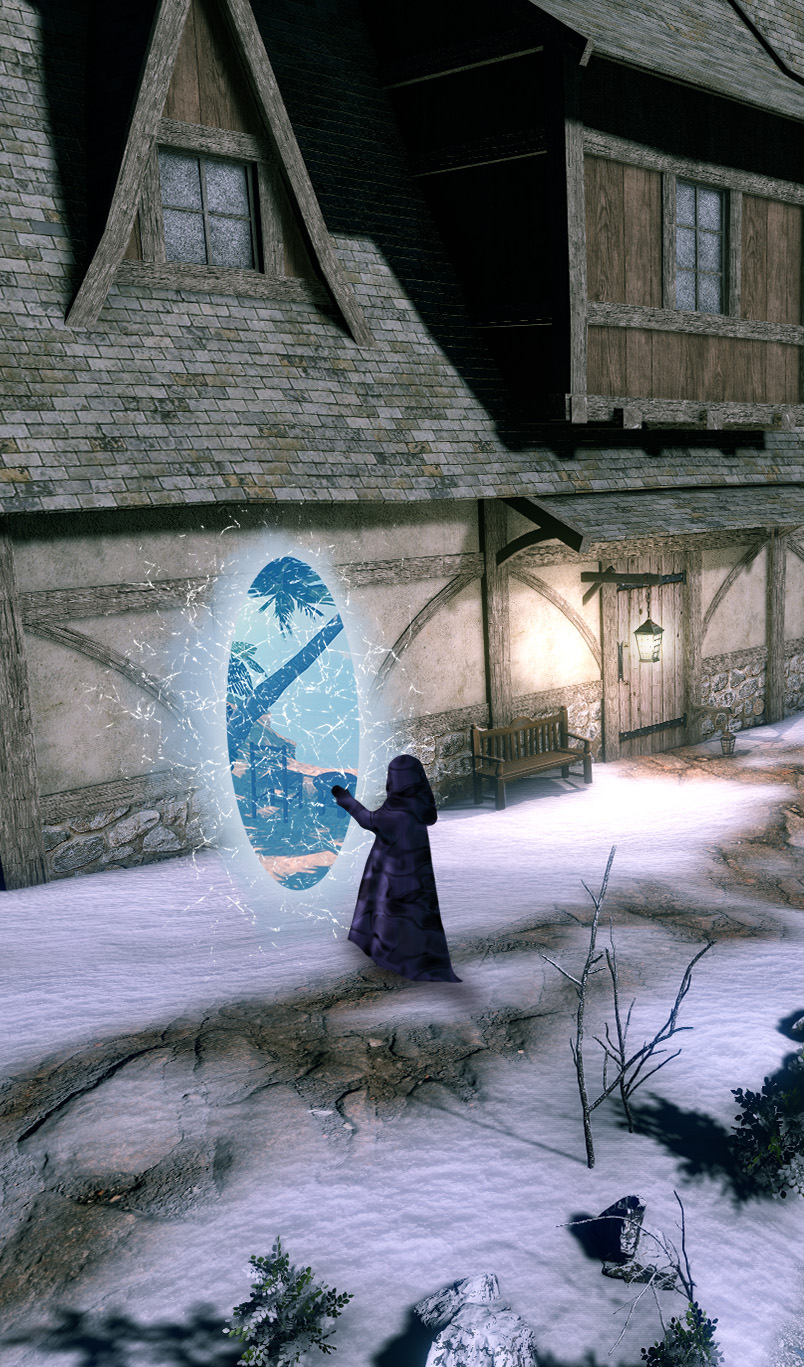 The distance between the inception and reception sites of a kick-portal are limited only by the wielder's magickal well. The longer the distance, the more of a drain on energy. That being said, some mystery artists, afraid of creating a kick-portal that spans too much distance, keep their travel short and confined to the breadth of a city, or the length of a valley. Some, however, travel continents.
Sylfaodolon create permanent kick-portals from their platforms to their demenses in Arberiss. Scholars are not certain of the distance between, but it is immense. This form of transit uses a hook.
While governments are interested in finding a way to quickly transport soldiers from one place to another, large kick-portals have never proven stable enough for armies to pass through at once. This affects beings as large as dragons, and only one can use the kick-portal at any given moment. 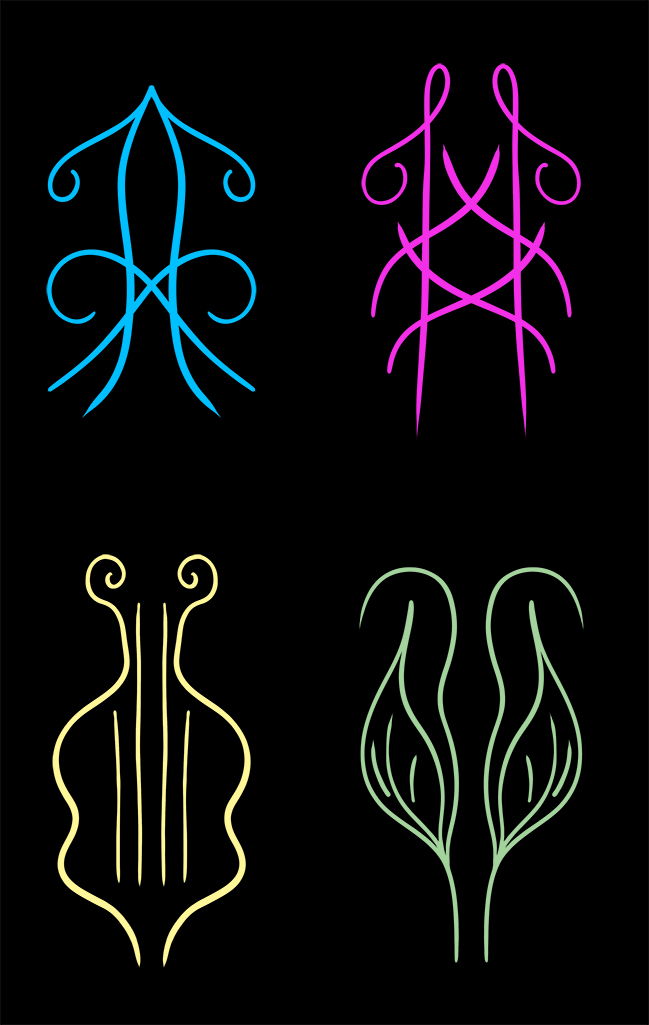 Examples of glyphs. While they can be as simple as a line or circle, most mystery artists like complicated designs.

Hooks
Hooks are the way wielders can access reception sites they have never visited. They are a magickal glyph and can be attached to anything, though most wielders prefer to place them on something solid that is not likely to move, like the side of a building.   There are two parts to a hook:   Wielders trigger the linking spell in the inception glyph. The spell traverses the twilight mists to reach the reception glyph, which links the two glyphs. Once linked, the wielder can open the kick-portal along the path.   While wielders prefer stationary hooks, they can place glyphs on living beings. Wielders normally put them on the backs of the hands, though any part of the body will do. They make the connection through the hook glyphs, but the opening at the inception site is created separately from the glyph. Trouble can arise if the person with the inception glyph walks through the kick-portal before the wielder is ready to close it, "moving" the inception site and collapsing the portal.   Glyphs are colored by the wielder so non-magick users can see them. They are reflected along the y axis, and represent the two sides of the kick-portal "doors". The glyphs at each end are identical, which is supposed to aid inception glyphs in connecting to their twins, but studies have shown that the link is magickal signatures, not the design.   The design still has an important role, however; wielders use them to denote specific reception places. Each mystery artist powerful enough to create a kick-portal has their own set of glphs they use, and they never duplicate designs. Some carry a list that tells them where each glyph leads, because it's embarrassing to chose the wrong one and end up at your favorite restaurant rather than your lover's bedroom.

Mystery artists have attempted assassination through kick-portal, but the movement of a target combined with the resistance of opening a kick-portal in something solid rather than air, makes it a less than ideal tactic. It's far simpler to kick-portal near the target and then use offensive magicks.

Tears
A misformed kick-portal is called a tear. The magick used to create it warps; this can happen at anytime during the process, when one or both doorways are open. In the best case scenario, the portal closes. In the worst, it explodes, causing destruction in the sunlit realm at both the inception and reception sites, as well as the twilight mists and the twilight realm, which share the same space, but on separate layers.   This explosion can be devastating. Entire cities can be wiped away in the blink of an eye. Militaries have long sought to harness this destructive accident, but no one has ever found a way to only blow up the reception site; the inception site always goes with it.   Tears are extremely difficult to close. Kick-portals do not fail in the same way, and the tear may explode before interested parties discover the problem. Even when they find the problem, they may not be able to fix it in time.   Tears are exceptionally good at ripping through shielding, no matter the strength of the mystery artist who wielded them. It's almost accepted as fact, that no one but a sylfaone can protect themselves from an explosive tear.   While not every tear explodes, it is a danger every wielder needs to carefully consider before they attempt to create a kick-portal. Even those who use them so often they are considered a routing spell, can make a disasterous mistake.
Return to Top
Wellspring Dragons World
Spells
Magickal Wells