The Illusionist and the Star-Chosen Daughter

My love bears a scar that looked as though the goddess Herself has reached down and drawn a new Constellation onto the face of a mortal. My love teaches the very stars how to shine, guiding my heart towards her, like a storm-drowned ship fighting desperately to swim towards the light of a distant lighthouse. And yet... And yet, I live as the shadow of the moon against the night sky: beholden to her beauty, though I know her gaze will never fall on me.
— An excerpt from the Illusionist's monologue, by Lucrèce Azaïs

The Illusionist and the Star-Chosen Daughter is a popular romance story from the country of Lormont. The tale was first performed as a play at the wedding of Lady Mélodie Thevenet to Count Olivier Moreau, written by Lucrèce Azaïs in 97SGC. The play became an instant success amongst courtiers and, by the end of the year, Azaïs's masterpiece had been watched by the Roi and Roia themselves on no less than three occassions.   In the modern era, the script has been transcribed into every Saeric language and has been formed as operas, ballets and daring acrobatic displays.

The story begins in a whirlwind of chaos and screams: Roi Larrecin has been murdered, his body dropping from the rafters from a rope during a lavish, courtly banquet. What follows is a swift and otherwise bloodless coup, in which the cousin of the roi usurps the throne with the aid of his evil Illusionists. They hold a young Hominid under a Powerful spell: an Illusionist named Timothée Levett, whose Power has been syphoned by his evil master to murder the true roi. Levett is rescued by the heroic figure of Rosceline Chauviré, the Lormontaii Throwback, who helps the Illusionist and the Crown Prince flee to Raskvaeric. The Illusionist, freed of the spell that controlled his Power, begs Prince Bayard's forgiveness for his role in the roi's death. He promises to use his Power to restore the throne to its rightful owner, and the Prince embraces him as a brother.   Uniting with the Raskvaerii Throwback, Cedomir Ilyuhkin, Prince Bayard seizes back control of his throne during the Usurper's coronation. In the split second before the starlit priest places the crown upon the Usurper's head, the Prince throws off his disguise and arrests his foe. The mournful occassion of the coronation morphs into a joyous treason trial, during which the Usurper is sentenced to death. Before the ceremonial sword of state (controversially protrayed as the weapon of execution by the hands of the Prince) can fall on the pretender's neck, Prince Bayard falters. It is at this point that one of the plays most infamous speeches is heard:

You gambled on the throne with nothing but a daughter to your name, Usurper. You hoped to forge a dynasty through her womb, by marrying her to that most villainous rogue, Count Hérisson. By the guidance of the stars, I swear that is not your legacy. I hereby grant you a stay of execution so that you might witness the marriage of your daughter to my faithful Illusionist. You shall be the ancestor of nothing but mongrels and fiends - his blood will suffocate every drop of starlight from hers, for not even the heavenly light of the stars could stand against the pollution of Perdition.

The marriage is performed in front of the kneeling Usurper. The curtains fall on the first act as the Prince (controversially) swings his blade.

The play resumes with a dance sequence, with the Star-Chosen Daughter trapped in a nighmare of shadowed figures. Most are featureless save for four wearing hideous masks, created to look like grotesque representations of the actors who played the Evil Illusionist, Prince Bayard, Rosceline Chauviré and the Usurper. A final figure enters the dance: a man wearing a mask with the distorted features of Timothée Levett. With one final crescendo, the last figure unmasks himself as the actor playing Levett, implying that the Illusionist has woken his wife from her nightmare.   The pair begin to talk from seperate sides of the stage, growing closer together as their conversation continues. They speak of the dual nature of Hominids: they are not man, but neither are they Beast. The Illusionist agrees that while the stars blessed him with the physique and beauty of a man, he has the heart and Soul of a true Mongrel. At some point during their conversation, a soloist on a flute begins a haunting melody in which the two actors begin to dance. Their characters are seemingly unaware of their growing intimacy or their increasingly dancing as a pair, until the Star-Chosen Daughter leans up and embraces the Illusionist. She breaks away, horrified, and flees that stage, prompting Levett's first, love-struck monologue.   The next scene is that of a large banquet, much like the scenary in Act One where Roi Larrecin was murdered. Roi Bayard makes a speech congratulating the court on his first year as the Star-Chosen Roi of Lormont. There is a brief Illusionist display by Levett; depending on whether or not the actor is an Illusionist himself, fireworks or more mundane trickery cane be performed. The display is interupted by the appearance of the Mesmirised-Star-Chosen Daughter (dressed in black), who makes Levett ruin his display. She continues around the tables, tampering with the food, drinks or costumes of the other actors. When he reaches the throne, she greets the Roi before sinisterly moving behind it - only to reappear on the other side as the Evil Illusionist. There is a fight between the two Illusionists (advances in pyrotechnics can prevent modern performances from needing to rely on Illusionist Power) as Levett tries to prevent his Roi from being murdered like his father. The Evil Illusionist is about to strike down Levett when the Star-Chosen Daughter, woken from her spell (and resplendent in a new costume) dives between them. The Evil Illusionist's death blow strikes her instead.

After a tearful farewell to her true love, the Star-Chosen Daughter dies in Levett's arms. The Evil Illusionist is dragged away as the courtiers clear the stage, leaving the two lovers alone for Levett's final monologue. He curses the Stars for being born a Hominid, because this meant he never deserved the love of this mortal woman. He was a fool to think their love could last. Before the curtains fall for the last time, the Illusionist anger at the Stars changes to thanksgiving. He reveals that the Star-Chosen Daughter was carrying his child, and that the only good thing to come from her death is that their child will never have to live its life as a Mongrel: part Hominid, part human, and potentially burdened with his own, vile curse of Power.

Contemporary Aftermath and the Sorrow of Countess Moreau


It is no secret that Saeric audience love a good morality play. The more favourable portrayal of Hominids, Beasts and Mongrels are of creatures incapable of logic, intelligence or morality; at worst, they are depicted as evil servants of the Raven. A romantic morality play about a romance between a mortal woman and a Hominid was not unique; however, there was another reason the play became so popular in Lormont. Naturally, scandal, intrigue and jealous lovers made audiences all over the country desperate to see the play for themselves.   Despite writing the play for to be performed at the wedding feast of Lady Mélodie Thevenet to Count Olivier Moreau, letters and legal documents from the capital of Cazilhac show that Moreau sued Lucrèce Azaïs for breech of contract. It would seem that the Count had comissioned the play for his wife, and had read several drafts prior to giving the playwrite permission to hire actors for the performance. The play that they were met with on their wedding day was drastically different to the one Moreau had supervised.   Mélodie Thevenet was a descendant of one of the most famous Illusionist bloodlines. Her family had served House Créquy since 23 SGC, when Zacharie Thévenet was gifted to Roi Larrecin. This Star-Chosen Roi had been murdered by his own brother and his ownIllusionist Absolom Levett. The Usurper was subsequently overthrown by an invading Raskvaerii army. One of the punishments he received was a stay of execution, just long enough so that he could watch his daughter be forced to wed the reluctant Illusionist. Unlike the storyline of the play, the marriage between Thévenet and his wife was a happy one. Of their five children, only three exhibited the same Illusionary Power as their father. Countess Mélodie had not inherited her grandsire's Power; had she done so, her marriage to Count Moreau would never have been allowed, as she would have reverted to the possession of the Créquy royal family at birth.   It is said that when the bride-groom rose to his feet, shouting at the players to leave the stage, the Countess had calmly poured him a glass of wine and asked him to return to his seat. Apart from that 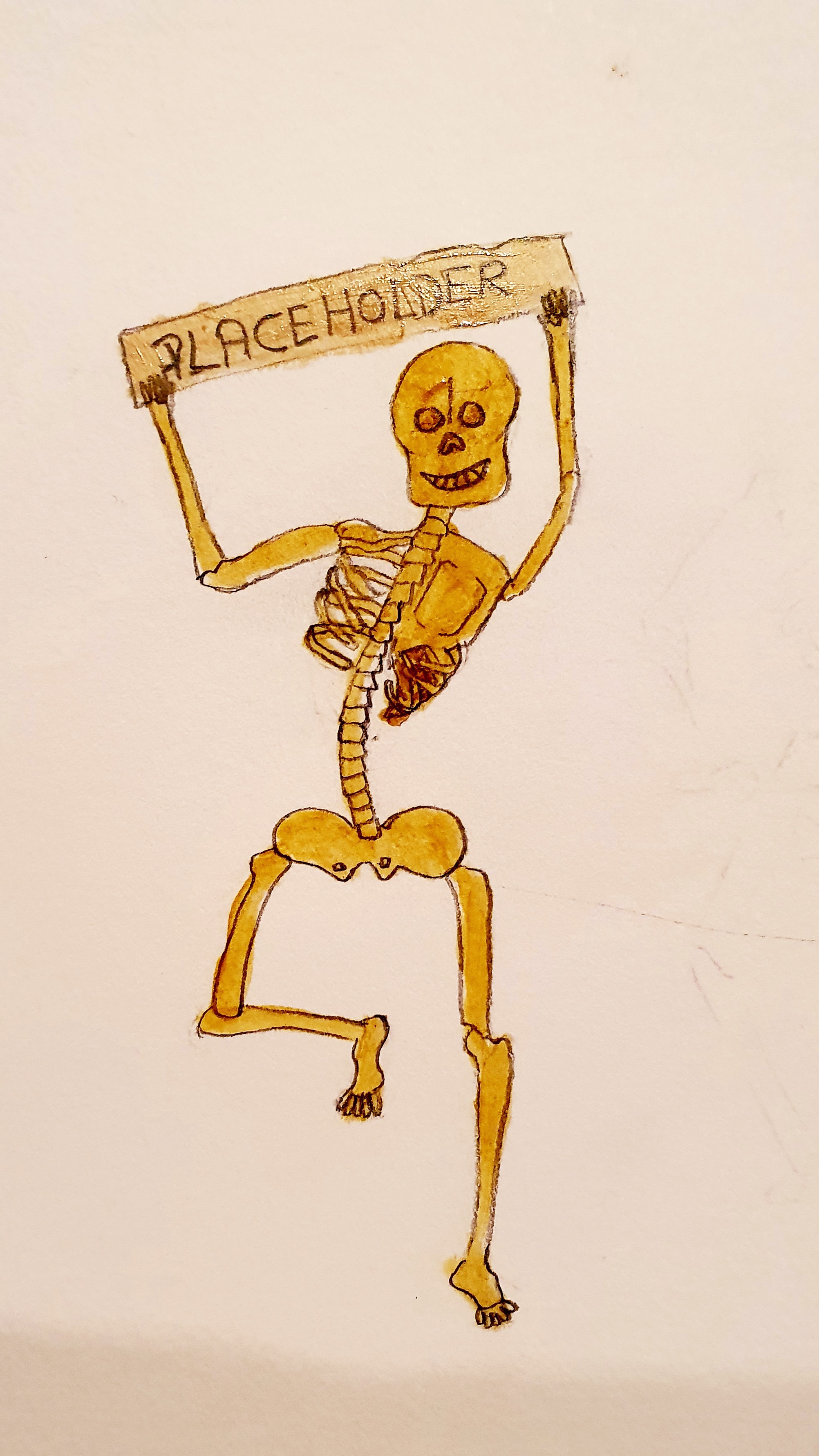 Placeholder Skeleton by Caitlin Phillips
single moment, the bride watched the play in silence. Some witnesses claim to have seen tears on her cheeks during the Illusionist's monologues while others say her face remained in passive. All agree that she never took her eyes from the stage. When the actors had finished taking their bows, the Countess commended them on their performance, and gifted the woman who played the Star-Chosen Daughter a flower from her own table.   Popularity in the play resurfaced some three years later, when Lucrèce Azaïs made a scandalous revelation in a letter to the court. In it, she disclosed the name of the sponsor who had payed her to change her original play. This sponsor turned out to be Lady Rohesia Poquelin, who had previously been engaged to Count Moreau. The reason for their split was never publically diclosed by the Count, not even following Azaïs's announcement. It is assumed that Lady Rohesia acted out of jealousy and spite. The alterations she had made to the play were purposefully inteded to shame the new Countess, whom she saw as having stolen her rightful place as Moreau's wife. The pointed nature of Levett's monologue's are given much more savage meaning when read in this light.

The names of Zacharie Thévenet's wife and traitorous father-in-law have formally been lost to history. Their names were removed from the family tree in The Chronicle of the Star-Chosen Roi, and all mention of their names replaced with Madame Thévenet or the Usurper. It is unceraint whether the modern Thévenet have preserved their names in secret, as this would go against the wishes of the long-dead Roi Bayard.
In response to the prompt The ultimate love story - Romeo and Juliet, Venus and Adonis, kanye and Kim....
The Sorrow of Souls Quartet © Caitlin Phillips 2020
Images © Caitlin Phillips, unless otherwise stated
Default cover image by Michael Schaffler at Unsplash

Awww what a beautifully sad love story. I like the outside story of it too.