Settled at the mouth of the river Zūpēa, it was one of the first cities constructed by the Dānāofar people on the coast after the great migration south. It has mostly replaced the older native city with the old inhabitants being pushed further inland as Cūengfēdr al Cuwtōhw kept up with its southern expansion. The city was only founded 30 years prior, 0 years after the great migration began but almost the second century after the Dānāofari began to count their history.

The large walled city in located at the mouth of the river Zūpēa, far to its south, East and West the lands the Dānāofari now call theirs is blocked off by large mountain ranges.

The city is divided into 2 halves by the mighty river, with there being large shipbuilding facilities at the mouth of the river on both sides. Having experienced rapid growth following the invasion the houses and shops that made up the city had sprawled out over the flat lands. After a savage attack by the barbaric nomads that had once called the land home a vast series off walls would be built up, only allowing entrance through a few select points. Once the walls had been built many new developments have seen the density of the city increase as land inside the walls becomes more and more scarce. But as the threat of a native attack becomes less and less more people are choosing to start a life outside the mighty walls of the city.

The large docks and port facilities of the city allowing it to have excellent connections to cities inland like Humztat al Cuwlokh and further south down the rivers. The goods from these lands can flow out of the port to coastal cities where they get exchanged at the vast markets of the city. Fish, stone and metals from coastal cities like Pegalhwing also end up here and the money paid to moor up ships, taxation of traders and income from the myriad of businesses that aid the industry have made the city the wealthiest in the region by far.   Other industries in the city include the vast series of ship builders to upkeep the vast merchant and military navy that allows for the safe flow of goods across the region. Metal workers build weapons and armour for the military also make up a large part of the secondary industries of the city.

Ztuuz Tunaz was founded in the year 212 using the Dānāofari calendar (996 A.S), but the cities foundations have existed for much longer as small camps for the nativies of the land. Once the city was re-founded by Cūeng Tēcwvif at the mouth of shores of the river, saying the lands has been freed from the yoke of the local false gods by Cuwlokh. Many of the old buildings where torn down and replaced with more traditional thatch housing. Quickly as it grew these would in turn be replaced with stone houses, and at present it consists of a bit of a mix of both construction types.   The royal palace is one of the largest buildings of the city, once dominating the skyline as the city slowly built up it became less prominent over time.

Attack of the Savages

The great attack of the savage Llennarc people took place in the summer of 218 (1000 A.S) and would see massive parts of the city burnt or destroyed before the nomadic chariot warriors where pushed back south by a secondary force from the coast. This would see an end with co-operation with Llennarc as the Dānāofari would begin to kill and enslave any native that was saw inside the kingdom. The cities mighty walls would begin construction in the same year, and would stand for many years to come.
The World Atlas
Open full size
An atlas of the world, produced by the scholars of Breidhem. 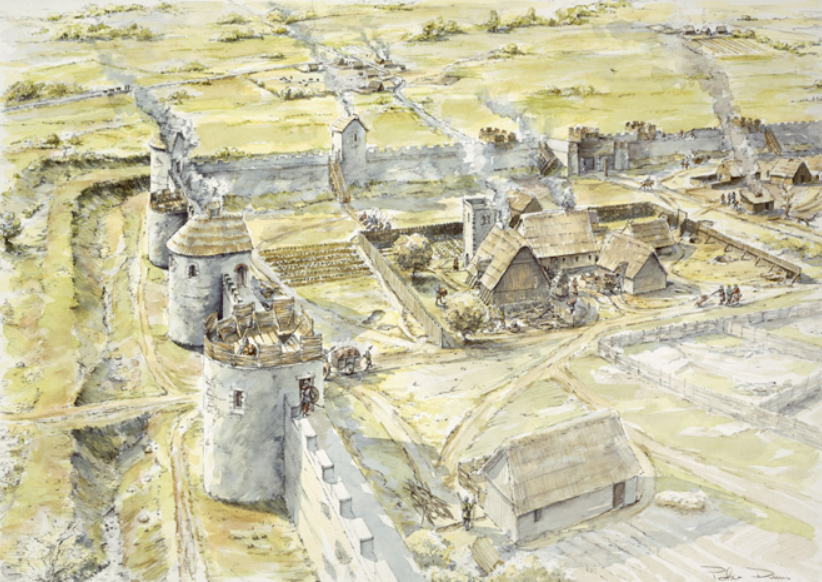