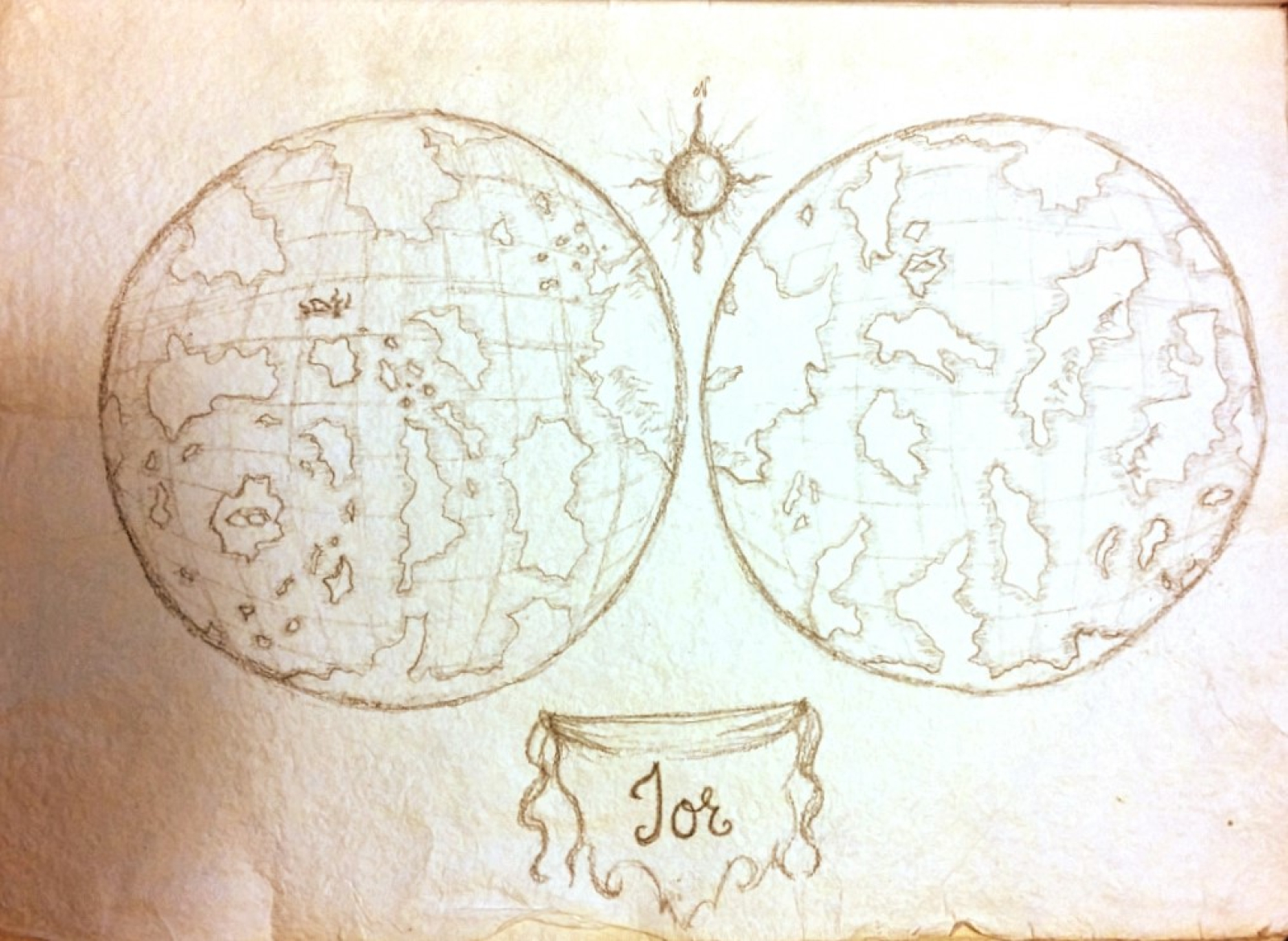 Eons of destruction and reforging. Civilizations have risen and fallen, and rose again. Gods have waged terrible war. Through it all, Ior has endured.     In the beginning, there was darkness and the Titan. In this time the world of Ior had no name and was naught but ash, and shadow, and the dull luminescence of churning magma. The Titan oversaw this world for it was his.   After an incalculable time, the elements of earth, rock, and lava took form, coalescing into something that resembled life. These elemental creatures of primitive intelligence helped to shape the world, forming mountains and canyons, coastlines and continents. All this, under the omnipresent eye of the Titan, was the ordered chaos of the primal age of Ior.   Then followed the age of the Light. Eanna ignited the sun, flooding the Titan's world with warmth and light. The gods filled the world with flora and fauna, shaping Ior to their liking, never knowing it had already been claimed. They created the mortal races, elves, dwarves, humans, and more, who further sculpted the planet to suit their needs. Life flourished in the light, but in the darkness the Titan watched, gathering his rage to smite the trespassers.   The War of the Titan was a time of great upheaval; not only for the gods and their creatures but for the planet itself. So immense were the powers of gods and Titan alike, that they tore at the very seams of the earth. Ley lines overloaded with magic cracked and erupted. Ancient elementals, woken from their slumber, shattered mountains and drained seas. Cities were swallowed whole, never to be seen again. When the dust settled, Ior was irrevocably changed.   Now, Ior is a world filled with lost ruins and forgotten magicks. Mortals, brought to the brink of extinction in the Titan War, have rebuilt and moved on. Yet the scars of that conflict are all too visible.

The lands and oceans of Ior have shifted much over the eras. In the current era, the planet consists mainly of vast oceans and seas surrounding islands of all shapes and sizes. The largest landmasses are many thousands of miles across, while the smallest are mere meters wide.   The cataclysmic event known as the Fall caused a massive and rapid shift of the continents over a thousand years ago. The lands around the focal point, the Great Seat, were violently forced away. This resulted in a ring-like pattern of islands moving away from that island, like ripples of water. The smallest and most shattered land masses are mainly clustered around the Great Seat, while the largest continent lies on the opposite side of the planet, the result of multiple islands being pushed together. Because of this shift, there are places where the geography does not follow a logical pattern. Some mountain ranges may suddenly end in jagged chasms, rivers flow in the wrong direction, or strange rock formations materialize from constantly flowing magma vents.   The thirteen main continents occupy many varied biomes. There are dry, arid deserts, and cold deserts. Soaring mountains and low salt plains. Vast canyons and dense, overgrown forests. Life of all sorts can be found almost anywhere and is as varied as the environments in which it thrives.   The most barren location, however, is the Great Seat. An enormous, shining, black rock that juts from the surrounding ashen plains. The lands around this rock are scattered with the bleached bones of those unfortunate souls who fought in the Titan War. The lower face of the Seat is seared with the white handprints of the mortals who were obliterated in their attempts to fill the rock with enough energy to defeat the Titan. It is a memorial which no living creature has set foot upon in a thousand years. It can be seen, however, in the distance from the shores of nearby islands.

Life on Ior comes in many and varied forms. Oceans, forests, and mountains teem with life. Much of that life was created or guided by the gods, but there are many other things which evolved naturally over time.   Several intelligent species live on Ior, some beautiful, some monstrous. After the Fall, much of this life was forced to the brink of extinction, but after many centuries, they've bounced back. 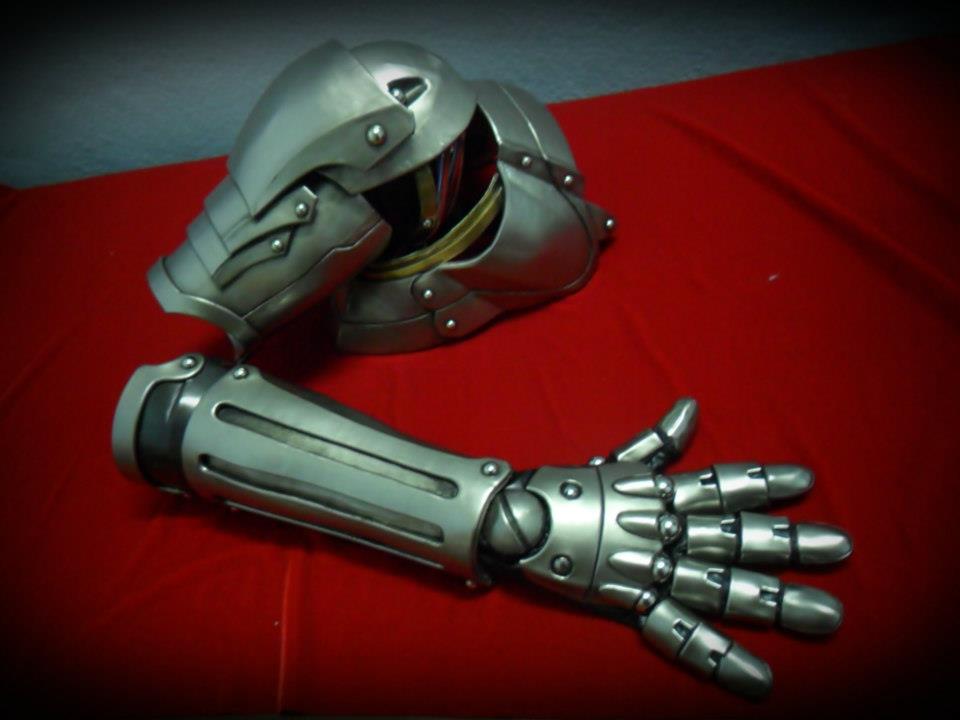 Love how this whole thing sounds like a myth or a story that someone would tell around a campfire :D

Thank you! ^_^ That was definitely the intent, so I'm glad it worked out! lol

Your article has a very epic feel to it! I love your descriptions of both the world forming and the various descriptions you have for the different geographic locations. I would, however, have liked for you to go into a bit more detail in describing the different biomes. It's one thing to say an area is a dry, arid desert, its an entirely different thing to be told how vast the desert is and how oppressively hot it can get during the day and bone-chilling cold at night.

Thank you very much! It is very much a work in progress, so I will be filling that out soon. Trying to work on that and the other prompts at the same time, so it's slow going. But! It is going lol.

Absolutely fantastic cover illustration! I'd love to see more links to other articles later so it's easy to explore your world further :D great job!

Why thank you! I intend to paint the map at some point, but probably not for several weeks. It's on very fancy watercolor paper, so I kind of feel obligated to paint it. I'm slowly writing individual articles for each location, so it will be filled out soon... ish ^^;