From Sea and Shadow


It has been more than two hundred moons since the crimson-robed came to our island. They came in a battered state, but impressive nonetheless. We promised to loan them a part of Sali if they helped us defeat our enemies... now on this land a beautiful city sprawls.
— Chronicler of the Xi, on the Ironfoot

The fishing town of Overlea is situated on the eastern shores of Sali, the largest island in the Cilusian Isles. Known as Vide'seb, or "newcomer-town" by the native inhabitants, the town is the result of the Northern Survey, the first serious attempt at colonization by a newly-united Ironfoot Isles.
Table of Contents – Expand
Table of Contents

In the 16th year after the unification of the Ironfoot Isles (16 A.U.), the Empress Regnant, Sara Aban, undertook a campaign to decrease the power of the Federation's military. After the conclusion of a 403-year civil war, Sara's officers were more of a liability than an asset, more prone to assassinate her than her enemies. She redirected much of the military to more peaceful projects. As part of this initiative, Sara began to sponsor several voyages of exploration outside of her empire.   While Ironfoot had an excellent navy, it was mostly held back by thousands of steel spires scattered throughout the Seas of Steel. Sara began to tackle these within the first decade of her reign. After the Federation-sponsored operation Red Bronze, these spires became less of a threat due to newly tested safety protocols on voyages. Shortly thereafter, the Northern Survey was launched, to assess the waters due north of Ironfoot.

Given we had to sail through a freak storm, I'd say we were lucky to make it at all.
— Captain Adamsen

Led by Captain Sylvia Adamsen, a veteran of Red Bronze, a squadron of five ships journeyed north of the mainland, setting out in the 17th year after unification. However, their mission was a difficult one: after their squadron escort dropped back, they would have to fend for themselves against spires, storms, and dangerous sea monsters.   After ten days at sea, a powerful storm descended on the crew. Captain Adamsen battened down the hatches and attempted to navigate clear of the Spires. However, these efforts were in vain: even after tacking hard to starboard, the squadron sailed directly into a hurricane. When the storm finally cleared, only 102 men were alive. One ship had sunk on a spire, and the rest had sustained serious damage.   Thankfully, just three days after the storm hit, the crew landed in the Cilusian Isles. Similar to Ironfoot, these islands were also isolated by spire fields in the ocean. After landing, the elite troopers were brought to the court of the current sovereign. By the purest chance, the sovereign had in his employ a political exile from the Ironfoot Isles, who recognized the flags of the fleet.

And, provided the peoples of Vide'seb gift five hundred rolls of silk, three hundred thousand grains of rice, and ten percent of their catch in fish to the sovereign of Sali yearly, they are entitled to the land that is Overlea.
— Imperial Decree 1297

Captain Adamsen hadn't expected the area to actually have a developed civilization in it. He had expected to claim the land for his own, not to come before a foreign sovereign. However, he negotiated with the sovereign, eventually earning a lease for an area of land in the heavily forested northeast region of Sali, with the understanding that the lease would be paid through tribute yearly, and that additional land could be earned through collaboration with the king.

The Island Exchange (also known as the Sylvian Exchange) was an exchange of beliefs, philosophies, and goods that occurred between the two islands. Some of the most important items that were exchanged are listed below.

However, there were a few negative consequences from this exchange. First of all, Ironfoot was rich in silver, which was used as currency in Sali due to its rarity. As a gift of gratitude, the Empress gave large amounts of silver to the peoples of the Cilusians, throughout the isles. This had the unfortunate consequence of causing a crash in the value of silver. Eventually, the king gave back most of the silver in exchange for silk to stem the recession.   Second, and more importantly, the Ironfoot Isles had a strong system of public sanitation, while the Cilusians Isles did not. Even in the capital of Sali, the sewers ran directly along the edges of the streets in deep ditches, causing a perfect environment for the evolution of disease. Thankfully, few powerful diseases were transmitted back to Ironfoot, the most prevalent being viral fevers that caused several "plagues" after the first contact.

After fifty years, the sleepy hamlet of Overlea has grown to a sizeable town. The harbor contains the pride of the Federation fleet, while the colony itself serves as the command center for an empire stretching thousands of leagues.

In the present day, the colony is celebrating its fifty-fifth anniversary. Its size has quadrupled from the original land grant due to the Federation helping the Kingdom of Sali take over all of the Cilusian Isles, while the tribute tax has been halved. This has led to the forging of the Island Alliance: a geopolitical mutual-defense treaty between the two island nations. However, it will later lead to a dark chapter of Ironfoot history: the alliance's attack on Valemar and the beginning of a colonial era. 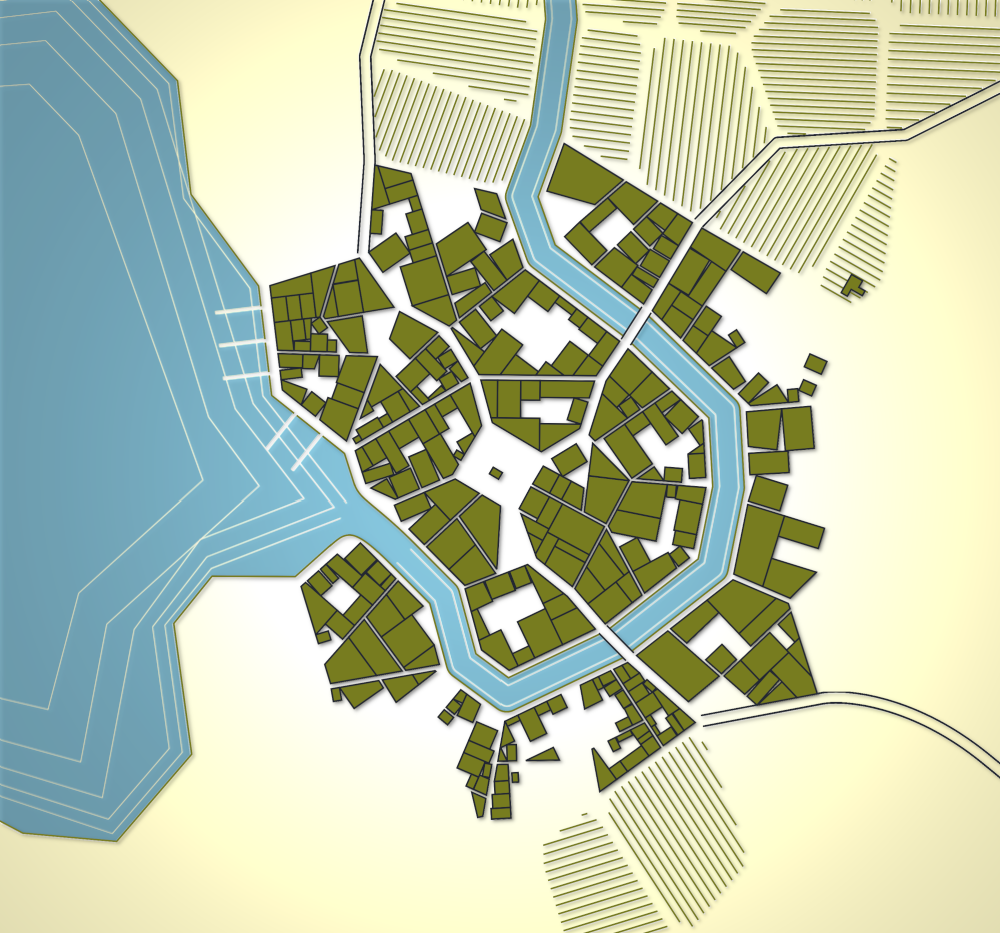 One of the most illustrious flagships of any nation

One of the most influential royal houses of the Seas of Steel. It controls the Federation.

As a forward command center for the Federation, Overlea proved to be well worth the cost.

In the present day, the colony of Overlea is of great worth to the Federation. A seafaring people, they have found several more island groups towards the north of Overlea, which they have claimed as their own. Few avenues of trade through open sea are not controlled by the Alliance.   In the Cilusians, the Sali-Federation alliance has proved unbreakable. This has helped more than once when troops from the continent of Valemar have attempted to invade the Cilusians or Ironfoot Isles. As a team, the Island Alliance is now eagerly eyeing a massive chunk of the mainland ripe for invasion.
Uneven Benefits


As a colony, Overlea has no representation in the Federation. However, they still pay taxes and economically support the Federation, and still are governed by their laws. If not for their partial autonomy and the Federation's strong military, the colony would be much less loyal to Federation rule.


The Kingdom of Sali takes only nominal tribute from Overlea, and in many ways Overlea is treated better by the foreign nation than by their own Federation. They recieve one non-voting envoy to the King of Sali.

I want to say that was a great article to read, Love the details you added!. It drew me in by explaining how it was founded and other details. So once again a great article!

Your word counter is off by about 200 words. Disqualified. :)   But seriously, I absolutely loved the read. You did a fantastic job describing the history of how the settlement came to be. I especially enjoyed the prologue, which helped set up the events in my head and made envisioning the perilous adventure much easier.   You have been the only one to use the relationship feature so far, so cheers on that one. I also haven't seen many actually listing out the trading possibilities between the two nations.   I also find it curious that this colony is treated better by the Sali than their are their own federation. It makes me wonder if there is any thoughts of the colony defecting to Sali? It sounds like there is already a future of bloodshed between the two in the future.   Well done again!

Uhhhh... yeah some false advertising on my part. It is quite interesting the relationship between Sali and the Federation. They're about to go on a colony spree much like Spain vs. Portugal. Who gets what colonies are anyone's guess.

Also I kinda cheated... the relationship feature doesn't exist on settlements, hence why other people didn't use it. I wrote some BBCode and CSS effects that made up for it.

All this good stuff.

Hey! This article is up for consideration to be featured, however, we have a new rule that all images need to be credited for an article to be featured. Do you think that you can credit the header and the map? :3 https://www.worldanvil.com/w/WorldAnvilCodex/a/images

Hi, love! We Enchanters would love to feature this article! Unfortunately it appears you've neglected to credit your cover image artist. If you could, we'd love to have you credit them so we can show your article off to the lovely users in our community!   For more information about our feature requirements, please see our codex entry: