The Sealed Kingdoms    World Atlas    Arctopelago System      Upper Late Arcopel
The arcopel once constituted a hyper-advanced space-faring empire that absolutely dominated the Sealed Kingdoms Region and surrounding space. Before the Mind Cataclysm brought their civilization tumbling down at the end of the Mythic Age, these arcopel, scattered and morally decadent as they had become, also raised numerous species into sentience and diversified them across countless worlds, creating the Sealed Kindoms as they are known in the modern era. This late, diffuse culture of arcopel are often known as the Arcopel of the Mythic Age - or, more simply, as the Upper Late Arcopel.

The unified arcopel langauge had largely subsumed all previous region-specific dialects by the early Mythic Age. However, the vast separation that had developed between settlements and individuals during the era of the Upper Late Arcopel meant that even this language became 'dead' in the sense that no major linguistic innovations could be reliably propagated; the only sure way to verbally communicate was to resort to the old, rigid rudiments of the empire-spanning lingua franca. By the end of the upper Late Arcopel culture, most communications between individuals took the form of direct data and sense-impression transfers between cybernetic brain-computer interfaces, rendering verbal communication antiquated in comparison.

While most Upper Late Arcopel were haughty and unconcerned with ethics, it would be incorrect to say that the arcopel were unanimous in this attitude or entirely without moral scruples. Though many Upper Late Arcopel did regard non-arcopel as little more than animals of various degrees of cleverness, a sizeable contingent of the culture did believe in what they would have called 'animal welfare,' regarding the unneccessary infliction of suffering on a sensate, organic being as morally untoward. Many Upper Late Arcopel were strident proponents of scientific objectivity, detatchment, and non-interference to the extent possible with captive non-arcopel on research worlds, allowing less-developed species to grow under covert observation rather than directly intervening in their affairs.   Some Upper Late Arcopel even went so far as to question the ethics of creating and keeping skyphoform servitors, as they deemed them capable of suffering in the same way as organic beings, but this was a minority opinion by the time of the Mind Cataclysm. Lufthaus, a researcher at the Telfegor Robotics Foundry and the creator of the skyphoforms (see Attained Technological Levels) himself came around to this point of view only in his final years leading up to the Cataclysm, allowing a skyphoform made in his own image to go on to become the progenitor of the splinter Defected lineage. 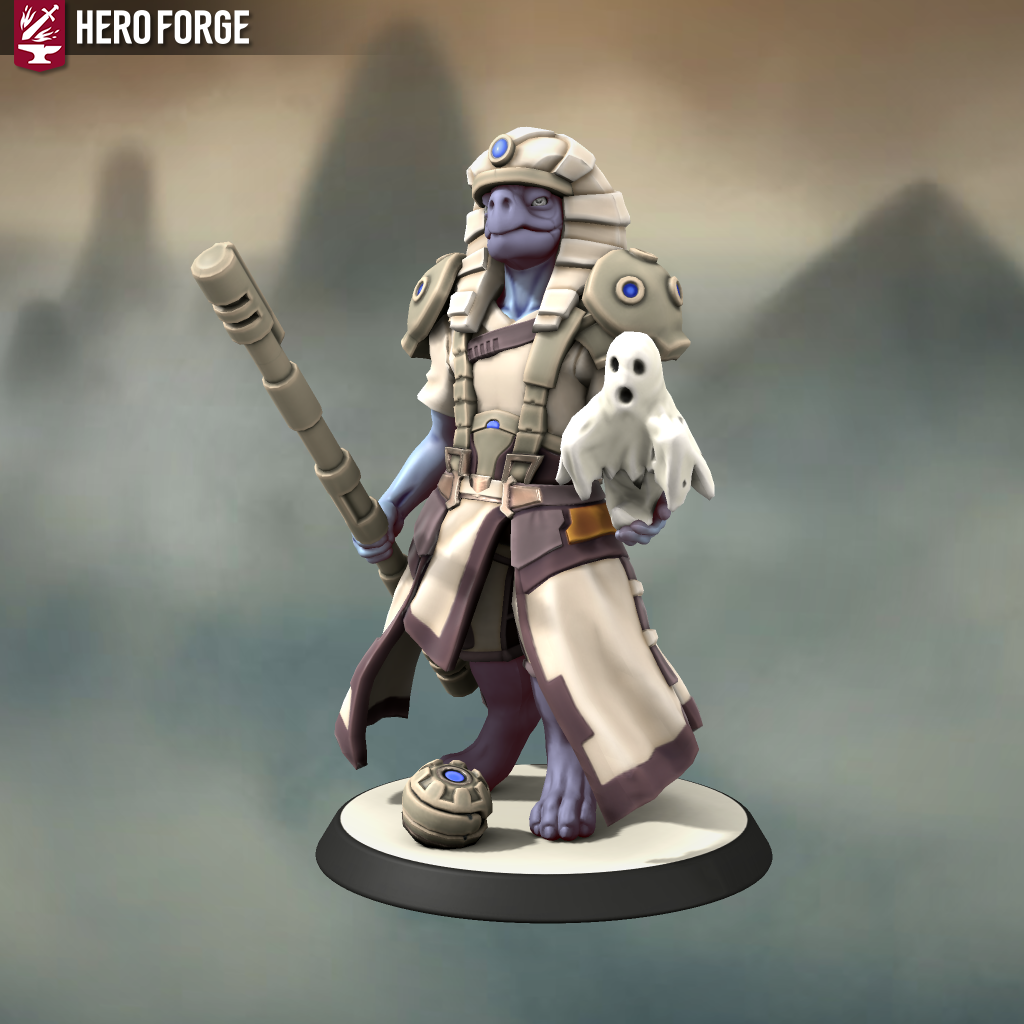 by Hero Forge
The Upper Late Arcopel possessed technological and scientific sophistication that remained unparralleled even unto the development of Wurth Harkin's matrioshka brain and some of the greater feats of Vbyifabid stellar engineering.   The Upper Late Arcopel were masters of long-distance interstellar travel, crossing the vast gulfs between stars at high relativistic speed in cryosleep with near-zero probability of Cryostasis Recovery Syndrome or, in some cases, as the result of engineered biological immortality. Their artificial intelligence was among the most advanced in the setting, with their skyphoform servitors going on to establish their own independent civilizations after the collapse of the arcopel interstellar empire. The Upper Late Arcopel would gather sample species from across tens of thousands of lightyears of space and place them on marginally habitable worlds in the Sealed Kingdoms region as a form of captive zoology, instituting various flavors of gene drive to mark their finds and differentially hasten the development of certain useful traits in these hapless creatures. In this way the Upper Late Arcopel are directly responsible for the rise of the Cobalt Protectorate and its various humanoid subgroups, the develoment of emoxi and ashquilish as offshoot species, and the regional specialization of the vbyifabid.   Much of what the arcopel knew and made is lost in the modern era. The Mind Cataclysm was an act of information warfare on the part of a small colony of arcopel back on Arctopelago who wished to establish a collective mind for the arcopel as a whole - akin to the vbyifabid flockmind - with themselves as the dominant 'thought-leaders.' Instead, due to misjudgements on the part of the attackers, most arcopel with brain-computer interfaces or whom were uploaded consciousness - in other words, most arcopel in existence at the time - were driven insane, crippled, or killed outright by the attack. Those unfortunate souls left alive in the wake of the Cataclysm were left scattered and disconnected from one another across gulfs of space, isolated from their culture's extensive knowledge base. The few remaining group settlements of the arcopel collapsed into anarchy and disrepair, becoming deathtraps for the salvagers, archaeologists, and other opportunists who would risk the journey.

The traditional arts of the arcopel as a species had become stagnant by the time of the Upper Late Arcopel. It was widely accepted by the culture that there was nothing new to be done with traditional visual, musical, or sculptural forms, as arcopel culture had been already ancient by the time that other species were just learning to use tools. Instead, most Upper Late Arcopel sought to incorporate aesthetic work into their scientific and industrial work. Miniaturization and optimization meant that arcopel ship design, for example, could finally embrace ideals of form beyond rude practicality. Some arcopel regarded the engineering of living systems towards specific traits (see Attained Technological Levels) as a form of art that had the benefit of dynamism and self-propetuation; the grotesque, hyper-optimized forms of some now-extinct ofshoots of early humanity demonstrate the unethical excesses to which this 'aesthetic' was pushed before the end of the Upper Late Arcopel Culture.

The Upper Late Arcopel were masters of genetics and cybernetics, allowing them to achieve whatever standards of beauty they set for themselves. At the same time, as many of the Upper Late Arcopel were scattered across 10,000 light years of space as individuals or small groups, they had little in the way of input from one another by which they could establish unique cultural aesthetics. Instead, efforts were made by most of these arcopel to strive towards a half-remembered 'prime arcopel ideal' which emphasized physical strength, intellectual growth, and a return to a general physical form that resembled what arcopel looked like before their technology. The effect of these efforts was that most arcopel began to look like museum replicas of pre-spaceflight arcopel with all the major self-alterations concealed beneath this uniform exterior. Flaunting luddite suppositions, an arcopel with no visible physical enhancements was more to be feared than any ultra-muscled collage of sinew and cybernetics, as the latter had merely embodied the practical ideals of Upper Late Arcopel society while the former had the wealth, knowledge, and resources to perfect them.

The Upper Late Arcopel had little in the way of gender ideals. While arcopel possessed male and female sexes, their gender dimorphism was very slight, and individual self-improvements were believed to impart more of an identity than any gendered predispositions. Indeed, as the automation (see Relationship Ideals) and self-alteration (see Beauty Ideals) technologies of the arcopel advanced, contact between the sexes became altogether less necessary for the continued propagation of the species and, as such, most old gender ideals had faded into obscurity by the time of the Mind Cataclysm. 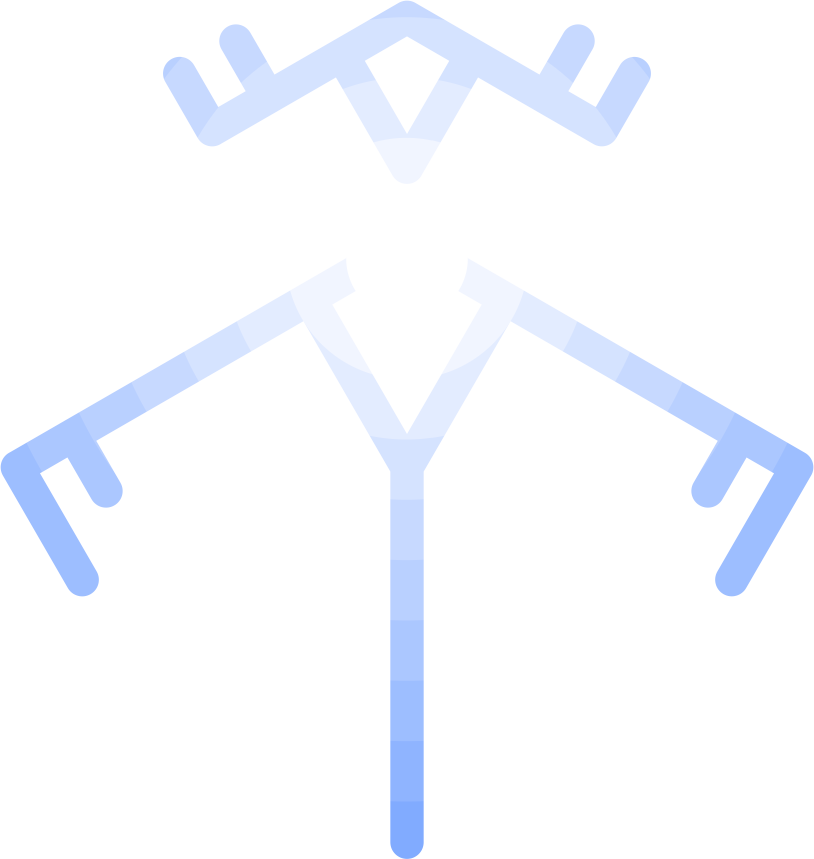 Skyphoform Ideogram by BCGR_Wurth
The more advanced the Upper Late Arcopel became, the more likely they became to choose lives of solitude. The advanced exploration vessels of the era were so packed with in-situ resource utilization systems that they could be self-sufficient nearly indefinitely. Armies of the artificial life-forms known as skyphoforms attended to the every need - no matter how excessive or twisted - of their arcopel masters, providing sustenance, labor, entertainment, and pleasure without that baggage that came with in-person interactions with other organic beings. Among the very last of the Upper Late Arcopel, it became common for an arcopel to never see one of his or her kind in-the-flesh, with individuals born in artificial wombs, reared by the skyphoforms of their now-deceased forebearers, living in the vast gaps between stars, and often retreating into endless cryostasis when their bodies ultimately failed them - only for the cycle to continue with genes harvested from their ice-glazede catafalques. Even more social Upper Late Arcopel held individualistic capability and accomplishment to be the greatest of virtues.   Those Upper Late Arcopel who chose to live with others of their kind often did so in various small communities spread across their homeworld of Arctopelago or, more commonly, in orbital habitats around various stars held by their widespread interstellar empire. These bands of arcopel related to one another in a way that a human might recognize as a 'small town culture.' Outside groups were held at arm's distance, but not outright rejected; non-arcopel, however, were regarded as animals at best and never graced with such social warmth except as a means to an end. One notable exception to this was the ashquilish, whom the arcopel had bred from early chitiquish stock in eons past to serve various roles in arcopel society before the creation of the skyphoforms. Ashquilish came to be regarded as lesser members of the arcopel 'family' - something akin to pets - and were accorded a degree of respect by the arcopel that no other species ever attained.

This was a overall a good article!, I liked the timeline for it as well!

This was good stuff and I like the timeline and how it's placed! One thing, though, ... perhaps one section on their LEGACY that collects all the bits into a summary?

I like the examination of max time of a culture.