Roadbuilding is generally the purview of great empires: infrastructure to maintain their grip on far flung provinces. 1 Up and down the Ryopytav mountains, most adjacent political powers have viewed the mountains as a natural defense, made even more formidable by the absence of any decent roads. A few passes connect the east and the west slopes, but the approaches to these passes have proved too steep and treacherous for wheeled vehicles. 2

For most of modern history, passes like Snow Squall (west of Grytack on the Triboar trail), were utilized only for personal travel. 3 99% of commercial traffic east or west bound went by water; From Neverwinter and Si'aqal, northwest to the ocean via the Dagger Inlet, south along the coast to Waterdeep and then East, up the navigable stretches of the Miskafiska River. Roughly fifty years ago, this changed abruptly - a swarm of Kraken took up residence in the Dagger Inlet, making it completely inaccessible for commercial traffic.

A few years after the arrival of the Kraken, when it was clear that they had no intention of leaving any time soon, an enterprising group of adventurers enticed Llama caravan operators to begin operations through the passes in the mountains. The hardy llamas and their fierce handlers proved to be extremely well adapted to handling the extremes of the mountains, and the dangerous inhabitants who menace travelers along the way. 4And so, the Cloud Kingdom Llama Caravans (LCs) became the dominate mode of transporting goods and people east and west through the Ryopytav mountains.

The smallest unit of a LC is an "ace": six llamas and two handlers. The ace will stick together throughout their whole career, beginning and retiring as one unit. An ace can transport up to 400 pounds of cargo, depending on the bulk. Aces gather and operate together if the freight demand is high enough. Six aces comprise a "constellation" or "cluster"5 Constellations are the most efficient grouping of aces, moving the maximum amount of goods, up to 2400 pounds, with the least danger of congestion or damage to the trail.6

Llamas set a decent pace on the trails, in optimal conditions making 16 miles a day. The trip through the Triboar pass, for example, generally takes an ace 9 days to travel from Vantage to Neverwinter. 7Operations depend on conditions in the individual passes, but generally start up a few weeks after the spring equinox and conclude before Samhain.

For all your transport needs!

Cloud Kingdom caravansaries can be hired at any of the cities that comprise the major trade hubs for the areas near the mountain passes. The Kingdom maintains government warehouses where merchants can deliver and pick up shipments. Warehouse staff combine shipments to match but not exceed the capacity of an ace. The handlers of each ace are responsible for arranging the packs and balancing their llamas' load. 8 At the other end of the run, the aces deliver their loads to a receiving warehouse, where the individual shipments are sorted and readied for pickup. As you might imagine, there is a ton of paperwork generated to track and document all the shipments that pass through the warehouses.

Cargo isn't the only transport concern served by the llama caravans. Travelers often pay a modest sum to accompany a caravan. As long as the caravan is not a complete constellation, walkers are welcome to purchase a right to accompany. For those with extra coin, you can even hire an ace to carry baggage as well. While you can't ride a llama, you can have a very comfortable camp with an ace carrying all your gear! 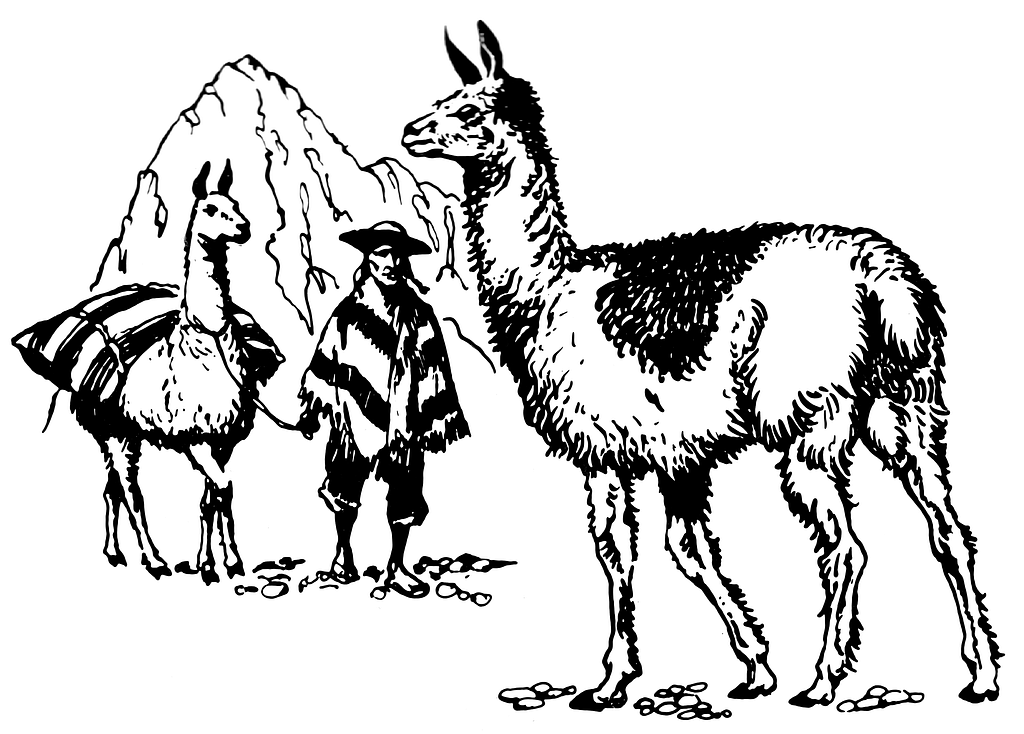 by Archives of Pearson Scott Foresman, donated to the Wikimedia Foundation
Origin of expression, "It's an ace short of a cluster." Meaning:
Owning Organization
The Cloud Kingdom
Current location
Ryopytav Mountains
Complement / Crew
One "Ace" is comprised of 6 llamas and 2 humanoid handelers
Cargo & Passenger Capacity
75 lbs per llama, depending on bulk