All to The People

Originally a Hobgoblin war camp known as 'Camp Black Tooth' as well as the birthplace of Mizzlinn Puk Skarmot is known by many as a lawless, lordless den of thieves, goblins, and other less socially conforming individuals. Upon gaining its liberation in the Age of Ascension the former Black Tooth slaves who banded together to not only overthrow their oppressors to gain their freedom, but in turn stood defiant against the desperate settlements south of Starmourn Lake who sought to claim the Golden Foothills as their own once the perceived threat of the Black Tooth Clan was dealt with. Rather than scattering to the winds upon gaining their freedom the Goblins, Gnolls, Orcish, and Human coalition were instead galvanized by the fires of their oppressors and forged a community within the Golden Foothills that would henceforth be known as the free city of Skargmot. Given the population of Skargmot is primarily Goblinoid the cultural and legal structures held in Skargmot reflect this on a scale unlike any other in the history of Lorian. As such coin such as copper, silver, and gold has no more worth than the use of the metal they are made of. Trade in goods, favors, or otherwise is all that carries weight in Skargmot. However most alarmingly of all 'ownership' seems to mean little in the City of Goblins to the extent that it is not uncommon the traveling merchants to avoid the Golden Foothills all together lest they be relieves of every items they do not conceivably 'need'.    Perhaps unsurprisingly the majority of the outside world keeps their dealings with the City of Skargmot to a minimum. Given the city's lack of currency in anything but goods for trade one might assume Skargmot suffers from a stagnant economy. However this is not the case due to the rolling hills of farmland that surround the city who are able to take advantage of Skargmot's unique outlook on trade and wealth. This in turn has strengthened the bonds of the local populous who have grown to fully embrace this life of trade over the past several generations since the city's founding. One's wealth in Skargmot is not determined by coin, nor by the items or equipment you carry. The only true wealth in the eyes of the citizens of Skargmot is the web of favors, trust, and connections you weave throughout your life. Because of this Skargmot lacks a ruling class instead holding a city wide vote every five years to fill crucial roles within the city.    To the outside world Skargmot is seen as a lawless den of chaos and dangerous ideals rife with treachery and dubious intent. While to those who call Skarkmot and the land around the city home it is true freedom from the bods of servitude. While it is impossible to know for sure which perspective it more correct it is most definitely a topic for frequent and regular debate amongst the ruling forces in the South-Western region of Lorian. 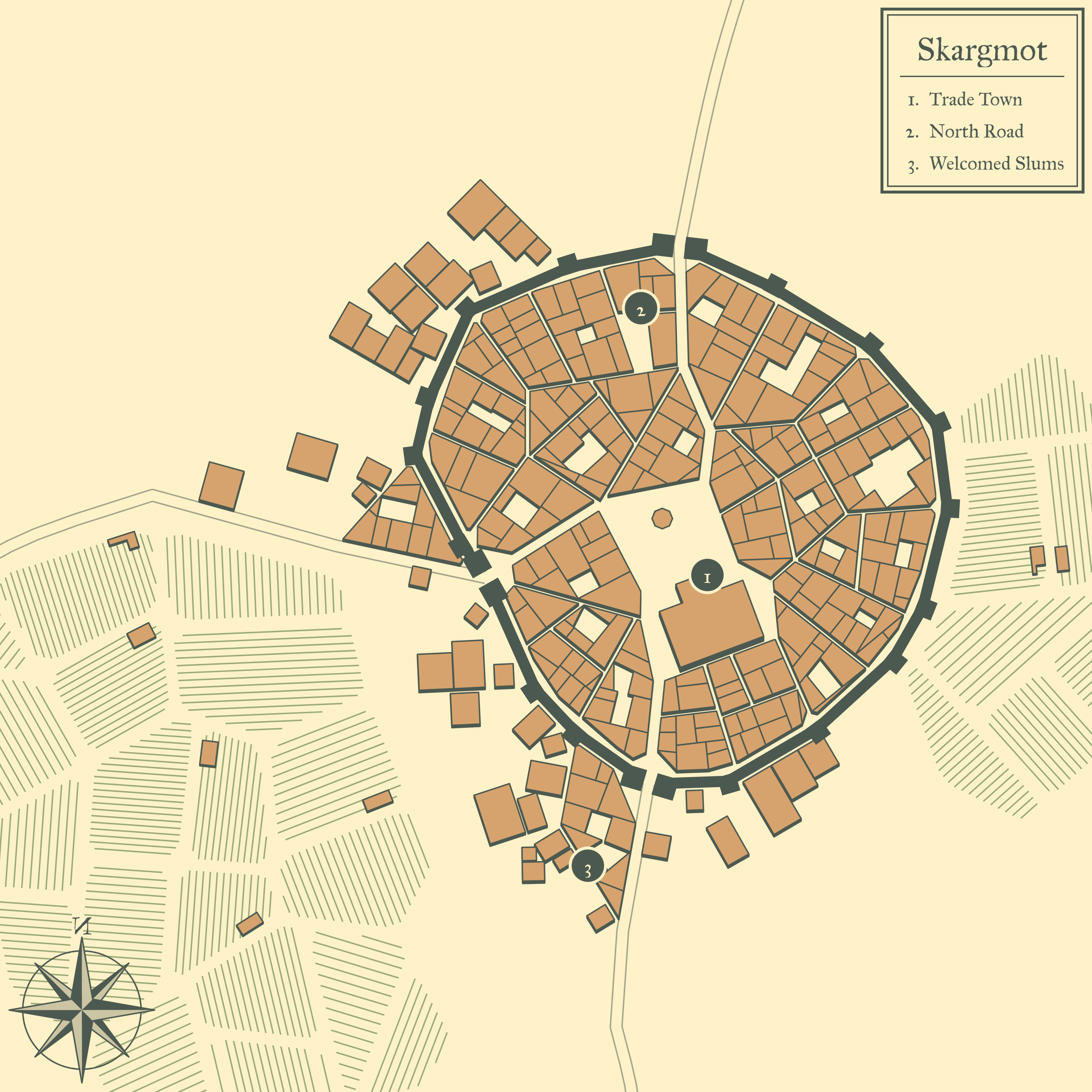 Seen as the heart and soul of Skargmot, Trade Town was once a Hobgoblin war fortress now repurposed to keep safe items and objects being held for trade. Located in the center of the city surrounded by legions of tents and carts with wares to trade and deals eager to be made.

One of the few old roads still left in Lorian that extends more than a few miles beyond the city's boarders. The North Road travels through Skargmot, past the Golden Foothills and into the Sundercleft mountains where it eventually connects to the ferry station that leads to Karz'dorm

By far the most populated section of the city proper the Welcomed Slums, also known as 'Free Home' to the locals is a made of tents, huts, carts, and cabins all cobbled together by the ever growing population of the city. To the more refined this maze of squalor is a heavy deterrent for even reaching Skragmot, but for those who have been battered, oppressed, and lived a life of struggle it is said to be a warm and welcoming new home.